“How is it possible that while the entire world is rising for justice, in Minneapolis police officers are hunting protesters and hunting individuals”? asks Jaylani Hussein, executive director of the Minnesota chapter of the Council on American-Islamic Relations (CAIR-MN). He’s referring to recently released body camera footage from the 2020 uprising in which an officer is heard saying they were going to “hunt” people now.
Jill Boogren 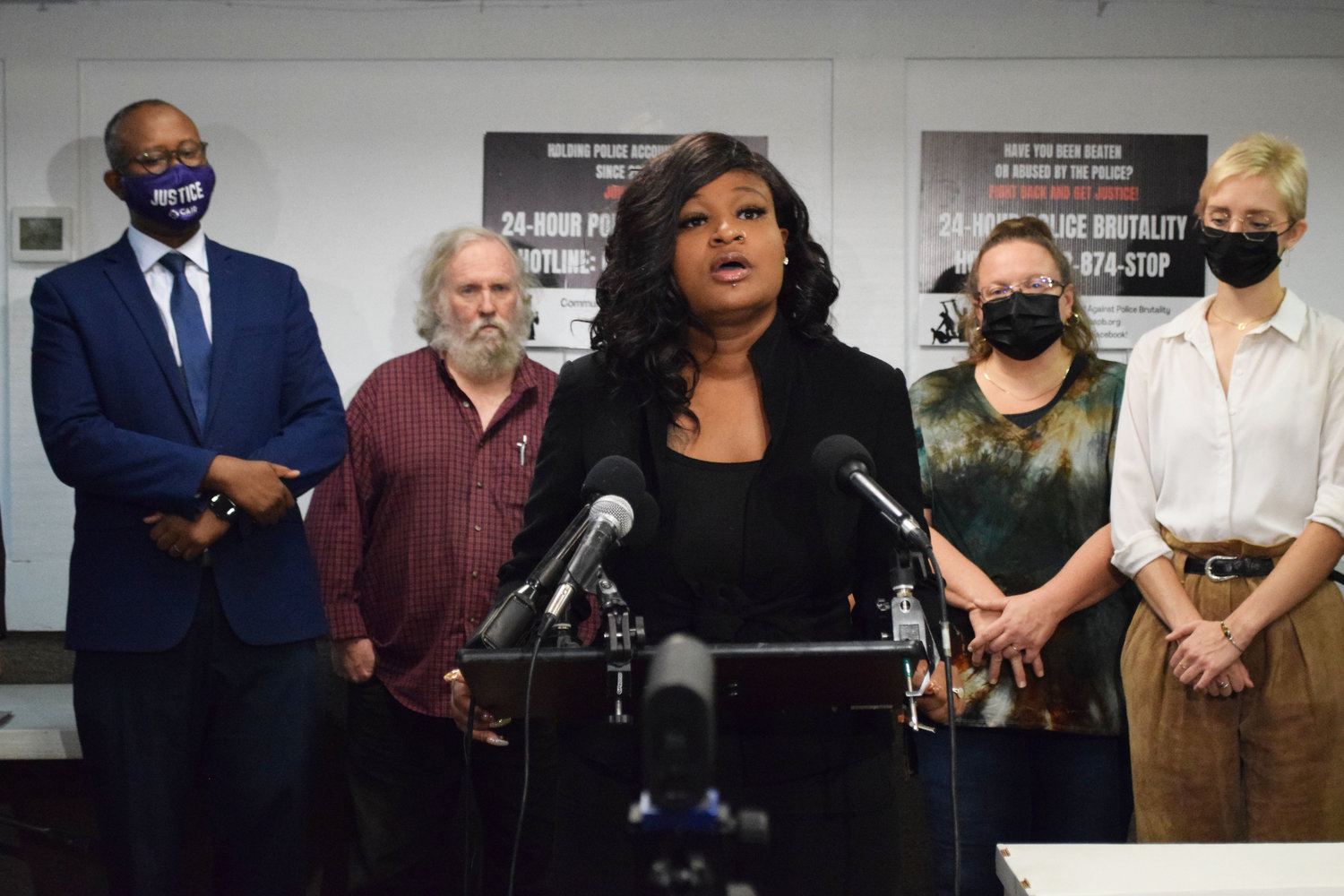 Toshira Garraway, founder of Families Supporting Families Against Police Violence and fiancé of Justin Teigen who was killed by St. Paul police in 2009, urged the DOJ to investigate the Bureau of Criminal Apprehension and other cities following its work in Minneapolis.
Jill Boogren 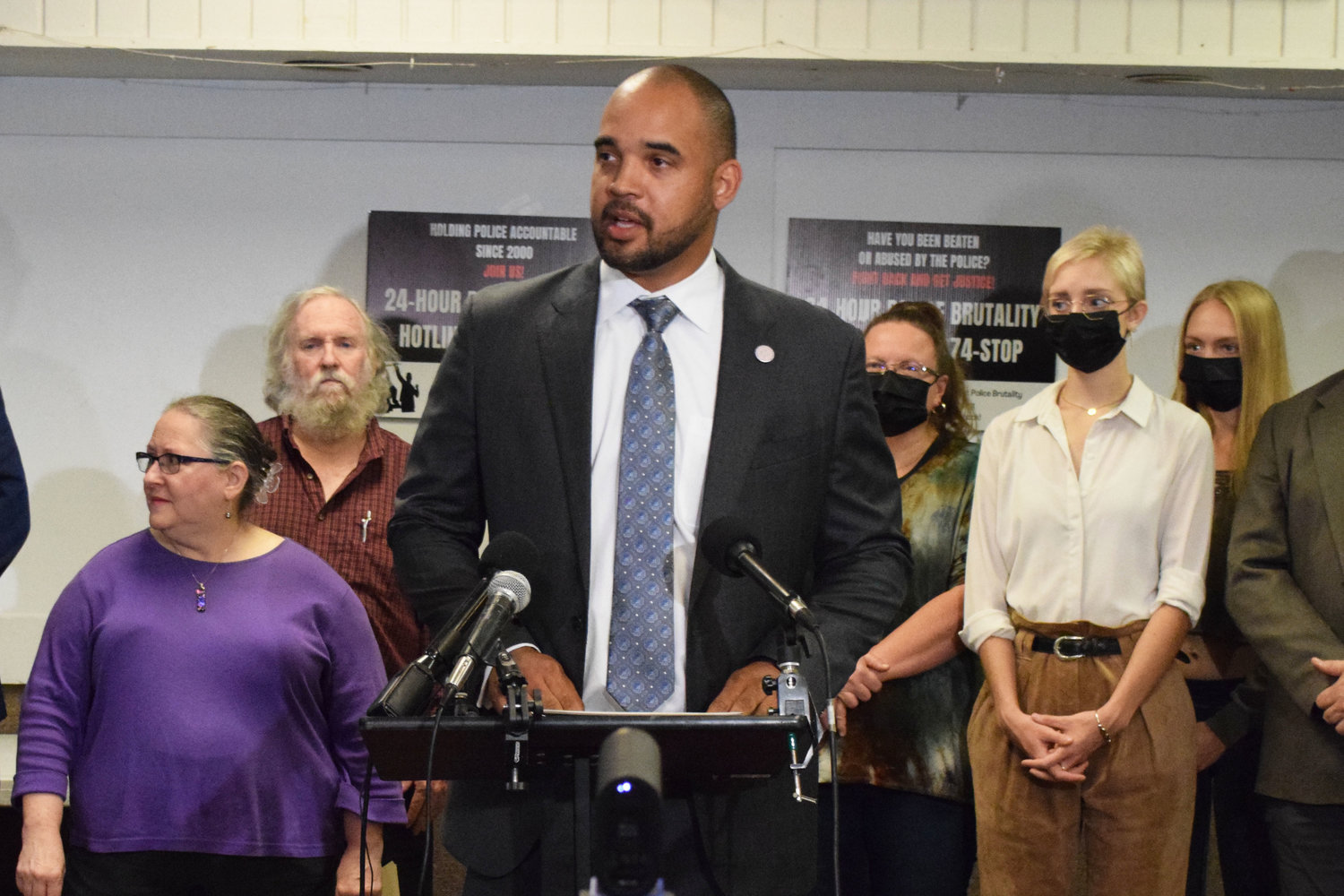 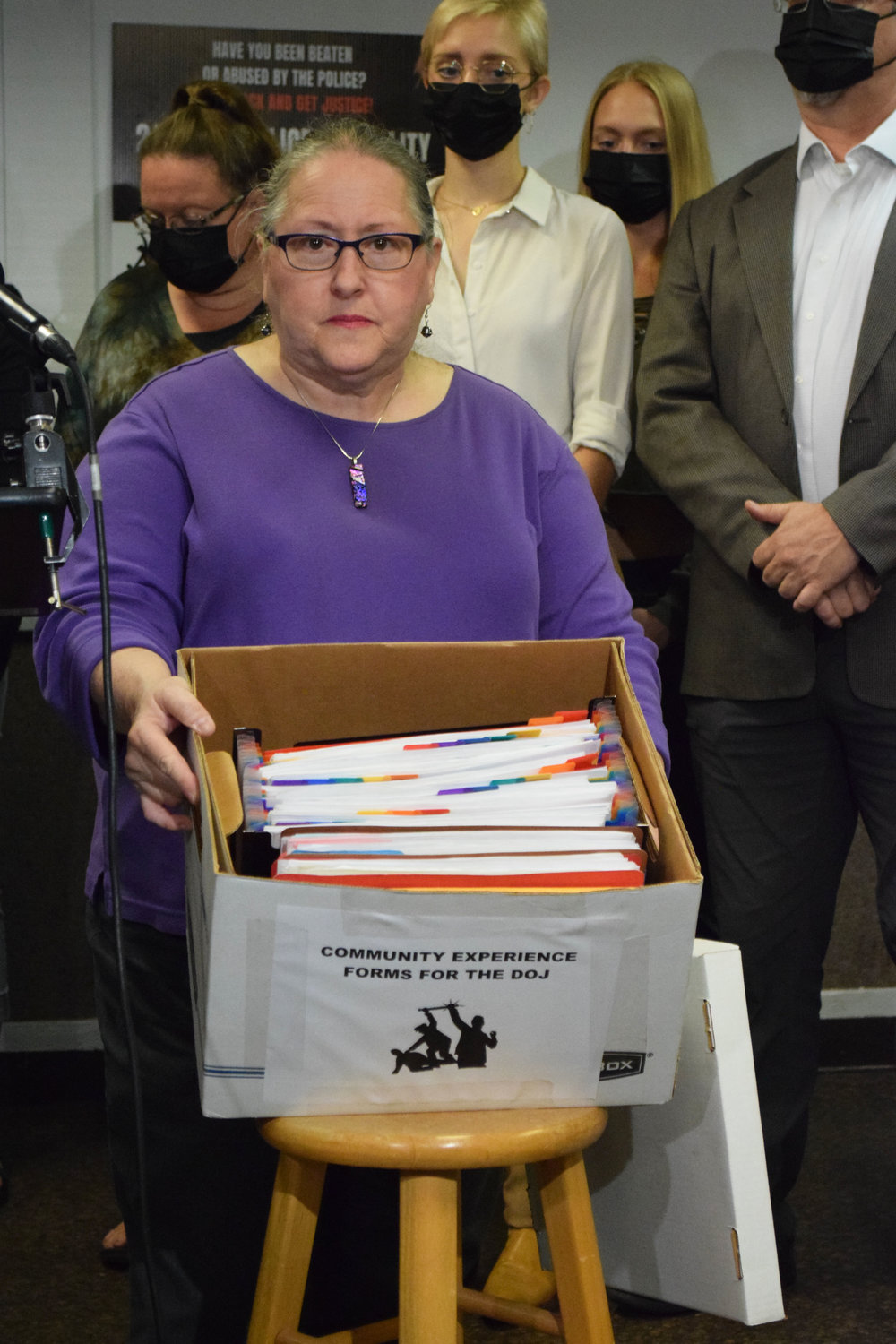 Communities United Against Police Brutality President Michelle Gross shows a box filled with nearly 1,100 stories of people’s experiences to be submitted to the Department of Justice in their ongoing investigation of the Minneapolis Police Department.
Jill Boogren 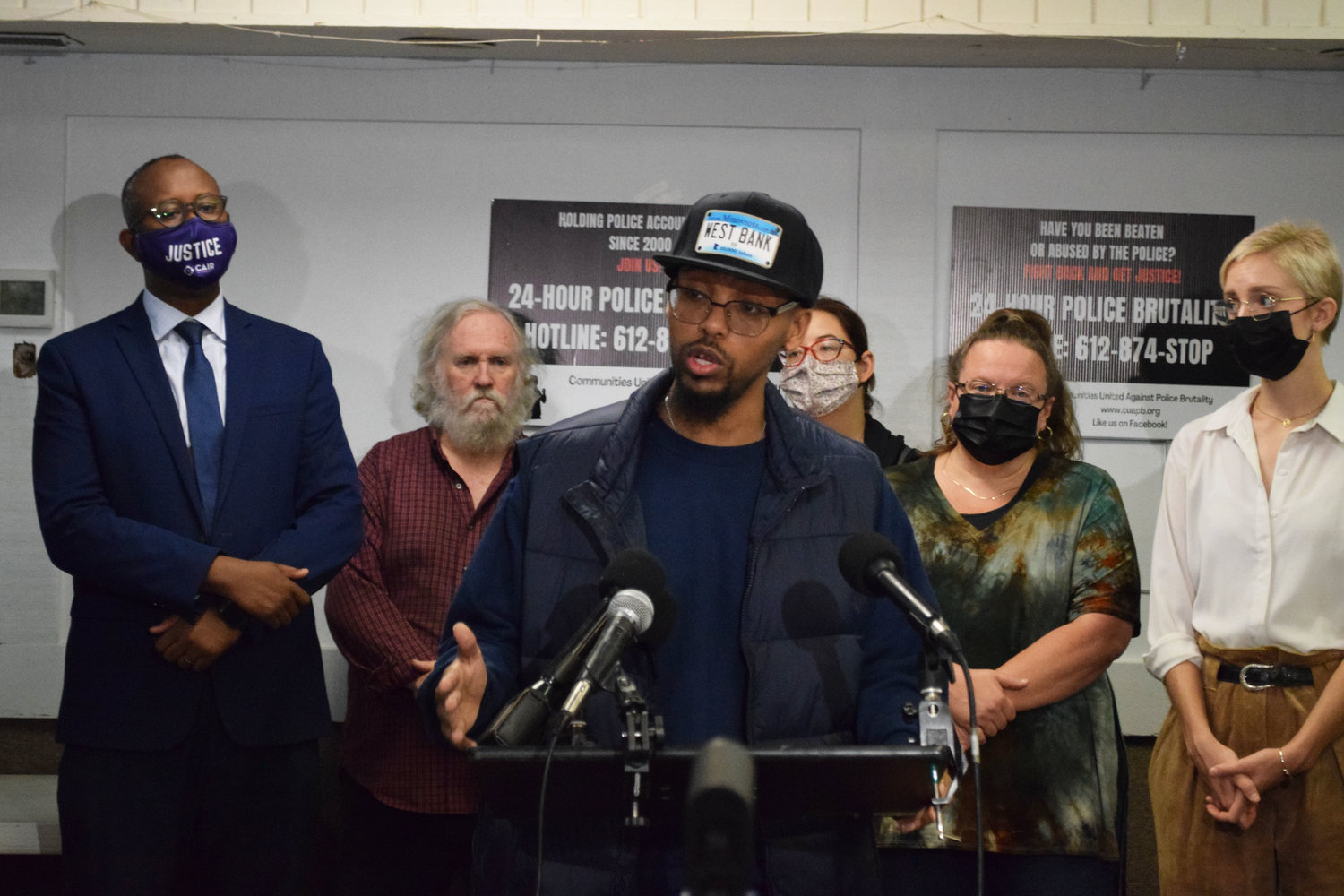 Burhan Mohumed, supervisor of their Somali canvassing team, says their job as canvassers is to get personal experiences without getting into the politics of what people think or feel about the police.
Jill Boogren 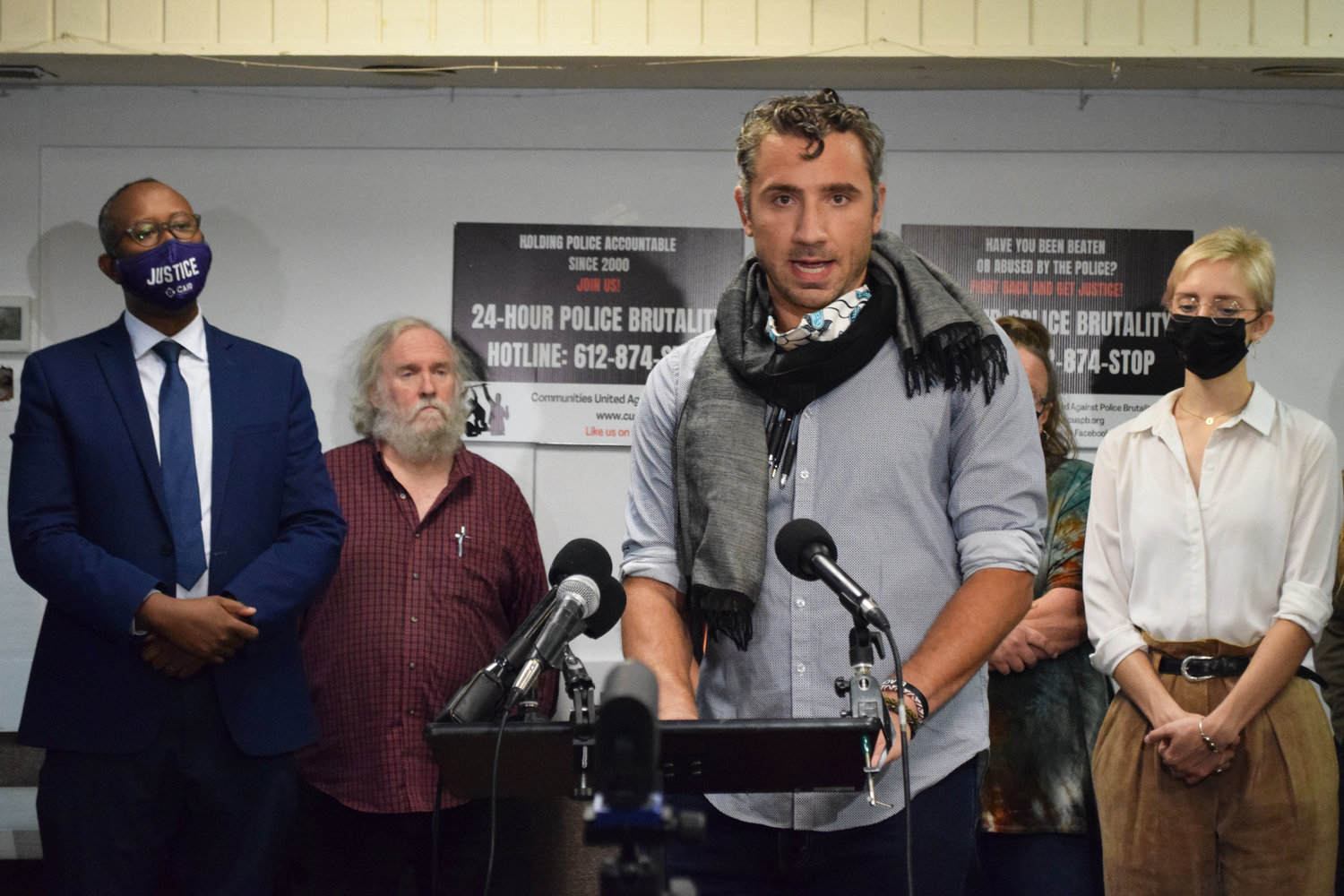 Supervisor Evan Pugh describes an increasing number of interactions with the police while out canvassing that are “at minimum questionable, at most overtly antagonistic.”
Jill Boogren
Previous Next
Posted Thursday, October 28, 2021 9:15 pm

We have for a long time ignored the cries of so many individuals who have been brutalized by our own tax dollars, and for the first time a thousand people are speaking out about clear injustice that took place in the actions of the Minneapolis Police Department.””
~ Jaylani Hussein

How is it possible that while the entire world is rising for justice, in Minneapolis police officers are hunting protesters and hunting individuals?”
~ Jaylani Hussein
By JILL BOOGREN

Standing with police accountability advocates, partners and supporters, Communities United Against Police Brutality (CUAPB) announced on Oct. 13, 2021 that they had collected 1,100 stories from people who shared their experiences with the Minneapolis police.
The effort aims to provide direct responses from community members to the Department of Justice (DOJ) as they investigate the Minneapolis Police Department (MPD). Ultimately, the outcome will be in the form of a consent decree, in which specific changes will be mandated by court order.
Over several months, CUAPB has held two dozen public events and sent 30 canvassers door-to-door in neighborhoods throughout the city to inform residents about the investigation, ask for input and provide opportunities for people to come forward with their personal experiences.
“We are extremely proud of that effort. I think it’s the most data gathering that has ever happened to find out what the community actually wants and what the community has actually experienced,” said CUAPB President Michelle Gross. “People are eager to talk about what has happened to them at the hands of the Minneapolis police.”
CUAPB is sharing these experiences – as well as documents from their extensive database, which spans the organization’s 21 years – with the DOJ and the Minnesota Human Rights Department, which is also conducting an investigation.
“We expect to have an outstanding consent decree that would fundamentally change how police operate in this city,” said Gross.

Reports of intimidation
There have been numerous reports by canvassers of harassment and intimidation by law enforcement and candidate campaign operatives. This has come in the form of “slow rolls” or being followed by police in squad cars, disinformation about the work CUAPB is doing, and removal of their lawn signs.
Burhan Mohumed, supervisor of their Somali canvassing team, said they’ve come across some reluctance by people to tell their story, and what he believes to be a deliberate campaign to mislead and misinform communities they’re trying to engage.
“It’s one thing for communities to keep a tight lip, because a lot of us are afraid of being harassed,” said Mohumed. But they’re also being met with propaganda that they’re trying to get rid of the police, which is untrue. Mohumed said their job as canvassers is to get personal experiences without getting into the politics of what people think or feel about the police.
“There are people who need to share these stories and that’s the people that we’re hopefully creating some sort of opportunity to come talk to us,” said Mohumed. He wants residents, especially within the Somali community, to know there’s a way for people to speak up if they’ve been violated by the police.
Supervisor Evan Pugh said that after canvassing for a little over a month, it felt like there was a moment when they suddenly became what he called an “item of interest.” Since then, he said, there have been an increasing number of interactions with the police that are “at minimum questionable, at most overtly antagonistic.” He mentioned an incident two days prior when a squad car rolled up behind him, startled him after taking a really loud turn, switched on its lights, then immediately turned them off after two blocks – “for no purpose whatsoever that I could see aside from making me jump.”
Pugh considers the work important, in that canvassers provide a resource for people to connect.
“There are so many families, so many individuals that have stories of quite horrific trauma at the hands of law enforcement or prison system or the jail system that really do deserve to have their stories shared but have felt very alone and haven’t known where to look for support,” he said.
CUAPB has compiled a document listing 16 incidents of harassment and intimidation of canvassers that have taken place between Aug. 13 and Oct. 11. On Oct. 1 at Bloomington Ave. and 24th St., for example, an MPD squad car drove by canvassers then circled back around, following them down Bloomington Ave. On Aug. 19 at Nicollet Ave. and 19th St., an MPD officer yelled out of his squad car window, interrupting canvassers as they were taking experiences; community members reported that the officer is known for harassing people in the neighborhood.
Johnathon McClellan, president of the Minnesota Justice Coalition, said they’ll be asking the DOJ to investigate these allegations and complaints of tampering with canvassers, as well as the possibility of taxpaid dollars being used to fund the spread of disinformation and harassment.
“Let’s not forget why we are here. The lack of trust in local law enforcement and city officials along with the murders leading up to George Floyd and the ones after, and the continuing assault on our communities, primarily of color, by law enforcement has required the Department of Justice to investigate the Minneapolis Police Department,” said McClellan. “It is important that a thorough and independent investigation bring to light any patterns of misconduct that still exist.”

‘A sheer fear’
Jaylani Hussein, executive director of the Minnesota chapter of the Council on American-Islamic Relations (CAIR-MN), said he’s experienced in conversations “a sheer fear” among communities and individuals who’ve suffered police brutality from many who are afraid to share their stories. He’s also talked to individuals who say they’ve never relied on the MPD and gave an example of a woman who said she called the police after she was assaulted only to have the officer show up the next day. Hussein called for exposure and accountability.
“How is it possible that while the entire world is rising for justice, in Minneapolis police officers are hunting protesters and hunting individuals?” he asked.
The reference to “hunting” is from the recently released MPD body camera footage from five days into the 2020 uprising made public following the Jaleel Stallings case. An officer is heard saying, “Tonight it was just nice to hear. We’re gonna go find some more people instead of chasing people around. “
“Yeah,” another officer interjects.
The first continues, “We’re going to hunt ‘em. You guys are out huntin’ people now. It’s just a nice change of tempo.”
“Yep. Agreed,” responds the second.
In another segment of the hours-long footage, an officer aiming a weapon at a group of protesters calls out “Gotcha,” which is followed by laughter, apparently after hitting someone with rubber bullets. In another segment, an officer says, “All right we’re rollin’ down Lake St. The first [expletive]s we see we’re just hammerin’ ‘em with 40s.” (According to CNN, this is a reference to the 40mm rubber bullets used).
Hussein acknowledged that change and transformation in public safety takes hard work and requires individuals to be brave and courageous.
“We have for a long time ignored the cries of so many individuals who have been brutalized by our own tax dollars, and for the first time a thousand people are speaking out about clear injustice that took place in the actions of the Minneapolis Police Department,” he said. He called for people to reach out to the traumatized and impacted communities of color who have suffered from oppression and violence.
Toshira Garraway, founder of Families Supporting Families Against Police Violence, fiancé of Justin Teigen who was brutally killed by St. Paul police in August 2009, and mother of Teigen’s now 14-year-old son, expressed support for the investigation.
“There’s been almost 500 bodies that have been stolen from the state of Minnesota at the hands of law enforcement. And we know that all these murders didn’t happen at the hands of Minneapolis police officers. But we know the investigation had to start somewhere,” she said.
Garraway urged the DOJ to expand its investigation to the Bureau of Criminal Apprehension, St. Paul and other cities throughout the state.
“George Floyd is the face of hundreds, hundreds of murders here in the state of Minnesota,” she said. “Derek Chauvin is the face of hundreds of cops that are still out there, that are still walking free, that are still on the forces, that have retired, that are at home with their families while we live without ours.”
Garraway implored community members to come forward and tell their stories, even if they’re afraid. She said that for every high profile case in Minnesota – Daunte Wright, George Floyd, Jamar Clark, Philando Castile – “there’s a hundred names behind that big name that they were able to sweep under the rug and try to keep quiet.
“These families deserve the same amount of justice that George Floyd received. And he didn’t even receive the justice that he deserved. But the rest of these families at least deserve their day in court and deserve to get their stories heard,” said Garraway. “My family deserves it, and so do the rest of these families in the hurting community.”

Submit your story
The DOJ investigation, which began in April 2020, is expected to take at least a year. In asking other communities who have had similar investigations how to ensure the best outcome, Gross said, “Universally the answer was, ‘Make sure the community is at the table.’ So that’s what we’ve been doing.”
Comments and experiences can be submitted using a form on the CUAPB website at cuapb.org or by contacting the DOJ directly by phone at 866-432-0268 or by email at community.minneapolis@usdoj.gov. 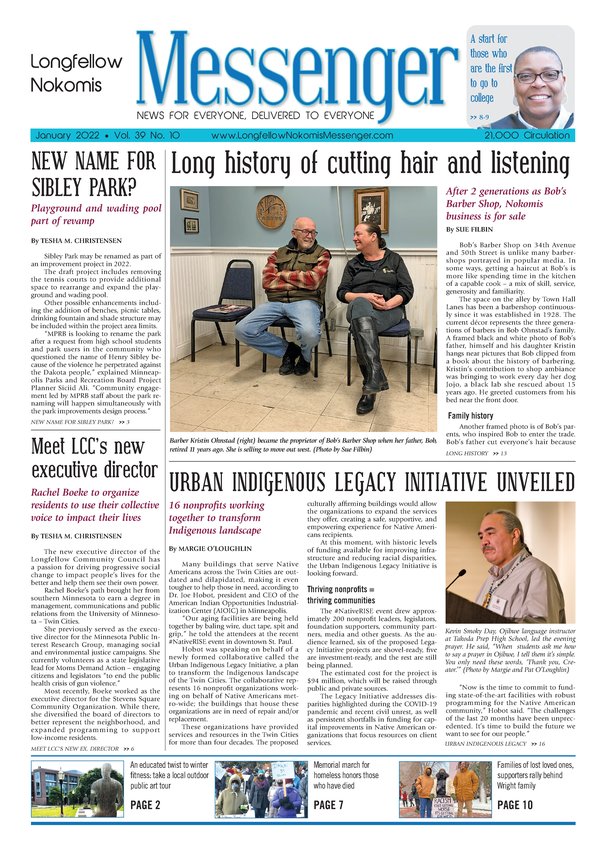