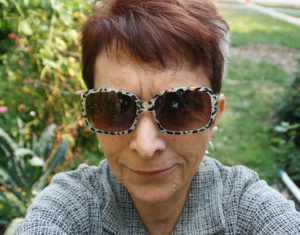 Workers begin to show up at the small grocery store in South Minneapolis in the dark, to bake the bread that will be sold throughout the day. First responders and those who might be health compromised start arriving two hours later, at 6 a.m., just as the sun is rising, to shop for what they might need.

The staff will be there to help, working in the deli and the butcher shops hidden behind the scenes, or in the front, operating the cash registers, stocking shelves and cleaning surfaces, until the store closes at 8 p.m., as the sun is setting.

When the COVID-19 virus first appeared as a health crisis, grocery stores were just a place to shop for food. But on March 25 the mayor of Minneapolis, followed by Gov. Tim Walz, ordered a lock down of all but essential services. Grocery stores were suddenly pushed to the front lines.

I now work at a supermarket, signing on partially to do my part to help with what I call ‘the war effort.’ But, part of the reason was that, on March 20, Donald Trump announced, with what was almost a throw away line, that schools could forgo standardized testing in the face of the pandemic. Few noticed, but I did. I was employed scoring standardized test essays from across the country. My job was suddenly and unexpectedly gone. What else could I do to supplement my journalism income?

I walked over to my local grocery store and asked, “Are you guys hiring?” They were. They handed me some paperwork and a store t-shirt and I was suddenly on the front lines, an essential worker.

Much of my job is walking the store with a terrycloth rag and a bottle of pink specialty sanitizer, wiping down any surface that people might touch. I also help customers find items and give advice about ingredients and cooking. 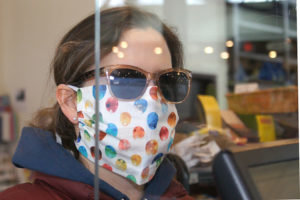 Protected by a mask, a cough-barrier and glasses. Anna Mason was covered at the Longfellow Market. Her mother made the mask.

A grocery store, it turns out, is an ideal place to see how people react to a pandemic. With a few, you can see the panic on their faces when they come in the door, acting startled if anyone gets within 10 feet of them. Most arrive trying to follow the new (and ever changing) rules. People do their best to stay six feet from other customers and staff – there are signs reminding people to do so – something difficult in a store where the aisles are narrow. For some customers, sheltering in place is difficult and they see a visit to the grocery as their daily chance to interact with humanity.

At first, hardly any customers wore masks. Now, you can see many secure their masks just before they enter the front door. The store provides customers with hand sanitizer, sanitizing wipes and thin plastic gloves to use, if anyone wants to do so.

Adjusting to the new world of a pandemic can be difficult. Some people would insist on bringing their reusable bags from home and would get upset and even hostile when asked not to do so. It was almost as if these bags were a talisman against climate change and to not use them for even a few weeks would bring disaster. The bags could carry the virus and created extra work for staff members. As customers noticed that more and more stores around the country banned the bags, and locally, stores no longer charged the five cents for paper or plastic, this became less of a problem.

Another change was when the store added an online shopping option, where staff members fill up carts of food and meet customers in the parking lot. Curbside pickup counts for only about five percent of the store’s business, only about 10 to 14 orders a day, but for those who need it, it’s an important and essential service.

Before the lockdown, many patrons ate out at restaurants or used take-out. Now, with many restaurants closed, people found themselves forced to cook. A lot of shoppers who seldom cooked decided that cooking might be a fun distraction. Those who know little about cooking now can depend on store employees for advice.

One shopper was looking for ‘regular rice’. “That’s gluten free rice,” he said looking at the package. Well, yes. All rice is gluten free. This rice will work. Another customer was looking for a specific jarred ‘picante sauce’ as an ingredient. Picante is Spanish for spicy. Any spicy salsa would work, we told him.

Some products became hard to find. Before the lockdown, few people, except for the most dedicated hobbyist, baked their own bread. Once people found themselves confined to their homes, many decided baking bread sounded fun. For a few weeks, flour seemed to disappear from the shelves and would be snatched up by the lucky customer who happened to arrive at the store at the right time.

Yeast became as valuable as toilet paper. Some people complained that people were hoarding yeast. No one was. It was simply that some once seemingly dull and easy-to-find items like yeast became in huge demand.

The toilet paper situation has a more complicated backstory. Before lockdown, people would use the bathrooms and toilets at work, school or places like restaurants, which use commercial paper made at different factories than the paper meant for home use. The lack of toilet paper was seldom caused by ‘hoarders’ but simply because the factories making the home-style paper couldn’t keep up with the doubled demand.

With the increase of business, the store hired a number of new people, including some high school students. Most employees say they are not worried about working with and interacting with the public. For some, the virus does not seem more than a vague threat to them personally and they’re happy to help with the culturally shared effort against the virus. Part of the job is to stay upbeat for the sake of customers. One employee, Andrea, is the store’s unofficial ambassador, chatting with everyone she meets and cheering them up during these stressful and difficult times.

The store is still hiring. But, even with the increasing business, the store’s manager hopes that in the future, the local economy will become a rising tide and that businesses that are now shuttered will again thrive. It’s part of a "We’re all in this together," attitude, he said.

I look out the front window of the store. It’s a sunny afternoon and customers are still arriving. I see a familiar sight in the park across the street. A man is walking his beautiful German Shepard dog for the second time that day, taking advantage of a chance to get some fresh air. Life goes on.

During the course of a four-hour shift, I’ve walked around the store more times than I can count, but my Fitbit reads 8,500 steps. The lock down might end soon – or not. But, whatever happens, most people working here are in it for the long haul, making sure everyone can have access to the food they want while staying safe. They were once just clerks but now, they are essential workers and everyone finally appreciates how much they contribute.

* Editor's note: The photo on this page is not from the same store where reporter Stephanie Fox works.