Sweep up, rake up, pick up! 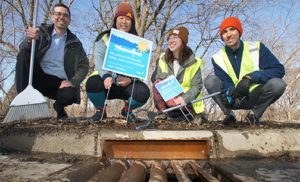 Everyone knows that trash is no good for lakes, rivers, and streams. But do you know that natural debris such as leaves, grass clippings, and pet waste also pollute the waterways? When these natural pollutants are swept into the storm water system, they end up in the nearest body of water. Eventually the organic matter will break down, release phosphorous, and stimulate the growth of algae.

The Minneapolis Adopt-a-Drain Program was created in 2016 to help address this problem. Minneapolis joined a metro-wide program when it was launched last year.

The concept is simple, and it’s working. Residents learn about Adopt-a-Drain and volunteer on the program website (www.adopt-a-drain.org). Adopt-a-Drain asks residents to adopt a storm drain in their neighborhood, and keep it clear of leaves, trash, and other debris to reduce water pollution. Volunteers commit to keeping a storm drain unimpeded. Storm drains flow directly into local lakes, rivers, and wetlands, acting as a conduit for trash and organic pollutants.

Program Manager Lane Christianson said, “2019 was a year of exceptional growth for the Adopt-a-Drain Program. We’re thrilled to report that Minneapolis is leading all cities in total participants and adopted storm drains. We had 1,561 storm drains adopted with 825 new participants last year. Most participants take care of multiple drains; some do entire intersections. We ask volunteers to sweep/rake/shovel leaves, trash and other debris off the drain surface year round.”

Volunteers can report as often as they like – but are asked to report their observations at least twice yearly, in the spring and fall via an online account. For those who don’t have access to the online system, a reporting postcard is mailed out annually. 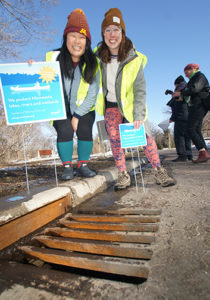 He said, “Only the surface of the storm drain grate and the area around it should be cleaned. Do not remove the grate or otherwise attempt to clean inside the storm drain. If your drain is plugged, contact the city of Minneapolis at 311.”

As part of the job, waste is separated and placed in the appropriate trash, recycling, or compost carts at the volunteer's home. Note that sediment or dirt collected in the spring is not compostable, as it likely contains chemical residue from deicers used over the winter and motor oil. Bag it, and put it in the trash.

Once these pollutants get into the storm water system and start to decay, organic matter releases nutrients (phosphorous is the biggest culprit) that feed algae and invasive plants.

When lakes get covered with algae, sunlight can’t reach the bottom and desirable plants start to die off. In the long term, the ecosystem changes so fewer aquatic animals, fish, and native plants can survive.

Christianson said, “It doesn’t take a lot of time to clean a storm drain, and it makes a big difference collectively. Volunteers like Mandy LaBreche, who recently adopted the 10,000th drain through our program, are eager to do something that makes a positive difference in improving local water quality.”

Minneapolis participants receive a yard sign that helps spread the word about this volunteer program. For more information or to adopt-a-drain of your own, go to www.adopt-a-drain.org.