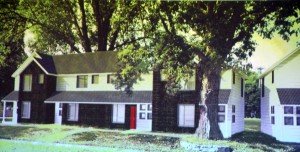 Sixteen affordable-housing townhome units will be built next year at E. 54th St. and Riverview Rd. in the Morris Park neighborhood.

(Photo right) Four buildings, with four units each, are included in the preliminary site plan for E. 54th St. and Riverview Rd. The two-story townhomes will be owned by the Minneapolis Public Housing Authority, and will help young families transitioning from homelessness.

According to Dean Carlson of Minneapolis Public Housing Authority (MPHA), the units will be offered to young families that have recently been homeless.

The average age of the adults are 18 to 24, and the children are typically under age 5.

There are over 6,200 families on the MPHA wait list, with wait times ranging from three to seven years. In 2015, nearly 1,300 families sought refuge in a shelter in Hennepin County. 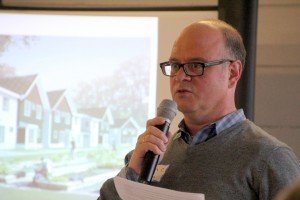 (Photo right) According to Dean Carlson of Minneapolis Public Housing Authority (MPHA), the units will be offered to young families that have recently been homeless. The average age of the adults are 18 to 24, and the children are typically under age 5. (Photo by Tesha M. Christensen)

The new townhomes will be built on land that is currently owned by the city of Minneapolis, land that was cleared of two-story single-family houses by the Minnesota Department of Transportation in preparation for widening Hiawatha Ave. years ago.

The development is adjacent to Riverview Senior Apartments.

Kat Vann served on the original task force that worked with Beacon Interfaith Housing Collaborative to construct the affordable senior housing building. At the time, the task force envisioned adding affordable housing for families next door, she recalled. Vann is delighted to see that happening now.

“It’s so inspiring to me,” Vann said.

Ward 12 Council member Andrew Johnson pointed out that a community garden is planned for the backyard of the townhome area. “I see it as a great way to bring the seniors together with the young families,” he remarked.

The plan for the townhome development was presented to neighborhood residents during a meeting at Morris Park Recreation Center on Tue., Mar. 22. The event was organized by the Nokomis East Neighborhood Association and Council Member Andrew Johnson.

(Photo left) About 30 residents gathered on Mar. 22, to learn about the affordable housing development the city is pursuing at E. 54th St. and Riverside. (Photo by Tesha M. Christensen)

The city received four proposals for the site, and a review committee evaluated them according to how well they met development objectives. Among those on the committee were NENA Executive Director Becky Timm and Johnson’s Senior Policy Aide Suzanne Murphy.

Two of the proposals included large, multi-story buildings, something that neighborhood residents had said they didn’t want during a meeting held last September, pointed out Johnson.

The majority of units in the development will have two or three bedrooms, and one will have four bedrooms, pointed out architect Paul Mellblom of MSR Design. One will be handicapped accessible.

There will be a total of four four-unit buildings. The two-story-tall buildings will not have basements.

Each unit will have a front and back porch. In the back of the buildings there will be a play area, small shed, and community garden. 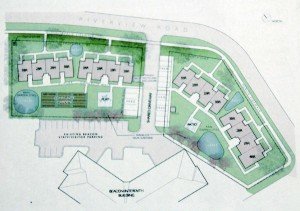 (Photo left) The townhomes will range from two to four-bedroom units. Public benefits include a community garden and play structure. (Illustration provided)

The plan is to keep as many trees on the site as possible and to plant shrubs to screen the back of the development from the Riverview Apartments. Rain gardens will be disbursed around the site to manage stormwater, said Mellbloom.

MPHA will handle outside maintenance and lawn care.

Small dogs will be allowed with a deposit.

Units will be inspected by the Department of Housing and Urban Development (HUD).

Residents will pay 30% of their income for rent, with a minimum of $75 a month.

Through the Stable Families Initiative, job training and education will be provided to residents to raise income and increase self-sufficiency, pointed out Mikkel Beckman, who is a shared Minneapolis and Hennepin County employee. Residents will also receive training on basic home maintenance, such as how to change a light bulb and whether something is best suited for the sink garbage disposal or the trash can.

Carlson pointed out that MHPA operates 6,000 public housing units, and works with neighborhood organizations both during the development process and once a unit is occupied. A property manager will handle any complaints from residents or neighbors.

Too many cars on Riverside

There will not be any garages at the site. Instead, sixteen uncovered parking spots will be provided along the roadway that leads into the Riverview Apartment building, one for each unit.

Some attendees at the meeting expressed concern about the number of parking spots.

“I’m very concerned about the parking on Riverside,” said local resident Greg Lemay. “We want our neighborhood to be as safe as it was before. I don’t see that happening.”

Carlson responded that MPHA manages 750-scattered-site housing units, and on average there is less than one car per unit.

Council member Andrew Johnson added that $1,000 for a used car is a massive expense for a family that has recently been homeless. It’s the site’s proximity to the lightrail station at the VA that makes it beneficial for an affordable housing project.

Hiawatha Lane resident Ileen Johnson pointed out that while the residents may not have more than one car, their visitors will all be parking on the street.

Riverview Apartment resident Jean Haworth appreciates the “no parking” signs that were put up following the September meeting, and said that the parking situation has been better when people obey the signs.

Parking in the area is complicated by its proximity to Minnehaha Park, which is located a few blocks to the west.

Neighborhood residents have until Apr. 22 to submit comments to the city’s community planning and economic development (CPED) department. They can be funneled through NENA or council member Andrew Johnson’s office.

The city council is expected to award exclusive development rights to MPHA in late May, and finalize construction drawings in February 2017. Construction will be complete by July 2018, and units are expected to be fully occupied by August 2018.