‘The time is now’ for solar power, according to co-owner Michael Allen 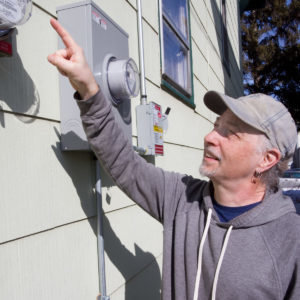 Richard Franco has an exterior Smart Meter that measures his home energy use in 15 minute increments. He also gauges his family’s energy consumption (and availability) using an indoor meter and a smart phone app. (Photo by Margie O’Loughlin)[/caption]

The numbers are in. The U.S. Department of Labor’s statistics predict that over the next decade, solar installer jobs will grow more than any other occupation.

All Energy Solar is a company in the Midway that designs, installs, and monitors solar power systems for homes and businesses – and they’ve been doing it for 10 years. Their new, expanded headquarters in Energy Park made it possible for the company to stay in St. Paul during a time of significant growth.

The solar energy industry is booming, which is good news for the environment and for the economy. The jobs that are produced can’t be outsourced or done by robots – the work has to be done by local people.

President and co-owner Michael Allen said, “Last year, we installed more than 1,000 solar power systems. This year, our goal is 1,250 installations. While our company has a six-state reach, the lion’s share of our business is right here in the Twin Cities.”

‘They did the heavy lifting’

Richard Franco was an All Energy Solar customer in 2019; he had 12 solar panels installed on his home last spring. He said, “I’d been interested in solar panels for a while. There were tax credits and rebates in place, it seemed like a hedge against energy costs continually rising, and, of course, there are the obvious environmental benefits.”

Franco had seen signs for All Energy Solar in his neighborhood, and appreciated that they were a local company. When one of his neighbors had solar panels installed by All Energy Solar, Franco knocked on his door. The neighbor described his experience as extremely positive, and Franco’s would turn out to be as well.

In Franco’s words, “They came out and evaluated everything, determining that my steeply-pitched, south-facing, relatively unobstructed roof was perfect for solar panels. They did all the heavy lifting, and got the logistical stuff set up with Xcel Energy. While I was making sure my homeowner’s insurance would cover solar panels, All Energy Solar didn’t pressure me in any way.” 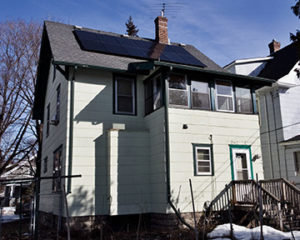 Richard Franco’s home as seen from the back yard. His 12 solar panels generate between 20-24 kilowatt hours on a sunny day. On a typical day, his family uses between 5-7 kilowatt hours. The surplus is sold back to Xcel Energy for .08 cents/kilowatt hour.(Photo by Margie O’Loughlin)[/caption]

Michael Allen was working in the solar energy industry for 10 years before he started All Energy Solar with his brother Brian a decade ago. He said, “It’s easy enough to buy a solar energy system over the internet, but it will likely end up costing you more in the long run. We believe that individual attention is essential for having a system work optimally. If it isn’t installed properly, it might not be up to code or pass the insurance inspection.”

He added, “We model every home or business we work on in 3-D imaging, and interpret exactly how the panels will be integrated with smart, efficient design. There are trees and structures that get in the way of the sun. If the south side of a property is shaded, maybe the panels will have to be placed on the east or the west.

“Our consultants are highly skilled at at site design, and every site is different.”

All Energy Solar helps homeowners choose a system that is appropriate not only to their site, but also to their energy needs. Energy use is evaluated on a 12-month cycle, and those numbers inform the design of each solar power system.

Community solar gardens are growing in popularity, and Allen supports the idea – to a point. He explained, “When you look at it carefully, it’s a continuation of the idea of renting electricity. Somebody builds a solar garden in an outlying area, pumps a lot of energy into the grid, and customers get a slight credit on their Xcel bill.”

He believes the motivation for installing a home solar energy system is the same as what gets people to buy, rather than rent, their home. It’s empowering to generate your own electricity -- and it’s a sound investment.”

‘The time is now’

According to Allen, the technology of solar panels hasn’t changed much over time. They use the same technology developed by scientists at Bell Laboratories in 1954. What has changed tremendously in the inversion technology that converts DC (direct current electricity collected from the sun) into AC (alternating current electricity that can be used in the home).

Solar panels typically come with a 25-year warranty. Once they’re installed, they are relatively maintenance free. There is no need to keep them clear of snow and ice. The panels are dark colored, and will clear themselves on their own. Allen said, “Don’t go up on your roof to check on them!”

The solar industry is a global industry, with the U.S. being – so far – a very small part of the market. According to Allen, “Not even 2% of the energy used in this country comes from renewable sources. Collecting energy from the sun is a simple, safe technology that we just haven’t adopted in a big way. We have the opportunity to move forward with the Green Economy in this state and in this country, and revolutionize our infrastructure to be truly renewable. All of the technology is ready. The time is now.”

For more information on installing solar panels on your home, or to learn about job opportunities with All Energy Solar, visit www.allenergysolar.com.

“We’re proud to be part of this economic sector based on renewable energy. With Governor Walz calling for statewide carbon-free energy by 2050, awareness of the benefits of solar energy

will continue to grow.”

If you install a solar panel system in 2020, 26% of your total project costs (including equipment, permitting and installation) can be claimed as a credit on your federal tax return. If you spend $10,000 on your system, you owe $2,600 less in taxes the following year. The solar tax credit will be less in 2021, and will expire in 2022.