Community healing mural is first to go up at George Floyd Memorial site on Chicago and 38th Ave. 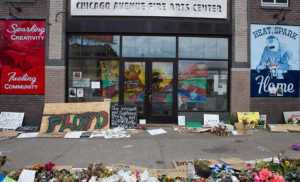 When artist and community activist Christopheraaron Deanes heard about George Floyd’s death, he went right to 38th St. and Chicago Ave. – but he didn’t show up empty handed. He came fully armed with art supplies, including a huge roll of canvas donated on-the-spot by Wet Paint in St. Paul.

He and his wife, arts administrator Cara Deanes, had reached out to the Chicago Avenue Fire Arts Center (CAFAC): a non-profit devoted to art forms produced by heat, spark, or flame and located steps away from the memorial site. They offered their space for whatever might come, trusting that something creative and engaging would emerge to support the community.

As it turned out, there would be heat, spark, and flame aplenty. Lake Street began to burn on Tuesday night, but the memorial site near where George Floyd was killed would remain almost completely undisturbed.

Christopheraaron and Cara Deanes knew how important it was to make a way for people to express their pain, frustration, and anger through art. They unrolled the nine-foot-wide piece of canvas and attached it to a fence at CAFAC.Christopheraaron made a loose sketch of an African American man with his arms outstretched – surrendering. Community members were invited to join in, painting, writing, touching the canvas.

Christopheraaron and Cara Deanes are Director and Coordinator for the ROHO Collective. Roho is a Swahili word meaning soul or spirit. The mission of the collective is to embrace, support and nurture artists of color. The artists involved strive to have a positive impact on the Twin Cities by making art that is a powerful force for unity, empowerment, and change.

Christopheraaron said, “The messages people painted helped them deal with the trauma they experienced and the internal turmoil we all felt from the murder of George Floyd. Everybody saw those last moments of his life over and over again. It took a lot of humanity away from us.”

The Deanes would return to the memorial site many times. When Christopheraaron was there on June 8, he said, “It seemed like the art community had really expanded. The names of people murdered by police were painted on the street, and those names went on and on. I was reading them slowly to my eight-year- 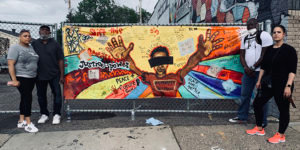 Roho Collective artists, along with members of the community, came together in peace and unity at the Chicago Avenue Fire and Arts Center to paint this dedication to George Floyd. Left to right: Cara Deanes, Christopheraaron Deanes, Sean Phillips, and Stephanie Morris-Gandy. (Photo submitted)

old daughter, one by one, and I started to cry. It broke my heart.”

Christopheraaron continued, “I felt like the healing process was starting for me, too. This is how we experience the power of healing through art; we believe it is with full engagement of our senses.”

“What does healing from trauma look like? For me it looks like people of color rallying: making statements and poignant gestures in the community. What does it sound like? It sounds like the ring of my white colleagues calling and texting to ask, ‘What can I do now?’ What does it feel like? All of the smiling, and crying, and laughing, and shouting – it feels like empathy and action are growing.”

When Christopheraaron first arrived at the memorial site on May 26, lugging paints and a blank roll of canvas, he said, “I had no idea what I was going to paint or what was going to happen. My wife Cara, who knows me so well said, ‘Just do what comes out.’ Hundreds of people participated in the mural making, and put the mark of their hands on the canvas. Tens of thousands of people have seen the community mural by now.”

He said, “Creativity isn’t a matter of the haves and have-nots. It isn’t the privilege of the young or a luxury of the old. It is an essential piece of humanity. Through art, we aim to empower everyone to changes their lives – and change the world.”

For more information on the Roho Collective and the work of Christopheraaron Deanes, visit www.rohocollective.org. The community mural at Chicago Avenue Fire Arts Center will remain up indefinitely, until the Floyd Family collects it for their personal archives.