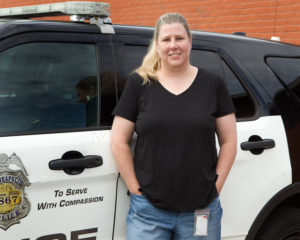 The Fifth Police Precinct is the nearest precinct building to the Longfellow and East Nokomis neighborhoods, since the Third went up in flames last month. Inspector Amelia Huffman commands the Fifth Precinct, and said, “The days following the killing of George Floyd were the saddest of my 26-year-career with the Minneapolis Police Department.”

Huffman expressed deep concern over the current state of the city, and feels the tension is fueled by focusing on differences. She said, “At the end of the day, we need to get to know each other as human beings. Before a police officer puts on a uniform, he or she is just a person.”

Toward the goal of fostering understanding, Huffman said she and her staff are making themselves available to participate is small group discussions with residents of the Fifth Precinct. She doesn’t think large group forums are effective at times of such heightened tensions. She said, “If you’re having a few neighbors over for a socially distanced get together in the yard and want to have a conversation, we’d love to join you. Let’s get to know each other better.”

Inspector Sean McGinty is in charge of the Third Precinct, albeit without a building. He is also available to attend backyard conversations of this kind. He said, “I am not afraid to have difficult conversations. The entire city is reeling from this tragedy, and the Third Precinct most of all. I would love to share from a leadership perspective, and to answer any questions that I can.”

Both inspectors Huffman and McGinty are interested in small group gatherings in safe, backyard environments. What they envision is very different from the interactions of old when police officers would visit neighborhoods on National Night Out and let kids sit in their squad cars. This would be a chance to talk in depth with knowledgeable officers about neighborhood concerns and the changing state of the police experience in Minneapolis.

It i is a good-faith effort to build bridges across the chasm of misunderstanding that exists between law enforcement and the community at large.