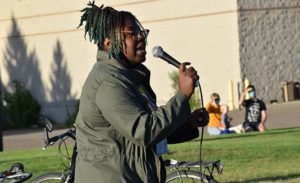 Hundreds of people gathered in a parking lot on the 2600 block of Minnehaha Ave. on Sept. 16, 2020 to protest city council plans to lease an adjacent space as temporary Third Precinct police offices. But what began as a Block the 3rd Precinct Block Party became the “Blocked” Party as news spread that negotiations between the city of Minneapolis and Lothenbach Properties had ceased.

The event was celebratory, with free food, art making, vendors and music by DJ Jacques of Douala Soul Collective. But the message - painted on signs and worn on face masks - was clear: a new police station was not welcome here.

Neighbors organized after first hearing only a couple of weeks prior about the council’s plans to spend more than $4 million on a multi-year lease and renovation of the space.

“That ain’t right,” said Emcee Robin Wonsley, an organizer with Seward Police Abolition and Twin Cities DSA, in her opening remarks. Cheers erupted into a huge applause when she told the crowd the deal with Lothenbach was off the table. “That property won’t be housing police because of you.”

At issue is the city making investments within the current model of policing, especially before taking the year to engage the public in reimagining public safety in the city, as the council committed in June to doing. Community leaders shared their visions for moving forward. 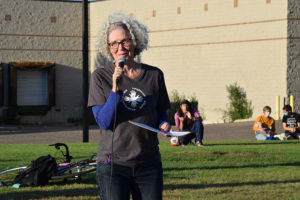 According to Seward Longfellow Restorative Justice Program Director Michele Braley, there’s been no apology nor an effort to make amends, which is the baseline for beginning a process of restorative justice and reconciliation. Rather than wait for the police department to take those steps, though, Braley encouraged the community to work together to build a more restorative city. She appealed to white people to recognize their complicity in the harm caused by the police department – for example, by calling 911, or labeling as suspicious any Black and Brown person on the block you don’t recognize, or in making light of your own past or present law breaking behavior “because we know as white people we usually get away with it.”

“ been complicit in a system that labels youth of color criminals while viewing similar behavior by their white peers as mistakes in judgment,” said Braley. “There will be no restorative justice until all youth – all people – who break the law are treated equally.” 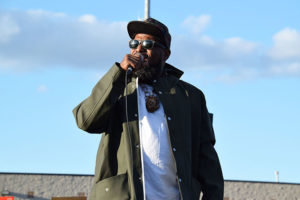 Representing Reclaim the Block, activist Truth Maze voices a need to create a “people’s budget” based on the resources they need to feel safe.[/caption]

Representing Reclaim the Block, activist Truth Maze spoke of the need to push the city to change where public money goes and support new ways of keeping each other safe.

“We believe in defunding the police. And our long-term vision is building a city where we don’t have a police department because we will not need one,” he said. “They keep murdering Black people. We need to take away their resources and put those resources back into our communities instead of giving the Minneapolis Police Department a raise every year.”

Reclaim the Block is gathering with neighbors across the city to talk about and develop a “people’s budget” based on the resources they need to feel safe, including housing, mental health care, violence prevention, trained conflict mediators, addiction resources and programming for young people. “All of which the police cannot supply,” said Maze. 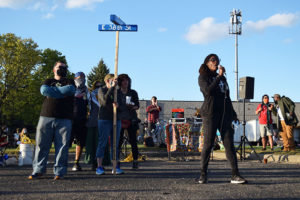 Standing with fellow community members from George Floyd Square, spokesperson Marcia Howard demonstrated how they, as citizens in protest against the city for the murder of George Floyd, are already practicing community-based public safety.

“For 100 days we have redefined what community safety looks like. And you know what we found? Community brings safety,” said Howard. In the Square, also known as the autonomous protest zone, they process car accidents, interpersonal conflict, missing items, and, if somebody does something harmful, “we talk to them.” She described an incident wherein someone defaced a mural at the Square:

“Notice we didn’t beat him down. We didn’t kneel on his neck. We talked to him. Because that’s what we do in our community. We talk,” Howard said, and suggested community safety, policing and apprehension are going to look markedly different after this.

Community leaders at the Square are currently in negotiations with the city and maintain that they will not cede 38th St. or Chicago Ave., still closed to through traffic by barricades placed by the city, until demands for justice from Resolution 001 are met (bit.ly/georgefloydsquare-a). Howard closed her remarks as she opened them, with a chant: “No justice, no street.” 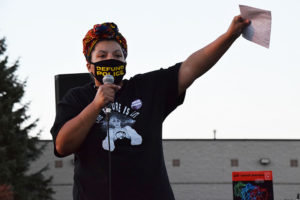 Julia Johnson, field manager at Black Visions, speaks against the racism and oppression that still exists throughout society.

Julia Johnson, field manager at Black Visions, introduced herself as a proud, Black, queer mother, a recent transplant from Pittsburgh, Penn. According to Johnson, her family was run out of town in 1981 by the Klan, the head of which was the local sheriff.

“My family had to flee in the middle of the night, or they were going to be assaulted and murdered by the Klan,” she said. “So when people ask me why I’m out in these streets… it is because racism still exists. It is because the system of oppression still exists.”

She urged people to look to the time of their own ancestors, long before powerful European nations began subjugating the rest of the world. 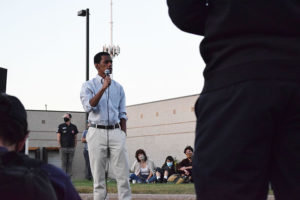 Building a new precinct in Seward or any other neighborhood can not reform a systemically racist police department,” said Seward Neighborhood Group Board Member Tiger Worku, who spoke on his own behalf. “Only community engagement, policy and true equity can do that.”

He cited the lack of transparency and accountability as key reasons he chose to speak out.

“Community members were not brought into the negotiating process. We weren’t given a seat at the table,” he said. “And the city of Minneapolis failed to respect our existence.”

Councilmember Cam Gordon, in whose ward the building is located, shared similar concerns when the matter was discussed by the city council’s Policy & Government Oversight Committee on Aug. 28. Gordon moved, successfully, to delay action. After meeting with community members, he drafted conditions upon which his approval of the lease would depend and presented them at the Public Health & Safety Committee, on Sept. 10. 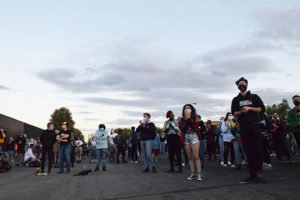 “I’m at that realm that we go to at times when our biggest concerns rise to the level of the will of the people and the consent of the governed,” he told committee members. One of the conditions he put forth addressed repairing and healing the relationship the community has with the police. When the idea was deemed unachievable within the process of searching for space, Gordon withdrew his support. “Many people feel profoundly harmed. There are systemic deep-rooted problems and injuries, and we need to take the time to heal.” 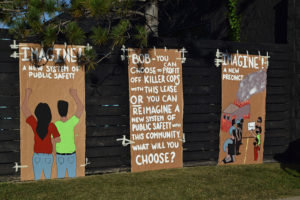 Art created by local young artists as a challenge to Bob Lothenbach, founder of Imagine! Express, the site of the proposed precinct building. Arts include @ccg.jpg, @egriz and more who have chosen to remain anonymous.

In the same meeting, other council members noted that no one had spoken to them in favor of the building proposal and echoed concerns about lack of community process. Third Precinct police have been operating out of the Convention Center after the station was burned in May.

Check out Abolition Open Mic, hosted by Reclaim the Block, on Oct. 6, taking place as part of Night Out for Safety and Liberation.