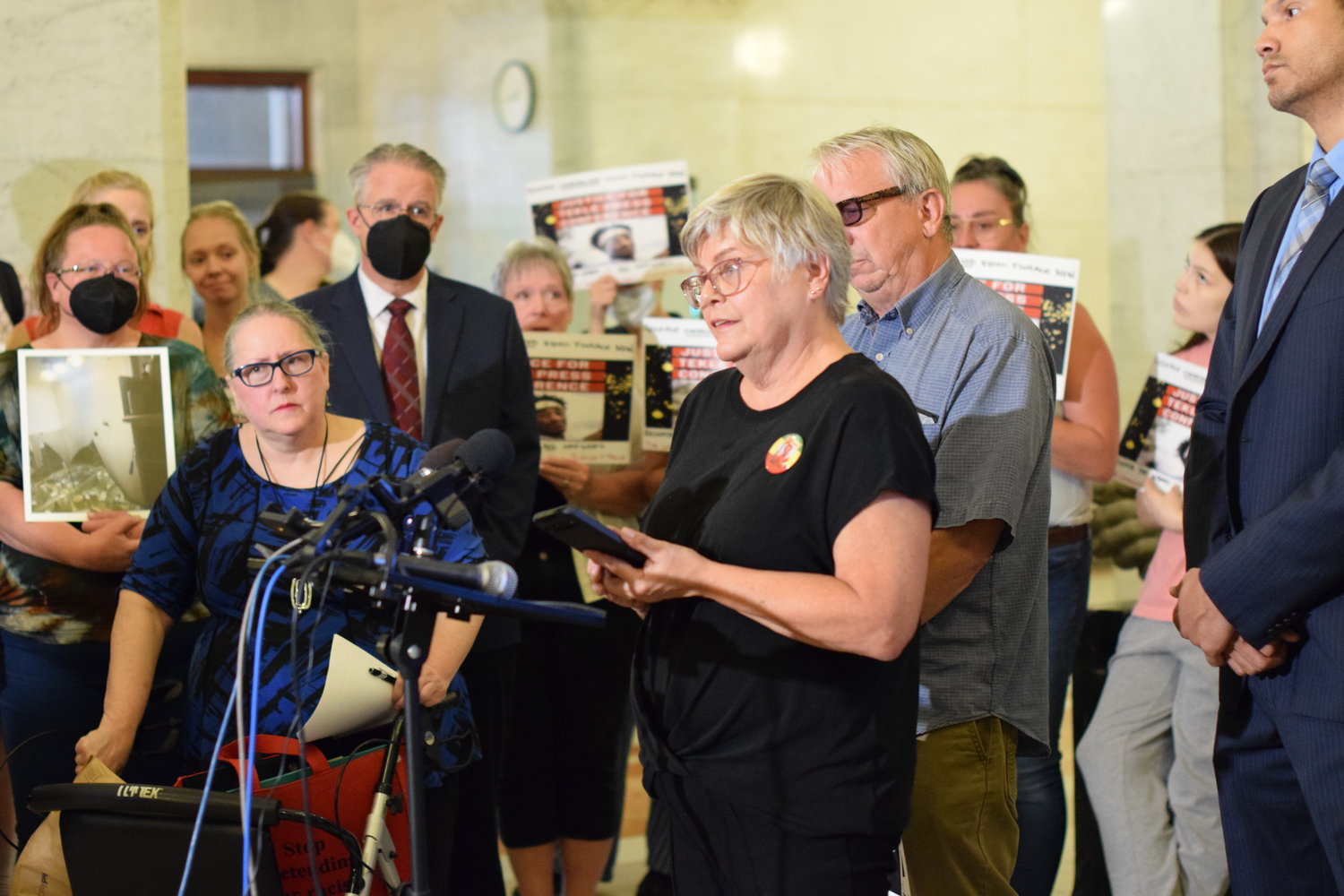 Cindy Sundberg (above) and husband Mark Sundberg are asking the city to release all available video footage from the night their 20-year-old son was killed by bullets from snipers with the Minneapolis Police Department. Tekle Sundberg lived in an apartment building at 904 21st Ave. South in the Seward neighborhood, and was killed July 14, 2022 while experiencing a mental health crisis. Bystander footage shows Sundberg the moment he was shot, six hours after the standoff began. His family was not allowed to go inside to talk to him although they were present and were there when he was shot by Aaron Pearson and Zachary Seraphine at 4:18 a.m. Mental health professionals were not called to the scene. (Photos by Jill Boogren) 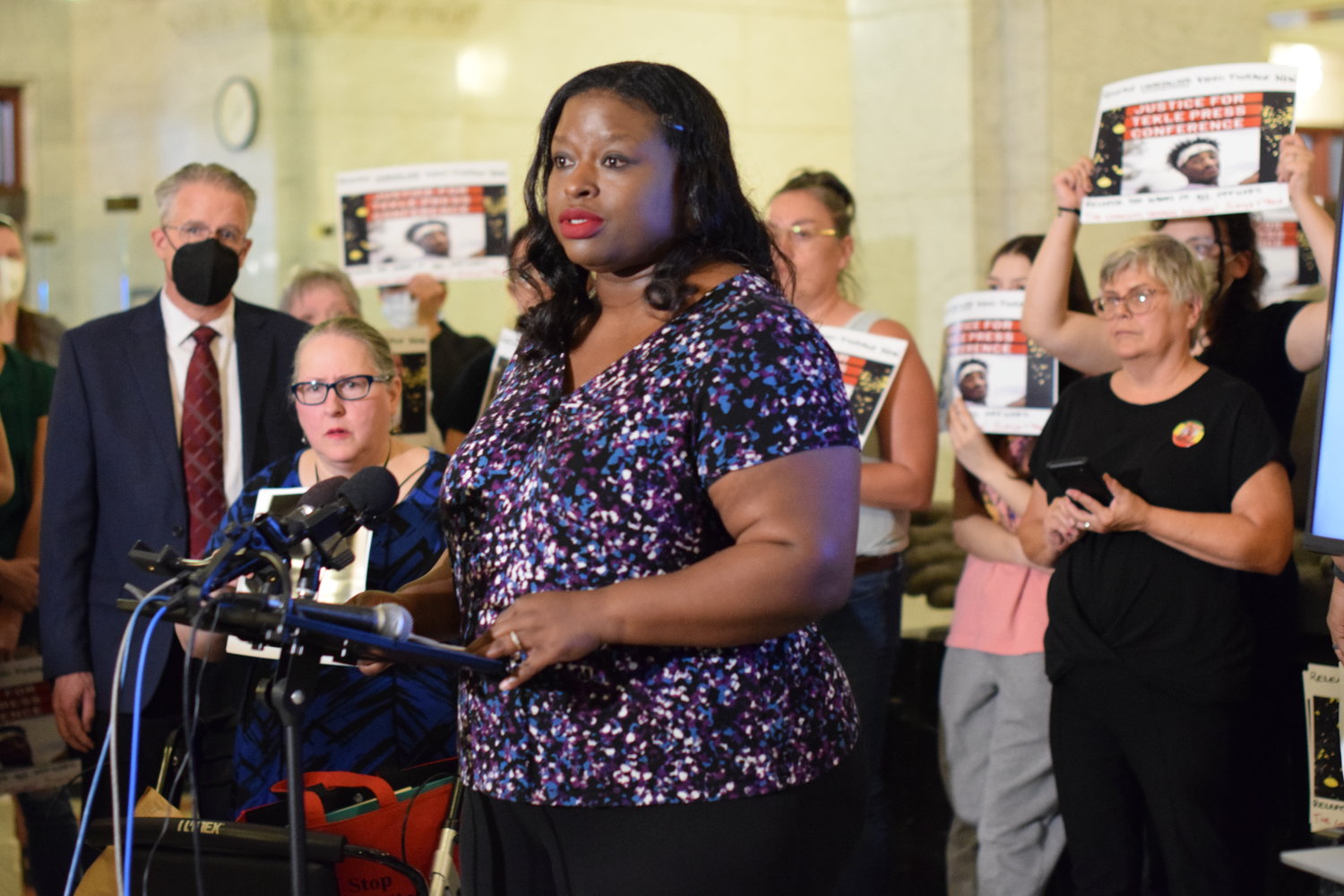 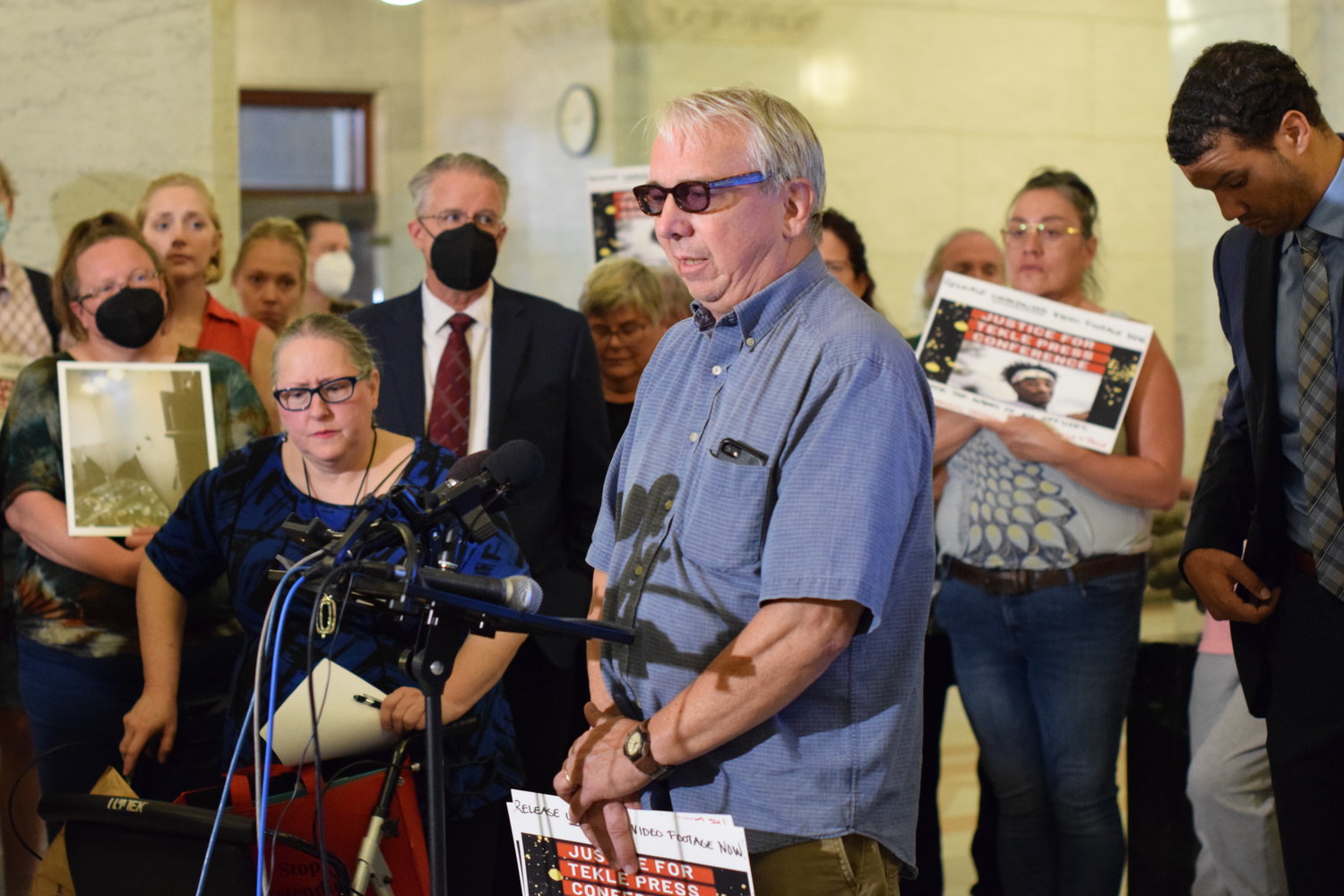 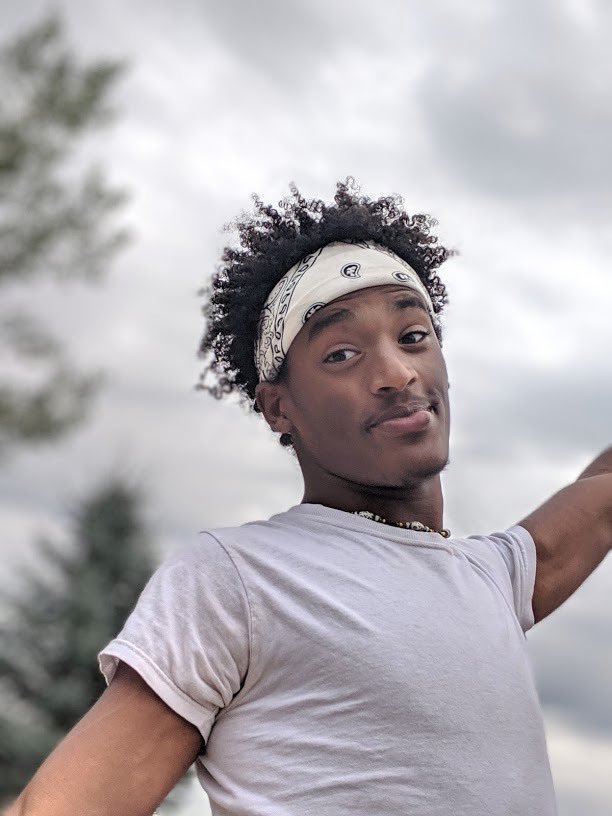 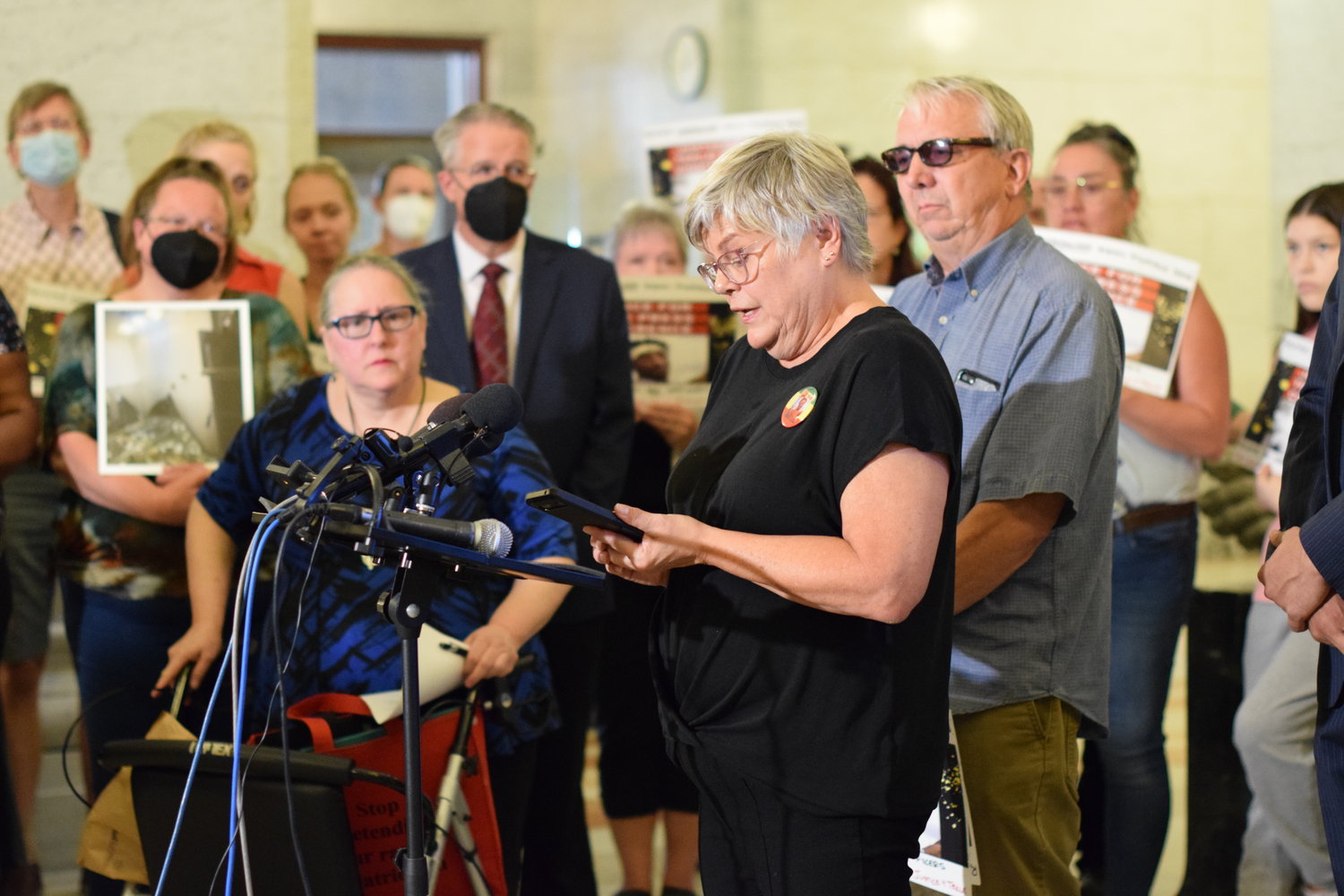 Cindy Sundberg (above) and husband Mark Sundberg are asking the city to release all available video footage from the night their 20-year-old son was killed by bullets from snipers with the Minneapolis Police Department. Tekle Sundberg lived in an apartment building at 904 21st Ave. South in the Seward neighborhood, and was killed July 14, 2022 while experiencing a mental health crisis. Bystander footage shows Sundberg the moment he was shot, six hours after the standoff began. His family was not allowed to go inside to talk to him although they were present and were there when he was shot by Aaron Pearson and Zachary Seraphine at 4:18 a.m. Mental health professionals were not called to the scene. (Photo by Jill Boogren) 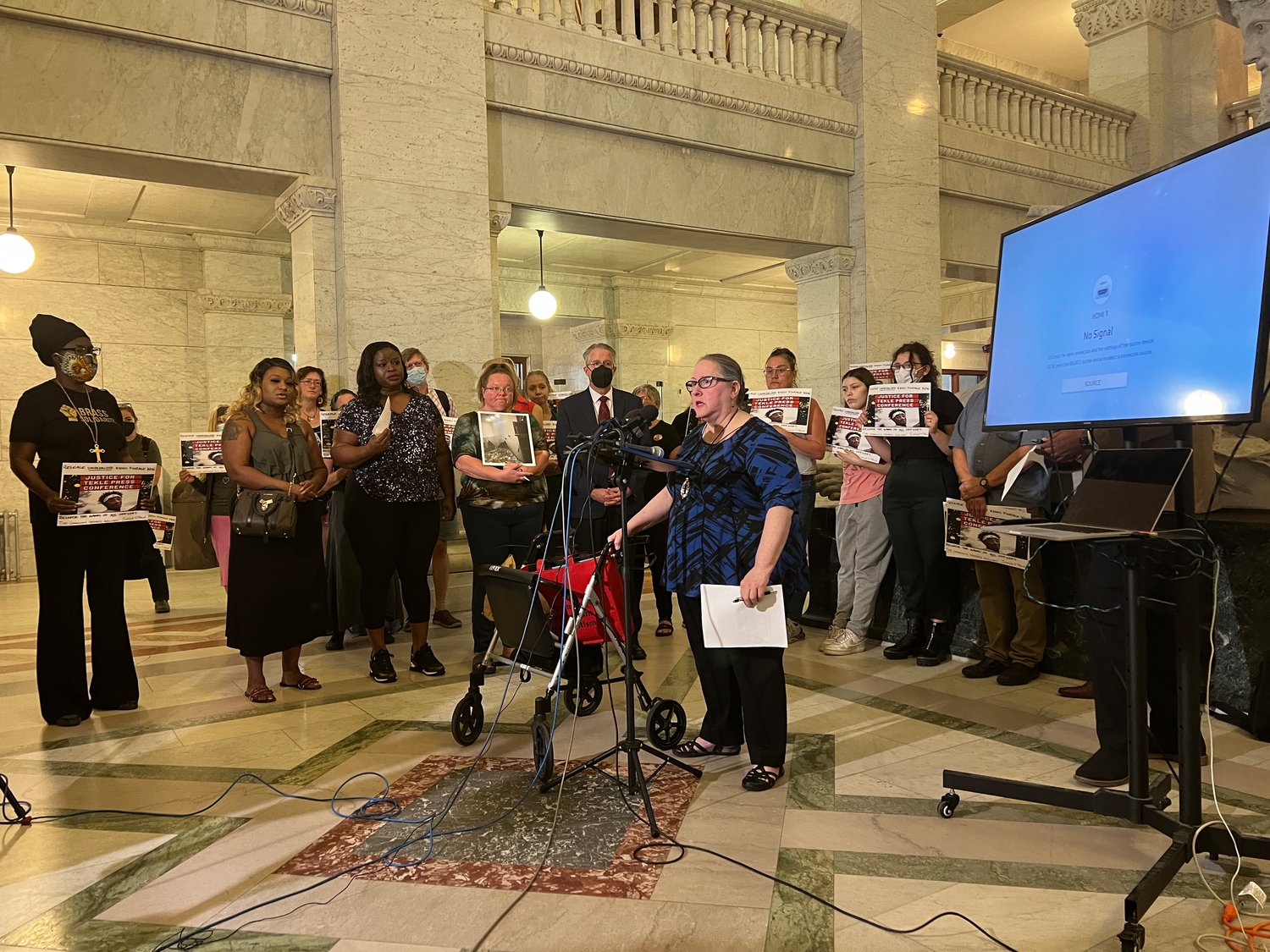 Cindy Sundberg described her son at an Aug. 17 press conference:

“Tekle and I both love plants. We’d talk about caring for them, best ways to help them grow. He’d stop by the house and he’d get starters from me. The last time I was in his apartment, I was helping him carry in all the plants he was taking back with him. Tekle liked cooking. He would talk recipes and spices with his dad. They’d shop together. Tekle would stop by the house while we were at work and leave a note on the counter saying that he cooked some food for us, and there on the stove would be a big pan, usually a rice and chicken creation. It was really good.

Tekle was independent, he was strong, he loved his family. He was searching. He was growing his learning.

Our family is broken. Things will never be the same. Our grandbabies will never get to know him and delight in the ways he would play with them and twirl them around the room dancing. There are so many things he will never get to do. Tekle I love you and I miss you. I’m so sorry.”

Rev. Curtiss DeYoung, a close longtime family friend who watched Sundberg grow up, called on city leadership to “do right”: release all footage, ask for an independent third-party investigation and answer the question as to why less-lethal methods were not used for the full duration of the situation.

A 12-minute video taken on a cell phone by a bystander shows the moment when Tekle Sundberg was fatally shot by Minneapolis Police Department (MPD) snipers while he was experiencing a mental health crisis in his Seward apartment – and raises questions as to what information the city has – and has not - provided to the family and public.
At an Aug. 17 press conference at city hall, president of Communities United Against Police Brutality (CUAPB) Michelle Gross showed two videos. The first was a compilation by CUAPB of short clips from MPD, WCCO, CCTV and the bystander video, to place each in context with other released footage.
The second was the complete 12-minute bystander video, which was given to CUAPB anonymously. Taken from across the street, it is the only video released that shows Sundberg at the moment when he was killed.
“It was given because that person wants this truth to come out,” said Gross.
In the video, Sundberg is seen knocking glass out of his apartment window. The person recording is heard saying “Does he have a gu- knife”? A gunshot is heard. The bystander is then heard saying, “He’s got a knife.” (Expletives deleted.) A second gunshot is heard, and Sundberg is seen falling onto the windowsill.
In the MPD footage, the snipers are heard questioning what is in Sundberg’s hand. Sniper 1: “I can’t see it.” Sniper 2: “That might be a gun.” Sniper 1: “He’s got a cell phone.” Sniper 2: “He’s waving something around there.” The word “gun” is spoken twice and within five seconds two shots are taken. The video shows a close-up of a finger pulling the trigger on the sniper’s gun for the second shot.
In the WCCO news report, a clip shows police calling Sundberg down. The newscaster then erroneously states, “Then more gunshots can be heard coming from the apartment.” The shots did not come from the apartment, however; they were those of the snipers, officers Aaron Pearson and Zachary Seraphine.
In fact, no other gunshots are heard prior to their two shots during the full 12-minute video provided by the community bystander. Sharing a still image (while recognizing the limitations of enlarging a grainy cell phone image), Gross said they believe the object to be a cell phone, a knife or a letter opener, not a gun.
Community leaders are asking for the justification for using deadly force under Minnesota law. Sundberg’s behavior was erratic, as it had been throughout the six-hour standoff, but what in that immediate moment prompted the snipers to shoot?
The Sundberg family wants to see all available video footage from the night, especially from those last moments.
“I wanna know what his last minute in detail was on video. One minute. Give me one minute in detail, and I think we can figure this out,” said his dad, Mark Sundberg.
He also wants body cam footage from when officers first went into Sundberg’s room after he was shot.
“We need to see that. We have heard nothing about it,” he said. “We want information. We need some information, and they’re just not giving it to us.”
City officials have not contacted the family since they first released body-worn camera footage, which represents only a tiny fraction of the views of officers stationed at different vantage points that night – 130 personnel were assigned to the call, according to the incident detail report.
Other questions were raised, as well. Gross shared an image of a shattered bathroom mirror that appeared to have been shot out, suggesting Sundberg may have been shooting at his own image in the mirror, not intentionally into his neighbor’s apartment.
“While the bullets did go into his neighbor’s home, and, of course, nobody wants to have bullets come into your home, and you don’t want to have to live with that, he was not targeting his neighbor,” said Gross. “In fact, this was the act of a man who was very, very ill and who was shooting himself in the mirror.”
According to 911 director Joni Hodne, the city’s Behavioral Crisis Response (BCR) team was not dispatched, per policy to not send the BCR when there are weapons. Community leaders suggested BCR could have been on the scene to advise police on how to deescalate the situation. Instead, MPD repeatedly called to Sundberg, “You’re under arrest. Come out with your hands up.”
Mark Sundberg wanted to go into the apartment to talk to his son but was prevented from doing so.
“I have dealt with people in mental health crisis, and if they see a familiar face or hear a familiar voice it can calm them down,” said Toshira Garraway Allen of Families Supporting Families Against Police Violence. “But yelling to come outside over and over and over again put that individual more and more at distress.”
Still more questions were raised, such as why tear gas wasn’t used. Racial Justice Network’s Nekima Levy Armstrong addressed her remarks directly to Interim Police Chief Amelia Huffman.
“You need to answer the public. Why was the SWAT team allowed to shoot? Why didn’t they use gas or some other less-lethal munition in this situation? Why [were] the same SWAT members, a couple of whom were involved in the killing of Amir Locke, allowed to be out there again and take the life of another Black person without justification?” she asked.
Community leaders called for an independent third-party investigation of the case.
“We do not trust the Bureau of Criminal Apprehension [who is investigating the case] for very obvious reasons, over the years consistently rubber stamping the narrative of police officers even in contrast to community members’ narratives about what happened as well as video evidence,” said Levy Armstrong.
CUAPB’s compilation video and the full bystander video are available to view from CUAPB’s website (cuapb.org).