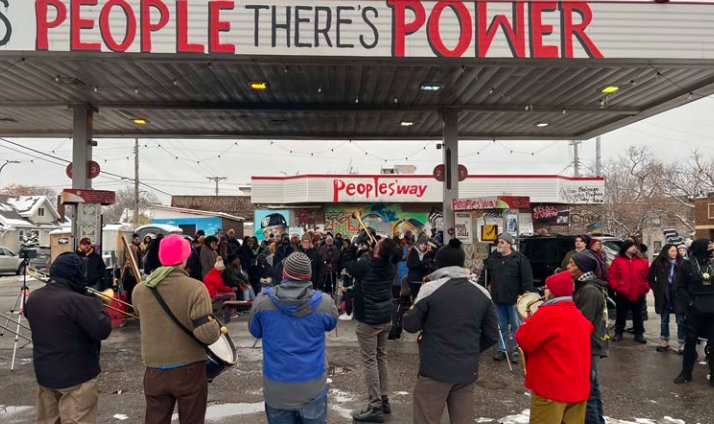 Brass Solidarity leads friends, family and community members in music and song at the Peoples' Way, George Floyd Square, to celebrate Tekle Sundberg on what would have been his 21st birthday Nov. 16, 2022. Sundberg was killed by Minneapolis police on July 14, 2022.
Jill Boogren
Posted Thursday, December 1, 2022 1:42 pm
By Jill Boogren

At a neighborhood meeting at Sabathani Community Center on October 24, Minneapolis’ Community Planning & Economic Development (CPED) agency announced plans to purchase the former Speedway gas station, now known as the Peoples’ Way, at 38th and Chicago. The city wants to secure the site – and assume liability – for a future use determined by the community.

“We do not have any intention of being the long-term owner here, unless it is determined that it makes the most sense for community-informed use,” said CPED director Andrea Brennan.

Director of Economic Development Erik Hansen said negotiations began in September and the property owner, California-based Realty Income, is interested in selling. A purchase could take place as soon as December.

Many residents were skeptical. Jeanelle Austin, resident and executive director of the George Floyd Global Memorial, pointed out that what was first presented

in the meeting as a “possible” acquisition sounded more like an intended one, and she questioned the swift timeline.

“Just to have one community feedback meeting feels like it’s being done to us as opposed to including us,” she said.

Bobby Hull asked, “Why should we trust Minneapolis?” He reminded city officials that the people took over the space after George Floyd was murdered. The property is across the street from where he was killed and has been the site of countless gatherings, including twice daily community meetings, for more than 900 days.

Other attendees echoed similar sentiments throughout the course of the evening, during which they broke into small workgroups by table and discussed prepared questions. Following the format of other monthly Learning Tables focused on road reconstruction at 38th and Chicago, a spokesperson shared thoughts and ideas from each group.

“I do agree that right now people should be apprehensive about the city owning the property without firm understanding of who the beneficiaries will be moving forward,” said Alexander Bourne. He suggested building up from the gas station instead, commenting that gas stations provide great entry level jobs. He felt that building up would still allow inclusion of the types of neighborhood services people were talking about; culturally relevant trauma resources, workforce development, a museum could all be added as additional stories above the station.

“It’s very expensive to knock down a gas station, dig it up and rebuild,” he said. “If the city has the money to do that, and they’re willing to allocate that money to that particular site, then they can repurpose those dollars and essentially build up.”

Dave Bicking reiterated that many do not trust the city to control this spot.

“You never asked us whether the city should buy it. That wasn’t one of the three questions. Obviously, that’s been decided,” he said.

The three questions small groups were asked to address were whether this was the right track, how community is defined, and what the city needs to know about the current site.

A number of attendeees mentioned the fact that the site has become a mutual aid hub for neighbors and visitors.

“People come here for food, they come here for clothes and warmth, hydration in the summer… for books and vegetables,” said one speaker. “This is really important, and we’d like to see that preserved.”

Agreeing with the location as memorial, another speaker wanted it to remain a place of racial healing where people could have a sense of community while honoring the ongoing movement. He suggested modeling the space after the Lorraine Motel in Tennessee, where the Rev. Dr. Martin Luther King, Jr. was assassinated in 1968 and which is now a National Civil Rights Museum.

Referring to both the process and purchase, Tim Lunning said simply, “I do not consent.”

“When you start from a position of ‘You can’t please everyone’ [paraphrased from a sentiment expressed by the meeting facilitator], it means someone is going to be excluded,” he said. “I’m worried about who is displaced from this process.”

CPED’s request to authorize purchase of the property was on the agenda of the City Council’s Nov. 29 Business, Inspections, Housing & Zoning Committee. The cost to the city would be $200,000, with the seller donating $420,000, the difference between the purchase price and fair market value. If approved, the full City Council will review it on Dec. 8.