Dine outside this winter

Garden Igloos proving to be popular addition on patio 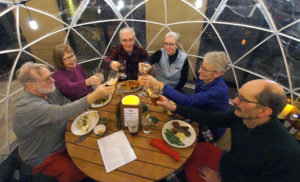 Minnesota is known for many opportunities, but dining outside in the middle of winter isn’t one of them.

However, that may change if other restaurants follow the trend set by the Longfellow Grill (2990 West River Parkway). Just before New Year’s, the drinking and dining establishment set up two geodesic domes on its patio. The domes or “Garden Igloos” are heated structures, designed to seat eight customers who can enjoy cocktails and dinner outside on a sparkling winter evening.

“We don’t have them active all the time because of the propane usage,” said manager Andy Blankenship. “We basically set them up for the bookings.” That can vary from one to seven bookings per night.

The domes are reserved by the hour. Patrons must guarantee to spend $100 per hour minimum Sunday through Thursday or $150 minimum Friday and Saturday.

“That’s not on top – you just have to spend that much money on food and beverages,” Blankenship said. Although the domes are designed to hold eight people, he said that 12 can fit, with extra chairs brought in. 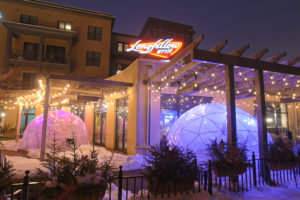 The Longfellow Grill is leading Minnesota in a new trend: garden igloos that make patio dining a year-round thing.

“The domes can stay warm when it’s 5 below outside,” Blankenship noted. “We had guests when there was a negative wind chill of 15, and there was no problem.”

He said the restaurant staff did some trouble-shooting the first week they had the domes open. “We’ve gone to buy propane gas heaters to keep the gas flowing nicely. We learned we have to open them up and air them out a little bit, because when condensation freezes, and you start to heat you get a rain forest effect in there. We don’t want anyone dripped on,” Blankenship said. “But we’ve worked out a lot of kinks this year, and overall they have been very successful for us.”

An added benefit, according to Blankenship, is late-night bookings. “We have never booked a lot of late-night reservations at the Longfellow Grill, although we are open until 11 p.m. But we have had people booking the domes at 9 or 9:30 p.m. for after-dinner cocktails. We did not expect that, and we’re happy it brought some people in at times that we had not been busy before.”

Blankenship said the idea for setting up the domes came from David, the restaurant owner, who was out in Washington, D.C., last year and saw a number of domes set up outside the Watergate Hotel, lined up along the Potomac River. So they tried them at the Longfellow Grill.

“We were going to have them go up right after we took down the patio, but we had to build bases for them and get them off the ground and didn’t get them going until January,” he said. “But the plan is next year, the minute the patio furniture is removed, the domes will go up. We can have them in that more moderate November, when it’s chillier but we are not dealing with negative temperatures and snow.”

He said this year the hope is to keep the domes up until at least mid-March, depending on the weather.

Pick your own music, lights

Lighting for the domes is part of the make-it-your-own experience that customers can enjoy, according to Blankenship. “We have LED lights that you can download an app to. You can have stagnant lights or blinking lights or a rain effect. If the lights are all red, that’s a signal for your server.”

Although the wait staff provides the restaurant’s standard of service, they also don’t want to be zipping the dome open because they want patrons to enjoy a private experience.

“We also have Blue Tooth in there so customers can have their own music. When you book a private room in a restaurant, you don’t get that all the time,” Blankenship said. A selection of games is also available, and “newfangled” Polaroid cameras for photo opportunities.

Blankenship said he has not seen any other domes on Lake Street or in downtown Minneapolis. But Hudson, Wis., has some along the river.

“They are untapped real estate for us in the winter,” he added. “There was some suspicion by guests, wondering if you could really eat out there. But now that the ball’s rolling, and there are social media posts, it’s snowballed and is steamrolling. We have been booking a lot.” 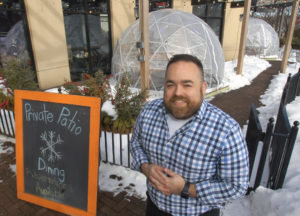 The biggest challenge in using the domes is maintaining the temperatures. “We had some really cold nights, and if it wasn’t for one of my assistant managers recommending these propane heat blankets, I wouldn’t have known they existed,” Blankenship explained. He said staffing was another piece to work on, but he has had dedicated servers for every night of the week.”

He said he needs to thank the youngsters in the neighborhood who have noticed the domes on their way home from school and persuaded their parents to bring them for dinner. “We have had birthday parties and a couple proposals. It has definitely got a new car smell right now, but it will be interesting to see if it becomes a trend and if other restaurants put them up next year.”

Blankenship advised anyone with any questions about dining in the domes to call the restaurant for more information.

“We are making outdoor eating a thing here at Longfellow Grill,” said Blankenship.

A customer describes her dome dining experience: Jan Lysen joined her husband and two other couples for a recent visit to the Longfellow Grill to experience eating in one of the domes.

“Although we have gone to the Longfellow Grill, this was our first time in the dome,” she noted. “It was in the high 30s on the Sunday we went, and it was a nice experience.”

She said the staff slipped in and out of the dome quickly, never letting in a big blast of Arctic air.

She said a little blanket was also provided if they needed it, and their server popped in and out a few times, nothing intrusive.

“We could hear each other talk, which isn’t always the case in a noisy restaurant,” Lysen added. She suggested other visitors might like to try the options for lights and music at the beginning of their dinner hour.

The friends who gathered were of Finnish, Swedish, Norwegian and Danish nationalities. “It was like a Hygge for our environment. It was a nice and cozy and friendly experience.”