An “extremely affordable” housing project in Longfellow will bridge the gap for people who are working but still don’t make enough to afford a standard rent payment.

Amber Apartments is being built by RS Eden, a niche player in the development world that provides affordable housing with support services, explained President and RS Eden CEO Dan Cain.

“The expectation is for people to move from a level of dysfunction to function,” said Cain.

The company manages or owns nine buildings in the Twin Cities, totaling 550 units, that help people get off the streets and into stable housing. The company began with just three staff members and now has 180 employees. In each building, there are also services aimed at dealing with problems that contributed to homelessness, including addiction, mental health issues, lack of education, and more. 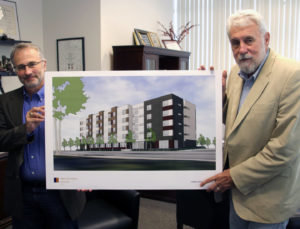 The goal of the Amber Apartments in Longfellow is to provide efficiency, single-occupancy units at about $600 a month.

“We’re not giving people a handout, but a hand up,” explained Cain. “They have to do the work, but we provide the opportunity.”

RS Eden employees envision filling Amber Apartments with tenants who are working but don’t make enough to afford market-rate housing—even what’s labeled as “affordable.” Maybe they’re working at a couple of part-time jobs. Or, they work next door at Walgreens or Cub as a cashier earning minimum wage.

“This will allow them to continue in the process of working and being responsible citizens, and not have to spend 50% or more of what little income they have on rent,” stated Cain.

According to RS Eden Vice President of Supportive Housing Lois Mueller, “Many of the people we meet have histories that have resulted in multiple barriers to securing housing, making it easy for landlords to screen them out. RS Eden’s commitment is to ‘screen people in.’ We look for reasons to believe that a prospective tenant will make it, and become a good neighbor.”

RS Eden focuses on creating intentional communities in their buildings. “We look for people who have buy-in to a culture of pro-social values and beliefs,” explained Cain. “They may not have always been that, but now they want to contribute to the community and take responsibility for their own lives. There are any number of barriers that people have had to overcome to make that full leap from where they’re coming to where they’re going.”

He added, “It’s breaking the cycle.” 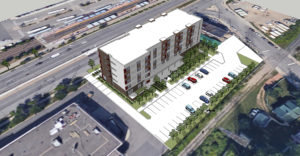 Photo right: Amber Apartments is being named after RS Eden President and CEO Dan Cain’s daughter as a legacy project to honor the 46 years he’s been with the organization. The majority of the $18 million cost of the project will be covered by various grants and low-income housing tax credits, but RS Eden needs to raise $700,000. (Photo by Tesha M. Christensen)

Right now there are some people who aren’t being served by the housing projects RS Eden already offers as they aren’t technically homeless because they’re staying with a mom or brother or friend. Amber Apartments will provide a place for those people, said Mueller.

One of the first steps RS Eden took in getting this project off the ground was to visit with the Longfellow Community Council and garner support.

“We look for a neighborhood that will support the transition for people to become involved in their communities,” stated Cain.

It wasn’t until the LCC Neighborhood Development and Transportation Committee approved the project that RS Eden purchased the property.

Amber Apartments will be located on the property that now houses the Bell Laboratory building, just north of Walgreens along Hiawatha Ave. and kitty-corner from the upcoming Snelling Yards housing development. It does not include the historic Flair Fountain structure.

The five-story, 53,950 square-foot building will sit on one acre. It will include 80 efficiency units that range from 418 to 518 square feet. A parking lot will have 40 spaces, or about a half space per unit, and there will be inside storage for bicycles. One-third of the property will be green space along what planners hope will soon be the Min Hi Line linear park.

The entrance to the building will be off 45th rather than Hiawatha.

The building will sit directly across from the 46th St. light rail station, and planners expect that most residents will not have a car. It was the proximity to a light rail station and A Line Bus Rapid Transit that drew RS Eden to this site.

“For low-wage workers, the expense of owning and operating a dependable car presents one more barrier to success, but not having a car means not having access to jobs, health care, and other necessary amenities,” remarked Mueller. 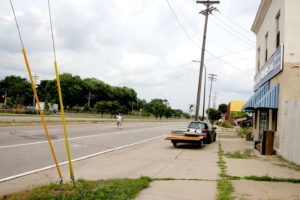 Photo left: RS Eden President and CEO Dan Cain hopes the city will consider constructing a pedestrian bridge near 45th and Hiawatha to serve residents, including high-density housing projects at Amber Apartments and the Snelling Yards site. Right now, people regularly cross Hiawatha near 45th instead of walking down to the crosswalk at 46th. (Photo by Tesha M. Christensen)

Amber Apartments is being named after Cain’s daughter as a legacy project to honor the 46 years he’s been with the organization.

The majority of the $18 million cost of the project will be covered by various grants and low-income housing tax credits, but RS Eden needs to raise $700,000. Donations can be made via the website at www.rseden.org.

Planners expect Amber Apartments to be fully funded by the end of 2019, and to start construction shortly after that. It will take 10-11 months to complete.

Rental vacancies in the Twin Cities have dropped to 2.4 percent while the unemployment rate has dropped to 2.9 percent resulting in low rental vacancies and strong rent growth, according to the Dougherty study. Meanwhile, the compensation for private market workers in 2017 increased just 1.4 percent, making it difficult for low-income wage earners to find housing.

“There has been a lot of attention recently on the homeless encampment along Hiawatha Ave., but we’ve been facing a crisis in homelessness far before those tents went up—it just hasn’t been quite as visible,” remarked Minneapolis City Council member Andrew Johnson. “The Amber Apartments proposal helps address this crisis by creating some units for homeless individuals and families, along with providing necessary support services, such as helping them get and keep jobs. It also creates additional units that help address the affordable housing crisis hitting many major cities, including ours, with runaway rents that push working families out and destabilize their lives.

“We need more development proposals like this and I am thankful to have RS Eden as a partner in these efforts.”