Five vie at 63B forum 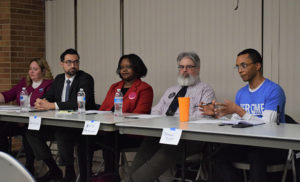 With longtime Rep. Jean Wagenius’s announcement last November that she would not be seeking reelection in 2020 to her seat in the Minnesota State Legislature, several candidates are now vying to represent the portions of south Minneapolis and Richfield that make up House District 63B.

In late January, five DFL candidates got a chance to introduce themselves and present their views to several dozen residents at a DFL candidate forum held at the Richfield Community Center.

The two-hour forum, moderated by the DFL’s Amy Livingston and Thomas Anderson, was structured around five prepared questions, with none taken from the audience.

In this historically left-voting district, all five candidates promoted progressive platforms. But while there were areas in which there was broad agreement – the need to address disparities between white residents and people of color in education, housing and health care, providing mental health services, addressing climate change – candidates did differentiate themselves in terms of priority and approach.

The result? An information-packed evening that left people with plenty to ponder.

Here are brief excerpts from candidates’ introductions and what they stated as their priorities to kick off the forum.

Having experienced “both comfort and poverty,” Emma Greenman said she would never forget the feeling of getting off a waiting list for subsidized housing and moving into the Towers at Cedar-Riverside, for the safety and security it provided as her mom struggled with mental illness.

A former Wellstone organizer and voting rights attorney, Greenman called 2020 “a make or break moment for our democracy,” which she said is under attack by voter suppression and money in politics. She wants to focus on fixing the system first.

Her first priority would be to restore the right to vote. She called for automatic voter registration and pre-registration for 16- and 17-year olds, and for ensuring every dollar spent on ads is disclosed.

For Tyler Moroles, formerly with the Minneapolis Public Housing Authority and currently a manager of the Community Development Block Grant Development program in Hennepin County, addressing inequities in home ownership is a top priority.

“We have some of the worst inequalities in home ownership people of color and white folks,” he said. He wants to see a renters bill of rights that ensures landlords give advance notice of vacating property and are not vacating for no reason, that gives tenants legal protections and establishes a tenant defense fund.

“Usually landlords have lawyers, tenants do not,” said Moroles.

He would also double the amount of funding for the Housing Finance Agency, which he said is twice as likely as private market lenders to give a direct home buyer assistance loan to a household of color. Moroles would also work to reduce property tax, so people, especially seniors trying to “age in place,” don’t get pushed out of their homes.

He also called for immigrants’ rights, expressing support for Driver’s Licenses for All, a bill passed by the House in 2019 that has not yet been taken up by the Senate. Born and raised in the district, Moroles describes his father as a Mexican-American Chicano migrant worker who lived “as a second class citizen his whole life.” He became addicted to opioids and died when Moroles was two years old. He was raised by his mother, who worked at a nursing home to provide for him. She was in the audience at the forum.

Husniya Dent Bradley, a chemist, campaign organizer, lawyer and program administrator/counselor for career and professional development at Mitchell Hamline School of Law, said her first priority would be to work with the Metropolitan Council and the Transportation Planning Commission on solutions for the I-494 underpass and for Crosstown Highway 62. She said the proposed MnPASS lane on I-494 could also be done on Crosstown Highway 62 and suggested widening the freeways by getting easements on some of the homes. In addition to the METRO Orange Line (I-35W Bus Rapid Transitway), she suggested adding a faster train over Portand Ave.

“That would definitely ease some of the congestion and some of the transportation issues,” she said.

Dent Bradley moved with her parents from Cincinnati to Chicago, where they were involved in voting rights and marches. In his job at the postal service, her dad helped union workers fight for union rights, which is where Dent Bradley learned about speaking up and the importance of people making their voices heard. Ultimately her family moved to 43rd and Chicago Ave. in Minneapolis, where they dealt with public assistance as well as having to vacate their home due to basement flooding.

The first is to use pumped hydro to create an energy storage system that would use excess power (produced from solar and wind) to push water up to a reservoir, which could then be released over hydro turbines to recreate the electricity when it’s needed again.

“If we’re going to allow renewable energy to replace fossil fuels, we have to deal with the problem of renewables not providing baseload power,” he said. “We’ll probably have battery power eventually, but global warming isn’t waiting for eventually.”

His next idea is to cover the freeways, which tore out many homes and entire neighborhoods when they were built, to create space to build more housing.

Third, he would offer a free college plan he calls “Commit to Minnesota,” which would make any post-secondary education free if students commit to living in Minnesota for five years after they leave school.

Ferguson knows it would take time to build support for these ideas, so in order to get something passed quickly, his immediate priority would be to address “a local problem that is very solvable”: expanding noise mitigation – better windows and air conditioning – to the parts of Richfield that are under the airport flyways.

Jerome T. Evans grew up in Atlanta, Georgia, went to Georgia Tech, then law school. After practicing law for a few years, he moved to Minnesota.

Evans, who now chairs the Nokomis East Neighborhood Association, is co-chair of the Minneapolis Public Health Advisory Committee and serves as president of his condo association, said he and his partner, Aaron, are considering growing their family of two. In putting on his “Dad hat,” he found the data to be disturbing.

“If we have a child that looks like me [a person of color] and we put them through our public education system, they will receive a lower quality education than if they look like Aaron,” said Evans. “And that does not align with our values.”

Evans emphasized the need to take a data-driven approach when talking to Republicans in the Senate.

“You can talk racial justice with them until you’re blue in the face, and you will not get anything done,” he said. “Let’s start talking data, let’s keep it real, leave the rhetoric behind.”

His first priority would be to create the “Minnesota Hope Scholarship,” which would provide a pathway for low-income students of any ethnicity to get into college in Minnesota without having to pay for tuition.

After the first round, candidates responded to questions about improving public safety, addressing health care needs and crisis services, addressing homelessness and affordable housing, and strengthening Minnesota’s schools, with a final round asking candidates to talk about anything that was missing (see the Q & A guide on the previous page for a snapshot of these responses).

“The biggest thing I noticed is lack of mention of the disability community,” she said, despite candidates discussing other demographics and the fact that transportation, housing and health care all apply. She did acknowledge that Greenman specifically mentioned accessible housing.

DFL Senate District 63 Secretary Larry Nelson offered his take. “I think we have five good candidates. All of them have good strengths and experiences they’ll bring to the Capitol.”

Frank Pafko is running for GOP endorsement as the candidate for MN House of Representatives in District 63B. He ran in 2016 and 2018 against Rep. Jean Wagenius, who won her reelection by wide margins.

VOTE in the presidential primary March 3

In 2016, legislation was passed creating a presidential nomination primary, Minnesota’s first since 1992. The 2020 primary will be held Tuesday, March 3.

To vote, you must choose which party’s ballot you want. Two major parties are participating in the presidential primary, the Democratic-Farmer-Labor (DFL) Party and the Republican Party.

Use the Voter Registration Lookup to see if you’re already registered.

All genders invited to League of Women Voters

The League of Women Voters is a non-partisan political organization open to all genders that:

The Civic Buzz meets the first Tuesday of each month, with new topics and speaker, followed by discussion. 5:30-7:30 p.m. at the Black Forest Inn, Minneapolis. There will be no March Civic Buzz meeting as people are encouraged to vote in the Presidential primary election.