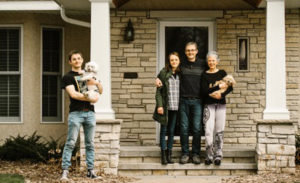 Kristi Anderson, at right holding Barney, appreciates seeing her neighbors at least once a day from a distance while they come together to sing. With her, from left to right, son, Josh (holding Boomer, the white dog); daughter, Taylor; and husband, Scott. One day, Caitlin Nightingale, whose parents live on Isabel Ave. and who is without a studio due to COVID-19, offered to snap photos of families on their front steps, part of her #frontporchproject. (Photo courtesy of Caitlin Nightingale Photography)[/caption] Play a game together with your neighbors when you join in the LoLa Scavenger Hunt. “Walks outside are still allowed, and are good for your physical and mental health. I intended this scavenger hunt to bring an element of novelty and excitement to an ordinary walk in the neighborhood, and also encourage neighbors to walk farther and longer,” observed local artist Jinjer Markley. "Also, it’s a game that we can play ‘together,’ and even check on each other’s progress by following the hashtags. My hope is that more frequent distance-greetings with our neighbors will make us all feel more like part of a community.” Markley has lived in the Wonderland Park area of Longfellow for over six years with her husband Presley and her 13-year-old daughter. She was inspired by a similar activity in Lexington, Ky. where her mother lives. As Longfellow already has an established group of artists, it was easy to replicate the neighborhood game here. She got enough volunteers to run two concurrent scavenger hunts – one in upper Longfellow, and one in lower Longfellow. The hunt started on April 15 and will continue through May 15. “Go on walks in your neighborhood, looking in windows for art. Don’t forget to say hi from at least six feet away if you see a neighbor – even if it’s just with a wave. If you find art in a window, take a selfie with the art in the background – try to find all of the artworks on the scavenger hunt flyers, visible at www.jinjermarkley.com/lolaqac. If you post the selfie on social media, tag it #lolaquarantineartcrawl or #lolaqac. You could follow the tags to see who else is out and about in your neighborhood!” The maps are also available online at the League of Longfellow Artists (LoLa) Facebook page or www.LongfellowNokomisMessenger.com. Neighborhood sing 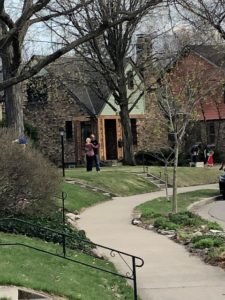 Each night at 7 p.m., neighborhood join in the Seven Oaks Front Porch Sing. Kristi Anderson, who has lived on Isabel Ave. for three years, was inspired by news reports of Italians singing on their balconies, and people singing in Spain and Israel. When she heard about the local idea of singing “Imagine,” she pulled out the email list from National Night Out and suggested they step out onto their front steps or yards, sing and dance together. “We have a pretty enthusiastic group of people,” said Anderson. “It’s nice to see your neighbors out there.” The sing started with Isabel Ave. homes and stretched out from there. Anderson sends out an email each day with a list of 3-4 songs, lyrics and links to song videos. Fellow resident, Phil Hide, who also lives in the middle of the block, has taken over setting up a speaker to share the songs via Spotify each evening. They’ve done the Beatle’s “Here Comes the Sun” a few times, knowing it is a song some hospitals play when patients are released or removed from ventilators. In mid April, they sang a song from local musician Nachito Herrera, who returned home after COVID-19 hospitalization. For fun, they’ve also done the Hokey Pokey. At the end of each Sing, they clap together in gratitude for frontline workers. Anderson is glad to have an updated email list of neighbors. Sophia Kim used the list in April to put together a care package of prepared food for her friend – a single parent of a 12- and 14-year-old who has been working double shifts at the Hennepin County Medical Center emergency room. More than a dozen neighbors contributed to that effort. Neighbor Ann Prosser used the list to get the word out that Blue Cross and Allina were seeking homemade masks and to share other resources for making them. Anderson includes a bit of art in her emails, as well: a photo of the painted rocks she sees while out walking her dogs. She began attributing them to the Rock-Painting-Artist Fairy – who turned out to be neighbor Gina Jorgensen. 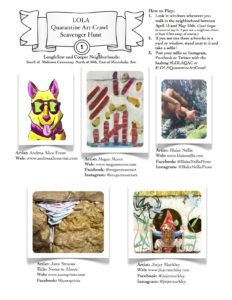 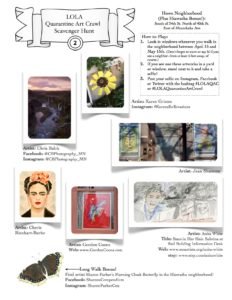 On Tuesday, April 14, the steering committee for the League of Longfellow Artists (LoLa) notified artists and supporters that they are cancelling what would have been the 12th annual LoLa Art Crawl originally scheduled for Sept. 19–20, 2020. Given the high likelihood of a fall resurgence, or simply a continuation, of COVID-19 infections, they felt that it would be risky and impractical to invest time and money in preparing for the crawl as usual. Instead, they will be exploring other ways to share the creative output of LoLa artists with the community. Artists have been understanding of the decision as they are coping with the effects of the coronavirus and physical restrictions in their own lives. “I am disappointed and heartbroken,” said Maya Brown of mayamade.“I do however understand and think it’s the best decision for everyone.” The crawl has been an annual event since its founding in 2009, and the committee members—Steve Clark, Lisa Anderson, Sharon Parker, Sue Romain, Chris Miller, and Ken Wenzel—came to the decision to cancel it with a degree of disappointment and resignation. The decision was informed by a few realizations: (1) Public health concerns around welcoming strangers into close proximity inside artists’ yards, homes, studios and small businesses; (2) Uncertainty about what lies ahead and the likelihood that it would have to be called off as we got closer to the date; (3) The financial hardship faced by our neighborhood businesses, which provide a significant portion of the funding that makes the crawl possible. “Frankly, we didn’t even want to ask,” said Parker about soliciting sponsor donations. Normally, if the crawl were to go forward as in the past, volunteers would need to start preparations now. “Spending thousands of hours of volunteer time between now and September only to cancel is not the best use of our resources,” said Bob Schmitt in response to the announcement. Schmitt is past administrator and co-founder of LoLa along with Anita White. 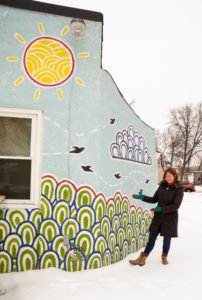 LoLa artist Megan Moore stood next to her mural on the Minnehaha Scoops building earlier this year.
The artwork wraps around the building, see it at 3352 Minnehaha Avenue.

This spring and early summer, the organizers will be communicating with LoLa artists and other stakeholders in various ways, using technology that has become increasingly common in these days of coming together while distancing, as well as phone calls, email, and other means. The group’s goals remain to showcase and promote LoLa artists in their art-making, exhibiting, and sales; involve local businesses in ways that are mutually beneficial; and connect with the community. They expect to employ a mix of social media, the LoLa website, and home and business activities throughout Longfellow for community members to explore and enjoy the richness of our artist community and small independent business partners in appropriate physically distanced ways. The forms this will take are yet to be determined and will be informed by the networking and communications described above. Among the projects in the works are a series of art “scavenger” hunts, with flyers made available via Facebook and NextDoor. Please watch for announcements and news from LoLa in The Messenger and other media in the coming months, and on social media via the handle and hashtag LoLaArtistsMN. When you go on walks and bike rides in the neighborhood, look for art all around you—on buildings and utility boxes, in the windows and front yards of artists’ homes, and even on top of Little Free Libraries (one LoLa artist, Terry Faust, makes “Wee Weather Vanes” for LFLs)—as we continue to make and share our art in sometimes surprising ways. “We will grow out of this setback. And we will flourish,” said Schmitt. “We move ahead with courage,” said White. LoLa is the League of Longfellow Artists, which is a volunteer-driven community organization that showcases, nurtures and supports Longfellow art and artists. It began in 2009 as a small grassroots effort to raise the visibility of artists living or working in the Greater Longfellow Neighborhood of South Minneapolis. The annual LoLa art crawl started with 42 artists at 20 sites and has grown ever since, with 119 participating artists in 2019 exhibiting at 56 sites. LoLa looks forward to meeting with the public again next year.