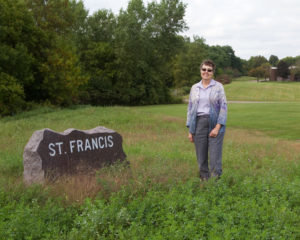 Executive director Joan Gizek stood on top of the plot she has already purchased in the natural burial section of Resurrection Cemetery. She said, “I love the idea of coming into the world, and leaving the world, simply. I look forward to going back to the earth, to being part of creation. More than 100,000 tons of steel and 1,600,000 tons of concrete are used in the U.S. for traditional burials each year. Natural burial is the original recycling.” (Photo by Margie O’Loughlin)[/caption]

In the Catholic tradition, the body upon death is re-committed to the earth, “for we are dust, and to dust we shall return.”

Some people are taking this belief to heart again, with a desire to have a more organic, less industrial approach to death and burial.

The Catholic Cemeteries consists of five locations that have served the Twin Cities Catholic community since 1856. Their Resurrection Cemetery in Mendota Heights has recently become what is known as a hybrid cemetery. It contains a traditional cemetery, and a newly created natural burial allotment on a nearly three-acre restored prairie.

As the gravesites in the allotment become occupied, native perennial flowers and grasses will cover them. Eventually, the natural burial area will become a peaceful, uninterrupted prairie maintained in perpetuity along with rest of the grounds.

What is a natural burial?

Catholic Cemeteries Executive Director Joan Gezik said, “We’ve been studying the natural burial concept for the last eight years. Our allotment was just blessed and dedicated by St. Paul Arch Bishop Hebda on Memorial Day 2019. Our mission is to bury the dead – not just Catholics. The first of several sections that we’ve opened can hold 40 graves, and we have sold over half of them.”

If the body of the deceased is clothed, the clothing must be made of natural fibers such as cotton, linen, wool, or silk that will decompose over time. The garments must be free of all plastic and metal such as buttons, zippers, and hooks. Jewelry, belt buckles, and other materials that are not biodegradable cannot be buried along with the deceased.

The body of the deceased may be washed, wrapped in a cloth shroud made of natural fiber, and placed in a grave – which at Resurrection Cemetery is dug to four feet deep. The wrapped body can also be placed in an open or closed container made of biodegradable material like pine, wicker, or bamboo.

Rather than placing individual headstones or markers on grave sites, the names of the deceased, along with their birth and death years, are listed on a permanent community monument in the natural burial area. The cemetery office will also maintain burial records, and a grid map with the approximate location of each burial site.

Costs associated with a natural burial are less than those of a conventional burial. The purchase of a gravesite includes a contribution to the permanent burial site care fund, and the cost of memorializing a name on the common memorial. The internment (grave opening and closing) fee is paid at the time of burial; with natural burial, no outer burial container is required by law.

From then to now

When the body of Jesus was removed from the cross, it was washed, wrapped in a cloth shroud, and placed in a tomb. For many years, most burials took place in a similar manner. These practices changed in the U.S. around the time of the Civil War, when bodies were transported long distances for burial. By treating the body with embalming fluids to prevent decomposition, the body became suitable for transportation and for viewing.

Renewed interest in natural burial is influenced, in part, by people’s desire to honor their loved ones in a manner that is sensitive to the environment. The first “green” cemetery in North America was opened in South Carolina in 1998.

Pope Francis – whose reverence for nature led him to choose his papal name inspired by St. Francis of Assisi, the patron saint of ecology, is committed to the sanctity of nature and the need to protect it. The Pope asks Catholics to be mindful of the natural world, and to dedicate themselves to having a gentler impact on the planet.