Preventing the spread of jumping worms 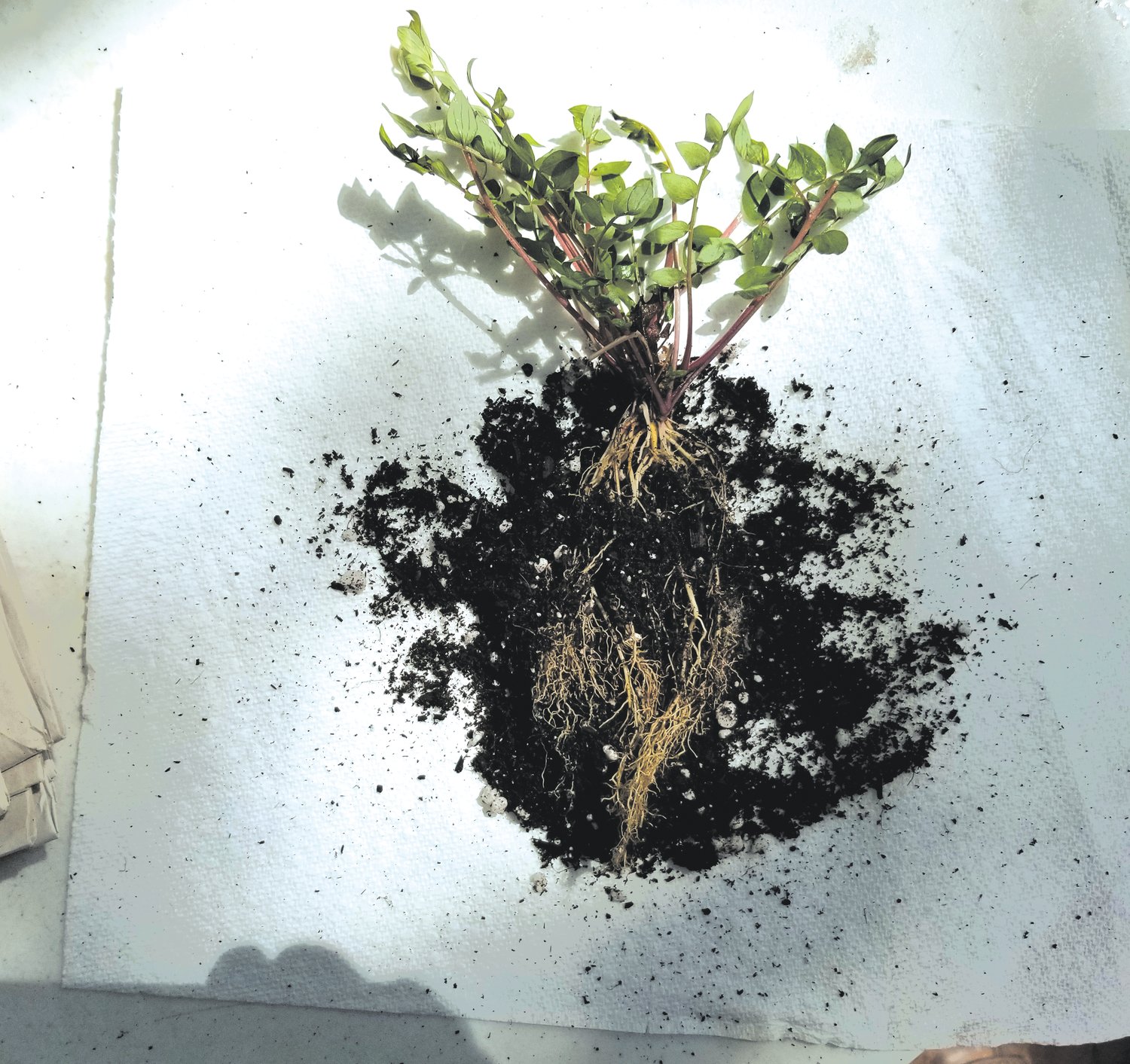 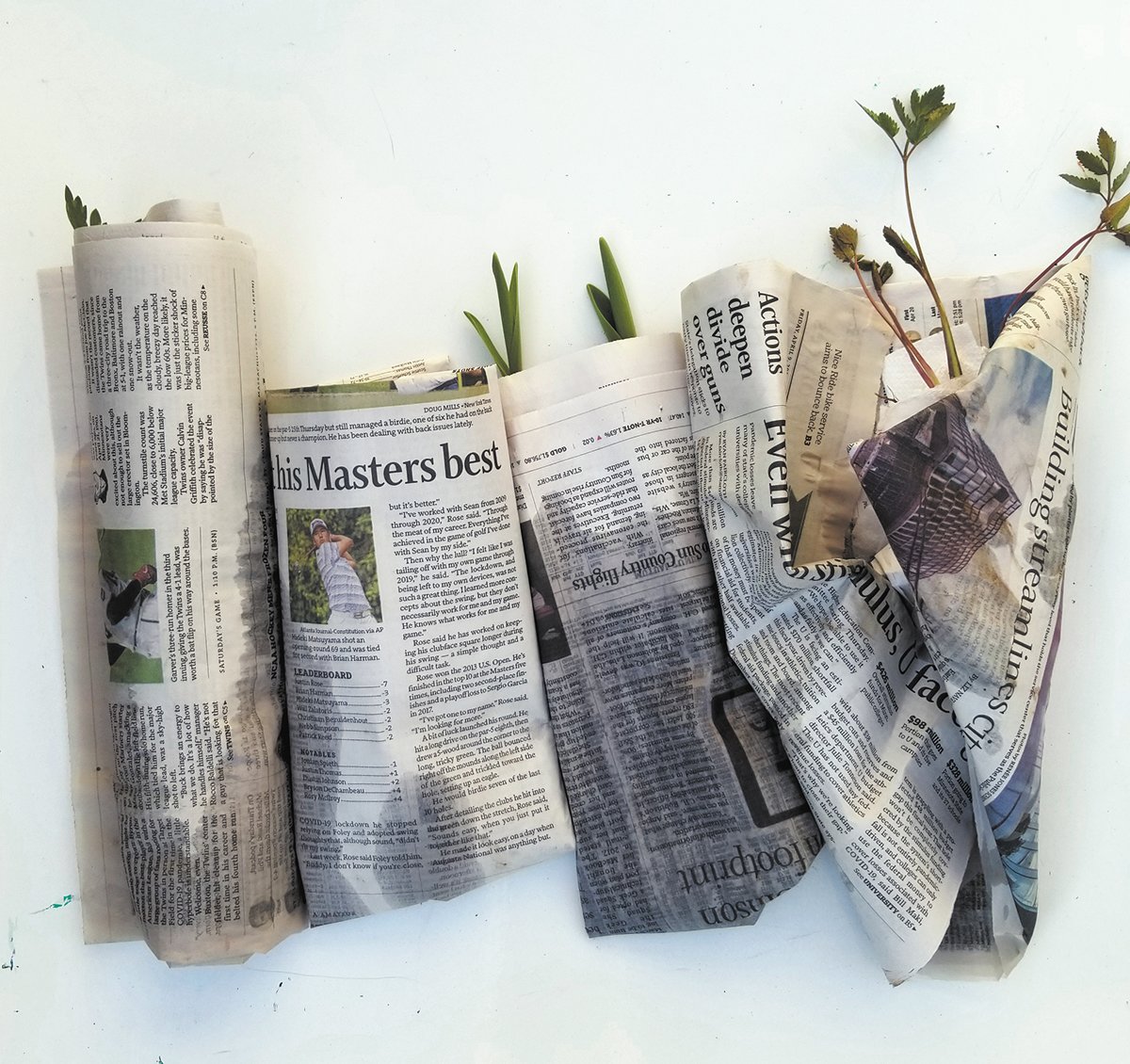 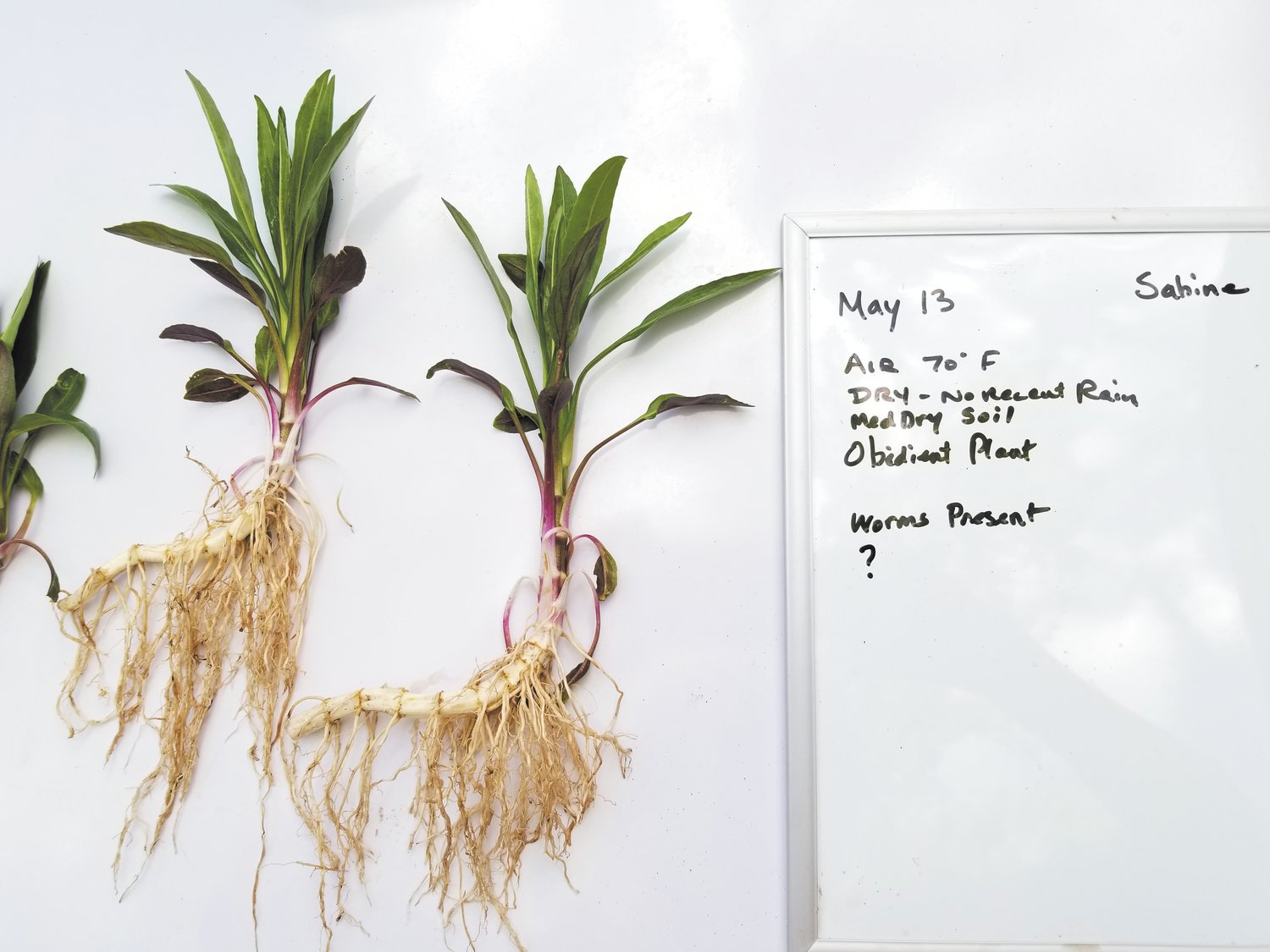 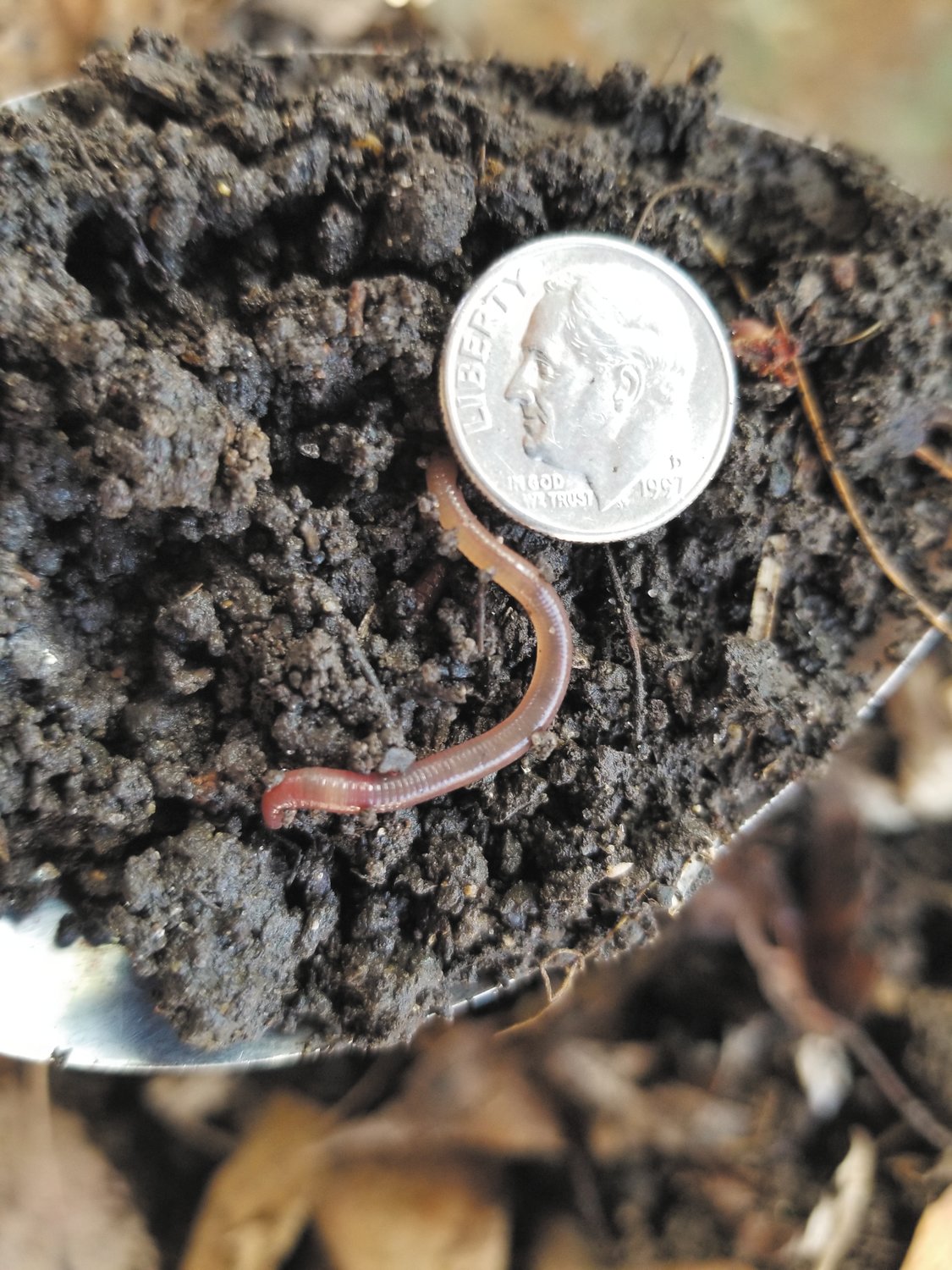 Photo of small juvenile jumping worms. These are in a terrarium at Julie Vanatta's home. Specimens were collected from infested gardens in St Paul and Edina. 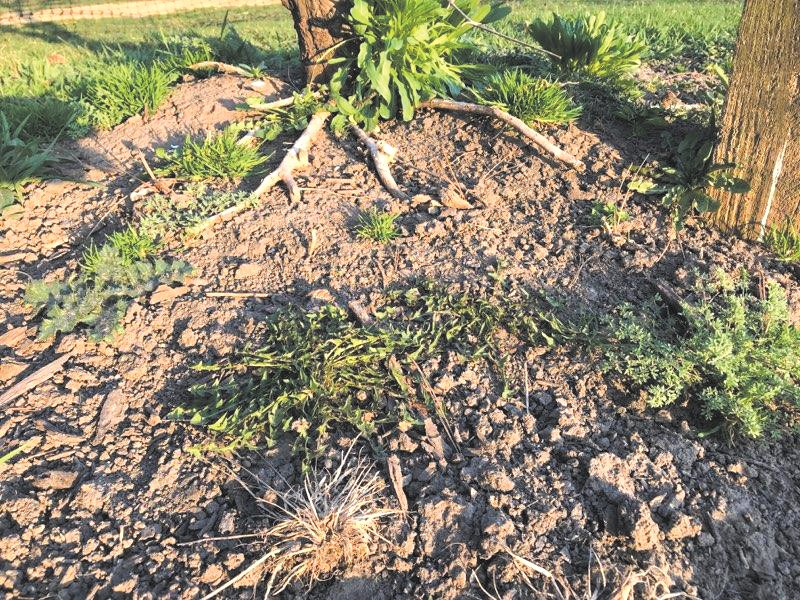 The photo illustrates exposed tree roots where jumping worm infestation had consumed all the mulch and soil, leaving castings that washed away.
Previous Next
Posted Wednesday, May 26, 2021 5:48 pm
By Julia Vanatta

Two years ago few of us had heard of jumping worms. Now they're all the rage, gardeners have a panic attack every time they find a common nightcrawler.
Due to the Ice Age, no earthworms are native to Minnesota. This new species of invasive jumping worms, Amynthas species, is native to eastern Asia. They are a greater threat than previously introduced worm species as they consume essential nutrients in the horizon soil layer, damaging both plant and wildlife habitat. Unlike common earthworms, jumping worms consume wood mulch and roots, converting them to castings that resemble coffee grounds. Because they reproduce rapidly, it doesn’t take long for an area of your garden to become infested.
Jumping worms have been in the U.S. since the late 1800s and were first recorded in Minneapolis in 2006. In 2015, Longfellow resident Andy Holdsworth, who completed his PhD thesis on invasive earthworms at the University of Minnesota, discovered and reported jumping worms found in his compost pile to the Minnessota DNR. Many wonder why they just are now becoming a problem. One theory is climate change, another is how species will adapt to survive. In any event, in the past 10 years they have begun to spread more rapidly through the U.S. and are beginning to cause serious harm.
I began my own quest to learn more about jumping worms in 2020, just after hosting a Wild Ones Twin Cities donated plant sale in my back yard. I became concerned and began to look for any sign of jumping worms in areas where we had staged the sale. I tested two areas using a mustard water drench, which brings all earthworms to the surface. Learning how to assess risk areas in our landscapes and identifying jumping worms when they are young are key to containing their spread.
Lifecycle begins as eggs in a miniscule cocoon that overwinters in soil. Most cocoons from last year will hatch in May / June; they prefer moist soil. Cocoons may also lay dormant until conditions are favorable, even through a second winter. Each cocoon produces from one to 15 hatchlings.
Hatchlings are juvenile jumping worms. They do not have the distinct white ring (clittelum) and look similar to other small earthworms. If juveniles are detected there are likely more in the immediate area. Juveniles have the same acrobatic skills as adults; they are fascinating to watch. Most info websites have lots of information on adults, very little on juveniles.
Large, adult earthworms found in the spring are not jumping worms; they are likely nightcrawlers that burrowed below the frost line for the winter. Adult jumping worms are found July through early October – once you see one you’ll never forget. Unlike nightcrawlers, juvenile and adult jumping worms die when soil temperature drops below 40° F. They feed on wood mulch, leaves and compost. Once the duff layer is gone jumping worms will feed on roots. If you notice a patch of mulch that has disappeared, you likely have an infestation; look for their “coffee-ground” castings. A heavy rain may wash away the castings leaving plant and tree roots bare and unprotected. Each adult jumping worm will lay up to 20 cocoons. There may be a second population later in the season.

You can protect your gardens and limit the spread of jumping worms.
First, there is no need to panic. Researchers are testing various controls – hope is on the way. And despite the intense damage that can be caused by jumping worms, gardeners who do have infestations can implement practices that limit their spread. Simple steps like keeping tools and shoes clean, avoiding transfer of soil from one part of a garden to another, and collecting / disposing of adults as they appear will keep populations in check. If you do not have jumping worms there are many things you can do to avoid getting them.
For avid gardeners and volunteers: Sharing plants with friends or importing mulch, compost and soil to your garden increases the risk of bringing home jumping worms or their cocoons, which easily blend into soil. If you volunteer in public parks or gardens, have a plan in place to clean your shoes and remove all soil from any tools before you leave one site and travel to another. In my own gardens I have collected and contained soil from three high risk areas. If cocoons found their way to my garden I am hoping one will hatch within these containers so I can confirm where, within my garden, I have an infestation. High risk areas are near boulevard sidewalk, potting bench and along a path where a landscape crew did some work. I also avoid spilling soil when I move plants, tools and yard waste. As for sharing my garden favorites, bare rooted plants have become the new necessity, something we are just beginning to learn how to do.
For hikers or mountain bikers: Keep a boot brush handy to clean tire and shoe treads. Yeah, I know, it's a discipline that may be difficult to adhere to, but to protect our gardens and natural areas, especially local treasures like the Mississippi River Gorge and Minnehaha Falls, we all need to do our part to reduce the risk of carrying these cocoons into a new area.
If you do find jumping worms: Please be responsible and confirm, report and let your neighbors know so we can all work together to limit their spread. We can do this!

Learn more:
• Learn more about jumping worms and tips for protecting gardens by visiting Wild Ones Twin Cities Wild Ones Twin Cities YouTube channel. Visit Great Lake Worm Watch for latest updates.
• Wild Ones is hosting bare root clinics and demonstrations in Longfellow now through June 11. More will be scheduled in the fall.
Julia Vanatta has been a homeowner and active member of Longfellow Community in Minneapolis since the late 1970s. Getting serious about gardening roughly 20 years ago, Vanatta has used her own gardens to experiment and learn all she can about native plants and the wildlife they support, especially insects. For the past 15 years, Vanatta has been active as a leader in various capacities for Wild Ones Twin Cities. More recently she started the Facebook group, Native Plant Gardens in the Upper Midwest, a discussion group where members engage in an exchange of ideas and practices for local ecosystem gardening.