'Immigration lawyers, do not burn' 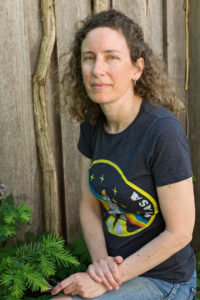 Local attorney Eva Wailes has been talking with her 11- and 14-year-old sons about his death, and how to push back against racism, bullying, injustice, and unfairness when they see it. She said, “We have to keep the focus on why this happened.” (Photo by Margie O'Loughlin)[/caption]

Attorney Eva Wailes got a message from her boss last Friday, May 29, 2020 that their building had been damaged by protest fires. The windows of the Wilson Law Group (3019 Minnehaha Ave.) were boarded up. Someone had spray painted, “Immigration lawyers, do not burn!” across the plywood window coverings – and the building was still standing. The Third Precinct Police Station across the street was gone, as were the post office and most of the surrounding businesses.

She said, “Several of us came over on Saturday morning to save what we could, and to move some things out of offices. We thought the building might not survive the next night. There are 60-65 people who work here. Everybody had masks on and we were trying to social distance, but I hugged two of my co-workers because it seemed the right thing to do. We hadn’t seen each other since the pandemic started. Some people were sweeping up broken glass. I started gathering everybody’s framed documents and other official things. I brought them home for safe keeping.”

To look at the major intersection of the Longfellow commercial district right now is to see burned out shells of buildings and towering piles of rubble. Eva is eager for the businesses and organizations to thrive again but, she said, “We have to re-build the human community as well as the buildings that will house them. When we feel the same outrage against systemic racism and police brutality – and we take action like we do when there’s property damage and clean-up – then we’ll be getting somewhere.”

On Thursday, June 4, George Floyd’s memorial service was held. Eva has been talking with her 11- and 14-year-old sons about his death, and how to push back against racism, bullying, injustice, and unfairness when they see it. She said, “We have to keep the focus on why this happened.”