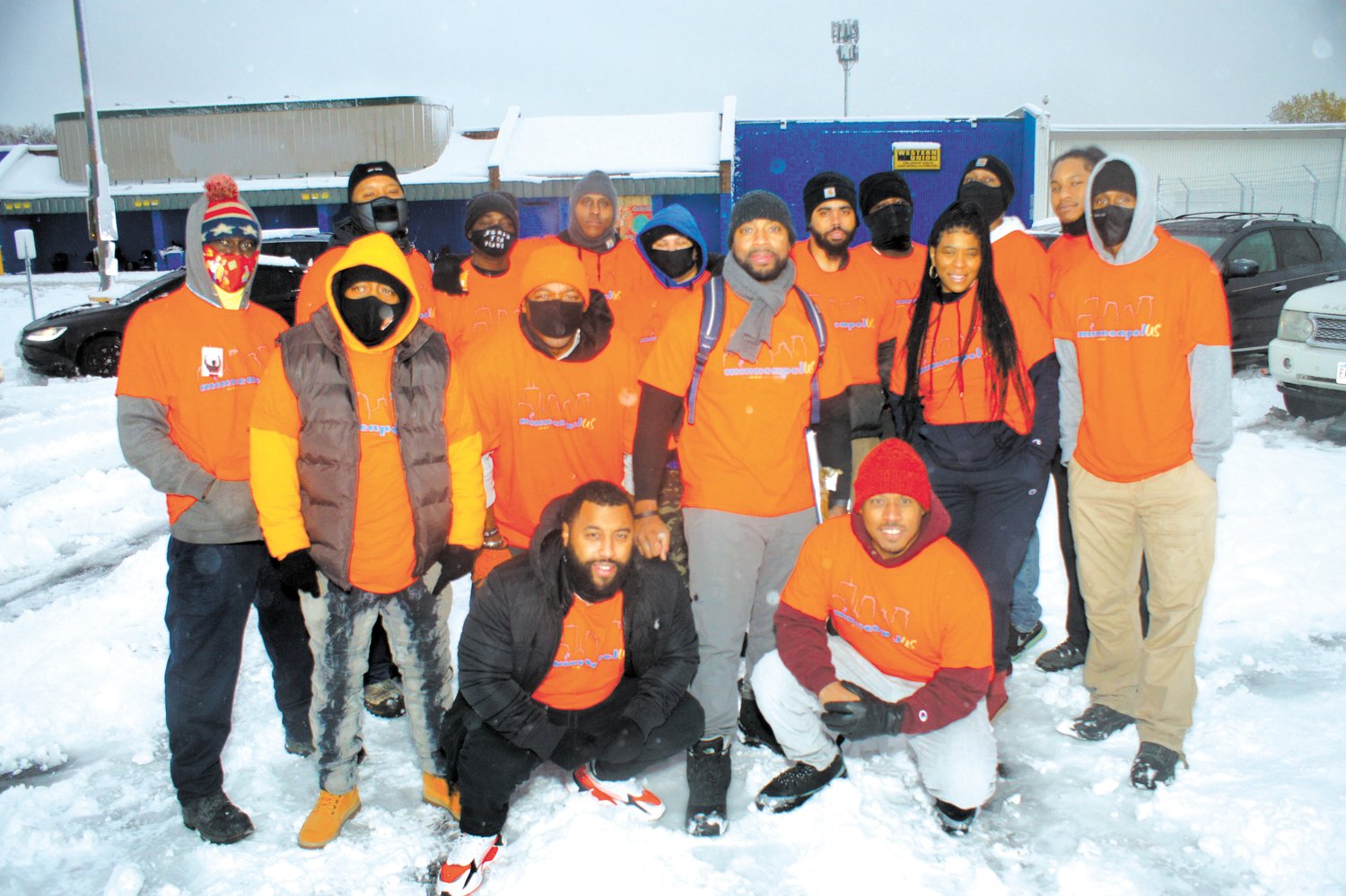 The Violence Interrupters gathered in the former K-Mart parking lot before going on patrol along Lake Street on Wednesday, Oct. 21, 2020. (Photo by Terry Faust) 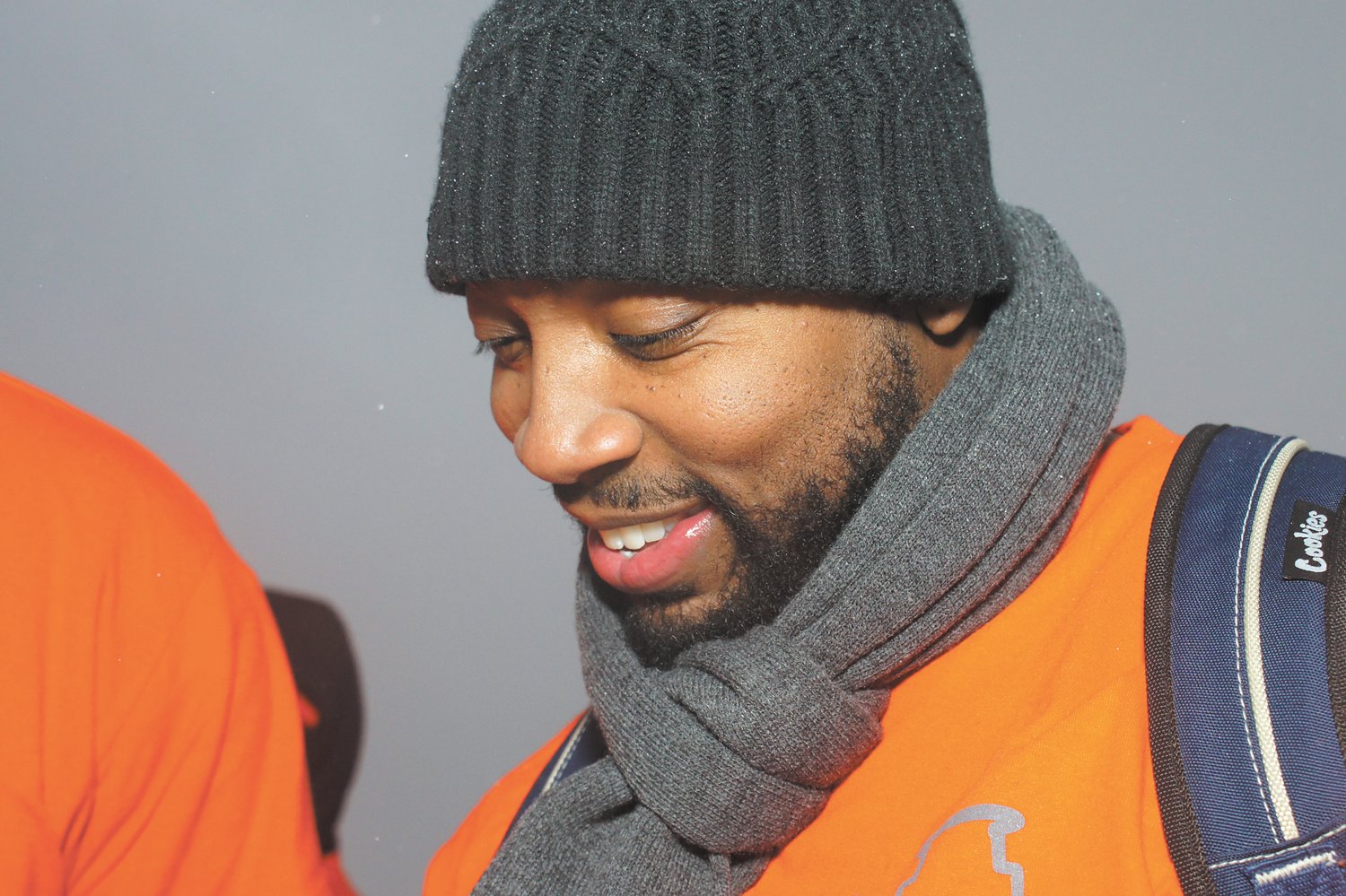 Violence Interrupter Muhammad Abdul-Ahad doesn't let the weather stop him from going out in South Minneapolis. (Photo by Terry Faust) 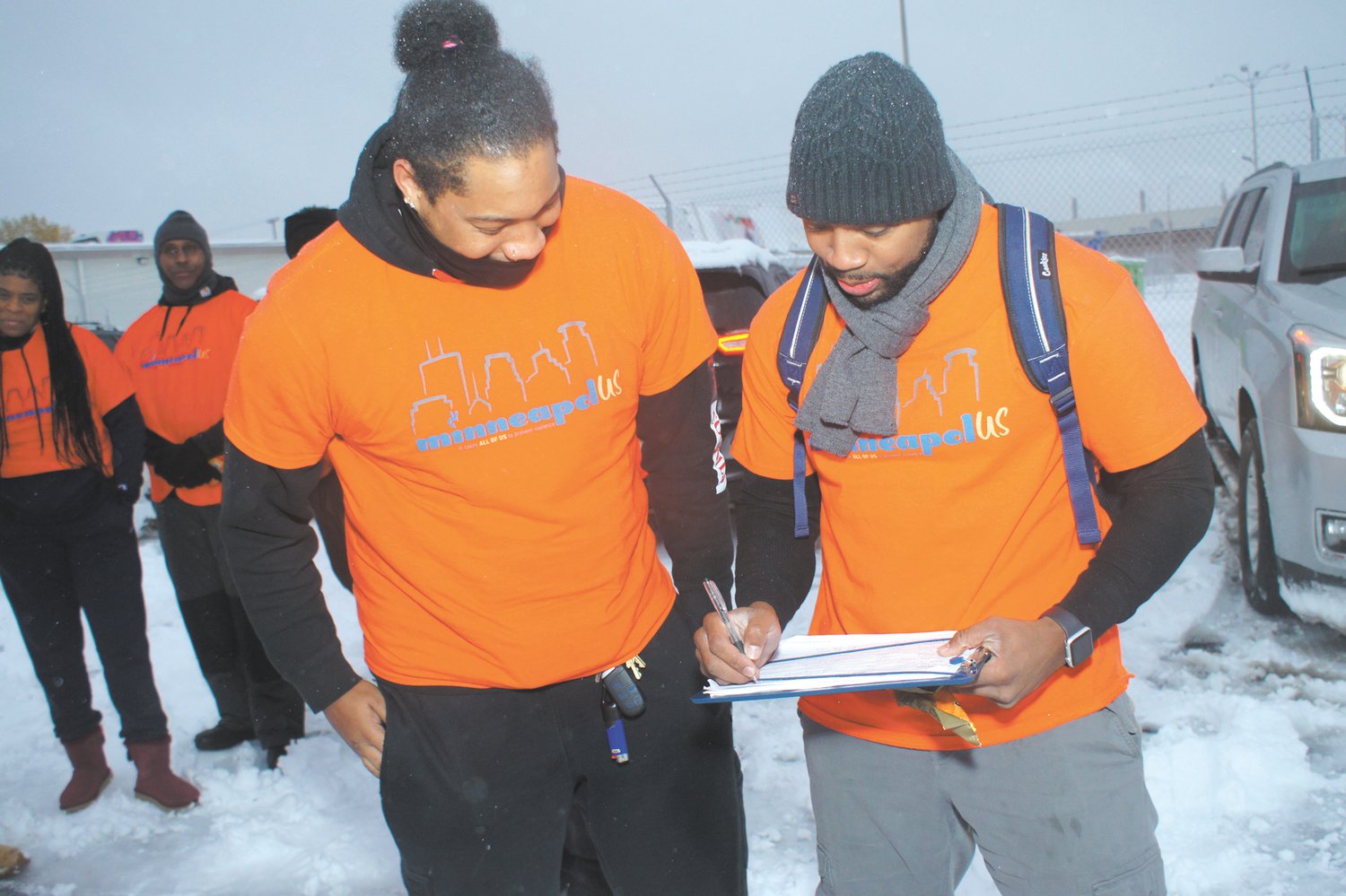 A young man on a South Minneapolis street was fighting against heavy odds. Seven other youths were attacking him. But someone intervened.
“We took 10 guys and encircled the young man and got him to safety,” said Muhammad Abdul-Ahad, a leader for the group of Violence Interrupters that patrols the Longfellow neighborhood.
“I put the kid in an Uber and got him out of there,” Abdul-Ahad stated. “We were able to get the story. The young man had lost his brother to gun violence a year earlier, and the group surrounding him had had something to do with his brother’s death.
“The situation could have been deadly,” Abdul-Ahad recalled. “There’s not always time to plan, sometimes you just have to de-escalate. But this intervention was successful.”
Breaking up fights or arguments before they become violent and police need to be called is the major goal of the Violence Interrupters, a group that was started in September through the MinneapolUS initiative. The group members are hired by the Office of Violence Prevention (OVP).

‘Doing what we should have a long time ago’
“We started in south Minneapolis, first walking the Lake Street Corridor from uptown to 35W,” said Jamil Jackson, another Violence Interrupter. “There’s a group that goes from Chicago to Hiawatha, and between 38th and Lake St. Two groups have also started on the north side.”
Jackson, a consultant for OVP, said he put the proposal together, based on a similar Violence Interrupters group in Chicago called Cure Violence. He also founded Change Equals Opportunity, an organization that provides mentorship for Black youth.
“Our goal is to engage the community, primarily by being violence interrupters,” Jackson continued. “We provide resources for kids and remove barriers causing some of the violence. We work with the community as a whole, but we primarily focus on youth.”
He said there are now a total of 80 male and female Violence Interrupters on both the north and south sides of Minneapolis.
“After the violence, looting, rioting, defunding the police and large numbers of police officers leaving, there was a need for the community to pull itself up and start doing what we should have been doing a long time ago,” Jackson said.

Focus on youth
Abdul-Ahad, who has been doing community outreach for the past 30 years since growing up in the Philips neighborhood, said the MinneapolUS initiative was a couple years in the making.
The members of the Violence Interrupters had to go through training, including training in de-escalation.
“Some have also had past difficult experiences with the police,” Abdul-Ahad said. “Being a part of the Violence Interrupters gives those persons an opportunity they didn’t have in the past, a second chance of giving back to the community.”
He said there is a lot of engagement, because violence can spread like a disease.
Abdul-Ahad also runs Teaching Our Urban Communities Hope (TOUCH), an outreach group for kids affected by trauma and violence.
“The young are our future,” he stated. “We need to give them opportunities early, the opportunities we didn’t have.” He said it is important to work with the younger generation, who can communicate effectively with their peers.
Even though the program has just begun, Jackson said the Violence Interrupters have already seen success. “The community is helping us identify some of the troubled youth. Young people are calling us and asking us for support. We are having youth participate in focus groups, and we are listening to them.”
Jackson said the Violence Interrupters are developing relationships with the youth, but that takes time. “They have been lied to and taken advantage of, and we are the new kid on the block, so we need time. We are also building relationships with schools and parks.”
“These are not bad kids,” stated Abdul-Ahad. “They just have nothing to do and nothing to look forward to. They don’t understand the consequences of their actions before it’s too late.”
Both men agreed that COVID-19 has not helped the situation. “COVID-19 is a burden,” said Jackson. “We have had to go door-knocking. We need to reach the schools, but they are closed. We’re looking for a warehouse space for youth to come to us.”
“Getting community centers open is so important,” Abdul-Ahad remarked. “The youth are getting so frustrated, which accounts for part of the uptick in violence. COVID-19 kills people, but our youth are dying faster by gun violence.”

‘It will take all of us’
The Violence Interrupters are out on the Minneapolis streets six nights a week. They use walkie-talkies to communicate with each other, as well as other groups walking other streets. And the group leaders have walkie-talkies that connect to dispatch.
The program has been hailed by most of the community, but there are some critics that claim walkie-talkies and experience won’t match up against violence.
Jackson has a response to those critics. “We can’t sit back and try nothing,” he said. “Building relationships is the most important piece. If critics have other suggestions, we are willing to listen to them.
“It will take all of us,” he noted. “The Violence interrupters, the community, businesses. Businesses need to offer employment, because the biggest contributor to violence is poverty. We need to help kids succeed in life.”
And what of the young man who was being attacked and was delivered to safety by the Violence Interrupters?
“He called us and thanked us,” Abdul-Ahad said. “He said we saved his life and also made him look at his life differently. And he is thinking of getting involved with MinneapolUS.”