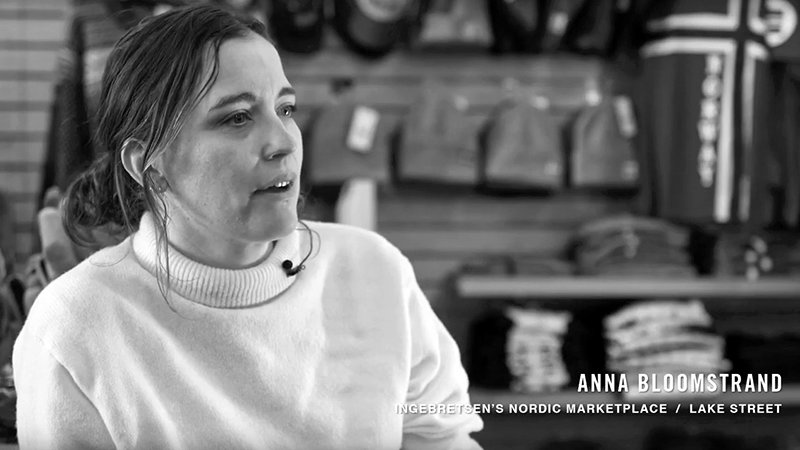 Anna Bloomstrand of Ingebretsen's talks about their business in the mini-documentary. (Photo submitted) 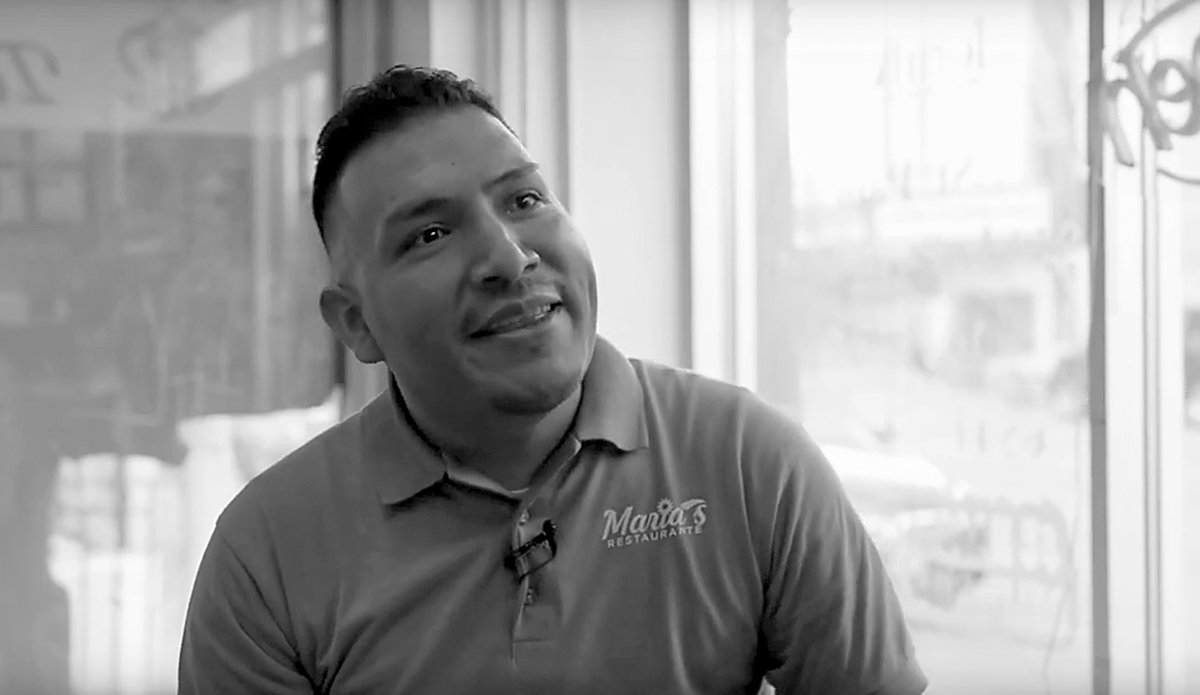 Fidencio Cruz of Maria's Restaurante talks about their business in the 12-minute "Corridors."
Previous Next
Posted Wednesday, July 28, 2021 8:29 pm

If you thought the 350 or so Minneapolis and St. Paul small business owners on Lake Street and West Broadway in Minneapolis, and University Avenue in St. Paul’s Midway who watched their businesses get damaged or destroyed in the civil unrest following the murder of George Floyd one year ago were giving up on their dreams, you would be wrong.
What the civil unrest took away has made them stronger and even more determined than ever to rebuild their businesses and reimagine their futures and the futures of their communities.
“I will not quit until I know I can’t go on anymore,” said Wonneda Hing, owner of Universal Hair Design located in St. Paul’s East Midway/West Frogtown neighborhood. “So, I will strive to find some funding, some loans, to help my dream.”

Resiliency inspires Restore-Rebuild-Reimagine Fund
It’s this determination that’s fueling a new fundraising effort supported by a coalition of businesses and nonprofits to help Minneapolis and St. Paul small businesses directly affected by civil unrest to reconstruct their operations.
Formed by the Minneapolis Foundation, the community-based Restore-Rebuild-Reimagine Fund (RRRFund.org) started with a challenge grant from the Delta Dental of Minnesota Foundation and received donations so far from Target Corporation, the Donaldson Foundation, and Mortenson. In creating the fund, the goal is to raise at least $20 million within the next year.
“I am personally inspired by the determination of these small businesses to rebuild,” said Rod Young, CEO and president of Delta Dental of Minnesota. “Because of their fighting spirit and the love for their communities, we’ve joined with other major businesses and neighborhood nonprofits to accelerate their rebuilding efforts. Through our Foundation, we want to build on their momentum.”
These businesses are partnering with the Lake Street Council, the West Broadway Business and Area Coalition, and the Midway Chamber of Commerce in St. Paul, and raised funds will be directed and distributed through the Minneapolis Foundation’s Restore-Rebuild-Reimagine Fund. Complementing these efforts, Minneapolis-based Mortenson, one of Minnesota’s largest construction companies, has been providing pro bono services and technical consultation to assist impacted businesses, and connecting affected business owners with local minority-owned contractors for services.
“The physical restoration of these main corridors in our community is vital,” said Lynn Littlejohn, Vice President of Community Affairs and Development for Mortenson. “Much has been accomplished so far, but a significant amount of work remains. Time becomes a factor the longer we wait. That’s why we need to act now and act decisively to restore these three key cultural and business corridors.”

Mini-documentary brings
resiliency to light
The world was shocked when images of burning buildings, smashed facades, and looted businesses flooded their screens one year ago.
Today, new images are emerging – of small business owners on Lake Street, West Broadway and University Avenue more determined than ever to reimagine their futures.
Their stories are captured in their own words in a new 12-minute mini-documentary called Corridors, which shares how businesses on Lake Street and West Broadway in Minneapolis, and on University Avenue in St. Paul’s Midway neighborhood, were damaged or destroyed, how the community came together to help, and why owners are passionate about staying in their neighborhoods, rebuilding their businesses and reimagining their futures. The documentary is available to watch on RRRFund.org.
The mini-documentary was created in support of the Restore-Rebuild-Reimagine Fund and serves as a call-to-action to encourage further philanthropic investment in the vital Minneapolis and St. Paul communities affected by the civil unrest.
“These small business owners are part of a long-standing legacy of immigrants who came to Minnesota to forge a new future for themselves and their adopted new home,” said R.T. Rybak, President of the Minneapolis Foundation. “Many fled wars and strife in their homelands. There’s no one who understands better what it means to rebuild than these business owners. That’s why we’re investing in them.”

Restoring hope; reimagining the future
Donations to the Restore-Rebuild-Reimagine Fund will be used specifically to help small businesses impacted by the civil unrest re-construct their businesses. These efforts range from minor repairs to store façades to the complete reconstruction of buildings.
“We’ve learned in our community outreach efforts over the past year that many of these small businesses were underinsured,” said Littlejohn. “The Restore-Rebuild-Reimagine Fund will help fill that gap.”
But what’s very clear, according to the Corridors documentary, is the will of these small business owners to survive and thrive.
“I want to build a building. How realistic is that dream?” asked K.B. Brown, owner of Wolfpack Promotionals LLC on West Broadway in Minneapolis’ Jordan neighborhood. “I’m an entrepreneur. I don’t believe in failure. I’ll make it happen.”

Giving to the Restore-
Rebuild-Reimagine Fund
Business and community leaders and individuals who want to help small businesses on Lake Street and West Broadway in Minneapolis and University Avenue in St. Paul rebuild, can give directly to the Restore-Rebuild-Reimagine Fund at RRRFund.org, by emailing rebuild@mplsfoundation.org, by calling 612-672-3867, or texting “REBUILD” to 243725. Donations of all sizes are being accepted. Donations will be administered to local businesses by the Minneapolis Foundation’s Restore-Rebuild-Reimagine Fund.
“The strength of Minneapolis and Saint Paul is when we come together and help each other out,” said Rybak, “There’s a lot of momentum behind the Restore-Rebuild-Reimagine Fund and we invite everyone who cares deeply about these communities to consider giving.”
“I’m hoping that we can form alliances and people who do have the means can partner with those who don’t. I hope we can have these partnerships,” said Christina Le, who owns Lake Wine & Spirits with her husband, both immigrants from Vietnam. “It’s hard to do something alone. We would like to stay here as long as possible, grow with the city, and reinvest our time and money into our neighborhood again. No guts, no glory!”