Stakeholders question city rhetoric while neighborhood funding is cut to a base of $10,000 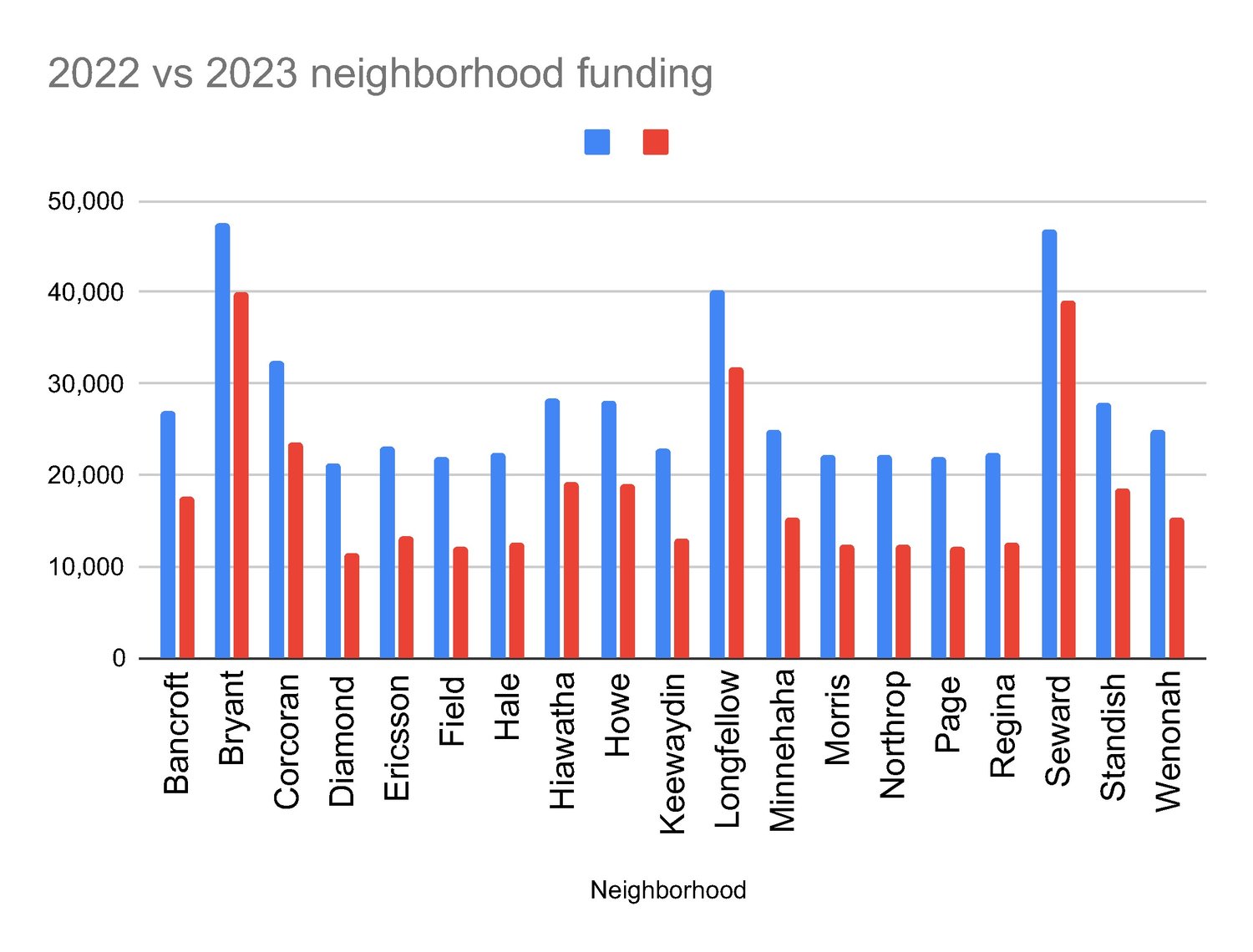 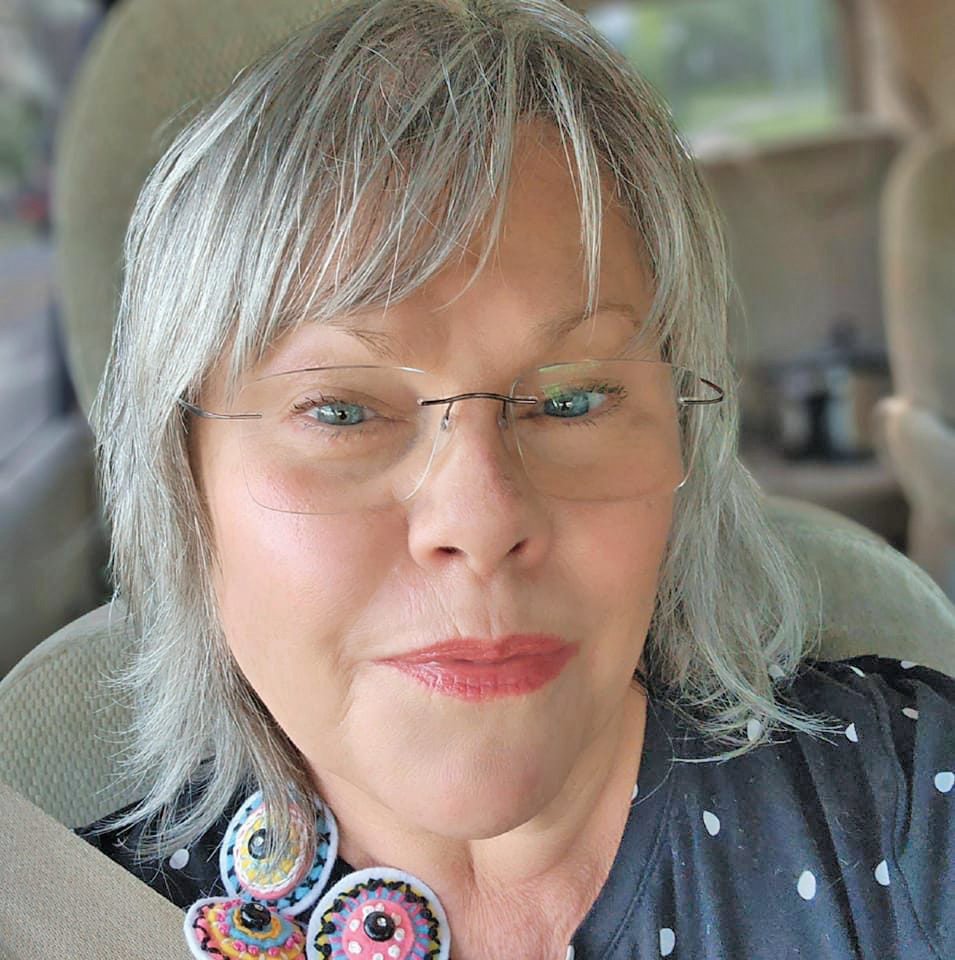 SENA has almost 10,000 stakeholders in our neighborhoods. How are we supposed to effect change for $3 per person per year?”
Candace Miller Lopez
CORRECTION FROM PRINT EDITION

Editor's note: Since we first started working on this article in summer 2022, Standish-Ericsson Neighborhood Association has gone through a number of changes. Candace Miller Lopez left the organization effective Aug. 31, and SENA moved out of its office at 4557 34th Ave S. Kate Gens is the sole employee of the organization, as its administrative coordinator; she has been working for the organization for a year. Given the changes, SENA has not sent out a newsletter since July 2022, has not made a social media post about the changes, and has not posted an update on its website about the changes. We apologize for the error in our print edition when we referred to Miller Lopez as executive director.

Next year, most neighborhood organizations in Minneapolis will receive less financial support from the city than they have in decades, if the mayor’s proposed budget is approved.
Under the proposal, every neighborhood organization in the Longfellow-Nokomis area faces funding cuts.
The Standish-Ericsson Neighborhood Association (SENA) is one of the groups whose funding will be decreased. “We had been receiving almost $80,000 from the city, but moving forward we will only be getting $30,000, one-third of which cannot be used for general operating expenses,” said Candace Miller Lopez, who was SENA's executive director until recently. “While we appreciate the need to focus on equitable engagement, $20,000 is not enough to support the kind of infrastructure and capacity needed to effectively conduct the kind of outreach and engagement efforts expected by the NCR and the city council.”
The mayor’s proposed budget for 2023 follows guidelines previously approved for the Neighborhoods 2020 program, and includes $3.1 million allocated through three programs specifically for neighborhood organizations. That includes $840,000 in the Neighborhood Network Fund, $2.16 million in the Equitable Engagement Fund, and $100,000 in the Collaboration and Shared Resources Fund. Last year these three funds received over $3.7 million.
The Neighborhood Network Fund supports day-to-day operations of the city’s network of 70 neighborhood organizations. These funds can be used for the administration and operating expenses, and provide the same base level of funding for each neighborhood. In 2023, each neighborhood will receive only half what they get this year, dropping from $20,000 to $10,000.
The Equitable Engagement Fund will increase by roughly $170,000 and goes to neighborhoods in varying amounts based on their designation as a concentrated area of poverty, evidence of gentrification and the number of cost-burdened households. Funding is provided to support activities that focus on equity and increased participation in neighborhood decision making.
The Collaboration and Shared Resources Fund provides resources to support the consolidation or the sharing of resources among neighborhood organizations.
In addition to the $3.1 million dedicated to neighborhood organizations, the mayor has proposed $250,000 to go into a Partnership Fund. This fund may be used by separate community-based organizations who partner with recognized neighborhood organizations to engage underrepresented residents.

NRP TO NCR TO CCP
The amount of overall funding going to neighborhood groups is lower than it has been for decades. From 1990-2010, after the Neighborhood Revitalization Program (NRP) was established as a joint initiative by the state legislature and city council, $20 million a year was dedicated to support neighborhood groups and projects from property taxes that would have otherwise gone to the city, county schools and parks.
When the program ended in 2011, the city established a new Neighborhood and Community Relations (NCR) department and, prior to creating the Neighborhoods 2020 program, formed the Community Participation Program (CCP). In the 2019 resolution to develop the Neighborhoods 2020 program, the council set the minimum base funding for neighborhoods at $25,000. At one point a city work group recommended a funding level of $10 million a year for neighborhood support with a higher minimum, but the city council at the time directed staff to cap it at $4.1 million.
The base funding was lowered to $10,000 following a report the city commissioned from the University of Minnesota’s Center for Urban and Regional Affairs (CURA). The report examined neighborhood funding using a racial equity lens and analyzed data from 1990-2019. It concluded, “The combination of NRP I and II, CPP, neighborhood associations, and City of Minneapolis management reveals a system of institutional racism.” Within the limit of the $4.1 million annual budget CURA found that a “$25,000 base funding allocation is racially inequitable.”
According to the plan approved in 2020, and subsequent budget amendments, 2023 will be the first year the base funding reaches $10,000 per neighborhood.
The report ended saying, “The City of Minneapolis will also have to consider the tension between maintaining a city-wide network of neighborhood organizations and allocating money in a racial equitable way. Part of that tension exists because of how much money is available in the program as a whole.”

ORGANIZATIONS CAN’T PAY STAFF
Brandon Long is feeling that tension as executive director for the Nokomis East Neighborhood Association (NENA) that includes four neighborhoods – Keewaydin, Minnehaha, Morris Park, and Wenonah. “The city’s funding cuts are having a catastrophic impact on NENA’s ability to serve its residents,” he said.
As a result of the redistribution of available funds, SENA has had to close its office and now operates virtually. Lopez’s executive director job will be ending, and SENA will transition to having a part-time administrative staff.
“The potential for the network of neighborhood associations to fundamentally impact racial and socio-economic disparities through grassroots, high-quality programming has been undermined by the lack of funding,” said Lopez. “SENA has almost 10,000 stakeholders in our neighborhoods. How are we supposed to effect change for $3 per person per year?”
Michael Jon Olson is also concerned. While currently Seward Neighborhood Group Director, and Nicollet Island East Bank Neighborhood Association Coordinator, he stressed he was speaking for himself when he said, “The fact that the City of Minneapolis has significantly decreased its funding for neighborhood organizations at a time when it has increased its rhetoric about engaging underrepresented groups demonstrates that the city and its department of Neighborhood and Community Relations (NCR) do not take broad community engagement seriously.”
Olsen has worked with community engagement organizations for 25 years, served on the boards of Ventura Village, Inc., the Longfellow Community Council, and the Center for Neighborhoods. Formerly, he was coordinator of the Cedar Isle Dean Neighborhood Association and executive director of the Hamline Midway Coalition in Saint Paul. “Any community organizer worth their salt knows that engaging renters, immigrant communities, communities of color, and other oft underrepresented populations in a meaningful way requires a sustained commitment of time, attention, energy, and resources,” he said.

‘HUSHING THE COLLECTIVE VOICE OF THE PEOPLE’
The Longfellow Community Council (LCC) put out a formal statement in response to the proposed budget. “The city and NCR have demanded fundamental systems change from neighborhood organizations while at the same time stripping away funding,” they wrote. “The concept of creating an equitable civic participation system as declared within the Neighborhoods 2020 funding program is spot on. However, the failure comes from not providing the resources needed for neighborhoods to be successful in that work.”
Concerns are being raised elsewhere in the city, as well. The Armatage Board, for example, said, “Over the decades, neighborhood organizations have connected not just neighbors with each other but to their elected officials, resources to help address needs, educational programming, and more.” They continued, “As the city budget continues to reduce financial support for many neighborhoods in favor of non-geographic-based organizations, we risk disenfranchising large sections of the city, cutting communications between the people and the decision makers, and losing a critical and irreplaceable part of what makes Minneapolis unique and special.”
“The new funding program’s additional goals of ‘recognizing the core and vital service neighborhood organizations provide’ and ‘building people’s long-term capacity to organize to improve their lives and neighborhoods’ while critical are also not achievable given actual funding levels,” wrote LCC. “Almost all neighborhood organizations are dependent on the city for funding as the neighborhood system was created by the city itself to serve Minneapolis residents. Over time, this new program will effectively eliminate neighborhood organizations, hushing the collective voice of the people.”
“Any attentive observer of the city and NCR can suss out their end-game,” said Olsen, “a city where neighborhood organizations are under-resourced to the point that they become completely ineffective or simply non-existent. Ironically, if the city has its way, the only neighborhood organizations that will continue to exist and be effective are those that are, indeed, bastions for wealthy home-owners.”
“Elected officials love to attend our free community events for photo ops and outreach and use us as information disseminators and trusted community partners yet they expect us to do so for essentially zero pay,” said Long. “It is clear that the city’s strategy is to slowly starve organizations like NENA’s until they merge and dramatically decrease the number of these neighborhood organizations.”
“More than half of all neighborhood organizations will receive less than $19,300 starting next year,” said LCC. “For many, the new program is designed to phase them out.”

CITY COUNCIL COULD AMEND BUDGET
The city council will be considering amendments to the mayor’s proposed budget in the weeks ahead but so far it is unclear if any work is being done to make any changes in funding to neighborhoods.
“It’s too early for me to say whether or not I plan to make amendments to the mayor’s 2023-2024 recommended budget,” said Ward 11 Council Member Emily Koski. “I absolutely support neighborhood organizations and know the value that they bring to the City of Minneapolis.”
Koski served on her own neighborhood group board in the past. She said, “I know about the struggles they are facing around funding, staffing, and I want to help neighborhood organizations, NCR and the City of Minneapolis in finding solutions.”
The city council’s budget committee will be meeting throughout the month with public hearings on the budget set for Nov. 10, at 10 a.m., Nov. 15 at 6:05 p.m. and Dec. 6, 6:05 p.m. when the approval of a final amended budget is expected.