News for everyone, delivered to everyone
Minneapolis prepares for Derek Chauvin trial

Lake St. businesses discuss what to do in uncertain times, ask if they will be on their own 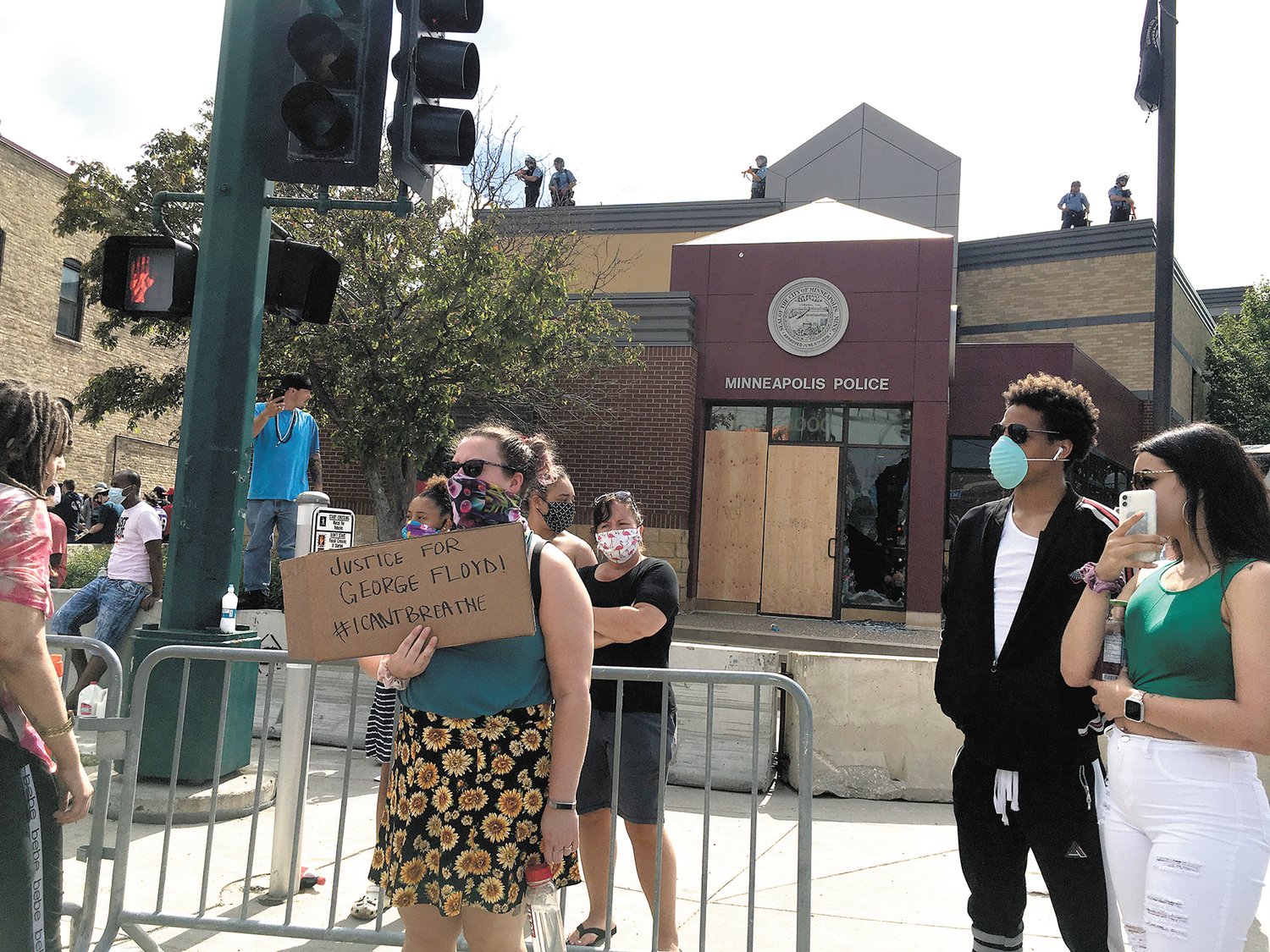 - A combination force of police officers and National Guard members will be stationed at various area. Locally, these may include E. Lake St. and Hiawatha, and E. Lake St and Chicago.

- A curfew may be ordered.

- Roads may be blocked off and closed.

– Fencing will go up and down in parts of downtown Minneapolis and other locations.

- The Government Center downtown will not be handling any other business but the trial starting on March 8. Use alternative sites if you need to get tabs, record deeds or other business.

- Sixth St. S. will be closed to pedestrians and vehicles near the Hennepin County Courthouse beginning March 1.

- Back up data and move important documents to another location.

- Connect with neighbors and other businesses owners.

- Sign up for city updates according to your neighborhood at https://www.minneapolismn.gov/contact-us/sign-up-for-news-alerts/

- The city planned to release a information in late February through the CPED department with guidance for how property owners can prepare for the risk of property damage.

Should Longfellow businesses board their windows and doors again prior to the start of the Derek Chauvin trial?
Should they plan to stay overnight at their business?
How will the city balance the right to protest with protecting local buildings from fire and looting?
What is the city doing to keep people informed? What platforms are being used for communication?
Will the Longfellow area, and particularly the space around the Third Precinct, be a place protestors return to?
Various meetings in February gave business owners a chance to ask questions, connect and plan ahead before the March 8 jury selection begins in the trial of former police officer Derek Chauvin, who is charged with murdering George Floyd in front of the Cup Foods at 38th and Chicago.
The Longfellow Business Association Board met on Feb. 10, 2021, discussed how to prepare for this uncertain time, and followed it up with emails.
“Many of you had businesses damaged or were sleeping there overnight. Many of you have trauma. Whether there’s unrest again, feeling a sense of security and knowing you’ve done what you can to prepare will help,” observed Kim Jakus of the Longfellow Business Association (LBA).
As of that meeting, no one from the city had reached out to the LBA and its member businesses in an area hit hardest by fire and property damage last summer. Business owners expressed their surprise and disappointment about that, and questioned whether they would be on their own again.
Kennedy and Cain law offices is located at E. Lake and 34th. Dan Kennedy observed that their building was not damaged last summer, in part, he believes, because the neighbors blocked off streets at night during the unrest and patrolled the area.
To do this well, neighbors need to know what constitutes “usual” traffic. Does a business have deliveries made at 3 a.m.? Do they have workers coming and going throughout the night or early morning hours? How can they manage their unconscious biases?
BIPOC and LGBTQI employees of some of the businesses along Lake Street were harassed by neighborhood watch groups who didn’t recognize them, a problem pointed out by Anna Tsantir of Two Betty’s Cleaning Co. (4010 E. Lake).
Kennedy remarked, “People on the street were highly effective. It was also great for community building. My block, like many others, is a pretty diverse block. People got to know each other.”
They gathered for a BBQ over the summer, and have stayed in touch. When he sees people walk past his business now, he recognizes them. “I feel better about neighborhood security because I know my neighbors, and they know me,” said Kennedy.
“The property destruction in May galvanized neighborhood cohesion. That may have prevented further property damage in May, and may do so again.”

‘What is the city’s plan?’
During last summer’s protests, protesters parked in the neighborhoods and then walked to sites such as the Third Precinct at Minnehaha and Lake. Businesses asked: can the city use jersey (concrete) barriers to block off additional traffic at key intersections to prevent folks coming in by car who may want to cause damage?
They also expressed concern about the area around the Third Precinct during the trial, where many businesses were destroyed by fire, including Minnehaha Lake Liquor, GM Tobacco, Gandhi Mahal, Minnehaha Post Office, MIGIZI, the El Nuevo Rodeo building (with Town Talk Diner, Scores Sports Bar and others), Cash N Pawn, Arby’s, Domino’s, Auto Zone, Wendy’s, and an apartment building under construction. It took months for Aldi, Target, Cub and the library to repair their buildings and reopen, and other smaller businesses and those in the Coliseum remain closed.
Businesses want to know what plans the city has for their neighborhood.
They also asked where people should go to protest. Some businesses are discussing how to keep the area around the Third Precinct safe for businesses and any protest gatherings and not a place for escalation.

‘How do we stand together?’
Cathy Heying of The Lift Garage (2401 E. Lake) said they also had minimal damage to their building although they were located next to the Arby’s that burned down. “We were here 24/7. People would come up with baseball bats to the building. I’d say, ‘Can I help you?’” recalled Heying. ‘Oh is this your building?’ they’d ask. When she said, ‘yes,’ they’d apologize and leave.
“It worked for us,” stated Heying. “What if it is just us again? How do we stand together as a community and care for one another?”
Last summer, some businesses communicated via text with their staff members who were out protesting, which helped them keep track of what was happening as it occurred.
Other blocks used platforms such as Discord, WhatsApp, GroupMe, and Signal.
“People look to organizations like ours to derive some idea of what to do,” said Kennedy.
The group is discussing how to move forward, and has begun reaching out to city and police staff, partner organizations and others with their questions.

What can South Minneapolis expect from the police department and city when the Derek Chauvin trial begins?
MPD Chief Medaria Arradondo other members of his staff connected with people during a meeting organized by the Lake Street Council on Thursday, Feb. 18, 2021.
“You all have been the soul of Lake Street. This year has been an incredible test,” Lake Street Council Executive Director Allison Sharkey remarked to the 155 people who attended the Zoom meeting. “I can’t tell you have thankful I am that you all have continued to be here.”
“We are working to move the police department forward in creating a new MPD,” said Chief Arradondo as he began the update.
“I believe we need to look for spaces to restore hope in our communities. We don’t want our businesses to shut down.”
He stressed that the first amendment right of protesters will be protected, and he drew a line between those that are protesting peacefully and those engaging in violence or civil disobedience who will be arrested. MPD Chief Arradondo acknowledged that as a result of a court order in August initiated by the Minnesota Department of Human Rights, authorization for crowd control weapons and “non-lethal force” can only come from him or his designee.
According to Chief Arradondo, what makes this time different is that MPD has been preparing for it for eight months. The department has had conversations with various people and groups, which they did not have time for after the death of George Floyd on May 25, 2020.
This time around, there will be a more visible police presence that is augmented by up to 1,900 National Guard members, some of whom live in Minneapolis. Another 1,000 will be in St. Paul. Law enforcement agencies including the state patrol, Hennepin County Sheriff’s Department and others from across the state are assisting MPD. There will be one central command center instead of trying to coordinate from different locations, and MPD will take the lead.
Officers will be embedded in the Minneapolis Fire Department so that firefighters can get to a fire.
The city is committed to make sure 911 calls get through, and is working to increase staffing levels.
Those along Lake St. can expect to see officers and National Guard humvees in the area as a preventative measure, according to Chief Arradondo.
The mayor will have the ability to put curfews in place based on the situation at the time.
There are a few ways for people to stay informed.
“GovDelivery and the City’s Neighborhood Community Relations department will be working to disseminate information to all relevant community partners,” according to Matt Kazinka of the Lake Street Council. “They will aim both to share accurate information about activities and counter disinformation. Groups like Lake Street Council will help share this information.”
Block leaders are encouraged to connect with businesses owners and neighbors, and to also reach out to crime specialist Kali Pliego at kali.pliego@minneapolismn.gov.
The city’s Community Planning and Economic Development (CPED) department was expected to release a FAQ sheet/checklist at the end of February for businesses on how to prepare for the trial.