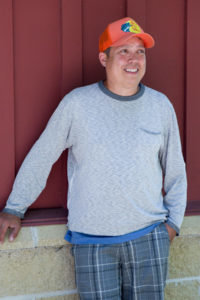 Troy Houle is a lifelong Longfellow resident. His parents still live in the house he grew up in. He lives just a few blocks from them, as does his sister.

Troy has been a Minneapolis Park Board employee for more than 25 years. He said, “They call me a ‘senior man in the system’ now.” He has worked a second job at East Lake Liquors for more than 20 years, and knows this neighborhood like the back of his hand.

Troy said, “My family and friends are all from right here. A lot of the buildings that burned down, they’re what our neighborhood is about. They were part of our history. It feels like we’re starting over.”

Adjusting the brim of his fishing hat, Troy continued, “I’ve always been a strong minded person. Normally, I’m really confident about being out in the neighborhood but little things scare me now. We’re coming up on the Fourth of July and the firecrackers are really hard to listen to. I keep wondering if my block is safe, my daughter, my neighborhood, my neighbors?”

Liquor stores were hit hard in the unrest following George Floyd’s murder. Troy said, “With Minnehaha Liquors and Chi-Lake Liquors closed down, we have a lot of new customers at East Lake Liquor. I used to know most of the people who came in to the store. People are coming from outside the neighborhood now, and it feels like everybody is on edge.”

Troy credits the owners of Star Auto (and their friends and neighbors) with saving several businesses on E. Lake St. from looting and arson. He said, “There were 30-40 people every night of the curfew protecting Star Auto, ACE Hardware, the Longfellow Market, and East Lake Liquors. We have a lot to thank them for.”

Echoing what many people in the neighborhood are feeling, Troy said, “The experience has made me more vigilant, more aware of my surroundings. I check in on my parents 3-4 times a week now. Our neighbors have gotten a lot closer. It’s like that saying, ‘If you see something, say something.’ Everybody’s talking more, because we know how quickly things can change.”

'How about: Building a better department?'