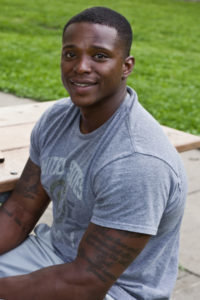 Dre Vann started coming to Brackett Park in the Longfellow neighborhood when his gym closed in March. He and his friends use the Depression-Era concrete picnic tables as workout benches. They lift free weights, heavy ones, with enviable strength and discipline.

When he saw the video of George Floyd’s murder, Dre hardly even felt it register. He said, “It looked like just another killing of a black man in America. It was a head shaker, but as a black person you’ve got to have that pick up and keep going mentality.”

By Tuesday night, Dre’s anger had grown. He said, “I’ve never done any crimes. I’ve served in the military. Still, I can’t get lost in the wrong neighborhood or walk into most restaurants in the Twin Cities without heads turning and people talking. I am scared every day of my life.”

Dre describes himself as having grown a very thick skin in his 26 years, to keep from getting bruised too bad. He didn’t participate in the protests because he doesn’t feel systemic racism is going to change in this country. He believes the color of his skin is an act of protest he has to live out every single day.

About the protests, Dre said, “I hate to admit it, but I’m glad people burned some things down. If someone’s been bullying you your whole life, it’s not like you’re going to take their lunch money. You’ve got to do something to really get their attention.”

If the world is paying attention right now, Dre questions how long it will last. While he is not convinced that allies will continue to stand up for this cause, Dre said, “I’m glad that people are starting to come out of their comfortable boxes, and entering into the discomfort of talking about really hard things.”