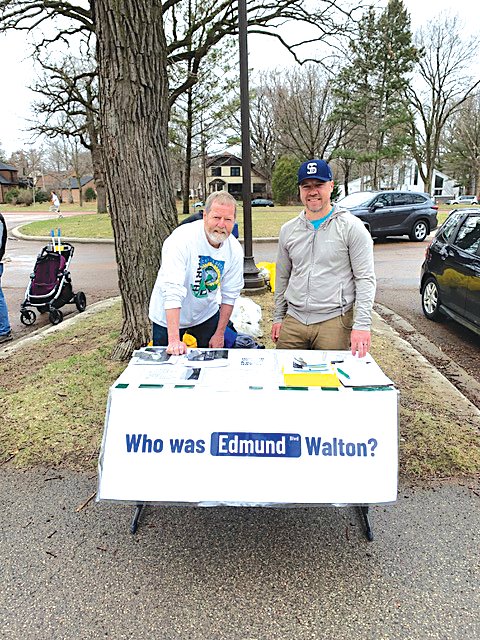 People can share their thoughts about Edmund Boulevard at rethinkingedmund@gmail.com

Edmund Boulevard is a scenic, tree-lined street that parallels the West River Parkway, separated from it by a spacious green median. Many of us cross Edmund each day as we make our way toward the parkway or to the river itself. While we no doubt appreciate the abundant natural beauty, and the fine homes that line the street, how many of us have actually pondered the origin of the boulevard’s name?
Edmund Walton, the boulevard’s namesake, was a prominent real estate developer here in the late 19th and early 20th centuries. He immigrated from England in 1885, and established the Edmund Walton Real Estate Agency in Minneapolis a year later. During the first decade of the 20th century, Minneapolis was expanding rapidly south of Lake Street. Former farmlands were turning into new residential neighborhoods, and being incorporated into the city’s grid. While Walton had developments throughout the city, he was particularly excited about the area along the Mississippi River, between Lake Street and the Ford Bridge. In 1904 Walton wrote to his mother, “Am getting my nose into the biggest suburb I have ever touched, in fact it is so big containing ten thousand plots that I almost hesitate about going in.”
Walton and his business partner, Henry Scott, were the first real estate developers in Minneapolis to follow a national trend of using racially restrictive covenants as a marketing tool. In a Minneapolis Tribune ad, Walton wrote "I appeal to the instincts of those [men] about to marry. Isn't this the most remarkable offering you ever heard of?” He then stipulates that the property, "... shall not at any time be conveyed, mortgaged or leased to any person or persons of Chinese, Japanese, Moorish, Turkish, Negro, Mongolian, Semitic or African blood or descent.” As discovered by the Mapping Prejudice Project, this language was replicated thousands of times in Minneapolis deeds.
In 1905, Walton and Scott secured 347 acres in today’s Longfellow neighborhood and began to feverishly develop and sell the homes within that area. And it was in Walton’s Lyndhurst addition of Longfellow in 1910 that Henry Scott sold the first covenanted home in Minneapolis, to Nels Anderson. The covenant language was nearly identical the one quoted above, though it did not include “Semitics." Walton had not yet opted to exclude Jews in his covenants.
The use of covenants would push and concentrate especially Black residents into relatively few neighborhoods. These areas were later “redlined” by the FHA and other lenders as too risky for housing loans. By contrast, homeowners in covenanted areas were often granted low-interest 20-year FHA mortgages. The cumulative effect was to shut most Black residents out of home ownership, and with that, the principle means of building wealth. As of last year, the rate of home ownership among White residents in Minneapolis was about 77%, while that among Black residents was about 25%.
This is the grotesque legacy from the days of Edmund Walton. Along with redlining, racial covenants offer damning evidence of a systemically racist practice with enduring effects today.
We are hoping that this article, as well as our other efforts, get people talking about this racial disparity, about the type of neighborhood we want to be, and about righting past wrongs. We also hope that along the way, it will occur to many people that perhaps we should not honor so odious a figure as Edmund Walton by having a neighborhood street named after him.
If Edmund Boulevard were to be renamed, the possibilities for a new name are many. A new name could posthumously honor a noteworthy person, commemorate local history, strengthen neighborhood identity, or recognize natural features of the area. In this city, any measure to rename a street needs to be brought to the city council by a 2/3 vote of the residents of that street, or through a direct submission by either the mayor, a city council member, or the public works commissioner.
We acknowledge that changing a street name is a symbolic move, but we respect the power of symbols – they identify us, and say something about us. Right now, our 12 “Edmund Boulevard” signs say something about ourselves and our neighborhood – and that’s a message that needs to be discarded. We also expect that this name change would accompany, and in fact catalyze, more substantive changes.
If you want to learn (or do) more, the Minneapolis 2040 plan has a number of recommendations for expanding homeownership for non-White residents. Right in our neighborhood, the Longfellow Community Council’s Equitable Housing and Development Committee works to identify, research, and plan for increased access to equitable housing in Greater Longfellow.
Just Deeds and Free the Deeds are two local organizations that help city residents identify and discharge racial covenants and offer additional ways to engage neighbors about the legacy of racist housing policies.
Lastly, a number of organizations work to expand equitable access to housing in Minneapolis, including The Alliance, Urban League of the Twin Cities, Twin Cities Habitat for Humanity, United Renters for Justice, and many more.
So, let’s talk about racial covenants and their enduring effect, and how to fix things. Meanwhile, let’s see if we can get the name of a White supremacist off our neighborhood map. To do so would symbolize the hope we all have for a more just, more inclusive community.