News for everyone, delivered to everyone
SMALL BUSINESS

After 2 generations as Bob’s Barber Shop, Nokomis business is for sale 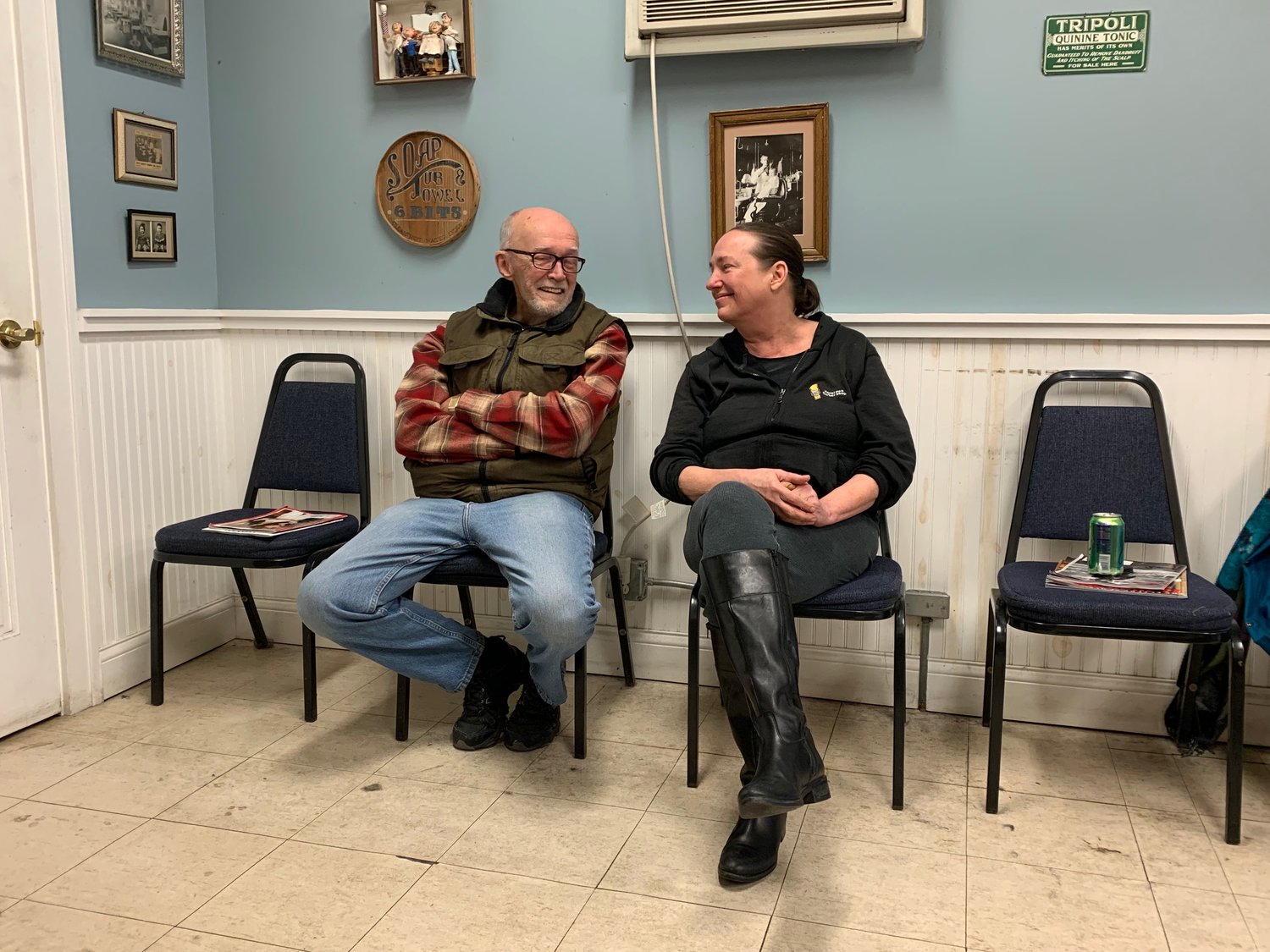 Barber Kristin Ohnstad (right) became the proprietor of Bob’s Barber Shop when her father, Bob, retired 11 years ago. She is selling to move out west. (Photo by Sue Filbin) 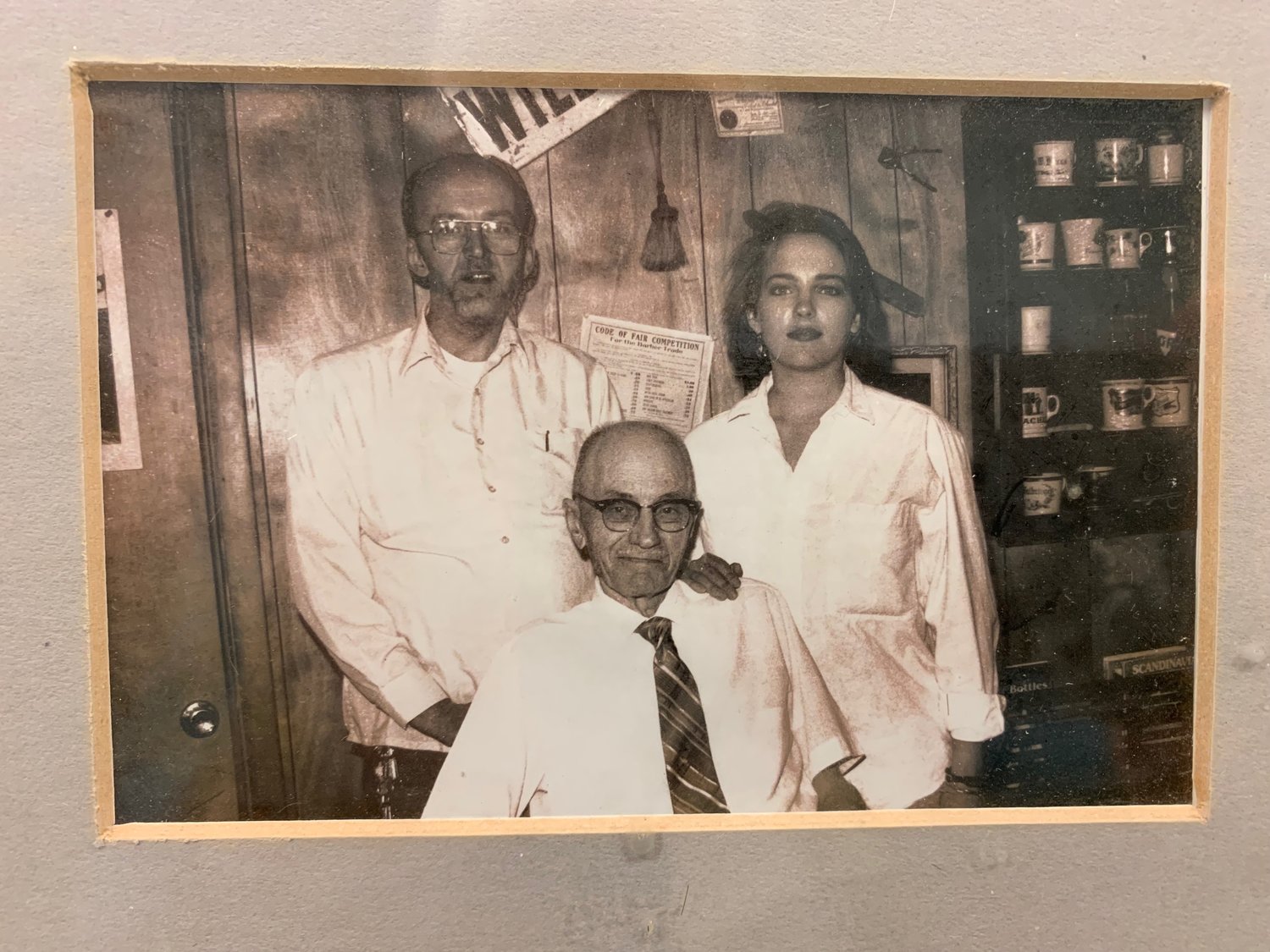 A photo of three generations of barbers in the Ohnstad family – Bob, his daughter Kristin and his late father.
Sue Filbin 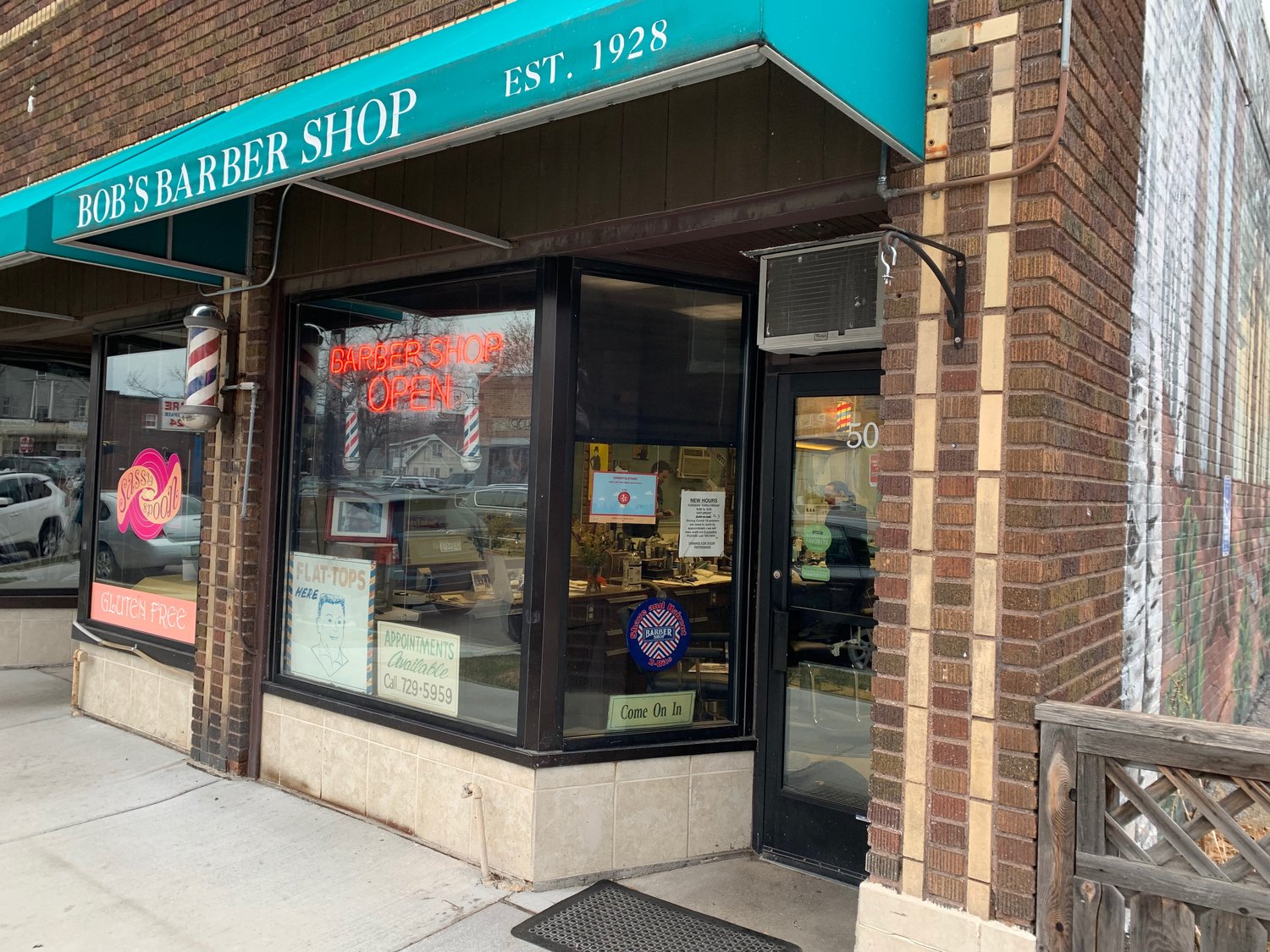 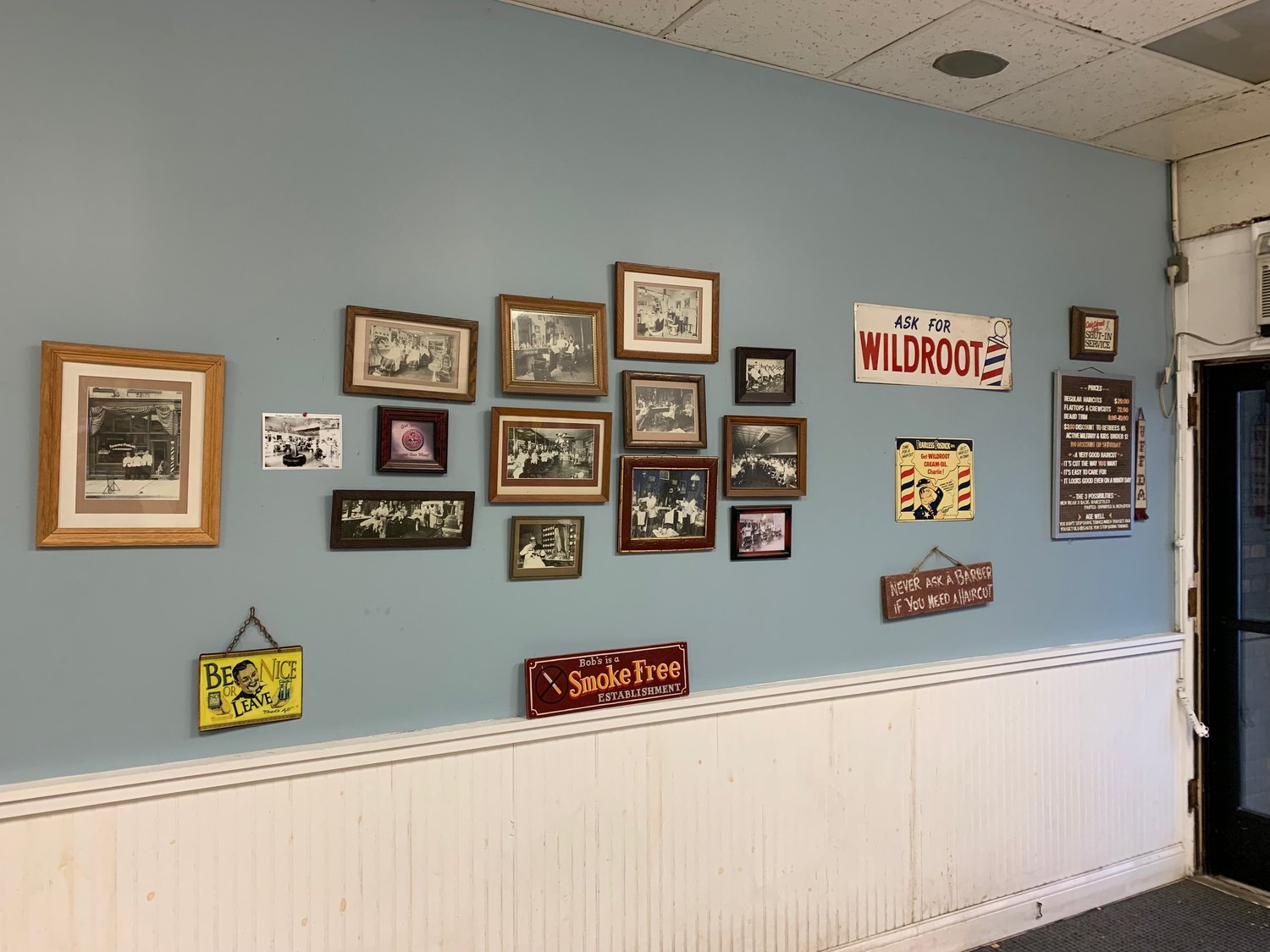 A photo history of barbering is displayed on one wall of 94-year-old Bob’s Barber Shop.
Sue Filbin 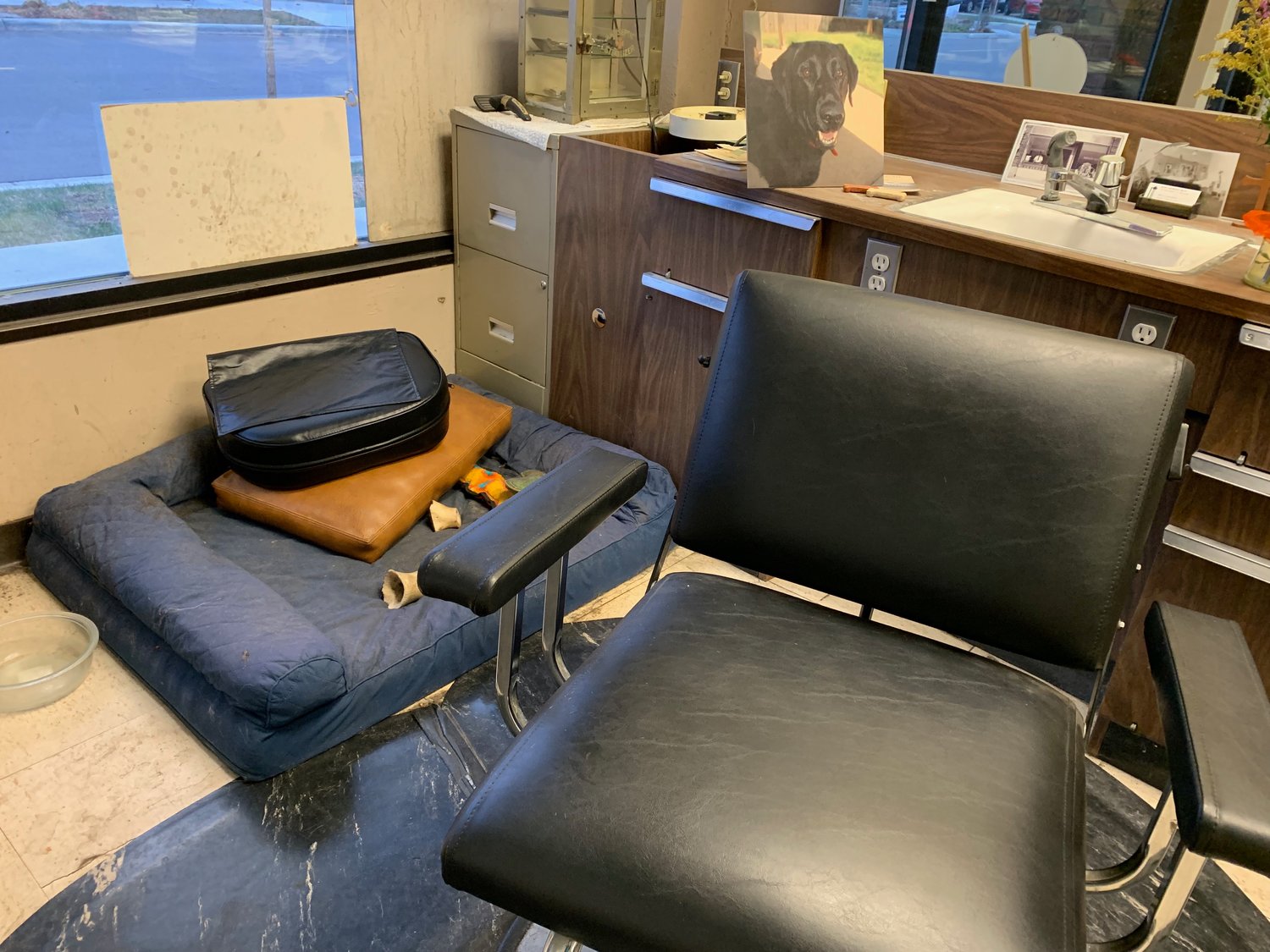 A photo of shop dog Jojo along with his bed retain their positions by the shop’s entrance.
Sue Filbin 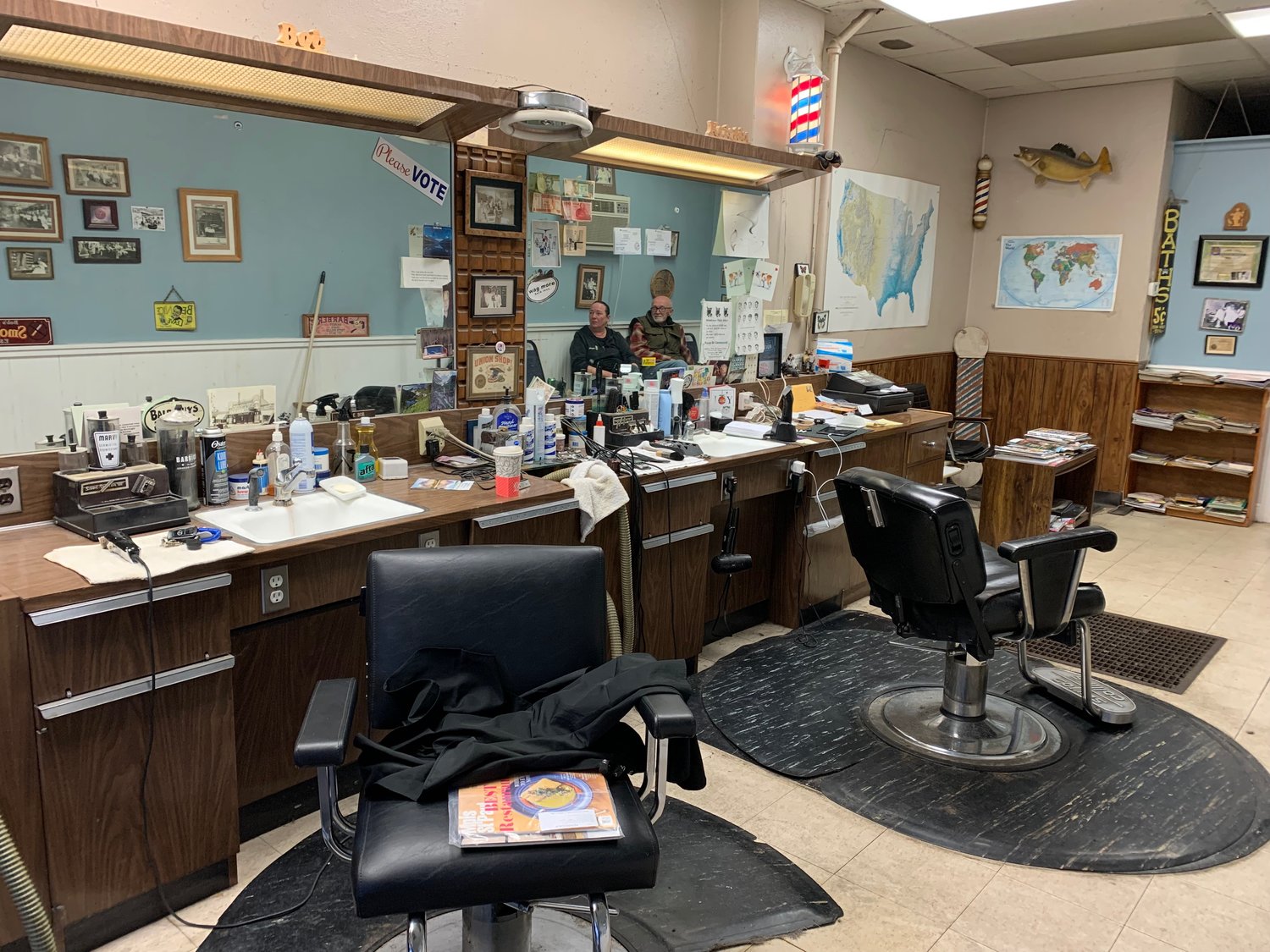 Barbers Bob Ohnstad and daughter Kristin Ohnstad are reflected in the mirror of the barbershop they’ve operated since 1993.
Sue Filbin
Previous Next
Posted Saturday, January 1, 2022 5:11 pm

The three possibilities Men wear three basic hairstyles – Parted, not parted, and departed. Never ask a barber if you need a haircut”
From displays at Bob’s Barber Shop
By SUE FILBIN

Bob’s Barber Shop on 34th Avenue and 50th Street is unlike many barbershops portrayed in popular media. In some ways, getting a haircut at Bob’s is more like spending time in the kitchen of a capable cook – a mix of skill, service, generosity and familiarity.
The space on the alley by Town Hall Lanes has been a barbershop continuously since it was established in 1928. The current décor represents the three generations of barbers in Bob Ohnstad’s family. A framed black and white photo of Bob’s father, himself and his daughter Kristin hangs near pictures that Bob clipped from a book about the history of barbering. Kristin’s contribution to shop ambiance was bringing to work every day her dog Jojo, a black lab she rescued about 15 years ago. He greeted customers from his bed near the front door.

Family history
Another framed photo is of Bob’s parents, who inspired Bob to enter the trade. Bob’s father cut everyone’s hair because only men were permitted to cut hair in the early years of the 20th century. Women customers who wanted their hair styled stepped behind a curtain in the same shop, where Bob’s mother performed finger waves, permanent waves and other styling.
Kristin acknowledged that her father encouraged her to become a barber, in part because she was the only person who cut his hair the way he wanted. She attended Minneapolis Community and Technical College for their year-long barber program. But like her father, who said his own father was instrumental in “... filling in the blank spaces from what he learned in school,” Kristin said, “My father is an excellent barber. He was my mentor. He went to the University to become a teacher, and he taught sixth grade for a few years. He was a good teacher. I absorbed the craft from him.”
In fact, both Bob and his wife earned degrees in education. Bob’s enthusiasm for teaching led him to write a book on haircutting. He also made six videos, and he has a website and a YouTube channel – all about cutting hair:
www.traditionalhaircutting.com
www.youtube.com/bobohnstad
Bob said that customers get the haircut they’ve come to expect for the past years, or at least since he bought the business in 1993. Bob’s specializes in low-maintenance, “wash-and-wear” styles that don’t require gel or tending after the customer leaves the shop. When asked what makes a good haircut, Bob’s reply was that the hair looks good when it’s windblown whereas Kristin said a good haircut grows out beautifully.

Changing
When Kristin took over Bob’s 11 years ago, she decided to keep the name because “. . . my ego is not that big, but name recognition is huge.” And although Bob’s doesn’t have a coffee pot, Bob said that since Kristin took over, the shop is more of a gathering place than it used to be. Perhaps the mellow music Kristin plays has something to do with that. The music also helps her cope with profound personal loss. About five years ago, her partner Tom died suddenly. Less than two years ago, following the unrest in south Minneapolis, Jojo died and Kristin’s car was broadsided by a vehicle being pursued by law enforcement officers. Kristin continues to receive medical care for her injuries.
Three days after Tom died, Kristin was back at work. And the day after the car crash, she had to be at work for the grand reopening of the shop after being closed due to COVID-19. Now, as this article is preparing to be printed, Bob’s Barber Shop is for sale. Kristin will move west to the home she and Tom purchased for their retirement. And she will get a dog to spoil.

Gratitude
Bob said he’s glad he went into barbering. “It’s been good to me. And I’ve been able to attract nice, friendly people. Every day I went to the shop was a good day.” Kristin immediately added, “I want to thank everybody for years and years of loyalty. Our customers have been so loyal to us, and they’ve been such good friends.”