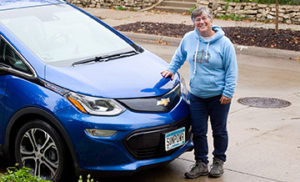 Standing in front of her electric Chevy Bolt, Jean Buckley said, “I use my buying power to make an environmental statement. I believe in making educated, responsible choices.”(Photo by Margie O’Loughlin)[/caption]

Longtime Longfellow resident Jean Buckley believes each of us can make a difference in the current climate crisis.

She said, “I’ve always been a strong environmentalist. I believe every human being has a responsibility to protect earth’s finite natural resources. Some people choose to be what are called ‘first adopters,’ which means taking on higher costs when technologies or products are new. First adopters are willing to bear those initial costs, with relative certainty that the costs will come down when the technologies or products become more main stream.”

Buckley was a first adopter of residential solar energy, among many other things. Ten years ago, she had solar panels installed on her garage roof. That first set of solar panels produced enough energy to power her house until she bought an electric car last year. She is now adding more solar panels to the roof of her home to produce the extra energy she needs.

When the Volkswagen Jetta TDI came on the market, it was the greenest car available. Buckley bought one early on, and was able to sell it back to VW after their emissions scandal broke. With the money from the resale, she purchased an electric Chevy Bolt. This car qualified for a $7,500 federal tax credit. She frequently travels to Duluth to visit her grandchildren. Money from the VW settlement is helping build infrastructure for electric vehicles; this includes more charging stations along highly traveled corridors like 35W.

Buckley has made most of her home improvement decisions from the standpoint of what’s best for the environment. She said, “Many of these choices have higher costs up-front, but I believe they are cost-effective over time. The metal roof I chose for my house cost about 20% more than asphalt shingles. It will last at least 100 years though; I’ll never need to replace it. I’ve lived in my house for 25 years and as someone who hopes to age in place, the metal roof made sense both environmentally and economically.”

On Earth Day 2019, Buckley retired from her job with Ramsey County as an Environmental Health Educator. Prior to that job, she worked for the city of Bloomington. Her areas of expertise included renewable energy, building efficiency, water quality, and recycling. She said, “I had a long career as an educator. I’m still finding ways to encourage people to make positive changes for the environment.”

Buckley is involved in her neighborhood as a Block Club Coordinator. Block Clubs are a function of the city of Minneapolis (visit www.minneapolimn.gov to learn more.) The focus of Block Clubs is often on crime prevention, but can include other things depending on neighborhood interests. On Buckley’s block, she has organized a list of neighbors willing to share tools and skills, or barter for professional services.

She said, “We think our network is even better than Next Door, because it’s neighbor to neighbor on our own block.”

Since retiring last spring, Buckley has literally put on a new hat. She proudly wears a cap that identifies her as a River Educator with the Mississippi Park Connections Program: the nonprofit partner of the Mississippi National River and Recreation Area (the 72-mile section of the Mississippi River that flows through the Twin Cities). The program gives kids the opportunity to get out on the river, and have a national park experience right here in the Twin Cities.

In addition, she volunteers with the Citizens’ Climate Lobby and 350.org on various climate issues such as pension divestment from fossil fuels, and investment in clean energy.

When asked what drives her seemingly endless supply of energy for environmental causes, the matter-of-fact Jean Buckley gave a surprisingly sentimental answer. She said, “It’s the Starfish Story.” So here, in closing, is the Starfish Story (author unknown.)

One day a man was walking along the beach when he noticed a boy throwing something into the ocean. He asked, “What are you doing?” and the boy answered, “I’m throwing starfish into the sea. The tide is going out and if I don’t put them back, they’ll die.” The man said, “Don’t you see that there are miles of beach and hundreds of starfish? You can’t make a difference!” The boy picked up another starfish and gently put it back in the water. Then, smiling at the man, he said, “Well, I made a difference for that one.”

Did you know that every 4th grader in the U.S. can obtain a free pass for themselves and their families to visit more than 2,000 federal lands and waterways for a whole year? The hope is that this “Every

Kid in a Park” will help to

build the next generation of passionate and informed