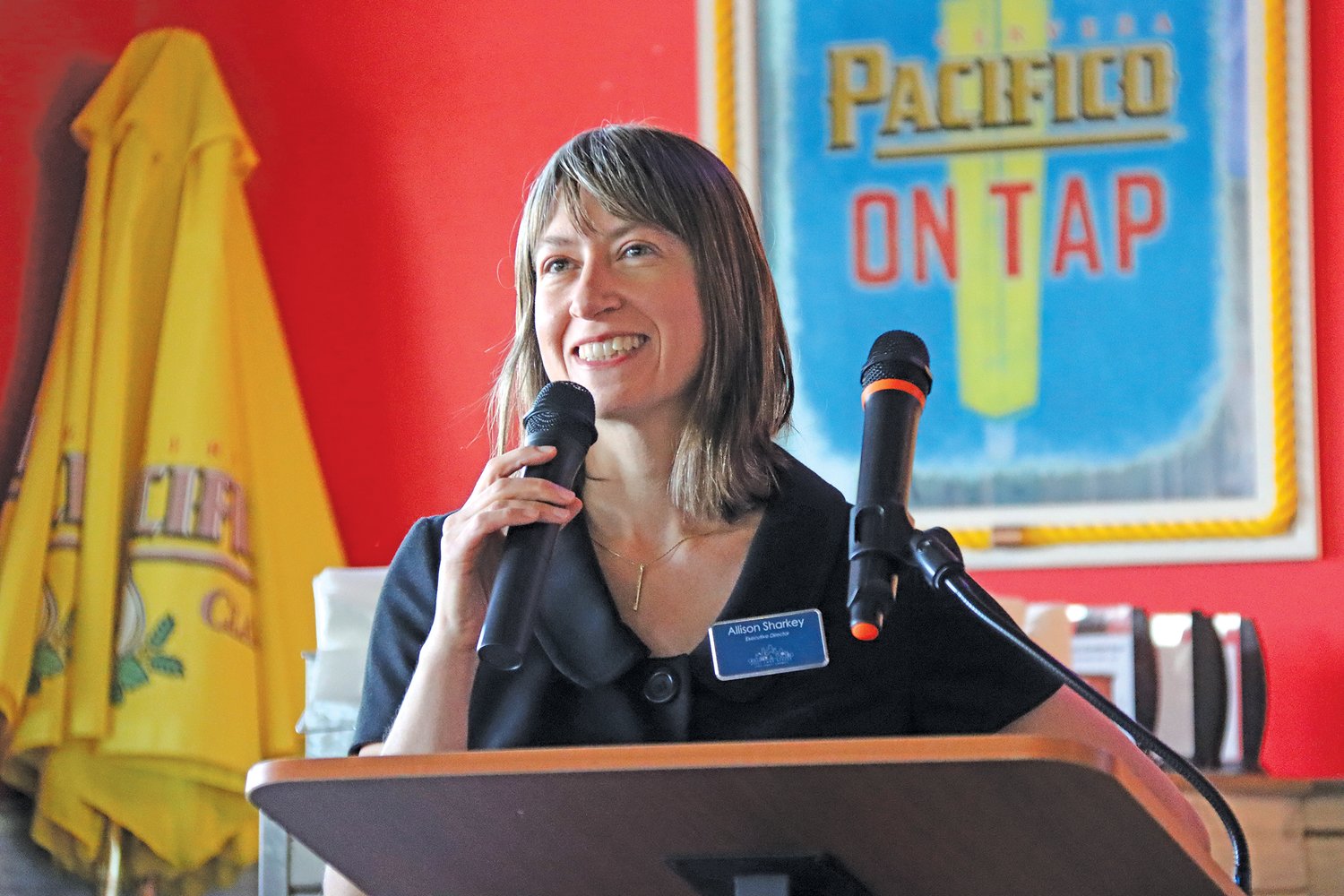 Lake Street Council Executive Director Allison Sharkey said, “Each of us was called to not only help rebuild our community, but also to help address the deep-seated inequities that got us here.” (Photo by Tesha M. Christensen) 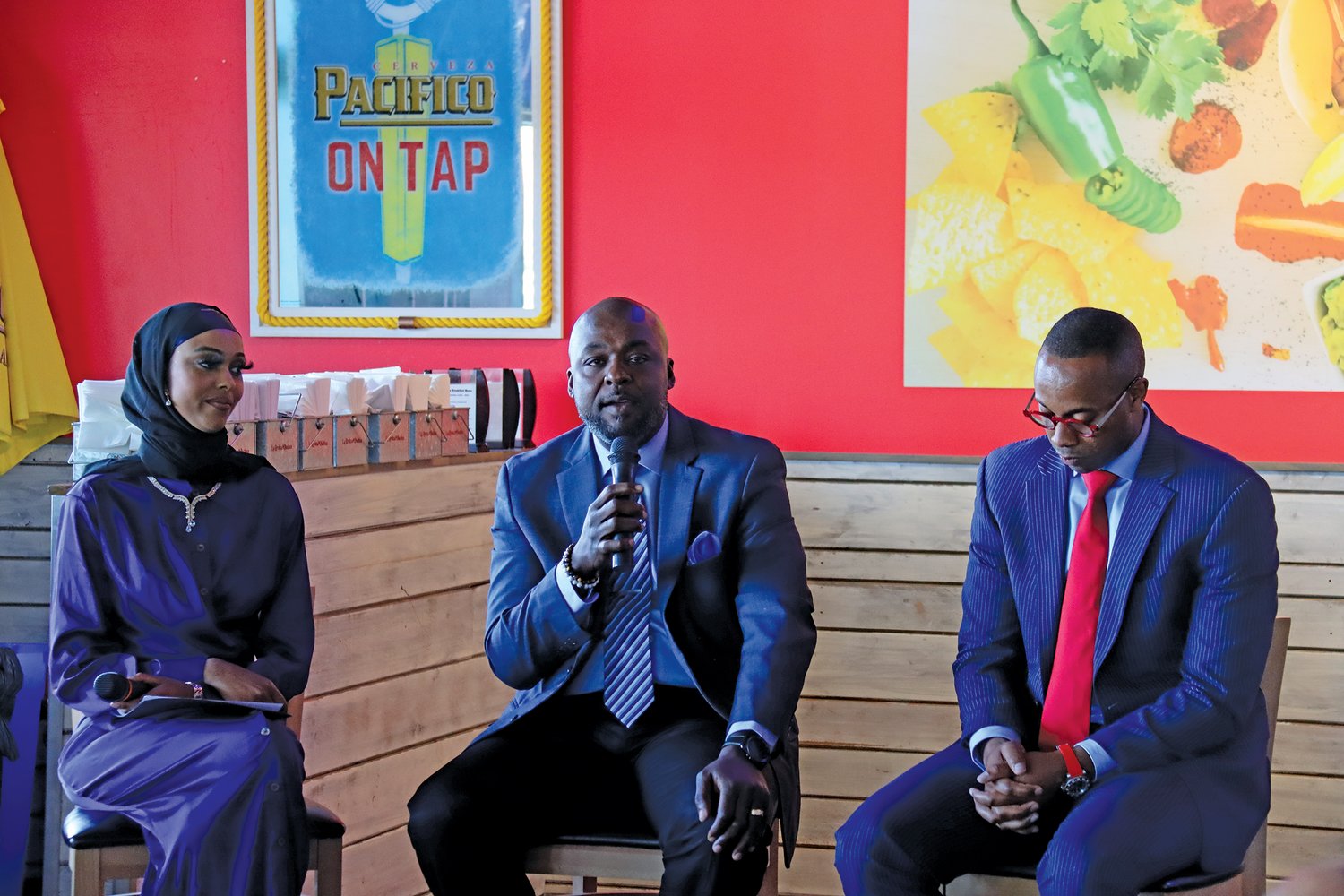 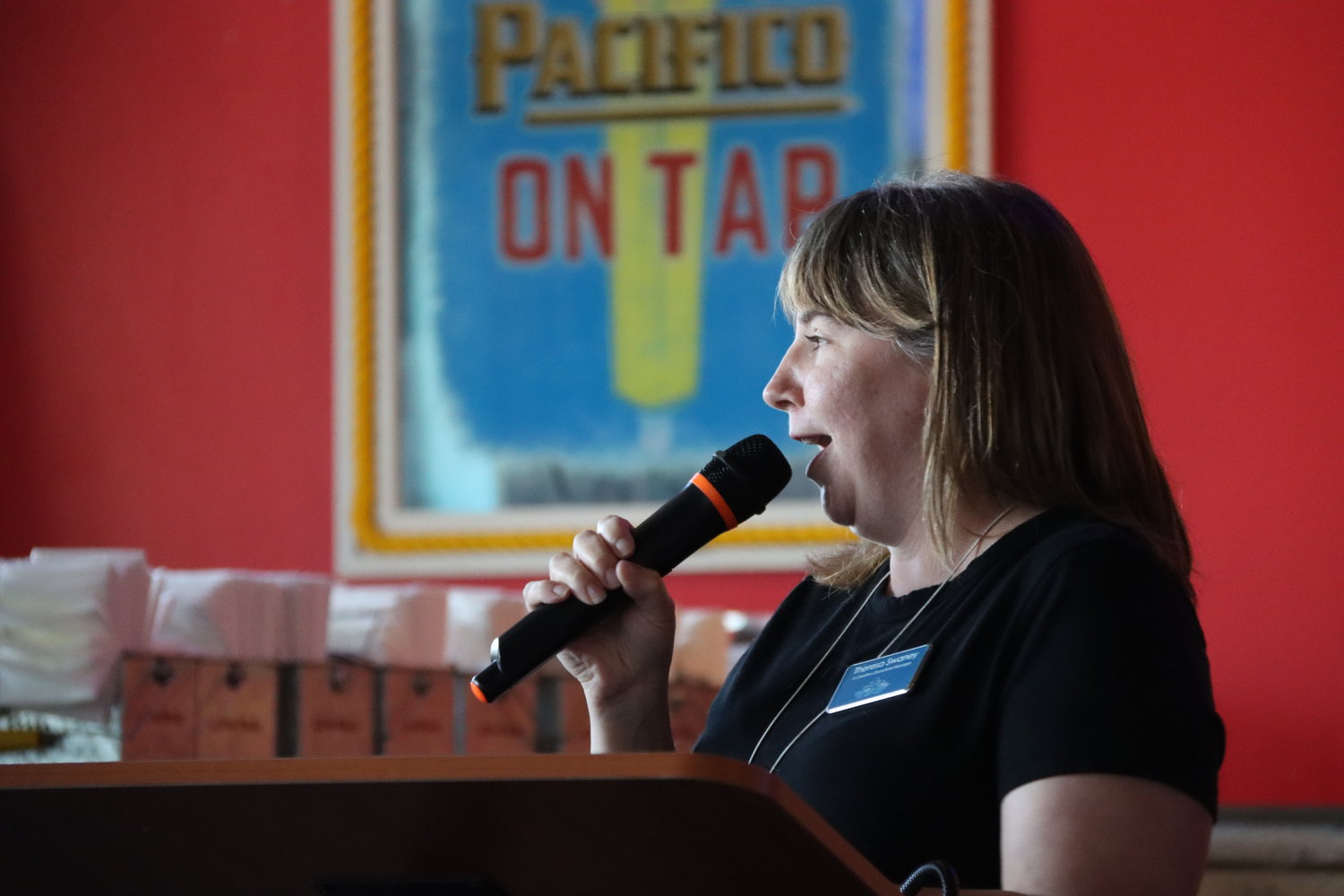 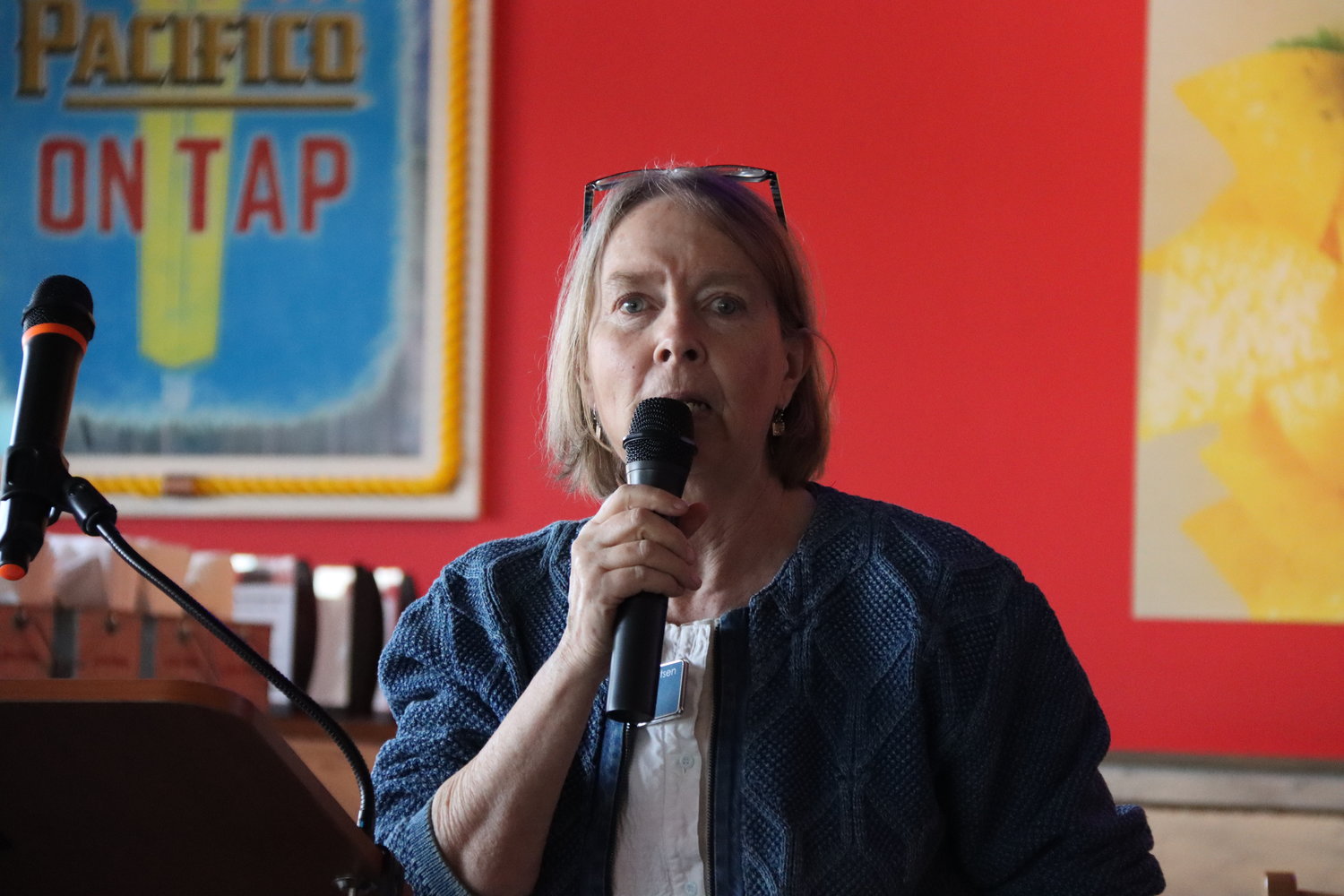 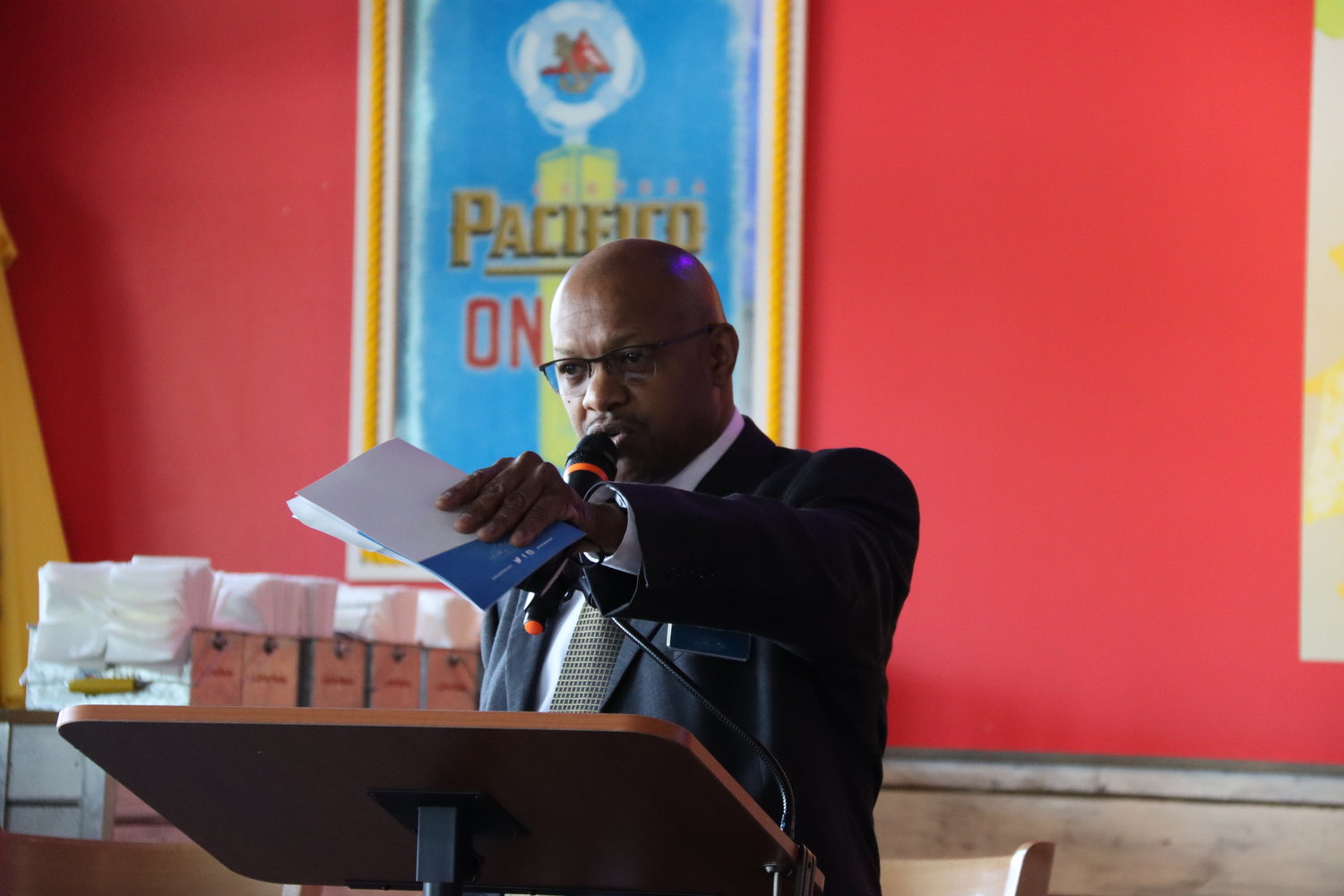 “We are seeing a difference,” said Earlsworth ‘Baba’ Letang of the Neighborhood Development Center, who is the Lake Street Council Board Vice President.
Tesha M. Christensen 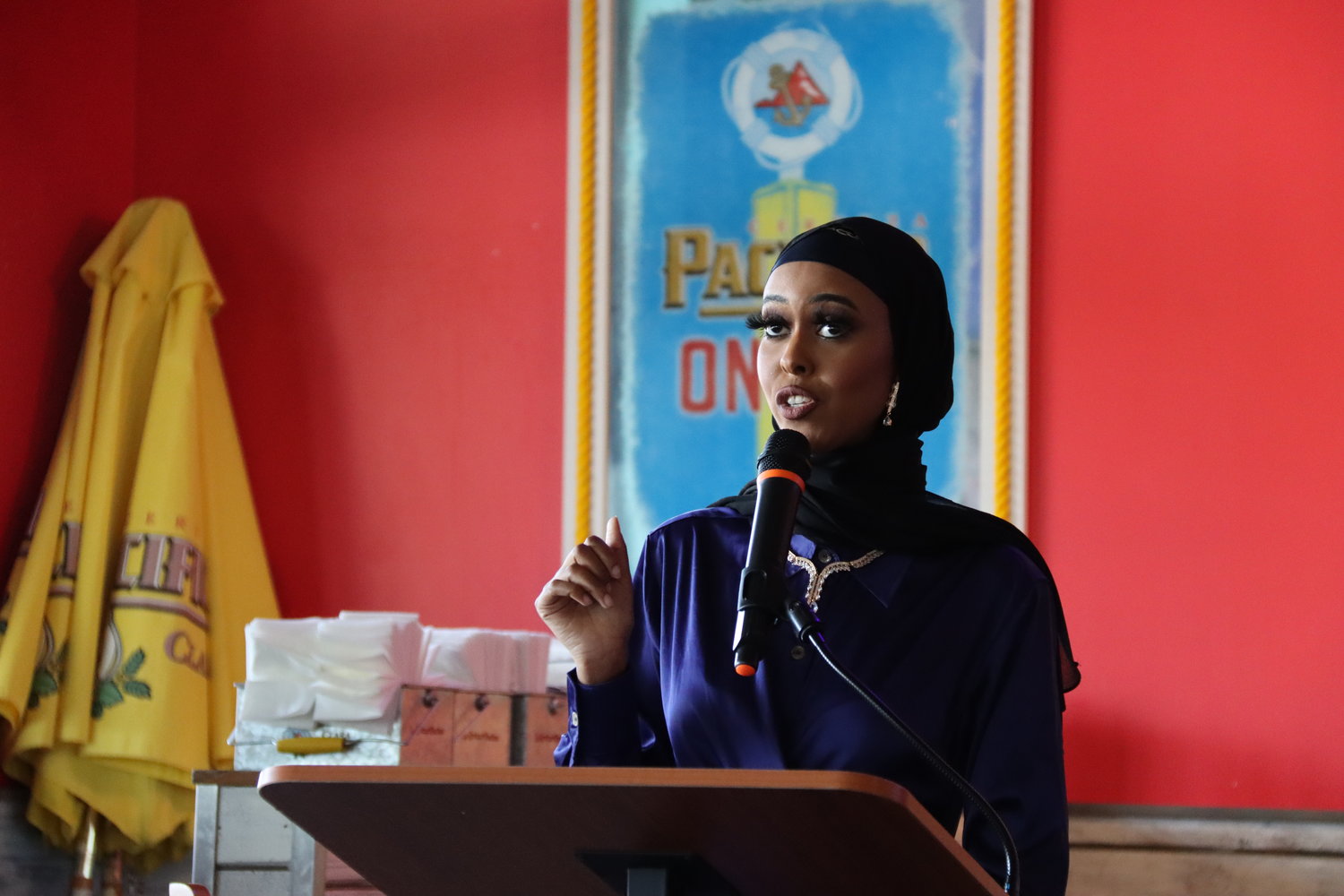 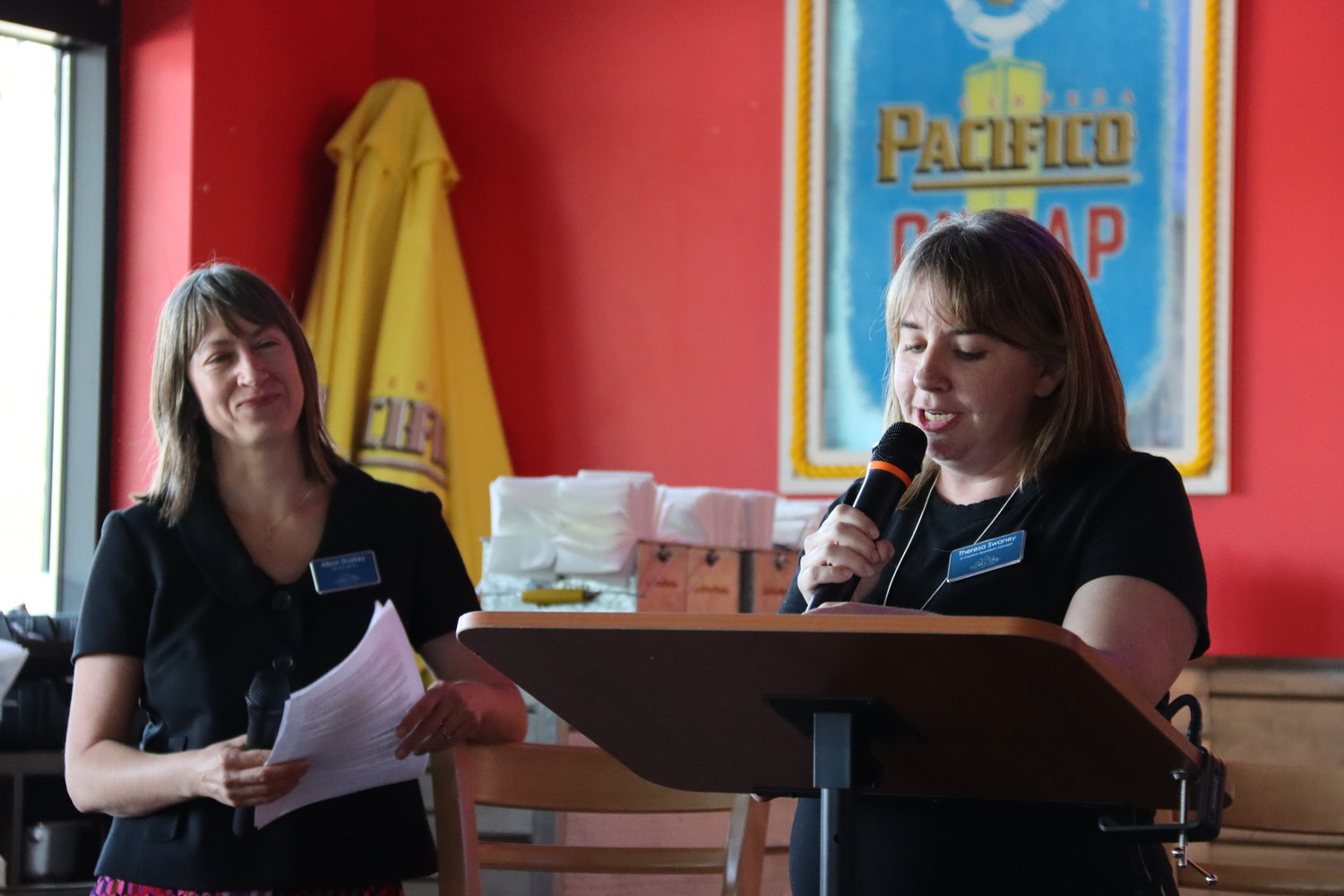 “We believe in you. We know that Lake Street will rebound. We know that you all have the strength and resilience – due to everything you’ve been through over the last couple of years – to come back. You’re here right now. You have stayed on Lake Street. You have stayed in this city because you want to make it a better place and you believe in our collective strength,” said Mayor Frey. “We are going to be an example that others can follow.” 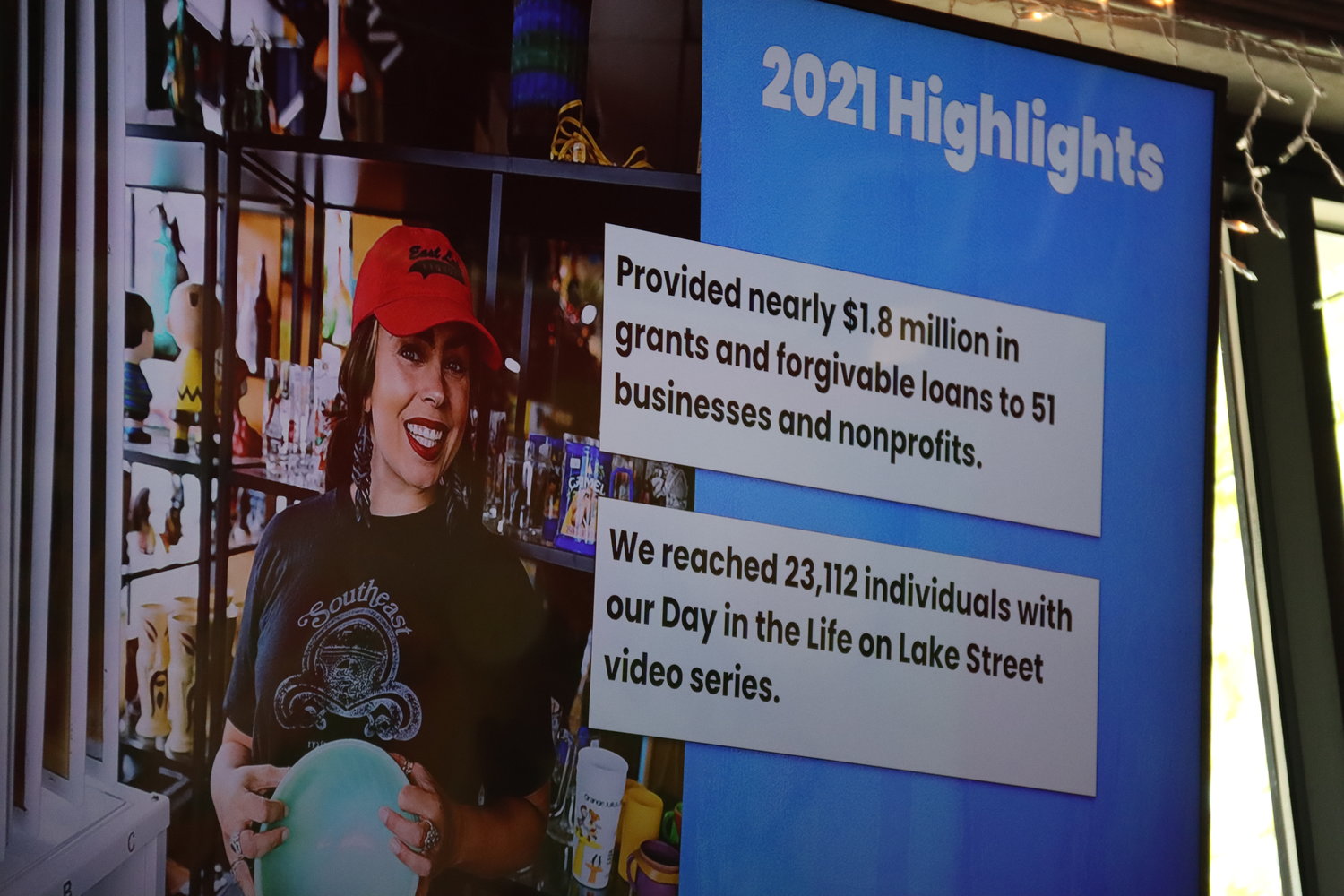 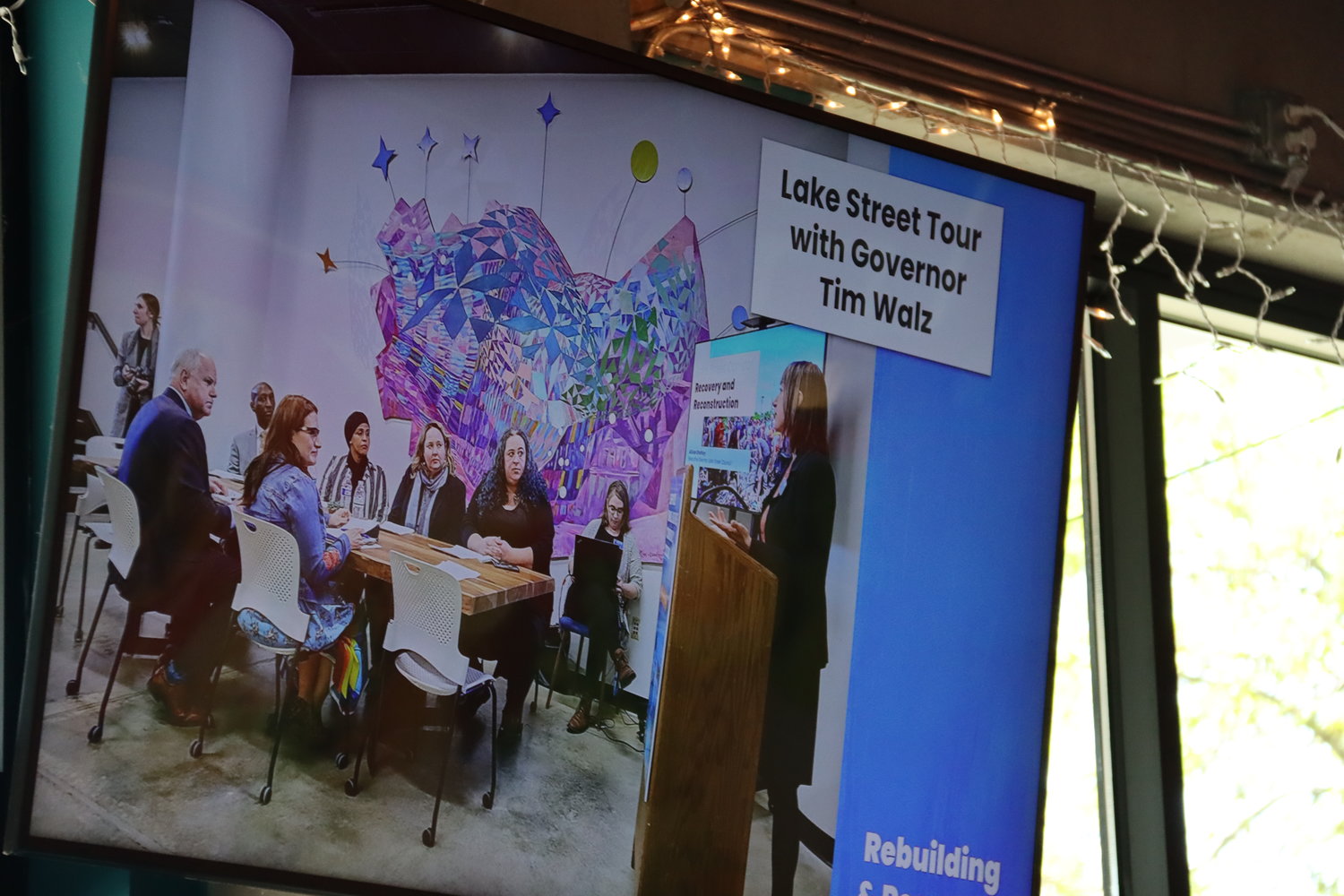 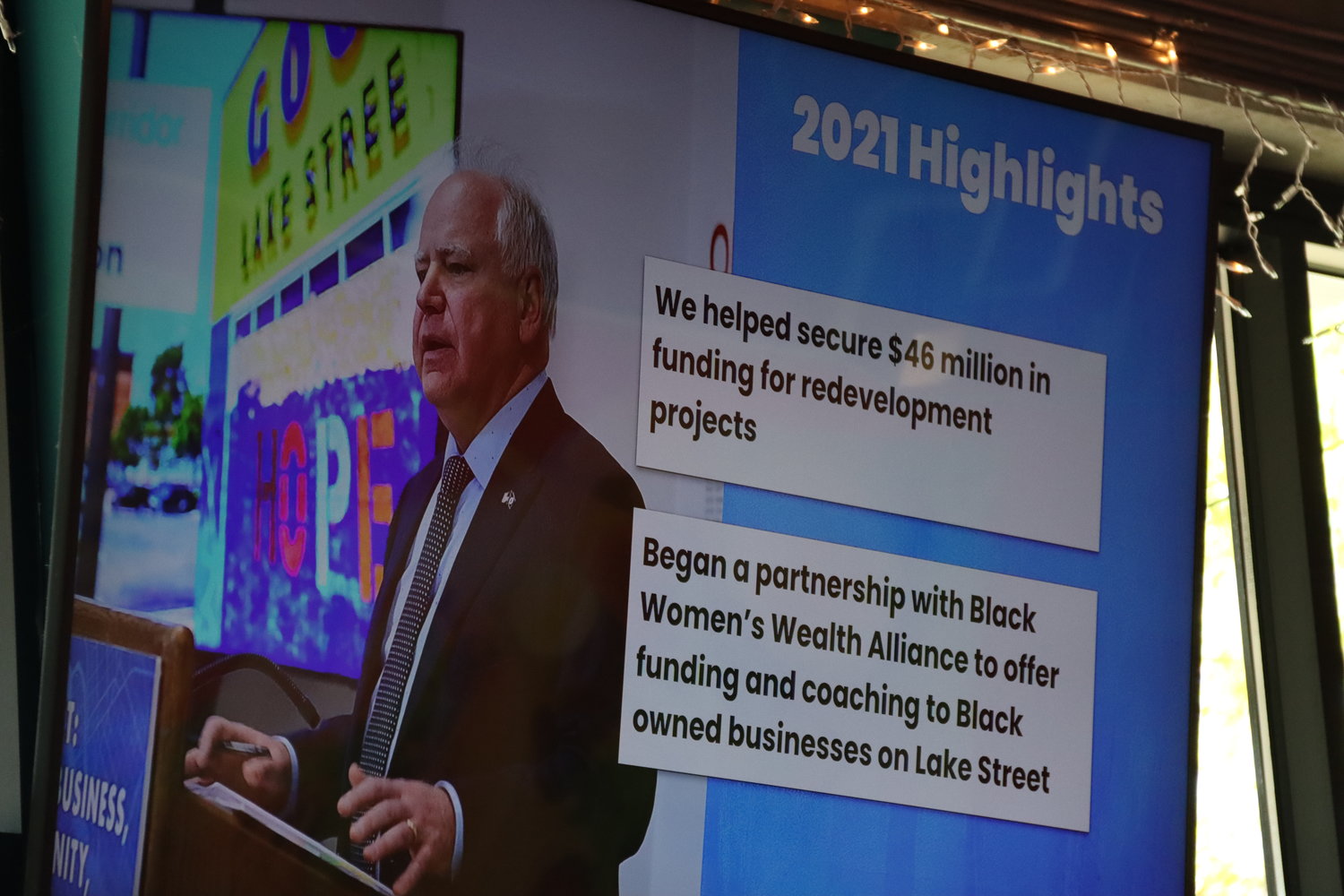 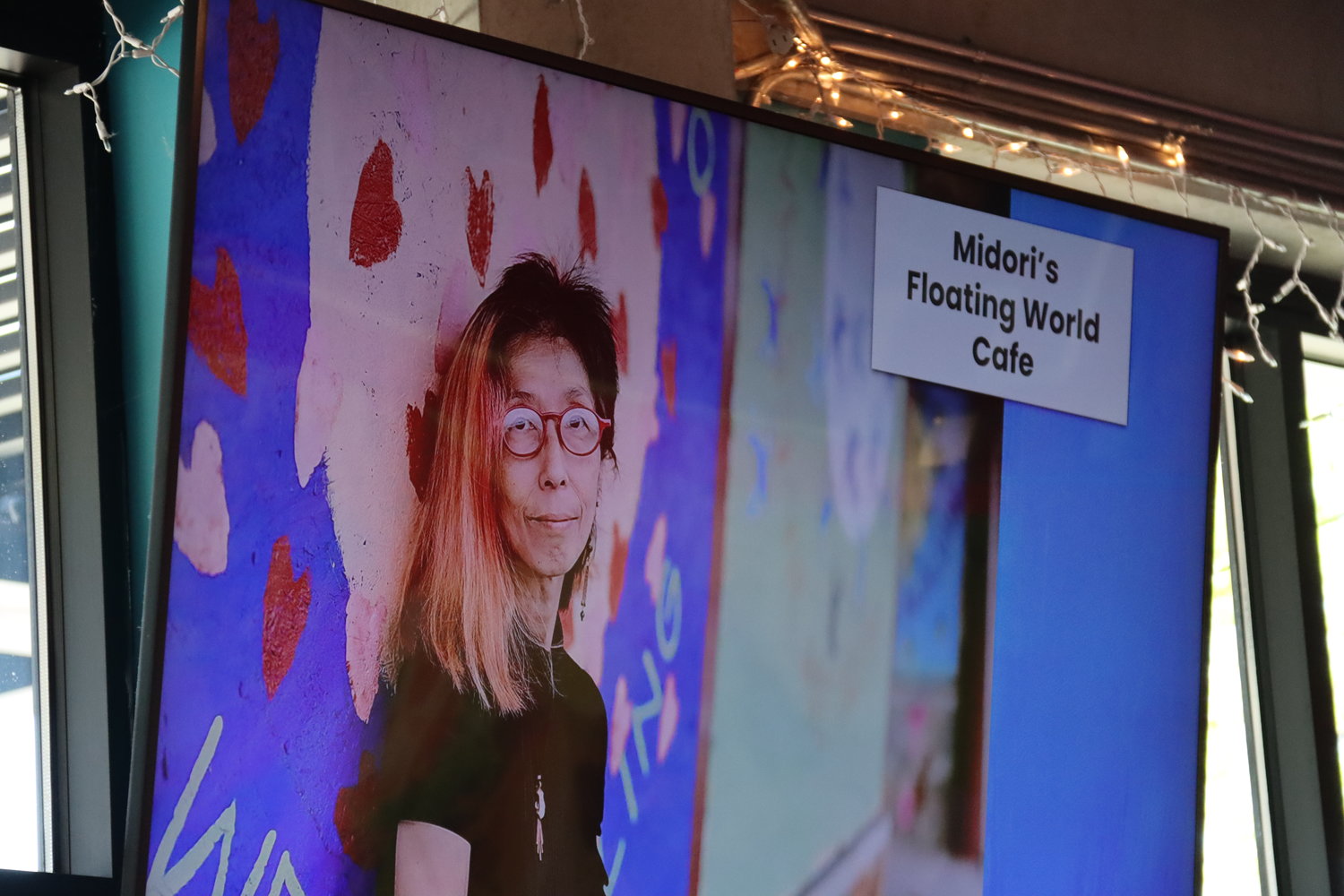 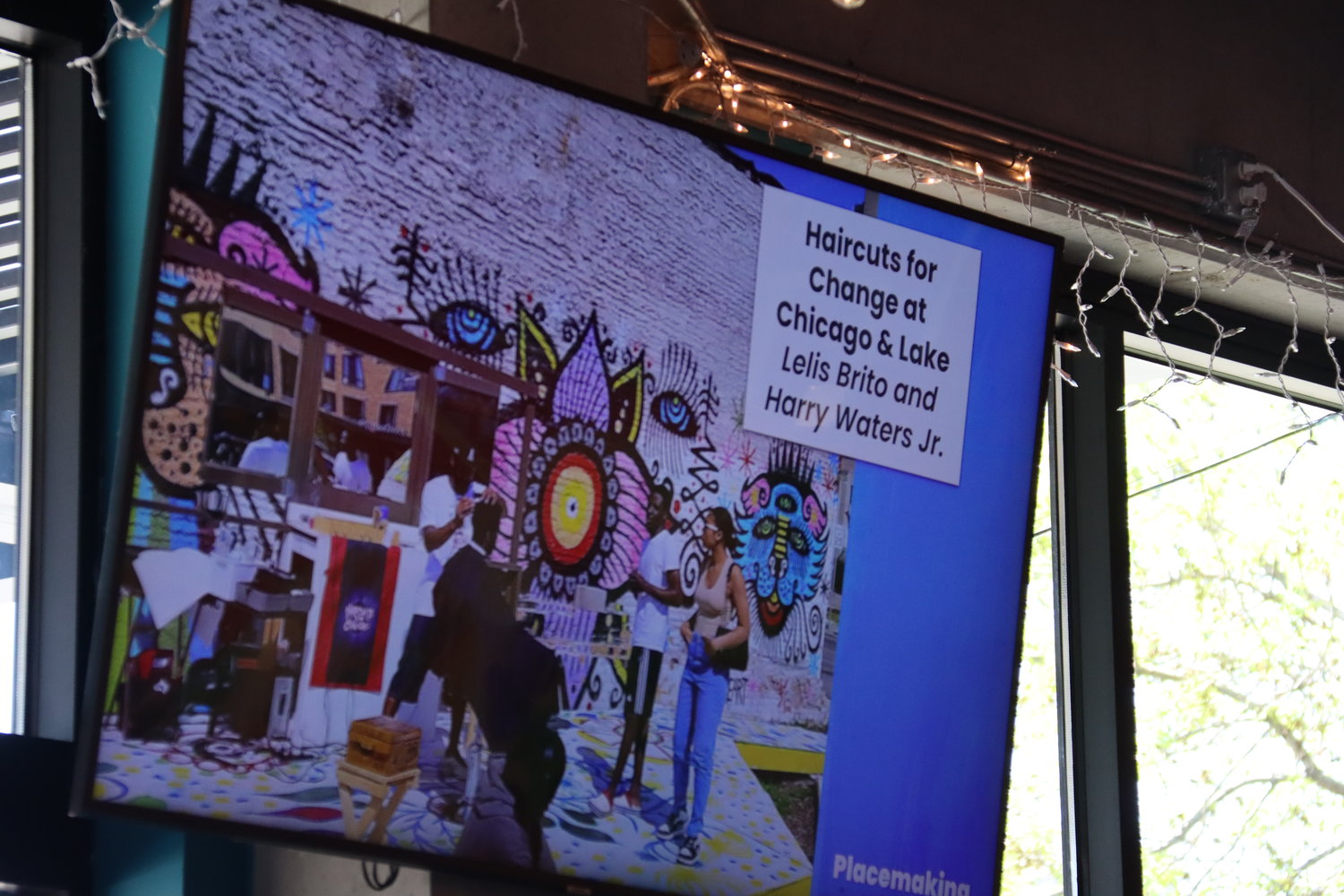 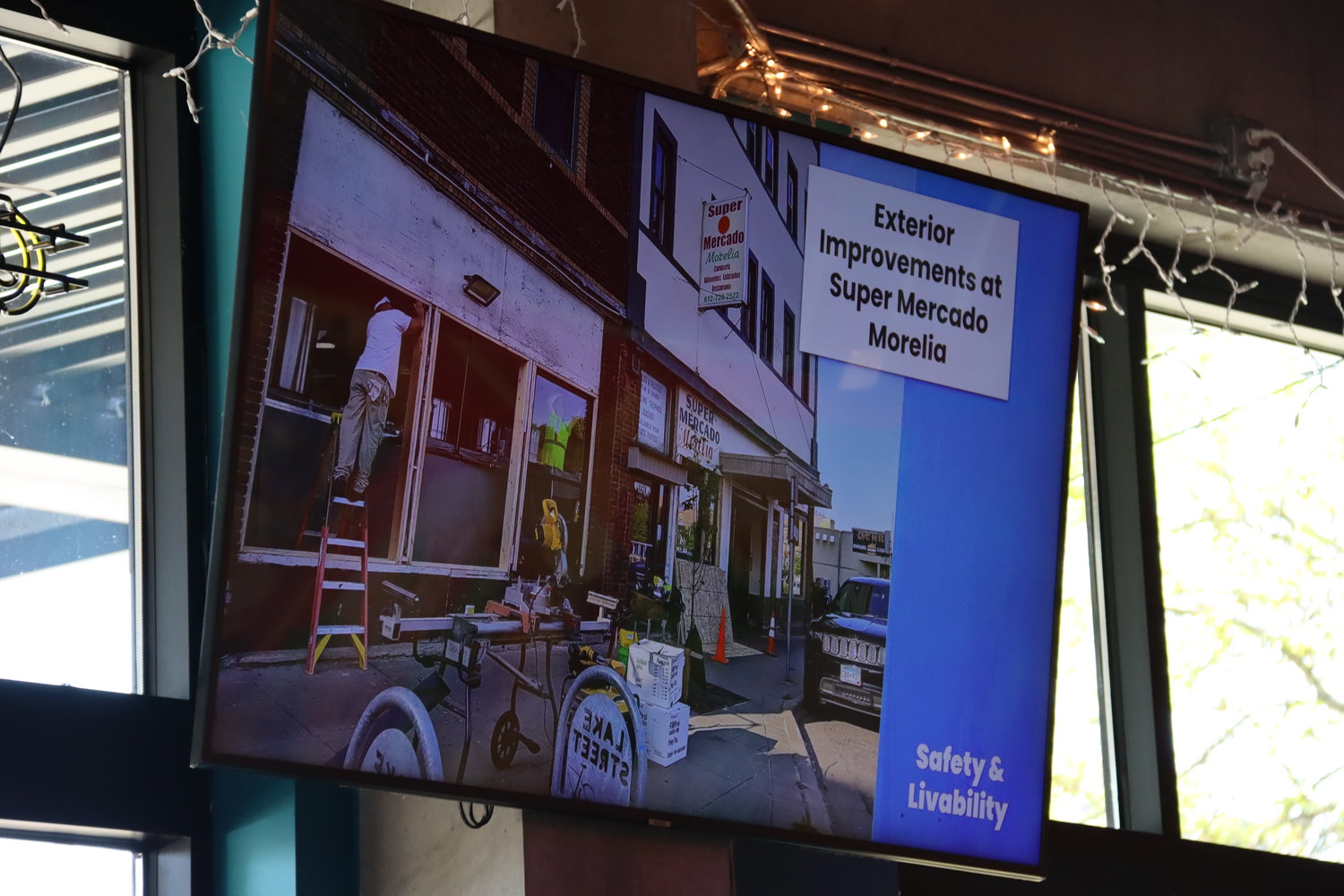 The GreenLight Fund Twin Cities (GLFTC) has committed to a $1.4 million multi-year investment in Let Everyone Advance with Dignity (LEAD). Alongside a coalition of funders and a commitment from Minneapolis leaders, LEAD will use a community-involved approach to reduce police interactions for low-level offenses in the Lake Street corridor.

LEAD, a project of Law Enforcement Assisted Diversion, is a public health approach to community safety that diverts individuals cycling in and out of the legal system into a long-term case management model of care. Utilizing a harm reduction platform to improve outcomes, LEAD’s unique, collaborative implementation structure brings a cross section of community leaders and neighborhood residents and business owners together in partnership with case managers. Their common goal is to decrease recidivism and improve stability for residents facing challenges with non-violent behaviors often criminalized. They are working with over 70 cities nationwide.

GreenLight Twin Cities brought together a coalition of partners and funders, who will support the implementation of LEAD. Serving up to 50 participants in its first year and scaling to additional neighborhoods across the Twin Cities, goals include reaching 200+ participants, lowering recidivism by 50%, increasing social supports by 35% and improving relationships with residents, law enforcement, and business owners over the next four years.

Despite initial fears that outside investors would scoop up properties along E. Lake Street after the 2020 Uprising, not a single one has been sold to outside interests, reported Lake Street Council Executive Director Alison Sharkey.
During the LSC annual meeting on May 18, 2022, Sharkey said one of the things she is most proud of is helping over 20 entrepreneurs begin the process of rebuilding from the ground up with an investment of $1.4 million through grants and forgivable loans. This includes Midori’s Floating World Cafe, Uncle Hugo’s and Uncle Edgar’s bookstores, El Rey Car Audio, MIGIZI and Gandhi Mahal.
“In 2020, when the pandemic hit and especially after George Floyd was murdered in front of all of our eyes launching a nationwide call to action, everyone in this room was affected,” said Sharkey. “Each of us was called to not only help rebuild our community, but also to help address the deep-seeded inequities that got us here.”
LSC supports small businesses with capital and advising. It promotes Lake Street by telling its stories and shaping its reputation. LSC is “an advocate to make sure our community has a seat at the table and we push for policy and investment that supports our neighborhood,” said Sharkey.
The Lake Street Council has provided $1.8 million in grants and forgivable loans to 51 businesses and nonprofits on Lake Street corridor.
“This funding isn’t nearly enough to help all Lake Street businesses really thrive, but we’re proud to be able to contribute to the recovery process in this way,“ said LSC Senior Creative Operations Manager Theresa Swaney.
It will cost an estimated $250 million to restore Lake Street. The majority of that, $225 million, is needed for acquisition, pre-development and gap funding.
LSC helped secure $46 million from the city of Minneapolis and the state to aid businesses damaged along the Lake Street Corridor and other places in the city.
“The success of Lake Street depends on addressing our city’s racial disparities,” said Swaney. LSC is partnering with Black Women’s Wealth Alliance to offer coaching to Black-owned businesses on Lake St., and has launched Be Well Lake Street to give businesses free and confidential counseling.
The Lake Street Reimagined Placemaking grants supported 26 artists and organizations to create public art and host events along the corridor, including recent window-cling murals in the vacant restaurant space at W. Lake and Hennepin.
“We are seeing a difference,” said Earlsworth ‘Baba’ Letang of the Neighborhood Development Center, who is the Lake Street Council Board Vice President.
The organization itself has grown and changed. Its four staff members (Sharkey, Swaney, ZoeAna Martinez and Matt Kazinka) have been joined by six more:  Ruth Howell, Oscar Corral, Yusra Mohamud, Marie Campos, Russ Adams and Alex Tsatsoulis. LSC lost its location in the Uprising, and moved to the Midtown Exchange building at 2925 Chicago Ave. #190.
What’s next for the LSC? A survey of businesses and nonprofits along the corridor identified these top five needs: 1) Crime prevention, safety and livability, 2) Attracting customers to the corridor, 3) Hiring qualified employees, 4) Racial equity, and 5) Developing a shared vision for the future.

REWRITING THE NARRATIVE
Facilitated by Yusra Mohamud of the Lake Street Council, two people shared with luncheon attendees what they’re doing in the community.
Panelist David Jenkins of First Independence Bank grew up in Phillips. He announced that the state’s first Black-owned bank will be opening its second location at E. Lake St. and Hiawatha Ave. in July inside the Hennepin County services building. (Read article on expansion online at www.swConnector.com) “How do we together make a difference?” Jenkins asked. “This is a time to really rewrite the narrative.”
PJ Hill grew up near Little Earth at 26th and Cedar, and played professional basketball. He’s a financial adviser, Minneapolis NAACP Minneapolis Vice President, and a local real estate developer.
He wants real estate to reflect the community. “How do I liberate the community economically?” he asks himself. Hill is working to “change the narrative and create generational wealth.”

‘WE BELIEVE IN YOU’
“We’ve got to use these crises as a chance to do things better and differently, not getting back just to the old normal but blowing by the old normal and pushing a true transformation on Lake Street,” said Mayor Frey during the meeting.
The Lake Street Council raised over $12 billion from over 70,000 donors to help fund recovery.
The city stepped up too, said Mayor Frey, designating $4.5 million to help over 40 businesses remove rubble. The city put $7.65 million into a commercial development fund that enables entrepreneurs that have owned their own business to own not just the business but the underlying property. “The goal here, of course, is when things come back the values rise, and the people and business owners don’t get the boot but rather realize the gain in the value themselves,” said Mayor Frey. “This is something we need so desperately. The $7.65 million is just the beginning.”
Mayor Frey pointed out that he has also heard from people that a big piece of recovery is safety. “Safety and recovery, they have to work hand in hand,” said Mayor Frey.
The new LEAD (Let Everyone Advance With Dignity) program will launch in the coming months. This will put social workers on Lake St. to work with those who have experienced some form of trauma, such as addiction and homelessness, in an effort to reduce police interactions for low-level offenses. (See sidebar for more information.)
As the city has experienced attrition in the police department, it is working to recruit a new chief and officers. This is happening at a time of a nationwide shortage. Minneapolis has signed two joint powers agreements. The state of Minnesota will provide patrol officers to work two shifts on East Lake and West Broadway for four hours on Thursdays, Fridays and Saturdays. The other agreement is with Bureau of Criminal Apprehension for 13 additional investigators, who will be embedded with city officers to crack down on serious crime. “You will see more of a presence,” said Mayor Frey.
He pointed out that the city has set aside $1 million for cameras and lighting.
Office of Violence Prevention efforts are ongoing and will be working with local organizations and businesses.
“This has to be a partnership where we’re locking arms and attacking some of the most difficult issues hand in hand,” said Mayor Frey.
“We believe in you. We know that Lake Street will rebound. We know that you all have the strength and resilience – due to everything you’ve been through over the last couple of years – to come back. You’re here right now. You have stayed on Lake Street. You have stayed in this city because you want to make it a better place and you believe in our collective strength.”
He added, “We are going to be an example that others can follow.”