News for everyone, delivered to everyone
LOCAL GROUPS

Neighbors band together for equitable change 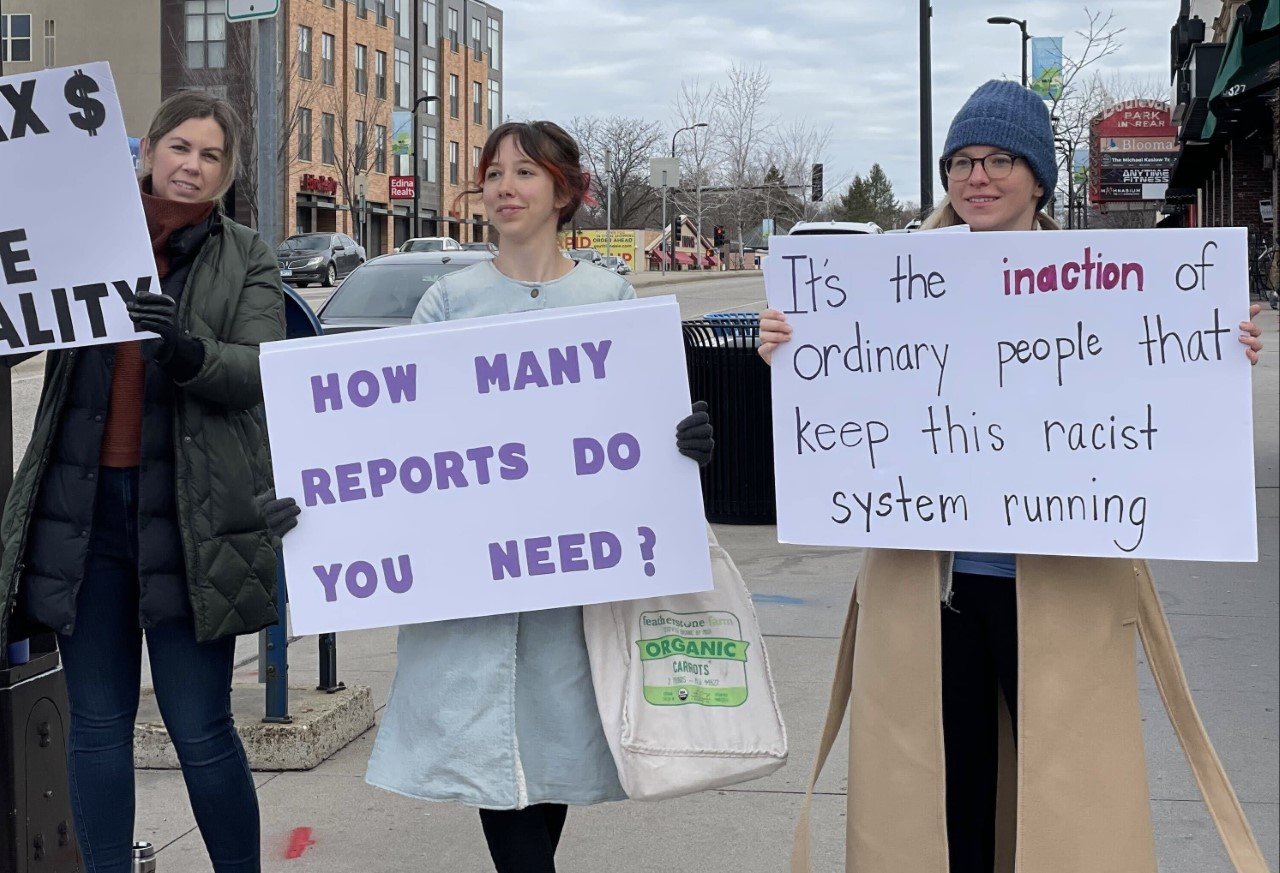 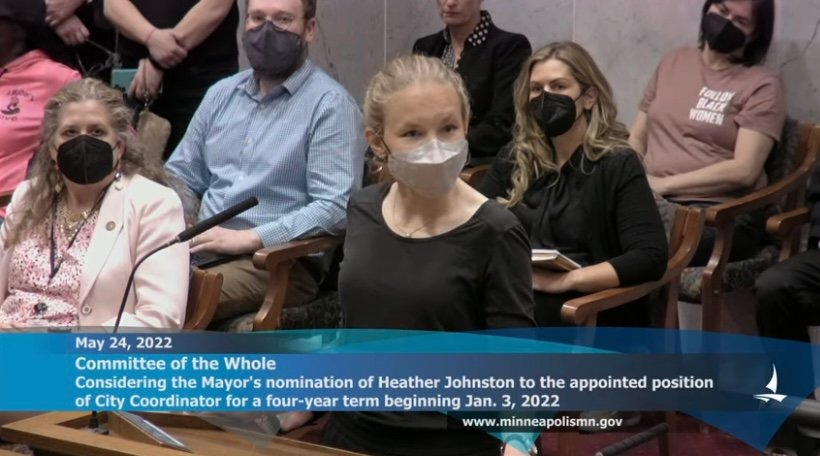 SWAE member Elliana Lippold-Johnson speaks at the community hearing for the consideration of Heather Johnston as city coordinator. (Photo submitted) 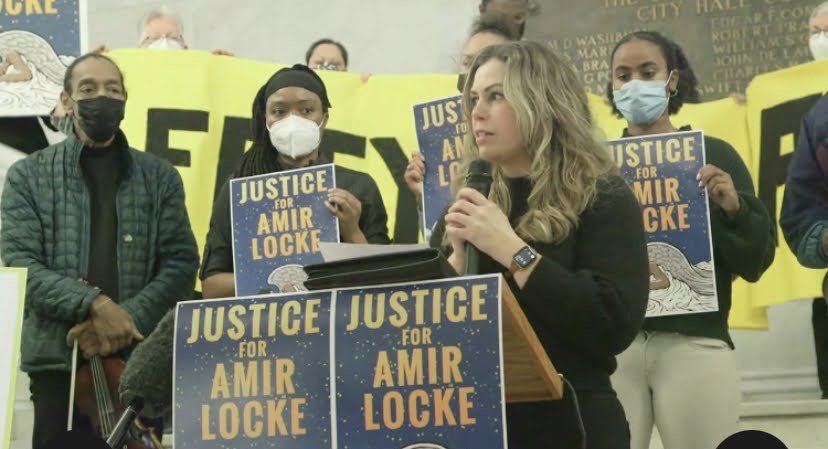 SWAE members organized alongside the group leading The Residents’ Complaint. This grassroots coalition, with consent from Amir Locke’s family, requested an ethics investigation into Mayor Frey for his failure to exercise proper judgement regarding no-knock warrant policies in Minneapolis, which led to Amir’s murder by the MPD. Above: Kristen Ingle (at podium) and Raycurt Johnson (with violin). (Photo submitted)
Previous Next
Posted Thursday, July 28, 2022 12:03 am
By Chloe Peter

The Southwest Alliance for Equity (SWAE) is a Southwest Minneapolis neighborhood alliance dedicated to addressing and changing racist policies. They are asking questions like: What kind of community do we want to be a part of – and what kind of community do we want to build? And how do we especially show up for those who are systematically excluded and marginalized?
SWAE works together collaboratively toward change. Members that contributed to responses to this piece are: Cecelia Caspram, Jessica DeWeerth, Sheila Dingels, Ryan Greenwood, Chris Henjum, Kristen Ingle, Ray Klahr, Bali Kumar, Elianna Lippold-Johnson, Eric Magnuson, Maggie Rittenhouse, Todd Schuman, Heather Silsbee, and Bianca Zick.
More information about Southwest Alliance for Equity (SWAE) can be found at swaempls.org, and you can find them on Twitter, Instagram and Facebook.

How was SWAE started and for what purpose?
SWAE: The murder of George Floyd by Minneapolis police officer Derek Chauvin on May 25, 2020, shook us to our core and sparked a global uprising for racial justice. Living here at that time drove us to look for ways to engage in the movement for change. By the summer of 2021, many of us neighbors in Southwest Minneapolis were moved to start SWAE.
Our group has focused on two things: 1) we have been holding gatherings to build community and talk with our neighbors about local political issues, and 2) we’ve taken actions together, to hold our elected leaders and our city enterprise accountable.

Can you talk about why an organization like this is needed in SW Minneapolis?
SWAE: We know that power lies within our collective body of neighbors and citizens – not with elected officials. We think SWAE is needed because we have often isolated ourselves, not engaging much with the rest of the city, and we have often prioritized our own needs over the needs of the rest of the city.
As is typical in groups of White folks, many of us in Southwest may not have much practice reflecting on our racial identity. A big part of SWAE is creating a welcoming place where we can be open with and supportive of each other, as we learn to do better together.
Because of its White and wealthy roots, Southwest Minneapolis tends to cling to a core element of White culture: individualism. We want to cultivate belonging, love, compassion, and understanding between neighbors.

How do you help address non-equitable situations?
SWAE: We’ve mobilized our members to participate in protests, sign petitions, write letters to elected representatives, and so much more.
Most recently, SWAE was called to support BIPOC city staff in opposing the mayoral appointment of Heather Johnston as the permanent city coordinator, a controversial appointment due to her past performance in the job as interim coordinator. SWAE members wrote letters to elected officials, published opinion pieces, testified at City Hall, and hosted city staffers at a backyard event for neighbors to hear more troubling details regarding this issue. Ms. Johnston was ultimately confirmed and, unfortunately, there are already some signs of retaliation against staff who spoke up in opposition to her appointment.

Why does it matter that people vote?
SWAE: Local elections shape our daily experiences in this city. Southwest Minneapolis is predominantly White, relatively wealthy, and overwhelmingly consists of homeowners, despite being a part of a majority renter city.
Historically, we in Southwest Minneapolis have voted to keep it that way. Southwest Minneapolis Ward 13, for example, had the most votes affirming the “Strong Mayor” amendment and rejecting the rent stabilization and public safety amendments – all of which run counter to creating greater equity in the city. For the safety and prosperity of our entire city, Southwest Minneapolis can no longer be a fortress of wealth and power that only seeks to sustain its own interests.
Our democracy will only work if we citizens are engaged. Being informed is our first step. Then, we have so many opportunities to pay attention and hold our elected officials accountable.

White supremacy stems far and wide. how do you address all of these problems?
SWAE: Whether it’s redlined neighborhoods, racist exclusions in home deeds, inequitable school funding, or unjust public safety, we’re all harmed by the legacy of White supremacy.
Ultimately, we are so motivated to do this work because we believe that it will bring us closer to our vision of a thriving city – one that is equitable, integrated, healthy, and safe for all, where everyone belongs, and opportunity and resources are shared.

How can others help? How can White people help dismantle the system that was largely created to benefit them?
SWAE: We believe systems rooted in racism and White supremacy cause harm to us all. Even if a system or policy was created to benefit White people, the inequity it causes ends up costing all of us.
To dismantle the systems that were designed to create and maintain inequality, it’s essential to confront the fact that this country was founded on racial exploitation. There are community education classes, books and online articles, podcasts, movies, virtual and in-person workshops. Do your own self-reflection and self-work to better understand whiteness. Much of this work can be done on a very local level. Think about joining SWAE and building community with us.