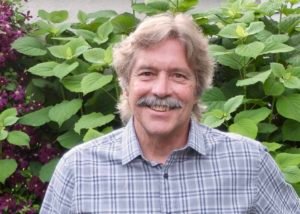 Catch former Nokomis mail carrier Vincent Wyckoff talking about his new book during a virtual interview on Saturday, Sept. 19, noon to 1 p.m. It is hosted by Once Upon a Crime. Signed copies of "Nightwatchers" are available at Nokomis Shoe Shop and Nokomis Beach Gallery and Frame Shop.

Get ready to see Minnesota’s North Shore in a new light – or rather, in the dark – in Vincent Wyckoff’s new novel, “Nightwatchers,” to be released on Sept. 8.

The sequel to his first novel "Black Otter Bay," "Nightwatchers"returns to the same fictional small town on the big lake with the same cast of characters – Sheriff Marlon Fastwater, Postmistress Mrs. Virginia Bean, Café Proprietor Marcy Soderstrom, and more. Lake Superior, in all its mist and majesty, forms the backdrop.

The story opens with the shadowy intrigue of something, someone, slinking through the forest in the early light of dawn. The mystery unfolds as residents seek to find what, or who, is out there and intensifies as a legend is revealed.

In keeping with its prequel, “Nightwatchers” is crafted as a non-violent mystery. Asked why, Wyckoff explained:

“It seems every mystery thriller now pushes the boundaries on violence; especially against women. My thought is, Why not a thrilling story with engaging characters without all the violent, vulgar blood and gore.” The heroine in "Black Otter Bay," for example, is a 13-year-old girl, who returns in “Nightwatchers” and again in the third installment of the series, which Wyckoff is currently writing. 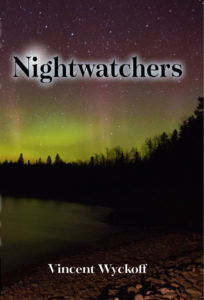 Readers can expect more of a “thriller” in this installment. The term “Nightwatchers” comes from Wyckoff’s mother.

“When I was a child and playing outside with my friends, she’d call for me to come in after dark, and of course I didn’t want to,” explains Wyckoff. “Finally, she’d say the Nightwatchers will be out soon. I didn’t actually believe her, but when you’re a little kid your imagination takes over. I’d conjure up all sorts of monsters lurking around and eventually head inside.” A poem written by his mother is included on the dedication page.

Wyckoff is familiar to many Nokomis area residents as their former mail carrier and author of “Beware of Cat,” which chronicles his experiences delivering the mail. Black Otter Bay, his first work of fiction, was published shortly after Wyckoff retired from the postal service. The novel was nominated for a Minnesota Book Award and won runner up for the Midwest Independent Booksellers Award. His short story, “Lemonade on a Parkside Bench,” which takes place at Lake Hiawatha, is included in an anthology entitled, “Home.”

Signed copies of "Nightwatchers" will be available at Nokomis Shoe Shop and Nokomis Beach Gallery and Frame Shop on Sept. 8. Once Upon A Crime is hosting a virtual interview with Wyckoff on Saturday, Sept. 19, noon-1 p.m., and will have signed copies at the store. Books are also available for preorder on the Moon Palace Books, Magers & Quinn Booksellers, Barnes & Noble and Amazon websites.

Follow the release schedule on Wyckoff’s Facebook page. He also welcomes you to contact him at vincentwyckoff@gmail.com for socially-distanced book clubs, virtual book clubs, and personalized signings for gifts.