Three-day Minnesota Nurses Association strike has ended, but no agreements have been reached for 15,000 nurses 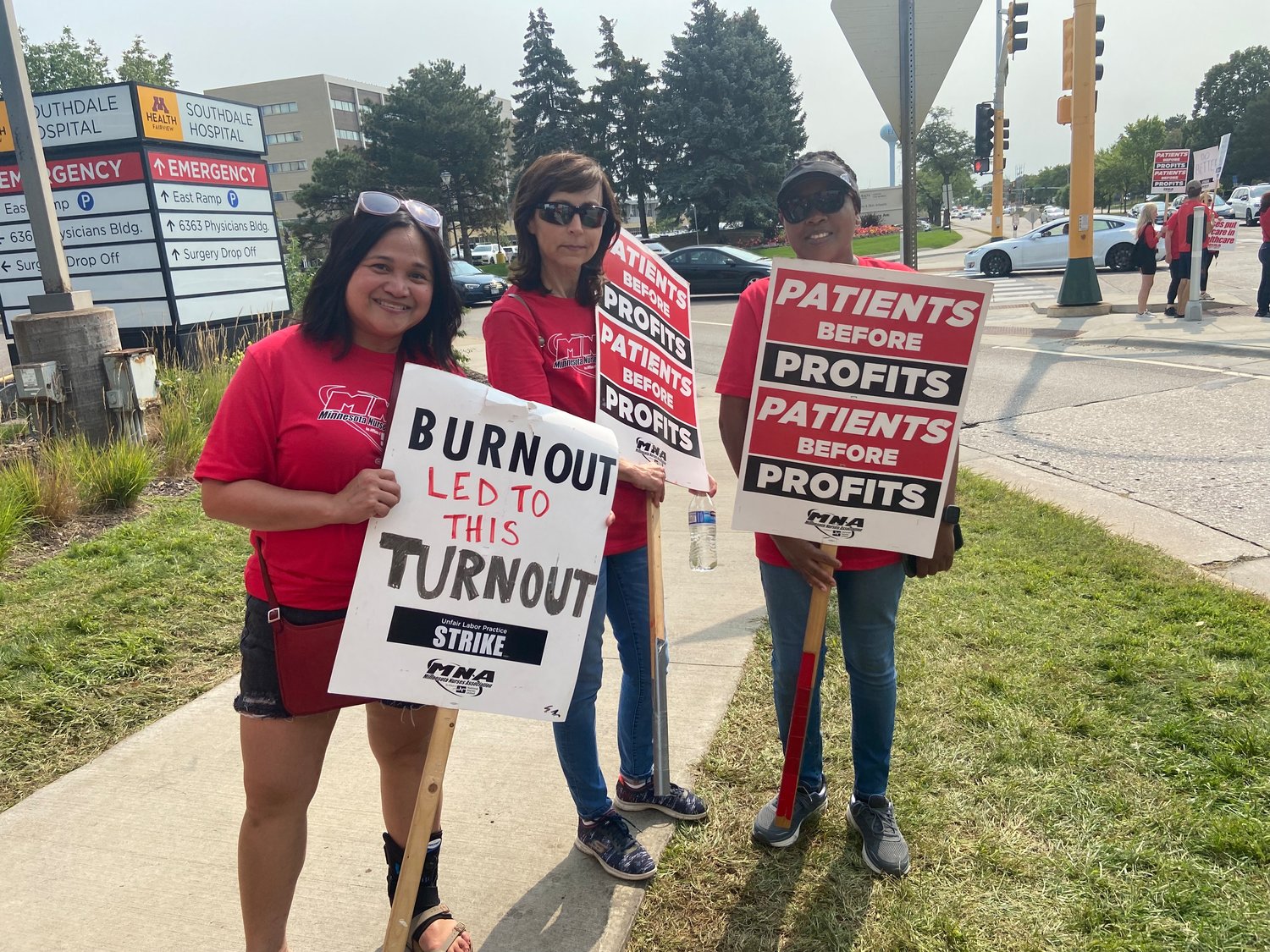 From left to right: Donna Soriano, Nellie Arsemyeva, and Diphina Sang gathered to strike in front of M Health Fairview Hospital Southdale, 6401 France Ave S, Edina on Sept. 14th, 2022. "We do not have appropriate staffing," Arsemyeva said. "We are expected to work doubles and may have 6 to 8 patients to care for at one time."
Chloe Peter 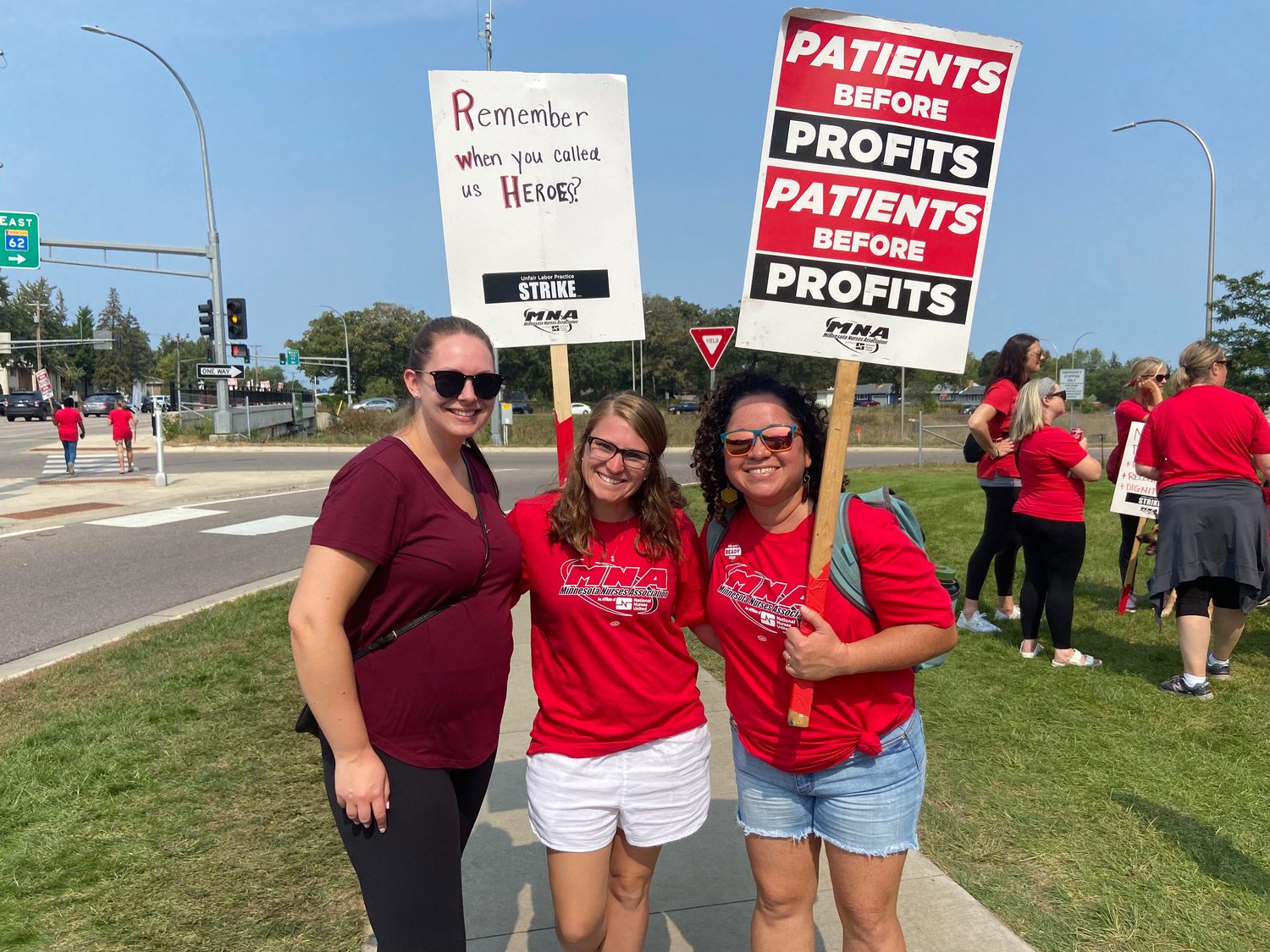 Outside of Children’s Minnesota Hospital – Minneapolis (2525 Chicago Ave.) and M Health Fairview Southdale Hospital (6401 France Ave. S.), nurses in bright red T-shirts held signs with sayings such as, “Remember when you called us heroes?” “Burnout led to this turnout,” and “Fairview broke its nurses, not its budget.” Cars driving by honked in support as nurses cheered back, and the picket line was filled with talk of what was going to happen in the upcoming days after the three-day strike.

On Sept. 1, 2022, nurses with the Minnesota Nurses Association (MNA) announced that 15,000 nurses throughout the state planned to strike for three days beginning Sept. 12. The nurses have negotiated with the hospital executives for more than five months and is the largest private-sector nurses’ strike in U.S. history, according to the union.

The MNA press release from Sept. 15, 2022, stated, “Nurses have been bargaining for six months over new contracts, seeking changes to address the crisis of understaffing and retention in our hospitals. There is no shortage of nurses in Minnesota, but deteriorating care and working conditions are driving more nurses to leave the bedside. Recent studies show that more than half of all nurses are considering leaving the profession while adverse events for patients are increasing.”

The strike affected 16 hospitals in the Minneapolis-St. Paul and Duluth area. The nurses union has been asking for a solution to short staffing and retention issues, and a wage increase of 27 to 30 percent over the next three years. While wages have been included in the negotiations, the primary concern of nurses on the picket line was staffing and patient care.

“We do not have appropriate staffing,” said Nellie Arsemyeva, a nurse striking outside of Fairview. “We are expected to work double shifts, and may have six to eight patients to care for at one time.”

Not all MNA nurses participated in the strike, and the positions left over during the strike were covered by qualified temporary nurses. Allina Health released a statement reassuring patients that care would go on as normal. No agreements had been reached between executives and the MNA as of press time. However, Allina Health also announced that they are “looking forward to returning to the bargaining table,” and are scheduling a bargaining session this week with the MNA on a contract agreement.

Another nurse on the picket line at M Health Fairview Southdale Hospital, Donna Soriano, said, “[People make] it sound like the strike is all about money but it’s about patient safety, about not being able to give our patients the care they deserve.”

Trisha Ryshkus, a registered nurse at Children’s Minneapolis, said, “In order to protect our patients, we need safe staffing.”

Tracey Dittrich, a nurse who has spent 24 years in the emergency room at Children’s Minneapolis, was voted to be on the negotiating team representing the MNA nurses at Children’s Minneapolis. This job includes attending bargaining meetings with executives at Allina Health, and advocating for better conditions for nurses at the hospital while negotiating current contracts.

While Allina Health has said they are “disappointed the union continues to demand unsustainable wage increases,” the MNA published information showing that executives are making $21 to one compared to an average registered nurse. Similarly, M Health Fairview executives are making $40 to one in their pay ratio. Dittrich also said that, in bargaining, executives have focused on the wage increases and have ignored staffing concerns.

In looking ahead, the MNA press release from Sept. 15, 2022, stated, “As the three-day strike concludes, nurses stand ready to resume negotiations to win fair contracts to protect patient care and the nursing profession at the bedside. Hospital executives with million-dollar salaries can afford to make the changes necessary to protect care and working conditions at the bedside.”