Yes 4 Minneapolis works to get 12,000 signatures to put question on ballot 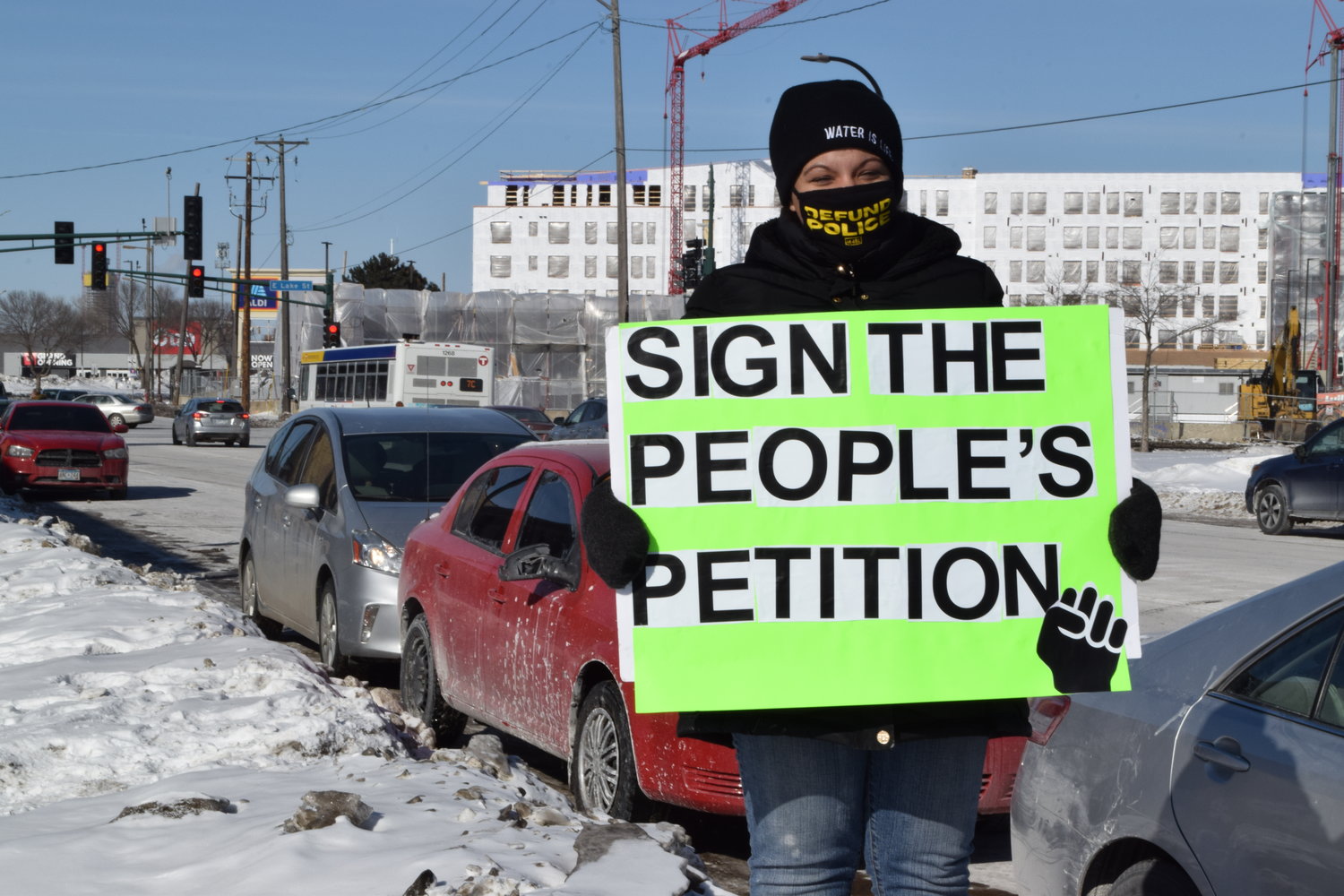 Community Activist Julia Johnson holds a sign for visibility during Yes 4 Minneapolis outdoor event on Feb. 13 and 14, 2021 to sign the people's petition. "This is a historic moment where the community is able to decide the future of Minneapolis community safety systems. I'm really excited for the wonderful ideas that we're gonna bring forward as we develop these new public safety measures." (Photo by Jill Boogren) 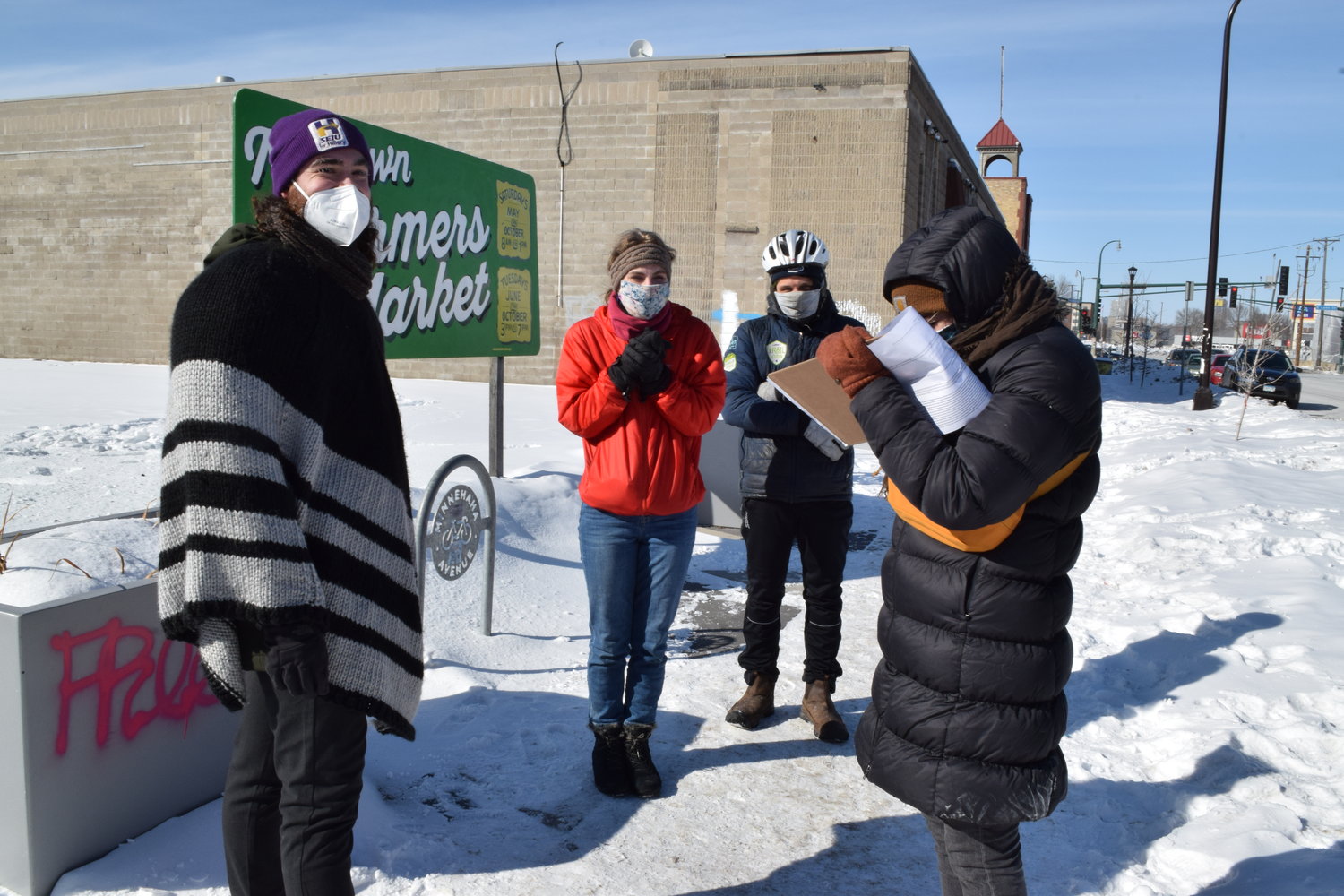 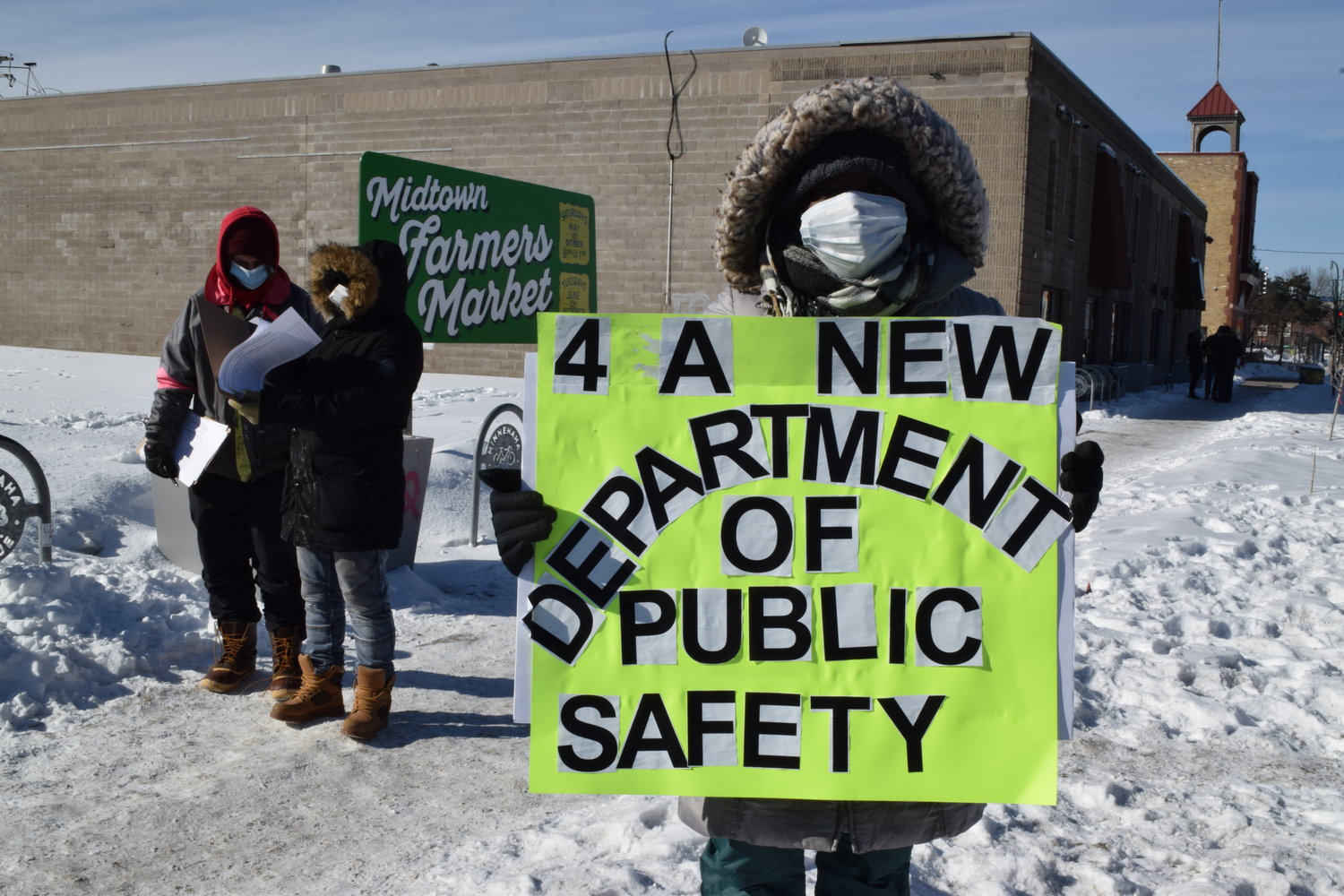 Yes 4 Minneapolis Campaign Manager Corenia Smith bundles up on the coldest weekend of the year to launch Yes 4 Minneapolis, a people's petition to amend the City Charter to replace the Minneapolis Police Department with a new Department of Public Safety.
Previous Next
Posted Wednesday, February 24, 2021 11:43 pm
By JILL BOOGREN

There are a lot of ways to spend a day when windchills are blowing in the subzero digits. Standing on a sidewalk gathering signatures isn’t likely to make anybody’s Top 5 list. Yet on Feb. 13 and 14, 2021, people – those holding the clipboards and those who came to sign – spent the coldest afternoons of the winter doing exactly that.
Taking place outside in front of Moon Palace Books and the Midtown Farmers Market on Minnehaha Ave., the petition drive was the launch of Yes 4 Minneapolis, a people’s petition to place a charter amendment on the November ballot that would replace the Minneapolis Police Department with a new Department of Public Safety. And people arrived by car, on foot and even by bike to sign.
“I’m here ‘cause I wanna see some reform, more than reform. I want to completely change the Minneapolis Police Department ‘cause I think we definitely need it,” said Ellen Wiederhoeft after signing the petition.
Also signing was Andy Harris, who said, “I’m here because I work with incarcerated people and I know the system tends to destroy more than it protects, and we need to change that.”
Campaign manager Corenia Smith called it an opportunity to lead and restructure what safety looks like in Minneapolis, moving away from a police-only model to one that’s integrated, with a holistic public health approach.
“It’s beyond policing. It includes housing, it includes people being able to have economic justice, and it addresses some of the underlying conditions that the current model and system is not addressing,” said Smith.
If approved by voters in November, the amendment would remove the section of the City Charter (Section 7.3) that requires the city of Minneapolis to rely on a police-only model of public safety and establish a new Department of Public Safety that would integrate public safety into a comprehensive public health approach, including licensed peace officers as necessary. It would not eliminate all police officers or get rid of 911 or 311 for emergency responses.
A similar charter amendment led by the Minneapolis City Council last year was blocked by the Charter Commission, and a renewed effort is underway again this year. As a “people’s petition,” however, Yes 4 Minneapolis wants to take this to voters on their timeline. Needed are 12,000 signatures from registered Minneapolis voters to ensure the question will be on the ballot this year.
Yes 4 Minneapolis is a coalition of more than a dozen organizations, including ACLU, Coalition of Asian American Leaders, Minnesota Youth Collective, Reclaim the Block, Showing Up for Racial Justice Twin Cities and others. More information is at yes4minneapolis.org.
“The people of Minneapolis, people everywhere, deserve to feel safe. They deserve to have a public safety system in place that people can trust and that they can call on when they need them, and the current system is not that,” said Smith. “Minneapolis folks feel like the time is now to reshape it.”