Potential along 38th St. being tapped

Ground broke on Wed, Oct. 19, for the first of several buildings that will reshape 38th Ave. west of the light rail station. Calling it the first step, community leaders praised the vision of the project and the way it will fit into the neighborhood. 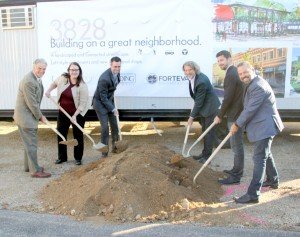 The new building at the southwest corner of 38th St. and 28th Ave. will wrap around the existing streetcar commercial building owned by Forteva, and will include 51 market-rate apartments and four retail spaces. The new building will replace surface parking, a tiny service garage, a one-story concrete block building and a duplex on portions of four properties. 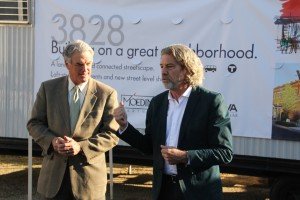 The commercial space will face 38th St., and ground floor residential units will face 28th Ave. Forteva will be incorporating a solar installation, an electric car (EV) charging station, and perhaps an electric Car To Go.

There will be 34 new off-street parking stalls screened from the road that will be used for resident and business parking. Construction will take between 12 to 14 months. Viewed as a transit-oriented project, developer Michael Lander of Lander Group pointed out that the plan for the site matches the SENA neighborhood plan developed in 2007. “Lander Group never met a parking lot it didn’t want to build on,” commented Lander.

During the groundbreaking ceremony, County Commissioner Peter McLaughlin recalled, “They laughed at us 20 years ago when we said there would be development along the light rail lines. …The energy around light rail has been incredible. I’m very excited we’re going to see investment here at this corner.”

This is the first of several buildings being planned by the Lander Group for the stretch east from the light rail station that will “transform” the area, according to Council Member Andrew Johnson. “Great things are happening here,” Johnson stated. 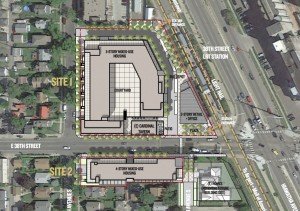 Photo left: The project at the corner of 28th and 38th is the first planned by the Lander Group, and will be followed by work near the light rail station at 38th and Hiawatha Ave. Work at the light rail station will include several buildings housing housing and retail. It will likely be done in phases and could begin as soon as fall 2017. (Photo by Tesha M. Christensen)

Six houses along 29th will come down within the next few years to make way for several planned buildings at the 38th Street light rail station, as well as allow buses access to 29th. A five-story apartment building will wrap around The Cardinal, and along the light rail line, there will be a two-story retail and office structure. Across the street, the intent is to replace one house and the Cardinal parking lot with a four-story mixed-use housing building. Included in the plan are a courtyard and parking area.

Lander pointed out that the demographics of the neighborhood had changed over the past 25 years when 75 percent of homes had children in them. Today, just 25 percent of homes have children, which changes the type of housing citizens are looking for.

The Lander Group envisions its retail as an amenity to those who live in the building, and seek out unique and out-of-the-box businesses. There may be a shared kitchen in one area to help several businesses with the large cost of kitchens, for example. Anyone with ideas on businesses for the area is encouraged to contact Andy Root of Forteva at 612-414-6113 or aroot@forteva.com.