Remember to care for the trees 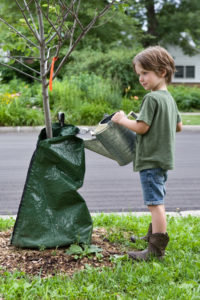 This spring, 9,400 boulevard trees were planted in the city of Minneapolis.

According to Minneapolis Parks and Recreation Forestry Director Ralph Sievert, “The new plantings include river birch, Kentucky coffee tree, buckeye, tree lilac, alder, ornamental pear, honey locust, linden, hackberry, gingko, larch, and more. These are trees that do well here, but haven’t been planted in large numbers before. This year we went for a big mix.”

The trees got in the ground in record time. In response to the pandemic, the park board had to come up with a new tree-planting strategy. Instead of sending several staff out together, crew members worked individually from small utility vehicles. One person dug holes, the next person planted trees, and the last person mulched and watered them. Sievert said, “It worked so well, we might stick with this method in the future. We got the whole job done by Memorial Day, which was weeks ahead of schedule.”

The park board has five large capacity trucks for watering, but they focus on trees that homeowners can’t get to: those planted on medians, in parks, and in front of apartment buildings. If your home or business has received a new tree, it is up to you to keep it watered – and the first year that a tree is in the ground is critical.

Every new tree comes with a slow release water bag zipped around its trunk. The bag should be filled by hose or bucket once a week. Its contents will release slowly over several hours, allowing for better water absorption into the roots.

Sievert has been in the forestry department long enough to see several dramatic tree events hit Minneapolis since the invasion of Dutch elm disease in the 1970s.

American elm had been the dominant species across the city, and the loss of the nearly 100-year-old shade canopy was devastating. Realizing that monoculture plantings had failed, the city changed gears and planted dominant species block by block instead.

When the Emerald Ash Borer arrived a little more than 10 years ago, Minneapolis began to suffer another huge loss of its boulevard and park trees. Sievert said, “We’re in year seven of our eight-year plan to remove all of the ash trees from Minneapolis boulevards and parks. By the end of next year, about 40,000 ash trees will have been removed and replaced. The only ash trees left on city boulevards will be the ones residents are paying to treat themselves for Emerald Ash Borer.

“In light of all that, we’ve revamped the way we look at boulevard trees once again. The latest rule is that if a block has more than 10% of any one kind of tree already established, we won’t plant any more of that species. The key is to diversify.”

It is unusual for a municipality to provide boulevard trees at no cost to homeowners. The park board also removes sick or dying trees and grinds their stumps free of charge.

The tree canopy in Minneapolis is currently about 29%. The higher the percentage of tree canopy, the better off city residents are. Trees increase energy savings by providing shade; they decrease storm water run-off by mitigating rainfall; they increase property value with their beauty.

Sievert said, “The pandemic has hit us hard this spring and summer, just like it did everybody else. In a normal year, the Minneapolis Park and Recreation Board would receive significant revenue from events held in parks like weddings, concerts, fun-runs, and the like. This year, that hasn’t happened. We’ve kept our public spaces open, but we aren’t hosting events to discourage people from gathering.”

That has created a predicted budget deficit next year of approximately $6,000,000.

Sievert said, “The 2021 planting season is going to be tricky. Maybe there won’t be money for trees in the spring? Let’s take care of the trees we already have, by remembering to keep them watered, and by being careful with lawn mowers and weed whippers when working around the base of trees. Any damage to their bark is an invitation for pests and disease enter.”