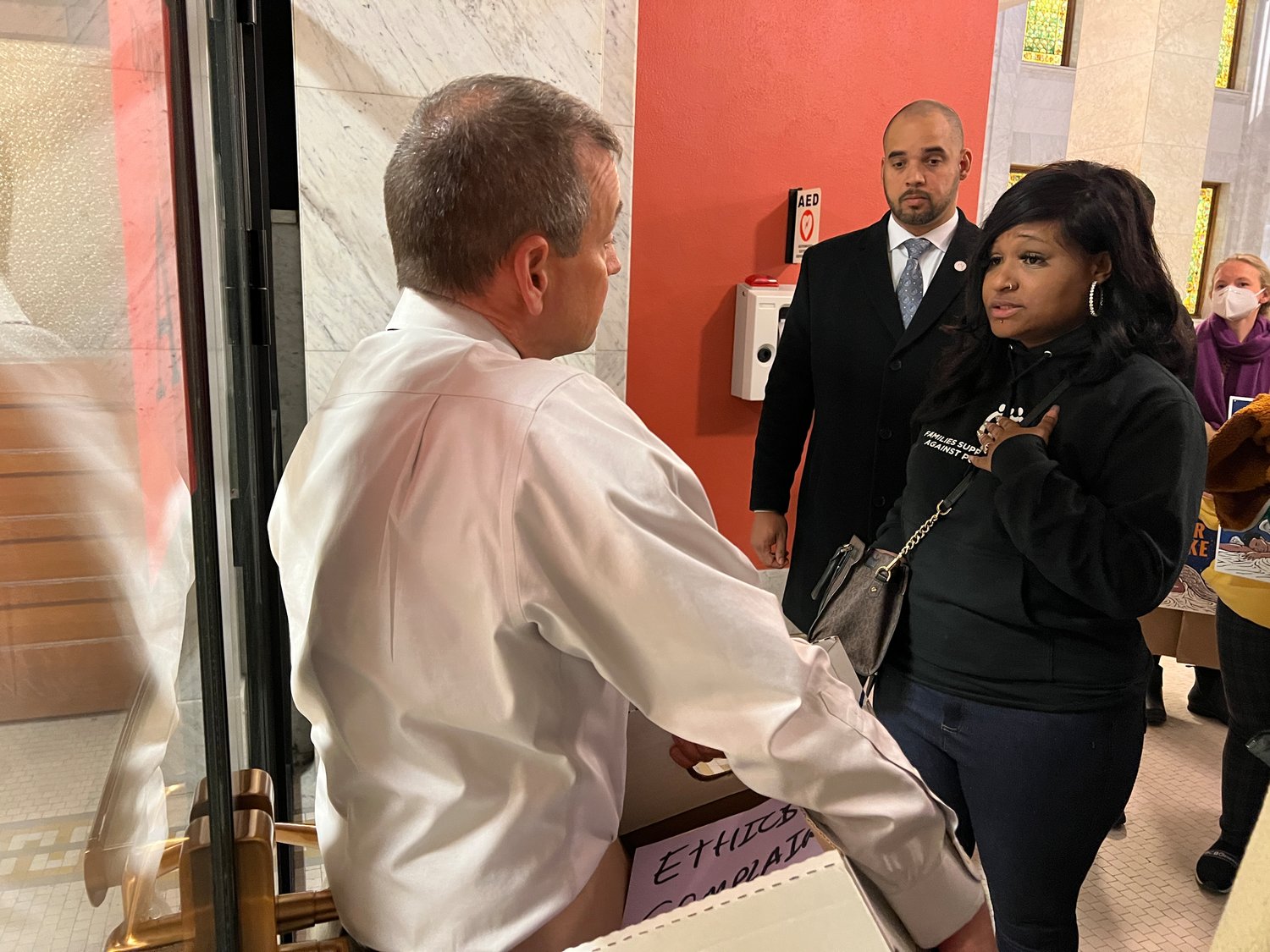 Toshira Garraway of Families Supporting Families Against Police Violence hands acCity of Minneapolis staff person an additional 1,100 complaint forms signed by Minneapolis residents. Called The Residents' Complaint, they allege ethical violations by Mayor Jacob Frey in his handling of the killing of Amir Locke by the Minneapolis Police Department. (Photo by Jill Boogren) 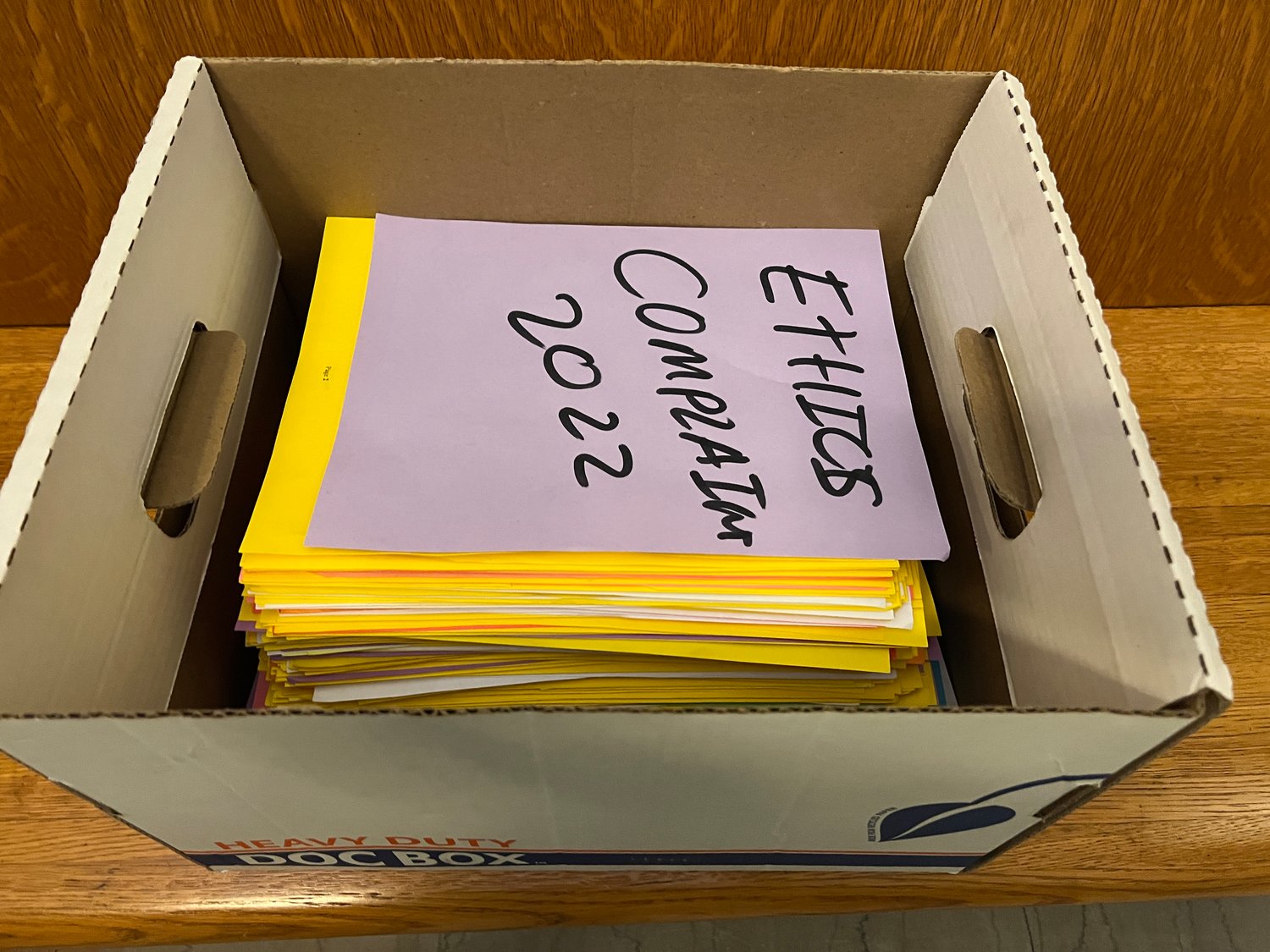 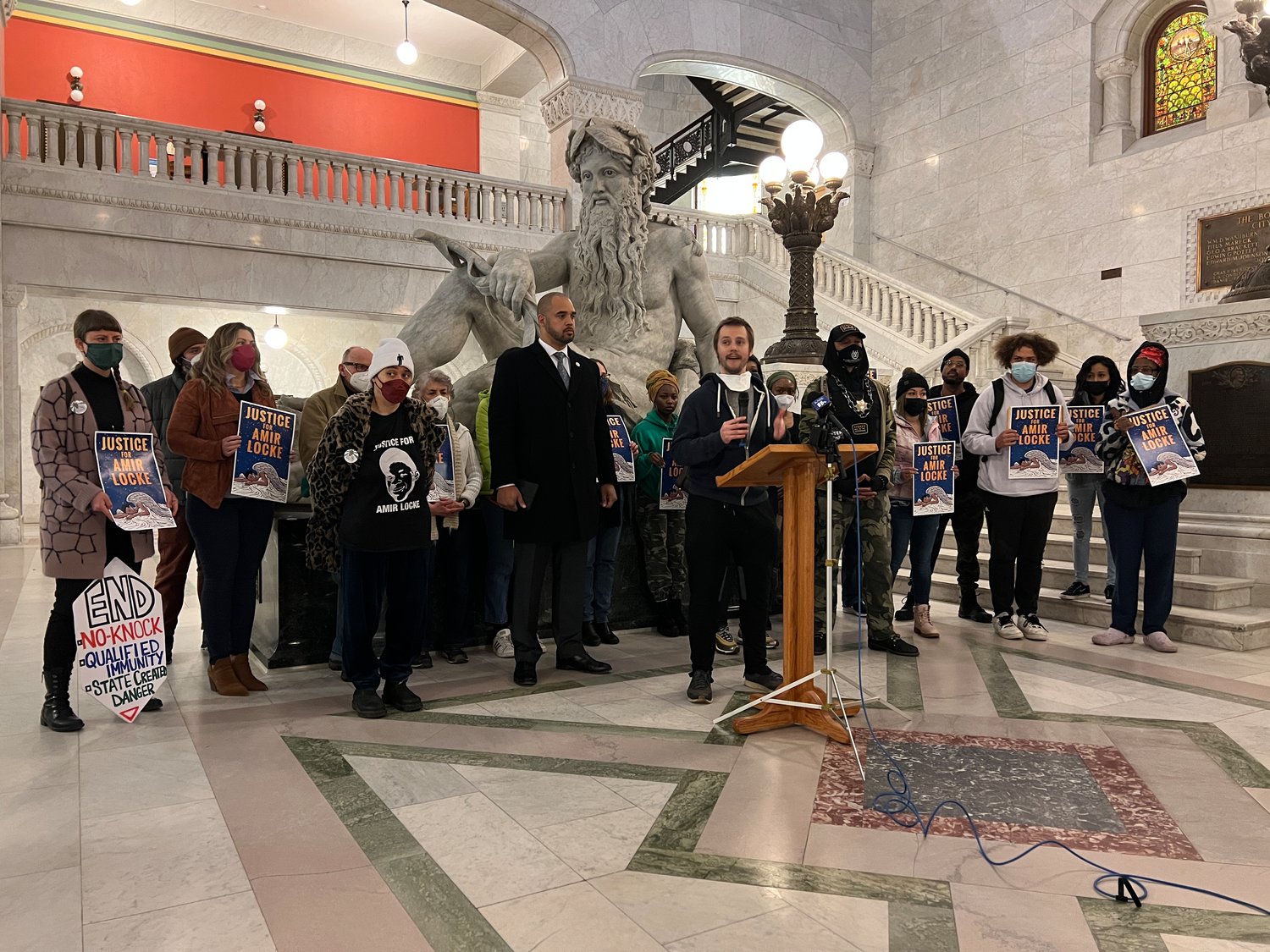 "When we submit an ethics complaint, we want it taken seriously. 2,400 complaints dismissed? That is beyond wrong," said Toshira Garraway of Families Supporting Families Against Police Violence. "They dismissed 2,400 voices of the people who've had to live in this community."

On March 31, residents returned to Minneapolis City Hall to denounce the decision by ethics officer Susan Trammell and the Ethical Practices Board to dismiss ethics complaints submitted in February by 1,300 residents against Mayor Jacob Frey for the circumstances surrounding the fatal shooting of Amir Locke by the Minneapolis Police Department (MPD). The Ethics Board also dismissed any future, similar complaints. Despite the March 15 ruling, residents delivered 1,100 more complaints to a city staff person after the press conference.

The Minneapolis Ethics in Government Code names three aspirations as ethical standards: trust, fairness and accountability. Austin Blanch, a resident of Ventura Village who was among those submitting a complaint, asked during the press conference whether these aspirations were being met by city leaders.

"Did the MPD act honestly, openly and fairly when they called Amir Locke a suspect four times in their initial press release, was that ethical?” he asked of the group assembled at city hall, who replied with a uniform, "No!”

Blanch also asked whether it was ethical for the mayor and interim police chief to walk out of their own press conference as community members called attention to reporting discrepancies, and for the mayor to campaign on having banned no-knock warrants despite not having done so. Referring to the fact that Officer Mark Hanneman, who killed Locke, had not been fired, Blanch asked, “Is that someone we want working for the city of Minneapolis”? To each of these and more, residents responded with a resounding, “No!”

The ethics complaints were dismissed under Rule 7.6 of the bylaws, which allows the ethics officer to dismiss a complaint if it appears to be “duplicative of another complaint, untimely or not meriting further investigation on its face.” The board upheld Trammell’s decision, and the complaint is now closed. In a follow up request for clarification, city spokesperson Sarah McKenzie shared by email that duplicate complaints are treated as one, which is then addressed against a number of factors, yet no details were given as to how these were applied to the specifics of The Residents’ Complaint. According to McKenzie, “Details about complaints closed without imposition of discipline are limited to existence and status. There is a complaint… about Mayor Frey and the status is ‘closed.’”

Jennie Leenay, resident and community member of George Floyd Square, expressed frustration over spending the past two years seeking justice in every possible way – taking to the streets, chanting, going to government buildings, talking to people – and being told time and time again, “Oh, you’re doing it wrong. You’re just doing it wrong. There’s a better way of doing this.”

Filing an ethics complaint was considered a formal means to have their voice heard, yet the complaints were dismissed.

Angela Rose, Minneapolis homeowner and former president of the Minneapolis NAACP, said the people of Minneapolis have yet to see any real change when it comes to the MPD, transparency and accountability.

Full text of The Residents’ Complaint is at theresidentscomplaint.com.