Learn to be more pro-active about the waste you produce 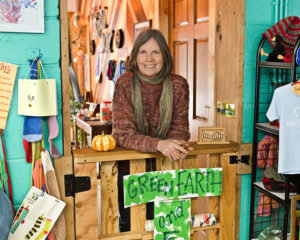 Wonder where your waste ends up?

A standing room crowd gathered at the Matthews Park Rec Center on Feb. 3, 2020 to hear about the changing world of waste creation and waste management from Kellie Kish, Recycling Coordinator for the city of Minneapolis; Kate Marnach, co-founder of the zero waste store Tare Market; and Nancy Ford, owner of the Repair Lair.

According to Kish, the contents of the black carts (58% of garbage collected) goes to the Hennepin Energy Recovery Center in downtown Minneapolis, and is incinerated. That’s your trash.

The blue carts are emptied, and the mixed recyclables are brought to Eureka Recycling in northeast Minneapolis where they are sorted and processed for sale to new markets. Recyclables account for about 20% of the waste collected.

While recycling is not mandatory in Minneapolis, 97% of residents choose to have a recycling cart. The contamination rate for recyclables last year was 8.5%.

The biggest contaminants were plastic bags, product wraps (like what goes around a six pack of pop), and plastic film. Kish admonished the crowd, “If you remember nothing else from this presentation, remember not to bag your recyclables and to keep plastic bags out of your recycling cart!”

The newest alley addition, the green carts, contain food scraps and other compostable products like paper towels, tissues, pet waste, and 100% compostable cutlery and dishes. Along with yard waste, the contents of these bins are taken to a transfer station in southeast Minneapolis, reloaded onto semi-trucks, and driven to a compost site in Rosemont.

Even though organics recycling is a new program in Minneapolis, the opt-in was extremely high this year for residents. With almost 52,000 Minneapolis households participating, the green carts account for about 18% of the total waste collected.

Kish said, “In a country where 40% of the food produced goes to waste, organics recycling matters.” One of her goals for 2020 is to hit the 50% mark for all Minneapolis households participating.

Note that all compostables must be placed in a paper bag, a compostable bag, or wrapped in newspaper before being put in the organics recycling bins.

If any readers are compost enthusiasts, Kish is looking for volunteers to help with the spring compost audit – a process by which compost is evaluated for contamination. Last year, the contamination rate was less than 1%. She recommends a fairly strong stomach, as there can be surprises.

Kish is also organizing a field trip to the compost site in Rosemont by bus in early summer, so people can see how the process works first-hand. To get on the waiting list for either opportunity, email kellie.kish@minneapolismn.gov.

Tare Market co-owner Kate Marnach explained how she got to the point of opening a package-free, re-fill store last year. She said, “My parents raised me to understand the value of recycling, but somehow the other ‘Rs’ went right by me. In our business, we see the solution as an inverted triangle that starts at the top with Refuse, and goes through Reduce, Re-use, Recycle, and finally, Rot (compost) at the bottom.”

Marnach debunked the myth of zero waste being successful only if you can fit a year’s worth of trash in a mason jar. She said, “It’s more important to set goals that are attainable. Start with simple things like keeping re-usable shopping bags in your car, purse, or backpack.

“When shopping, choose items sold in glass or paper instead of plastic.

“Learn how to store food properly to minimize food waste. Don’t put potatoes and onions in the same drawer – the potatoes will sprout. When your celery gets limp, cut off the ends and stick it in a cup of water. Swaddle your greens in a damp cloth in the refrigerator, and skip the plastic bag. Why does everything we eat and drink have to come in contact with plastic?

“Simplify your life with fewer clothes, and fewer toys for kids and grown-ups. Consider giving experience gifts instead of material gifts.”

Repair Lair owner Nancy Ford said, “My main message is, buy less stuff. You’ll never hear that as a major ad campaign though, because it means nobody is making any money. By the way, the bigger and more conspicuous an ad campaign is – the smaller the likelihood that you’ll ever need the product being advertised.”

Ford founded Repair Lair five years ago. It’s one of two stores in the U.S. that offers consignment and repair of outdoor equipment and clothing under the same roof. She advocates buying second hand, and says that customers should expect to pay about 30% of what an item would cost new.

Ford is also a founding member of ReUSE Minnesota, a member based non-profit focused on bringing visibility to the reuse, rental and repair sector.

The three presenters offered three different vantage points on rethinking waste but, at some point, all circled round to the same thought. As we approach the 50th anniversary of the first Earth Day observance, now, more than ever, less is more.

Mark your calendars for the South Minneapolis Green Fair on Saturday, April 18 from 12-4 p.m. at Roosevelt High School. The Messenger is a media sponsor of the event. Learn more ways to be proactive about the waste you produce, and have fun doing it.