Riding across Minnesota at 84 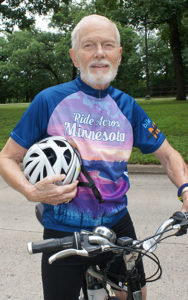 While Wayne Tellekson didn't really enjoy biking 40 miles a day this last year, he did enjoy the people, the scenery, and the experience. And when you ride through the big orange arch at the end it feels like quite an accomplishment, he said. (Photo by Terry Faust)

Wayne Tellekson had convinced himself that last year would his final ride with Bike MS.

Most years since 2009, Tellekson had joined a group of avid bikers who rode 250 miles over five days raising funds for the National Multiple Sclerosis Society. He was 83 in 2018. It was time for him to hang up his bike for those long distance treks, he told himself.

But Tellekson’s resolve to stop riding crumbled when one of his biking buddies asked him if he was going to do the Bike MS in 2019.

“Right then, I realized that I needed to do it again, even at the age of 84. I changed my mind in an instant,” Tellekson recalled.

Doing more than writing a check

The Longfellow resident first becomes involved with the Multiple Sclerosis Society when his son was diagnosed with MS in 1996.

The next year, Tellekson’s daughter Karin participated in a roller blade event, skating from Duluth to Hinkley to raise funds for the national health organization. Karin moved on from roller blades to bikes when the Multiple Sclerosis Society switched to long distance biking as a fund raiser. The group started TRAM (The Ride Across Minnesota), now called Bike MS, the five-day, 250-mile ride held each summer in July.

Tellekson had always written checks in support of his daughter’s participation, but one day he decided that he could do more than just write checks. If he rode in the TRAM himself, he could raise even more money to combat MS.

When he floated the idea by his wife, Sindy, and his three children, they objected, saying that the old, heavy bike he had ridden around town was not fit for a 250-mile trek.

But they knew his heart was in the right place, so they got together and bought him a new bicycle fit for long distance riding Still, Sindy was uneasy about the prospect of Wayne going off that first year and riding for five straight days.

“Sindy knew I was stubborn and she worried that I would keep riding until I fell over, so Karin agreed to ride behind me to make sure that I stayed vertical.”

Doubts about his decision

During this year’s ride, Tellekson, himself, had some doubts about the wisdom of his quick decision to do the Bike MS. again. He had second thought after another biker, who was also 84, had to drop out after two days because of some heart problems.

“I ended up being the oldest person, out of 450, on the trip,” Tellekson said. “And I was probably the slowest. People were passing me all the time because my legs just wouldn’t move very fast. I knew I wasn’t in good shape for long-distance biking. I only decided to do ride about three weeks before it started so I hadn’t trained for the ride as I had in the past.”

Each day during the five-day event Tellekson was able to take advantage of the sag wagon, a van that picked up riders and drove them along the route for a while, giving them a break from peddling. He used the sag wagon for about 10 miles each day, but that still left about 40 miles that he needed to bike.

“Those last few minutes just before rest stops were the hardest,” he remembers. ”That’s when I said to myself: ‘This is really foolish. Should I really be doing this?’

“But I never thought about stopping. I was never ready to give up as rough as it was to keep going.“

Tellekson said he envied the younger riders who kept passing him by. “Those guys whizzed by me and their legs were just like pistons. They were going 25 miles an hour. I looked at their legs and I said to myself ‘How do they go that fast?’ At the most, I could do 19 miles an hour and that was going downhill.”

“My knees are probably the weakest part of my body when it comes to biking. I just don’t have the strength to push as hard as those younger bikers do. I don’t wear clips that help with the upswing. If I did, I am afraid I would forget that I have the clips on. Then, when I start getting off the bike, I would fall and land in a heap. “

‘A real feeling of accomplishment’

“I enjoyed the people, the scenery and the experience, but biking that far is really not fun, at least not for me.

“That long ride each day is a real strain, but when you ride through the big orange arch at the end of the five days, and people are there cheering you on, there is a real feeling of accomplishment. More important than the cheers is knowing that the money I raised -- $4300 – will be put to good use combatting Multiple Sclerosis.

“I realize there are not many people my age who are doing something as foolish as riding 250 miles in five days. But my body can handle it, at least for now. I don’t feel 84 even though I am 84. I really can’t take credit for my condition, maybe it’s genes. I eat healthy but I don’t obsess about what I eat. I walk and bike, but I don’t spend a lot of time exercising just to stay in shape.

“This year, I told everyone it would be my last ride But I made it this year, so if I train maybe I can do it again next year. Maybe I will break my pledge again not to ride. Who knows what next year will bring? I’ll just have to wait and see.”

Saga of the Ride

In 2019, as he has done other years, Wayne Tellekson composed a poem—a saga, he calls it— celebrating the five days he spent on his bike, raising funds for the Multiple Sclerosis Society. Here is the final stanza from this year’s saga:

The Orange Arch of Triumph, we rode through with pride.

Tired, proud and happy, it had been a very good ride.

We’d raised funds for MS research, that explains our smiles.

A quick lunch and we hurried off. A hurried goodbye to friends.

Next year will be another ride. Will you? That depends.