Teachers at Roosevelt High School are teaming up to create a farm-to-table system that celebrates indigenous food. A new Three Sisters garden, along with a perennial community garden and a ramped up culinary arts program promise to serve students and the community alike. The program will showcase the farm and food systems.

“I think it will very much be almost a complete closed local community food system,” said ESL and Food Educator Ben Rengstorf. “It will be an example of how food can travel through the food system and back.” 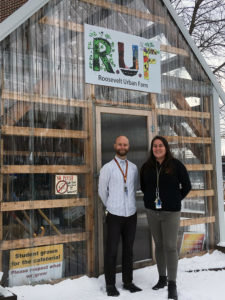 The Roosevelt Urban Farm (RUF) squad, which began about five years ago as an after-school program and is now a science elective, has been cultivating a number of gardens, each with its unique features. In front of the school’s main entrance on 28th Ave. is an old piano that has been turned into a planter.

Along the same front face of the building is a turtle garden, whose benches and eventually the whole thing will be covered by Minnesota river grapes. Next to that is a greenhouse signposted with the letters RUF, where strawberries are currently grown.

There’s also a fully-planted rain garden on the northwest side, another area where they’ve added plants and food trees, including cranberries, blueberries, and serviceberries. Indoors they have aquaponics labs, wherein tilapia and koi fish provide natural fertilizer for the beans and spinach grown in the garden. And they’re getting specs to add a hydroponics (without fish) lab.

“Everything we grow we sell to the lunchroom,” said Shannon Nordby, an indigenous teacher at Roosevelt specializing in urban farming science. This is done through a partnership with Spark-Y, who handles the transaction between RUF and the lunchroom.

All of it provides a hands-on farming experience that is available because it is on the school campus.

“It’s really hard to get kids to go off site sometimes,” said Nordby. Being here is a “much better place to be able to participate.” 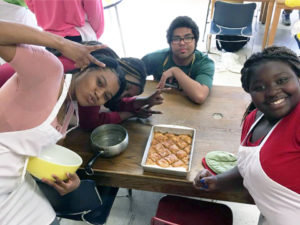 The new Three Sisters garden, which will be on the east side of the school building, will add yet another dimension. An indigenous planting method, the Three Sisters—maize (corn), beans and squash—are planted to benefit one another. According to Nordby, pole beans climb up the corn and also put nitrogen back into the soil. Squash protects the garden from raccoons and other pests because of the sharp parts on their vines, and it also provides shade.

The Three Sisters garden is what most excites Nordby, who is Native American, and tries to weave in as many indigenous methods as possible. This year, in teaching other ways to look at Thanksgiving, she talked about the many early indigenous foods that were passed along.

“So I made them wild rice, and they tasted it,” she said. They continue to try different foods and buy indigenous seeds.

An alumnus from St. Paul Culinary Arts Program, Rengstorf already has a hand in teaching cooking at the school. But what has been offered as part of a Beacons after school club will now move into the school day—next semester as an elective for students in Rengstorf’s ESL program, and next year, as a general elective for all students.

Rengstorf’s interests lie in teaching food traditions and culturally relevant food, examining the indigenous food system of each place, be it East Africa, Latin America or South America. An emphasis on Native American food traditions from this region will fit right in.

“We’ll be doing lots of crossover between what they’re doing and what we’re cooking, having students interact across the classes,” said Rengstorf. 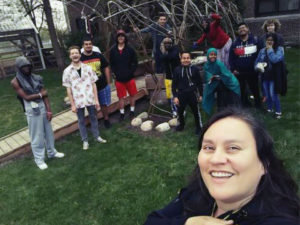 Photo right: Members of the Roosevelt Urban Farm squad in front of the turtle garden. (Photo courtesy of Roosevelt HS)

The plan is to get food grown in the garden. Nordby’s classes will care for the garden. They can all harvest together. The cooking classes will produce food that they can then eat together. They’ll then recover food scraps and return them to the garden to nourish the soil. They’ll decide what they’ll eat right away versus preserve, for example by drying beans or canning and freezing corn. They’ll use foods seasonally in ways that represent a more traditional food system in contrast to today’s global system that ships bananas and other non-native produce across vast distances.

But Rengstorf plans to take the instruction even further and incorporate a broad range of experiences by bringing in chefs from around Minneapolis-St. Paul and the surrounding area to share their expertise.

The class will be set up to share food histories and a recipe from local chefs including Diné Chef Brian Yazzie of Yazzie The Chef, Doug Flicker of Bull’s Horn, Ruhel Islam of Gandhi Mahal, among others, who will also help students cook the food. Students will then take that inspiration to talk about their own food histories and foods they want to explore.

“We’ll always reflect their experience and expertise back to students,” said Rengstorf.

This type of shared experience was evident in a recent cooking class, in which tacos were on the menu. They prepared everything, from cooking the meat, chopping up vegetables for the pico de gallo, to making tortillas. “ knew things they had learned from their families about how soft the dough is supposed to be, how to flip it,” Rengstorf said.

The indigenous garden and kitchen program is the result of a collaboration with the Standish-Ericsson Neighborhood Association (SENA), Ryan Seibold (Hiawatha Food Forest) and other community partners with interest in new permaculture gardens featuring native plants and food species.

As a community garden and kitchen that will be open to the community, it will take a lot of hands. SENA will remain a partner in designing and caring for the project.

A farm and food summit is planned for April 23 at the school that will bring students and community organizations together for panels, workshops and a meal activity under the theme “food justice.”

DREAM OF WILD HEALTH FROM FARM TO MARKET