Do you sell the business, shut it down or transition to a worker coop? 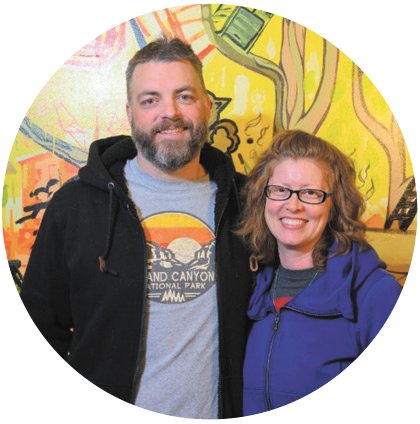 Jesse and Marion Dunbar of Happy Earth Cleaning sold their businesses to their workers when they moved back to Seattle, Wash.
Posted Wednesday, May 26, 2021 5:42 pm
Meet one worker owner

Tom Crouse, 32, of South Minneapolis is a worker owner of Happy Earth Cleaning in St. Paul. He’s been at Happy Earth since 2014.

“I was drawn to the supportive work environment, livable wages, and amazing people of Happy Earth. I have held nearly every role at Happy Earth in my seven years here, from cleaner to manager. I’m currently the sales manager, in charge of introducing new customers to our eco-friendly service,” he said.

“A worker co-op is just like any other company, except employees are welcome to buy into ownership, instead of profits benefitting only the private owners. Co-ops also have a board to guide big decisions, and employee-owners also have a say in big decisions. Otherwise, we manage and operate our business just like we used to when we were an LLC.

“Any year we’re profitable, I get to share those profits with my fellow member-owners, like a bonus, except we call it ‘patronage.’ I also get to vote in important company matters. So my work is both more lucrative and more democratic as an employee-owner. I also have more job stability, since it’s harder to dissolve a co-op (at least, the way we set it up).

“Happy Earth is more supportive than any place I’ve ever worked. I never planned to work at a cleaning company for seven years, but it’s just such a great environment filled with outstanding people.”

Business owners who want to retire have two options. They can sell or just shut down.
Christina Nicholson of Nexus Community Partners (2314 University Ave. Suite 18) told those gathered at a joint NENA/NEBA meeting that there is another exit strategy.
They can establish a worker cooperative.
Nexus works with business owners and employees to figure out if this step is right for them, and walks them through the process.
REI is a well-known business that is also a co-op. Locally, several grocery stores are set up as coops (including Seward Community Co-op and Mississippi Market) as is The Hub Bike Coop. As more workers want a say in their workplaces, Powderhorn resident Nicholson believes that this model will grow in popularity.
“Nexus supports strong, equitable and just communities in which all residents are engaged, are recognized as leaders and have pathways to opportunities,” said Nicholson. “The key to building more engaged and powerful communities of color lies in the interconnectedness between authorship, leadership and ownership.”
Nexus focuses on how a coop structure can help with wealth building in a community, in particular by creating BIPOC partnerships. A coop allows more people to be owners and then get a part of the profit that the company earns, she explained.

What exactly is a worker
cooperative?
Nicholson explained that worker cooperatives are owned and controlled by employee-members using a one-member, one-vote basis. This gives the workers the opportunity to have a say in how the company is managed. They earn a percentage of the profits, also called “patronage,” in addition to their regular wages.
Members elect a board of directors, a majority of whom are employees.
Typically, the board of directors hires a general manager (or management team), which in turn runs the day-to-day operations.

Is it a free for all?
A common myth about worker coops is that they are “a free for all.” People are concerned that if everyone is managing themselves that nothing will get done. “That is not the case,” said Nicholson.
A board of directors sets the direction of the company and operates according to a list of bylaws. “This sets a day-to-day structure, accountability and type of culture you want to build,” she said. “That’s part of what makes a successful business.”
This is not a top-down structure. It is not a carrot-stick model. Staff are not treated as children who need to be controlled. “It’s more of a servant leadership model,” remarked Nicholson. “It is a much more mutually accountable space. It can be much more empowering.”
In a worker coop, owners earn 33% more than they would if they weren’t part of a worker coop and retention is higher, according to Nicholson.
In an uncertain time like the past year, worker coops have shown they are more likely to keep jobs secure rather than lay people off. Worker coops are more likely to redistribute business funds to pay workers, reduce wages, or temporarily furlough wages rather than lay off workers.
“Worker coops are more resilient because it’s a collaborative space from the inception,” stated Nicholson. “When everyone is an owner, everyone has a vested interest in keeping the business going.”

How does the process work?
A worker coop is not an escape hatch for a failing business. But it can be a way to turn the business over to the experienced people on the ground.
Nexus works with businesses to first explore their ownership options. Then they assess the feasibility, which includes looking at the last three to five years of cash flow.
Step three involves figuring out the structure of the deal and the new organization and leadership team. If the business has cash reserves, that may be paid out to the owner immediately or over a set number of years. A loan and other businesses funding may be lined up by the new owners. The price of the business is set. “Just because you want to sell your business doesn’t mean there is a buyer on the other end,” observed Nicholson. In fact, two-thirds of businesses listed for sale never sell, and only 15% are passed along to a family member. Acquisitions by larger firms or out-of-state buyers often lead to layoffs and restructuring.
The owner and the worker owners negotiate to get to a competitive and fair sales price. Part of the benefit for the owner is seeing their dream continue once they’re gone and securing their legacy.
The businesses that fit in best with this model have a triple bottom line of social, economic and environmental concerns, said Nicholson.
Some owners continue working under the new structure for a time, while others leave right away. For those who want to move on to other things immediately, there is typically a longer training period before the transition is complete. The process typically takes 12-18 months, depending on readiness, speed of decision-making, and complexity of the sale.
“What employees are taking on is like a mortgage,” explained Nicholson. After the debt is paid, then the worker owners receive the patronage, which is like a bonus. “It allows them to invest in the business,” she said.
Nexus helps complete the sale and transition to the new business entity, and also sticks around to support the new worker owners and leadership through ongoing trainings over the next two years.
They charge fees throughout the process and some of the work is philanthropically funded.
Nexus is currently working with 15 companies who are considering a worker cooperative model. “I think this model is starting to get some legs,” said Nicholson. “I think in the next two to five years we will see more worker-owned cooperatives in the Twin Cities.”
Schedule a free 30-minute phone consultation by emailing cnicholson@nexuscp.org or call (651) 289-7038.

In 2018, the Dunbars decided they wanted to move back to their hometown of Seattle, Wash. They began thinking about a succession plan.
Potential buyers approached them, but they had concerns about selling the business to an outside buyer. They were worried their company would lose its “people first” culture, and that a new company would take their client list and lay off their workers.
So they started looking at employee ownership. They went through the nine-week Coop Technical Assistance Program (CTAP) offered through the city of Minneapolis that helped them understand coop development. Then they sent a larger group of employees through the program.
That group launched the process of selling their business to employees.
Thirty-two-year-old Tom Crouse of South Minneapolis is one of the worker owners.
“Transitioning your business to employee ownership looks remarkably similar to selling your business in a ‘traditional’ way,” he said. “There is a little more work, in the form of training and development for employees, but retiring owners can receive a fair price for their business and leave their legacy in the hands of those they trust (their employees).”