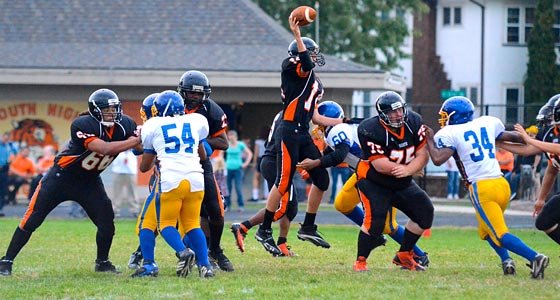 South linemen Austin Burnett (no. 75) and Areal Crawford (no. 66) give backup quarterback Josh Patterson time to throw on a 64-yard completion on Fri., Sept. 19. The Tigers routed Minneapolis Edison 46-7 for homecoming. (Photo by Matthew Davis)

“It's emotional,” Kimberly Adams, Sha-kym's mother, said. “Sometimes I have to walk away, take a break. You're so used to seeing your son out there and now he's not out there,” Kimberly added.

Kimberly and Shak-kym's father, Sharrod Rowe, normally sit in the bleachers at Minneapolis South's home games. In order to be in more of the background, the couple opted for a spot along the track facing the east end zone. Nonetheless, Sha-kym was still on the hearts and minds of the South students a month and 14 days after his tragic drowning in Lake Nokomis on Aug. 6. A few girls who knew Adams came over to visit with his parents at homecoming.

“It seems like almost if not every game [or] every other game, we meet new friends of his that he had been associated with,” Rowe said. “That's beautiful, that's really beautiful.”

Adams hasn't been forgotten either by the football team. Before the game, senior lineman Wyatt Peterson had been asked by a teacher in the halls how the team's morale was.

“Wyatt said the morale's good,” Tigers football coach Lenny Sedlock said. “Wyatt would have never known I heard that, but I brought it up [to the team] tonight because that's good. That's what they're telling other people, and you know it's true.”

As far as playing football goes, the morale has also improved. South delivered a homecoming game for the community to remember, a 47-6 rout of Minneapolis Edison.

Payton Bowdry rushed for 54 yards and two touchdowns on ten carries for the Tigers. Kevin Brooks also scored a rushing TD in addition to 30 yards on four carries.

Anthony Hockett threw for 248 yards on 10-15 passing. Kyle Helmstetter and Elerson Smith each caught a TD pass. Smith had a team-high 105 receiving yards on three catches.

Jawan Childs, Desmond Williams, Connor Leech and Steven Thell all picked off a pass on defense for South in a dominating performance. The Tommies didn't score until late in the fourth quarter.

Winning that game kept the Tigers in position to make a run for the Minneapolis City Conference title, something that hasn't been on the radar in recent losing seasons. “I like where we're going,” Sedlock said. “I'm proud of our guys because our last two losses, we could have won. We could easily be 3-1.”

For Adams' family, they've enjoyed seeing the progress of the team. They and the team have progressed together from the day of the tragedy to a somber football opener with Eden Prairie where the score hardly mattered. Weeks later, the journey has brought more healing for the family while the Tigers snatched their first win on homecoming.

“We like to show the support still,” Rowe said. “We're football fans. Even though our son has passed, we still want to show support.”