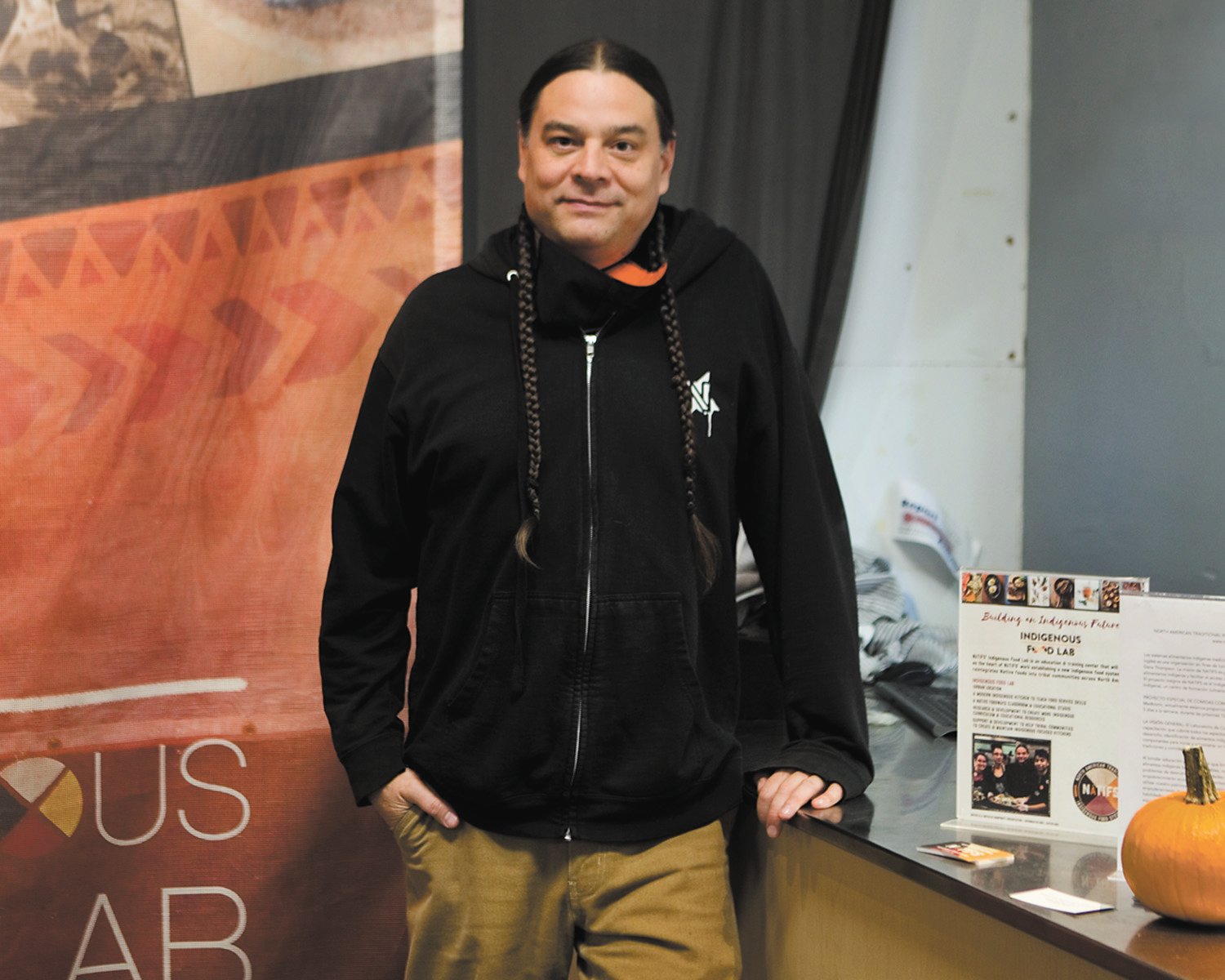 Sean Sherman at the Indigenous Food Lab, located in the Midtown Global Market. The Sioux Chef is dedicated to addressing the economic and health crises affecting Native communities by re-establishing Native American foodways. They are working to create a new North American food system that generates wealth, and improves health, in Native communities through food-related enterprises. (Photo by Margie O’Loughlin) 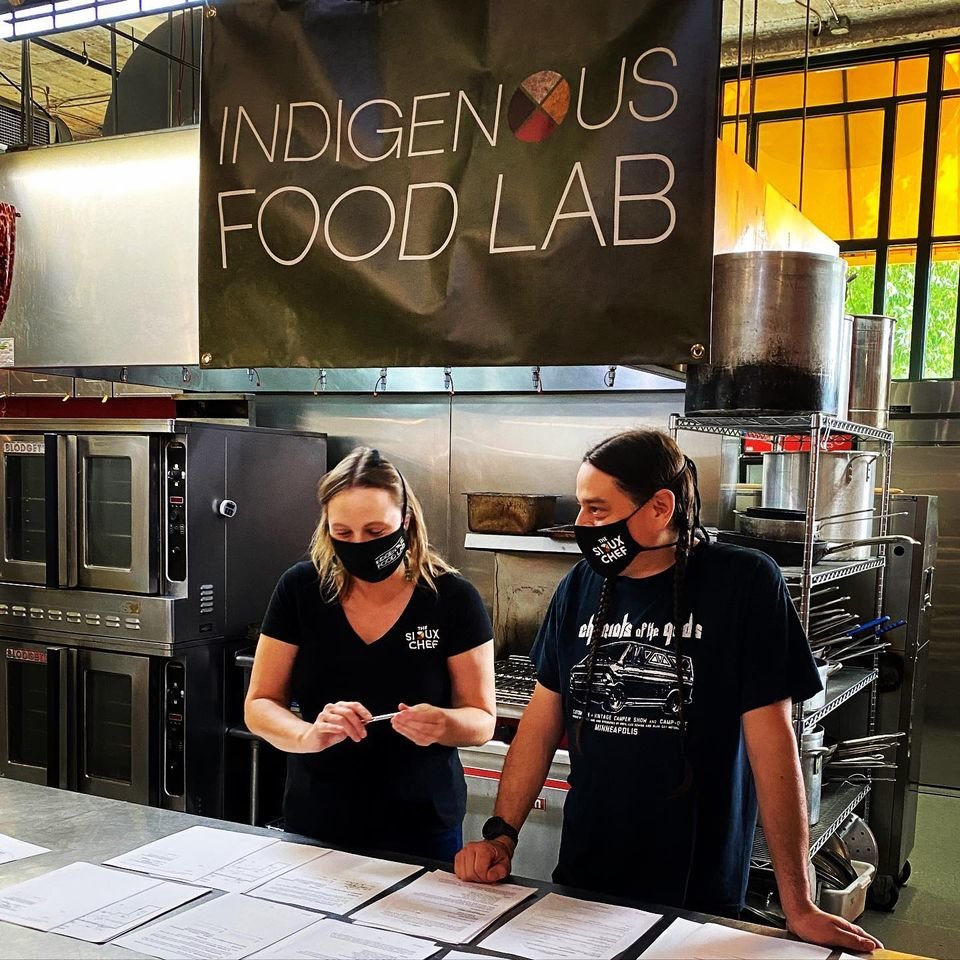 Sean Sherman was born on the Pine Ridge Indian Reservation in South Dakota. He said, “In the 1970s, Pine Ridge had one grocery store for an area the size of Connecticut. Our family was lucky to have access to fresh eggs and chickens from my grandparent’s farm, but mostly we depended on government issued commodity foods like canned meats, fruits and vegetables, powdered milk, government cheese. Everything was over-processed, full of salt, sugar, bad fats and oils.”

This was not the life lived by Sherman’s Lakota ancestors three generations ago. Sherman’s great-grandfather was raised on the plains with his traditional Lakota education fully intact, but things changed quickly as the settler population grew.

Following the 1862 Dakota-US War, Sherman’s grandfather and his peers were forced into Native American boarding schools, their hair was cut short, their traditions and their language were taken from them. Foodways could not be passed down once the family lines were broken. Native Americans across the continent became dependent on the food that was given to them, and their health declined.

“Native American males have an average life expectancy of 48 years; Native Americans females on average live to 52. Our communities have disproportionately high rates of obesity, heart disease, and type II diabetes. The tie to poor nutrition, and forced reliance on government issued commodity food products, is undeniable.” ~ Dana Thompson, NATIFS Co-Founder/Executive Director, is a descendent of the Wahpeton-Sisseton and Mdewakanton Dakota tribes.

When Sean Sherman goes to work every day, he isn’t just cooking for cooking’s sake. The Oglala Lakota Sioux chef, cookbook author, and promoter of Indigenous cuisine is reclaiming and rebuilding the broken foodways of his ancestors, before they are lost forever.
Six years ago, Sherman started an Indigenous catering business called the Sioux Chef, which would eventually employ almost two dozen people. He traveled across the Twin Cities with his award-winning Tatanka Food Truck. On the menu were, among other things, Indigenous tacos made with cedar braised bison, smoked turkey with forest mushrooms, sumac seared walleye filet, and grilled squash with pumpkin seeds. According to Sherman, “Native American food is not only delicious and beautiful, it is literally medicine.”
Once you take away the Colonial ingredients introduced to North America by European explorers, what’s left is food that is beneficial for heart health, and helps prevent diabetes, obesity, inflammatory diseases like arthritis, and even tooth decay.
All this begs the question that Sherman began asking himself years ago, as a young chef starting out in the restaurant industry. “Why weren’t there Native American restaurants all over the place?”
It was clearly time to open one.

Growing a vision
In 2016, Sherman and his business partner/spouse Dana Thompson submitted a proposal to the Minneapolis Park and Recreation Board. Their enterprise, The Sioux Chef, was chosen from a stack of applicants to develop a restaurant at the new Waterworks Park site near St. Anthony Falls. Their restaurant, called Owamni by the Sioux Chef, is still on track to open this spring despite the challenges of the pandemic. Owamni means “swirling water.”
The process has not been quick, but it has been clarifying.
Thompson said, “To broaden our knowledge base of Indigenous foods, we traveled across the country and talked with members of many different Native American tribes. We cooked together, and ate together. Sean and I formed the greater vision of reclaiming Native American community health through nutrition.”
“From then on, we saw the restaurant concept as a starting point rather than an end goal.”
Sherman and Thompson spent the next two years developing a non-profit organization called Native American Traditional Indigenous Food Systems (NATIFS). Their mission is to promote Indigenous foodways, and to facilitate Indigenous food access.
Sherman said, “The path for us now is very clear. With Indigenous food ingredients, and training for Native American cooks to learn to prepare time-honored recipes, we can strengthen our culture -- and strengthen our identity. By sharing this knowledge, and this training model, with Native people across the country, we can collectively be the answer to our ancestor’s prayers.”

Indigenous Food Lab
at Midtown Global Market
At the heart of NATIFS’ mission, the Indigenous Food Lab was born.
Thompson explained, “Sean and I were two kids born into abject poverty, but we were determined to raise money to develop the Indigenous Food Lab. Suddenly we were talking to the Rockefellers, and other major philanthropic organizations. Between June 2019 and January 2020, we raised about 75% of the needed start-up funds. We eventually found a location at the Midtown Global Market that fit our model, and that we could afford. Minneapolis commercial leases are not for the faint of heart.”
The Indigenous Food Lab has been up and running since June of this year. It houses a professional Indigenous kitchen and training center covering all aspects of food service, including research and development, Indigenous food identification, gathering, cultivation, and preparation, and all components of starting and running a successful culinary business based on Native traditions and Indigenous foods.

Food free through December
Sherman said, “In response to food insecurity made worse by the pandemic, as well as George Floyd’s murder and its aftermath, we mobilized our team at the Indigenous Food Lab.
“The staff and volunteers there prepare 400+ free meals/day as part of a collaboration with Minnesota Central Kitchen, and that number will soon double. We currently have support to feed homeless encampments, elder centers, people accessing food shelves, and other at-risk groups through December. We hope to raise funds to continue these efforts. Building strong community is at the core of what we do.”
For more information on NATIFS, or to sign up for a volunteer shift in the kitchen, visit https://www.natifs.org.