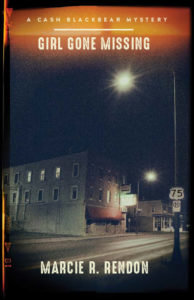 Still driving trucks and running pool tables for money, Cash is now navigating campus life at Moorhead State University. She’s feeling a little like a fish out of water when reports of missing girls, one of whom she recognizes as a classmate, start cropping up. Seeing them in her dreams, Cash cannot ignore their pleas for help.

Ever sharp and knowing her way around the Red River Valley, Cash pokes around until signs point to Minneapolis – brand new terrain for her. Here, she is hurled into danger where she has to rely on her gut, fast-thinking and ingenuity to reach safety.

As an Anishinabe woman coming of age in the 1970s, the fictional Cash carries the very real shared experience of Native children who were pulled away from their families and moved into boarding schools and foster care (Rendon, herself an enrolled member of the White Earth Anishinabe Nation, includes an Author’s Note in the novel’s end pages that speaks to this legacy and resultant historical trauma).

In Cash, Rendon gives us a multi-dimensional character who is guarded and private but who is intuitive, compassionate and resourceful – all of which draw the reader in and pull us close.

“Girl Gone Missing” is a satisfying read that leaves us wanting to know what Cash will do next – which is great, because Rendon is already working on the third installment in the series.

Rendon lives in the Standish-Ericsson Neighborhood. Her first novel, “Murder on the Red River,” won the Pinckley Prize for Debut Crime Fiction.

Chronicles of a Radical Hag (with Recipes) 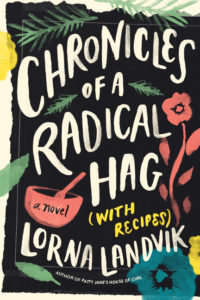 Nokomis resident Lorna Landvik’s latest novel, “Chronicles of a Radical Hag (with Recipes)” is a sweet elixir, a healthy antidote to busy lives and angry news cycles. In this story, Haze Evans, beloved longtime columnist with the Granite Creek Gazette, suffers a stroke, and the small-town newspaper’s editor decides to run her columns dating back to the 1960s, sometimes with corresponding Letters to the Editor.

Through Evans’ keen observations and recollections we are given a glimpse of her worldview, from her giddy back-to-school shopping days to her (only slightly) unhinged response to a reader’s unfavorable take on her column about disgraced former President Nixon’s pardon by President Ford.

Evans shares her encounters with everyday people and celebrities, along with stories of babies born and lives lived (and lost), as decade-defining events and crises unfold. As readers take this preamble through the ages, we also jump in and out of the present day as new fictional readers, including the editor’s teenaged son, experience Evans’ columns and related letters and cheer on her recovery in the hospital.

There is love and longing, sorrow and loss, family, community and above all, humanity.

If life is made up of a lot of little moments, this “Radical Hag” captures them very well. In one such moment it’s all hands on deck to care for newborn quadruplets. Who but Landvik – this time through the penned words of Evans – can turn what could easily ring out as a cacophony of a crying quartet into a sweet symphony, its own magical moment when life becomes a small party?

With “Chronicles of a Radical Hag,” Landvik offers a break from the noisier parts of our lives and instead serves up a bit of warmth, love and community. As for the recipes, there are plenty of options that will surely dress up any summer picnic. Enjoy!

In other news: The movie short for an earlier of Landvik’s novels, “Oh My Stars,” was screened at Riverview Theater on June 15. The goal is to show the film at festivals and ultimately get it made into a full-length feature. More about the project can be found at Oh My Stars Movie on Facebook or its GiveMN page.