The ‘Warbler Wave’ is coming

Numbers will soar in mid-May 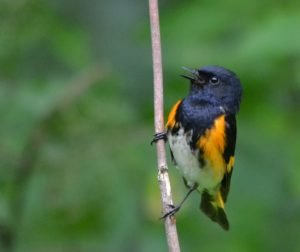 Why get excited about warblers? They’re incredibly diverse, colorful, and beautiful. They’re great singers too: a delight to the eye and the ear. They are passing through the Twin Cities right now from their wintering grounds in Mexico and Central America. Pictured here is the American Redstart, courtesy of Nina Koch (Tropical Wings, River Falls, Wis.). (Photo by Nina Koch)[/caption]

Longfellow resident Dave Zumeta walks the neighborhood every day, with eyes and ears lifted toward the sky. He has been an active birder for 61 years, and this guy knows his stuff. He has identified 182 different species of birds between the railroad bridge at 27th St. and West River Rd., and the Lock and Dam #1 – a distance of less than four miles.

Zumeta was hooked on birding by the time he was eight years old. It’s an activity that doesn’t require any fancy equipment to get started, especially for children. It’s a great family activity, and many species can be seen without binoculars.

Zumeta said, “All you need to do is to look and listen when you walk outdoors.”

Many people think spring is the most exciting time of year to bird watch. The “Warbler Wave” has officially started, which means that the northern migration of these small songbirds (5” average length) to their summer breeding grounds has begun.

The warblers are trickling in from Central America and Mexico, but their numbers will soar between May 10-20 in the Twin Cities. Some of them will stay in this area all summer, but many more will continue their migration to Northern Minnesota and Canada. According to Zumeta, “A person can see a ton of these little birds before the trees leaf out.”

Warblers are Zumeta’s favorite birds, bar none. He not only knows the subtleties of their markings, but can also recognize their songs. His favorite place to watch for warblers isn’t Costa Rica or the Greater Antilles Islands. It’s a sinkhole on 34th St. and 47th Ave. just a stone’s throw from his house. He said, “Seven Oaks Park is the reason we moved where we did. I think it’s one of the best places to bird watch anywhere – and it’s a warbler magnet.”

Zumeta has seen 26 different kinds of warblers there over the years. Even their names are beautiful: the Mourning Warbler, the Hooded Warbler, the Golden-winged Warbler, and the Bay-breasted Warbler, to name a few.

Because the sink hole is a large, natural depression in the ground, it affords protection for migrating warblers from wind and cold. The best days for birding, according to Zumeta, are nasty, rainy, windy mornings in mid-May. He said, “I’ve seen dozens of Yellow-rumped warblers hopping around on the pavement feeding on days like that. The park is surrounded by ornamental conifers such as white pine, white spruce, and northern white cedar. Warblers and other songbirds feast on the insects living in the buds.”

Zumeta is a longtime co-leader of the Longfellow Community Council spring and fall bird walks in the River Gorge. He has generously offered to take out family groups of up to three people for one-hour informal warbler walks between April 25 and May 25, if all are willing to practice social distancing. The suggested minimum age of children is seven years old. Binoculars (and binocular skills) are helpful, but not necessary.

Dave Zumeta can be reached at dzumeta@comcast.net for questions or scheduling.

This is the first of three consecutive stories on Birds in the Mississippi River Gorge with local bird expert Dave Zumeta. Watch for Raptors in the June Messenger. These stories are meant especially for families with young children. If your child is interested in bird migration, look up the Blackpoll Warbler – an almost unbelievable long distance marathon flier.