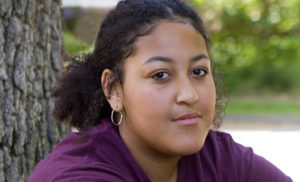 Kayleen Kabba will be going into 10th grade at South High School in the fall; if there is school, that is. She said, “The ‘not knowing’ about that feels big. There is a lot of ‘not knowing’ in my life right now.”

Like people of all ages, Kayleen is struggling to understand what’s going on around her. She said, “Some of my friends think the riots were fueled by the pandemic – that people were going crazy from being cooped up so long. The questions can start to spin around in your head. Why was tear gas used by police on peaceful protestors? Who are these people from out of state causing violence in our community? What is the media talking about? What is real?”

One thing is certain, as far as she’s concerned. Kayleen is glad that South High will no longer have police officers on-site. Minneapolis Public Schools has officially suspended their contract with the Minneapolis Police Department in the aftermath of George Floyd’s murder.

Kayleen had an exchange with a police officer last winter, the likes of which she thinks is pretty common. She explained, “My mom dropped me off late at school one morning. I was coming from a doctor’s appointment. When I checked in at the office, the attendance lady said, ‘There are only a couple minutes left of your first class; you can go stand at the door of your second class.’ So I started walking that direction.

“There was a group of 4-5 white kids in front of me in the hall. The school police officer smiled at them as they walked by, but he made me stop. He listened to my explanation, he checked my pass, and he said, ‘Don’t let me catch you out in the hallway again.’ He was not smiling. At the time it didn’t really register, but I felt the difference in the way he treated me was odd.

“We have to have some form of public safety in the schools and on the streets, but the priority should be de-escalation. So much of the time, authority figures don’t take the time to hear more than one side of the story. I really hope change is coming soon. I hope my generation will be the one to say, “This is IT. We’ve had enough.”