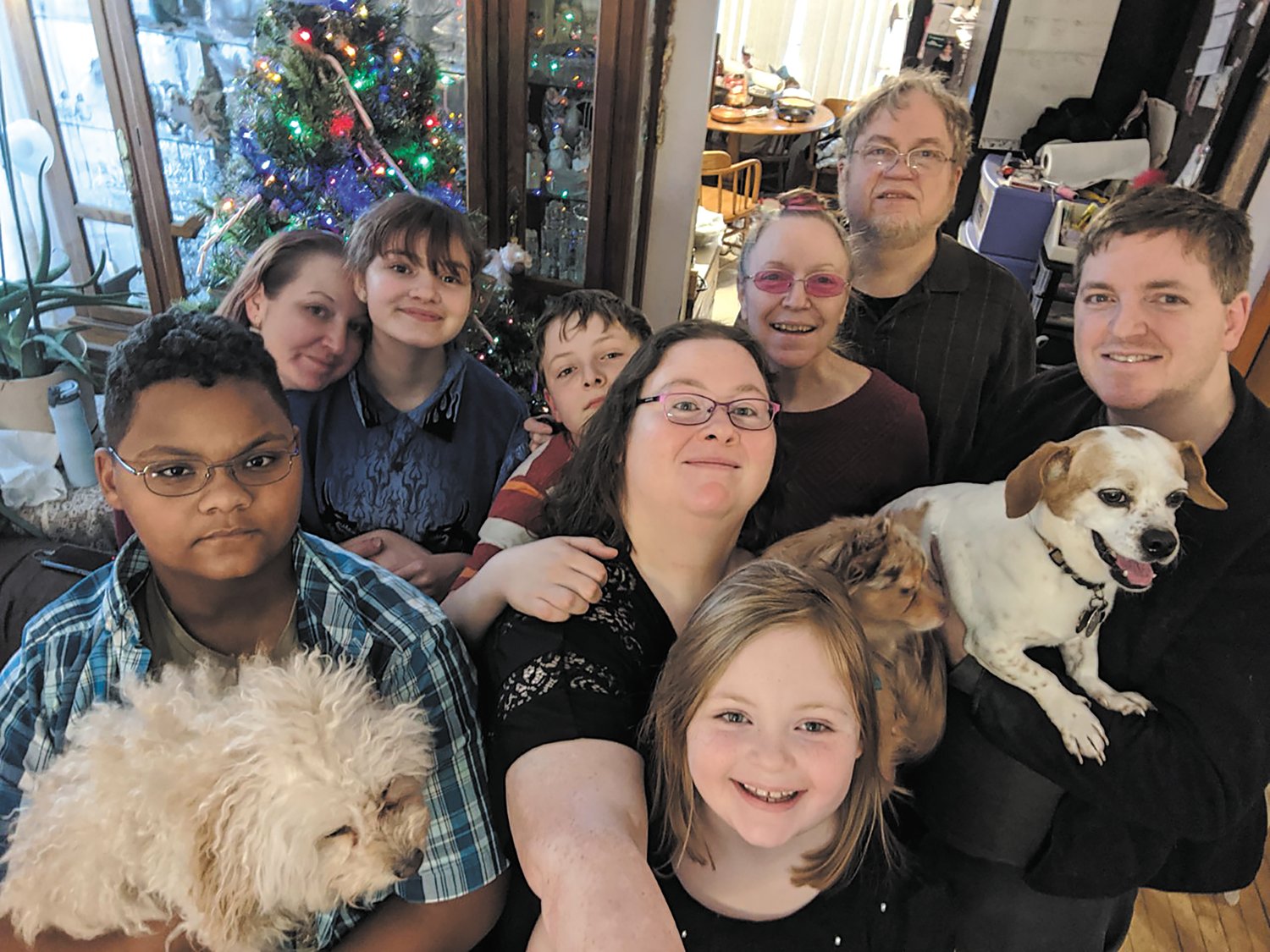 A Girard Christmas with parents Gerald "Teddy" and Terra, children Amanda and Tony (with his wife Lisa), and granchildren Loralei, 14, Greg, 16, Liam, 11, and Sonja, 8 (Photo submitted) 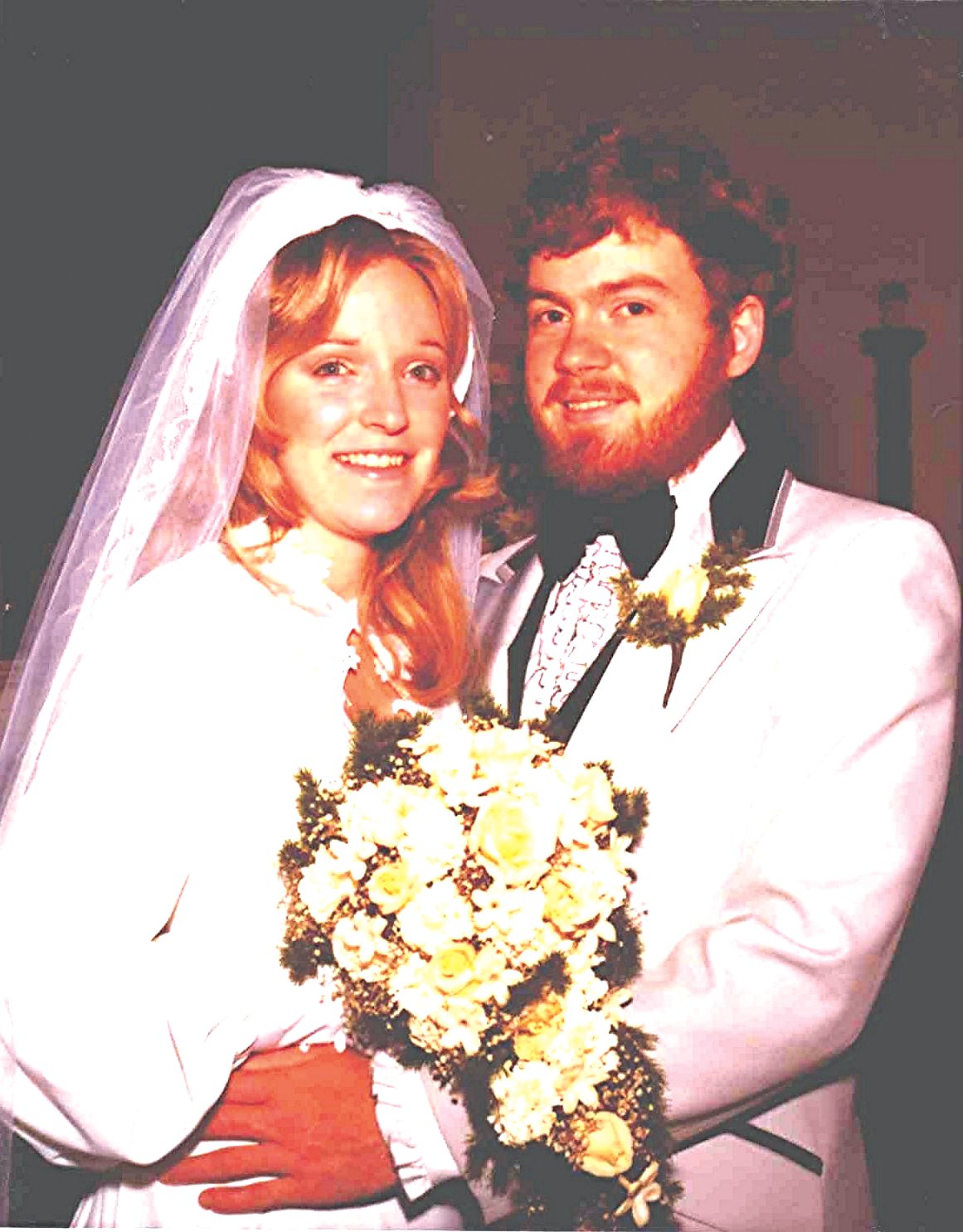 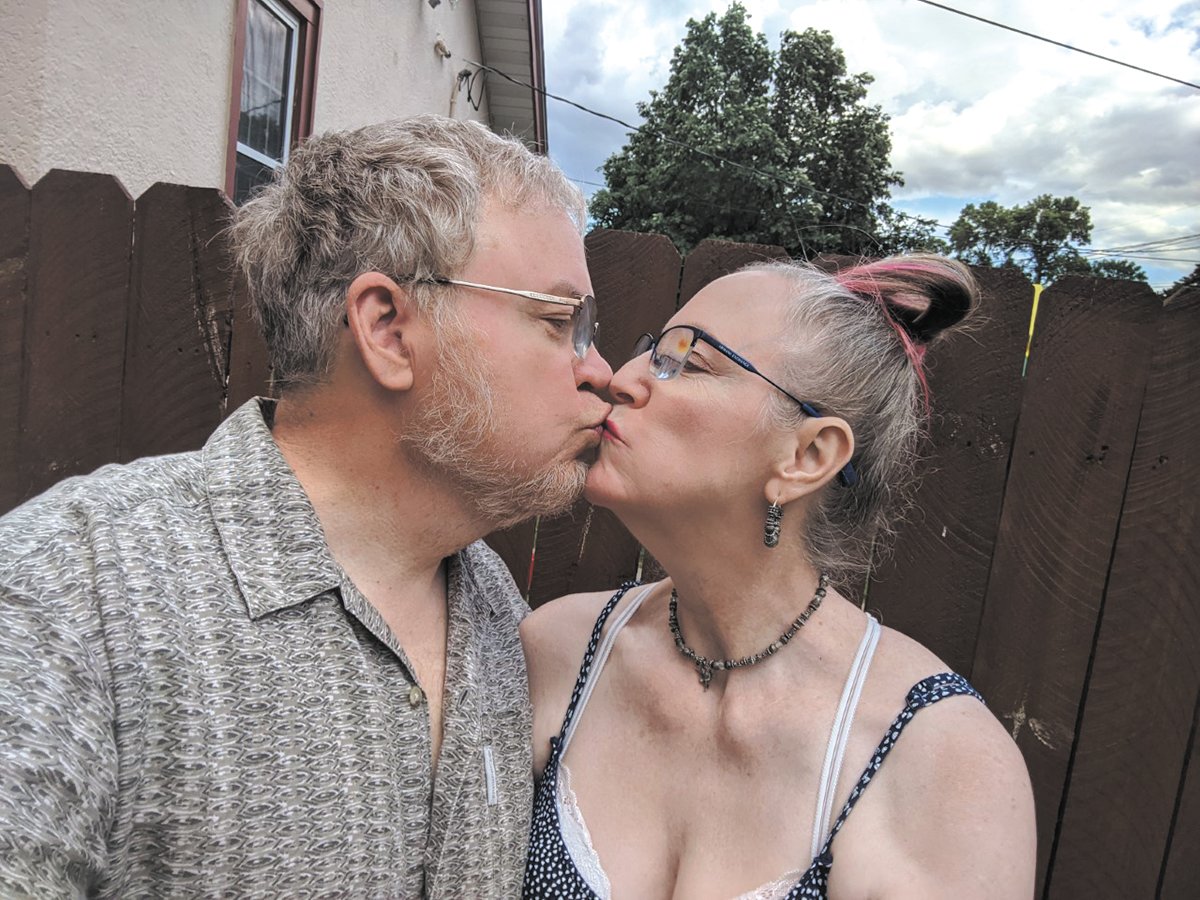 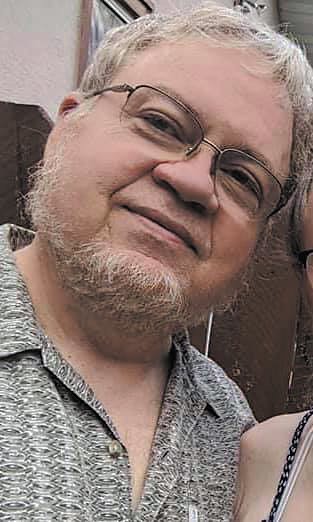 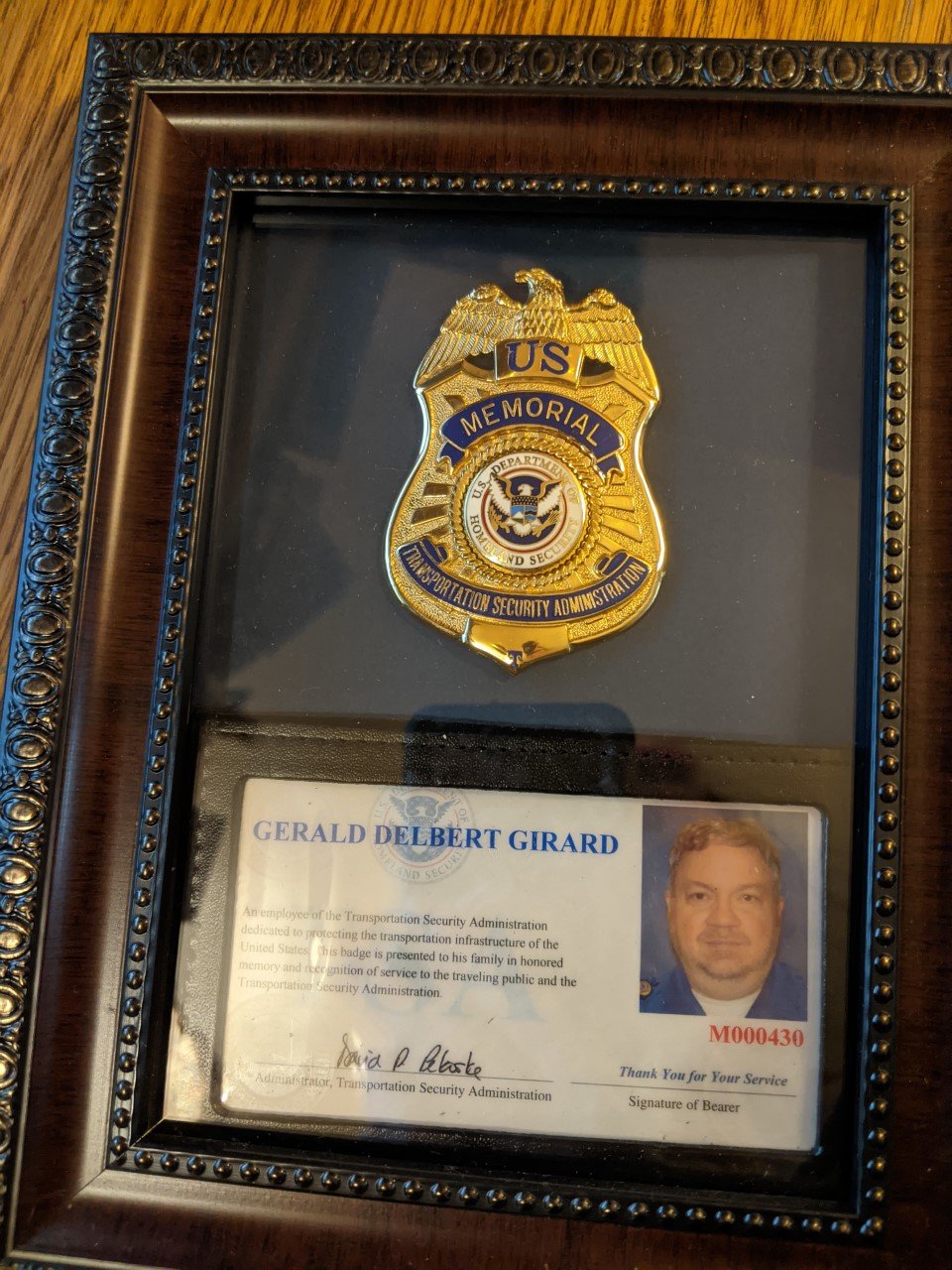 Terra Girard wasn’t planning to be a widow in her 60s. But things changed quickly in September when her husband Teddy got a sore throat and a cough, was hospitalized for COVID-19, and died nine days later on Tuesday, Oct. 13.
“When I try to look ahead, all I see is a deep, black hole where my future used to be bright,” said Terra.
“We were going to retire in a couple of years and travel. We were supposed to be one of those cute old couples, holding hands while we walked. We were planning what we wanted to do on our 65th wedding anniversary. I wasn’t supposed to have to be alone for the rest of my life.”

41 years of marriage
Gerald, known as ‘Teddy,’ and Terra met at a bar and knew they wanted to get married after a few months of dating. They enjoyed dancing and spending time together. They raised two children and have four grandchildren.
The couple celebrated their 41st wedding anniversary together earlier this year on June 23, 2020, in the same Longfellow home they’ve lived in since 1980.
“My husband was a kind, nurturing man, with rough hands that, when he touched my neck could calm me down in an instant. He had an amazing sense of humor. He had the kind of laugh that made people laugh with him,” recalled Terra.
“He was my knight in shining armor. He rescued me from abusive relationships into the kind of relationship every woman deserves. He was honest, reliable, stable and steady. I never had to worry about a roof over our heads, food on the table, clothes, etc. He deeply loved our children, Amanda and Tony. And even more deeply our grandchildren.
“He was a teddybear of a man – he loved to hug, and he could hug the tired, the angry, the depressed, right out of you.”

One of 9 TSA agents to die
When they first heard about COVID-19, they agreed that Terra would stop working as a PCA for her disabled sister because Terra has asthma and other co-morbidities. “Teddy was always so very healthy (rarely even caught a cold!), so he decided to continue working,” recalled Terra.
Teddy, age 67, had been working for the TSA at the Minneapolis/St. Paul airport since December 2007. He was part-time. Teddy was certified to conduct security screenings in the checkpoint areas at the airport, as well as TSA’s checked baggage operation.
“At the beginning, they were not allowed to wear any PPE (personal protection equipment), but that changed pretty quickly,” said Terra. “Also, at the beginning, he only worked one day every two weeks while the TSA was getting things figured out. Gradually they increased everyone’s hours until they were working their regular hours again.
“I believe Teddy got sick from his job at the airport. You can’t social distance and still do your job. I am positive that people traveled even when infected. Some of them probably were asymptomatic and didn’t know they were contagious,” said Terra.
Teddy is one of nine TSA agents who have died. As of Nov. 20, 3,020 TSA employees have tested positive for COVID-19.

It started like a cold, got worse
At home, they wore masks, practiced socially distancing, washed their hands constantly, and sanitized surfaces with special attention to door knobs and counters.
But in September, during the week of Sept. 24, Teddy developed a cough and sore throat. Terra wasn’t feeling well either, but both assumed it was bronchitis, which she often gets, and thought he had a cold.
On Oct. 1, her symptoms worsened. She had a fever, headache and diarrhea (which lasted for eight days).
On Saturday, Oct. 3, his symptoms got worse. His fever rose to 101 degrees, he was achy all over, he had a headache and he suffered from diarrhea.
“That was when we started thinking it was probably COVID-19,” said Terra. They scheduled a drive-through COVID-19 test for him on Tuesday, figuring if he tested positive she had it, too. “I again attempted to get him to go to the hospital, but he again refused. That night/early morning, he was severely sick. I insisted he go to the hospital. He wouldn’t let me call 911, so I drove him to Abbott-Northwestern. They took him right back, and wouldn’t let me stay, so I went home. They did the quick COVID-19 test on him, and it was positive. So the next day, I went in for a COVID19 test, which was also positive.”
She got calls from the hospital every 2-3 hours starting on Oct. 6. “They couldn’t stabilize him,” Terra remembered. They tried multiple ways of getting him more oxygen, including nose canellas, C-pap, Bi-pap, and full face mask with forced 15 pounds pressure of oxygen.
“At that time, we were still able to communicate with him, but he had to leave the oxygen mask on,” noted Terra. “He was in good spirits, making jokes. I realize now, that he was trying to not worry me. He must have been in pain, and lots of discomfort from coughing and being unable to catch a good breath. He worried about me the whole time. Every time the doctor or nurse called me, they asked me how I was doing, so they could tell him.”
Then his organs started shutting down.
“I started getting pretty worried, but we both still believed he would recover,” said Terra.
“He couldn’t swallow, so they had to put in a feeding tube. His only kidney shut down, so they had him on continuous dialysis. His lungs were half full of fluid, which it couldn’t clear. Then they put him on a ventilator, and had to put him into an induced coma (so that his body would tolerate the ventilator). From that time on, he was unable to communicate. This is when I started to get panicky. Then I got a call that during the switch onto the ventilator he had a heart attack. After a time on the ventilator, that was not working either, so they decided to put him on a machine called an ECMO. This machine would do the work of his heart, and of his lungs, so his body could fully rest.
“This is when the doctor first told me that he might not be able to recover.”

Saying goodbye
As they put him on the ECMO, he had two heart attacks. They brought him back, but two days later Terra got the call she had been dreading. During the heart attacks, he had a series of brain strokes, which had destroyed most of his brain function. If Teddy did recover from COVID-19, he would remain in a vegetative state.
She was finally allowed to see him to say goodbye.
“I held his hand, stroked his arm and his head, and told him how much I loved him. I told him not to worry about me, that I would be okay,” said Terra, who remains grateful they allowed her this rare “compassionate” visit. In a while, the doctor came in to talk to me. She said they couldn’t do CPR on him again, due to his brain damage, and that it was time for me to make a decision about what to do. She was very compassionate - they all were - and gave me as much time as I needed. So they let me go into a conference room, where I was able to contact Teddy’s siblings, our children and my sister. I told them each of what was happening, and they all agreed I should let him go.
“So I went back to the room and told them to let him go. Then the procedure was to have another doctor come and make sure his brain was not functioning before they took the ECMO off of him. I got to hold his hand and talk to him as this was all happening.
“That was probably the hardest thing I’ve ever had to do.”

Depressed, lonely – and angry
“Life without the love of my life is kind of like existing in a tunnel,” said Terra. “I know I have to get through the tunnel to get back home, but I’m extremely resistant because I know it will be incredibly painful and heart-breaking.
“Sometimes a random thought of Teddy will feel like a cannon ball just shot through my heart, and I can’t breathe.
“I’m learning every day of all the ways he took such great care of me. Like putting gas in my car, taking out the garbage, paying the bills, etc. We had a very reciprocal relationship and took care of each other.
“I miss him every day.”
She’s depressed and lonely – and angry.

‘Wear the mask’
“I feel strongly that our ‘leadership’ let us down, when it comes to COVID-19. I believe with all my heart that my husband did not have to catch it and die,” said Terra.
She’s been sharing her story to remind people why it is important to wear masks and stay home.
“I’m shocked and disgusted by how many people I still out and about not wearing masks. Why? Do they not read papers, watch TV or Google anything? COVID-19 is infecting and killing people all over the world, and especially in the U.S.
“Do you notice the old man standing within your sphere? How about the 25-year-old woman? Or the parents with their child? Any of those people could catch COVID-19 from you. And many others could get infected exponentially through you to others around you. Many will die. Many more will suffer permanent damage to their organs. Many will be asymptomatic and spread it to their family and/or friends.
“Maybe you think it’s not worth the hassle to wear a mask, because it’s not 100% effective. But think of it this way: Like condoms, masks are not 100% effective. But you use them anyway, for protection.
“Wear the mask.”