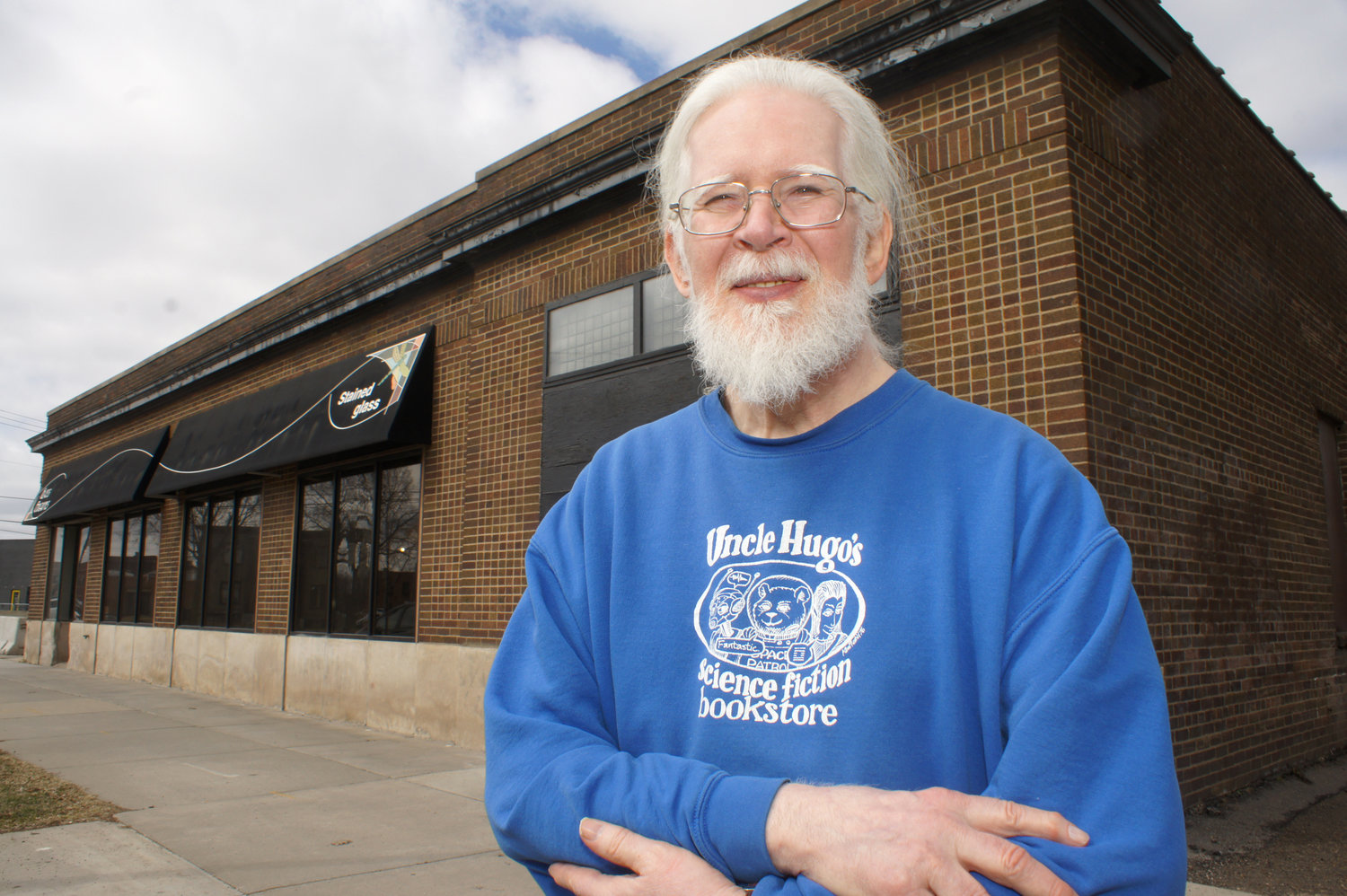 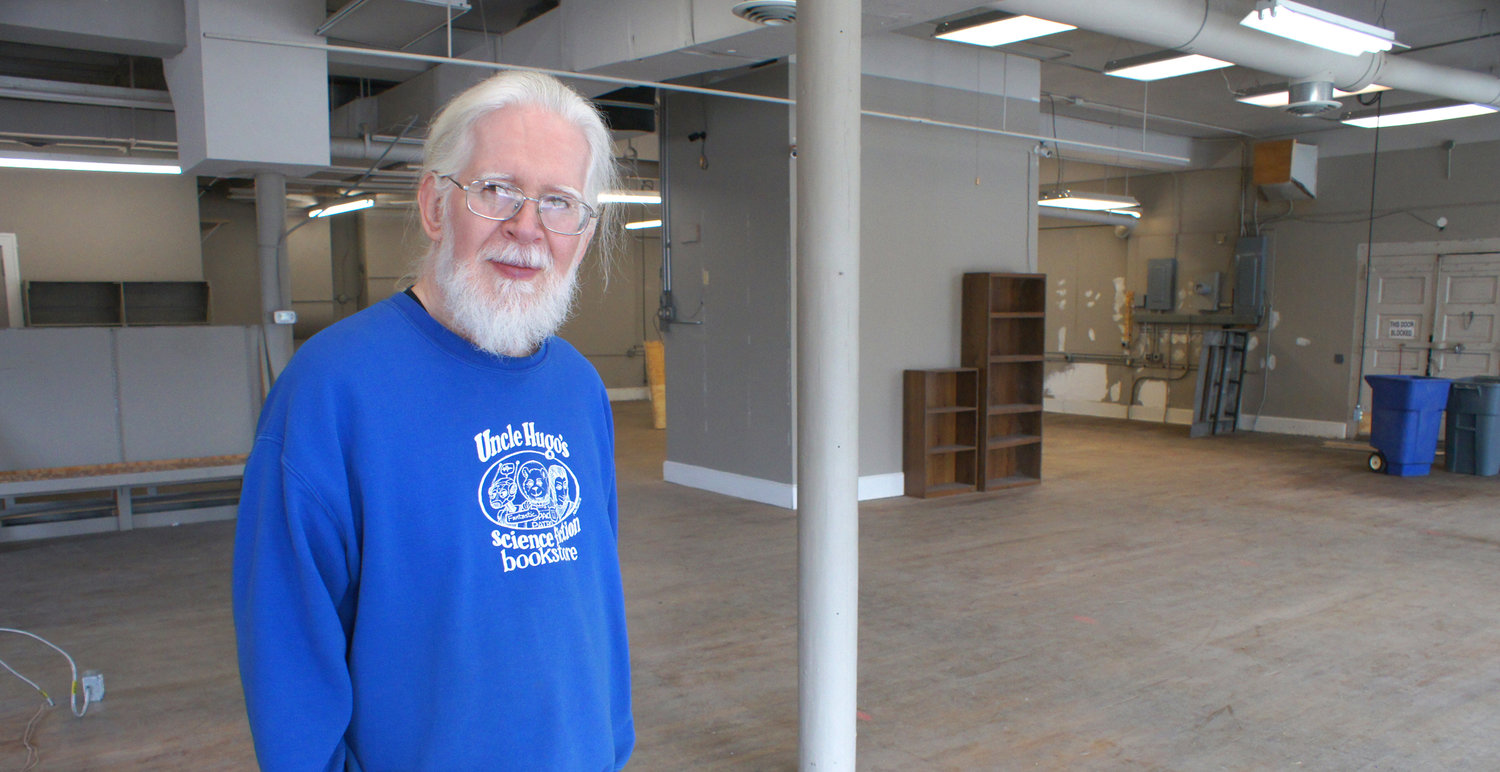 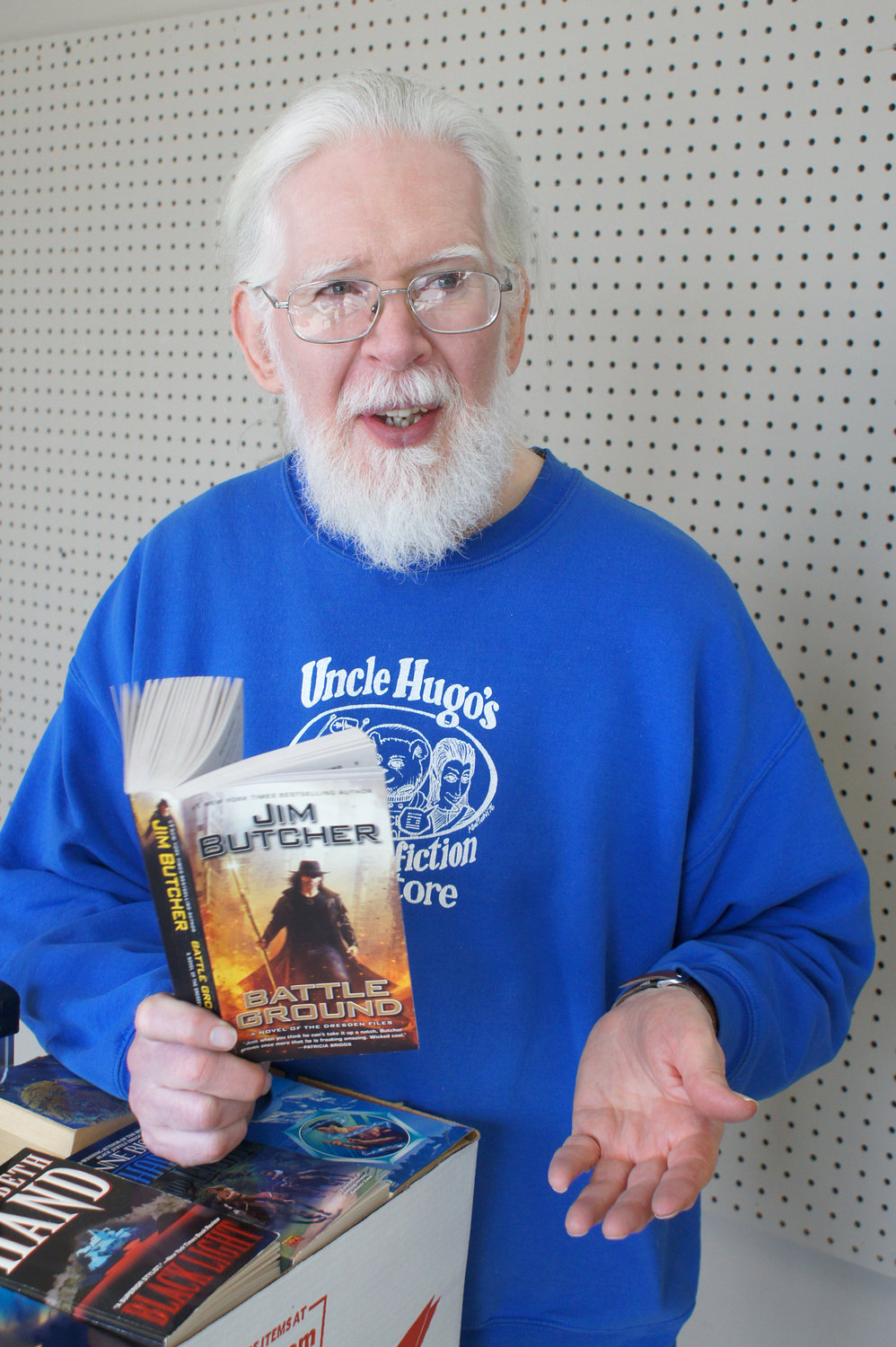 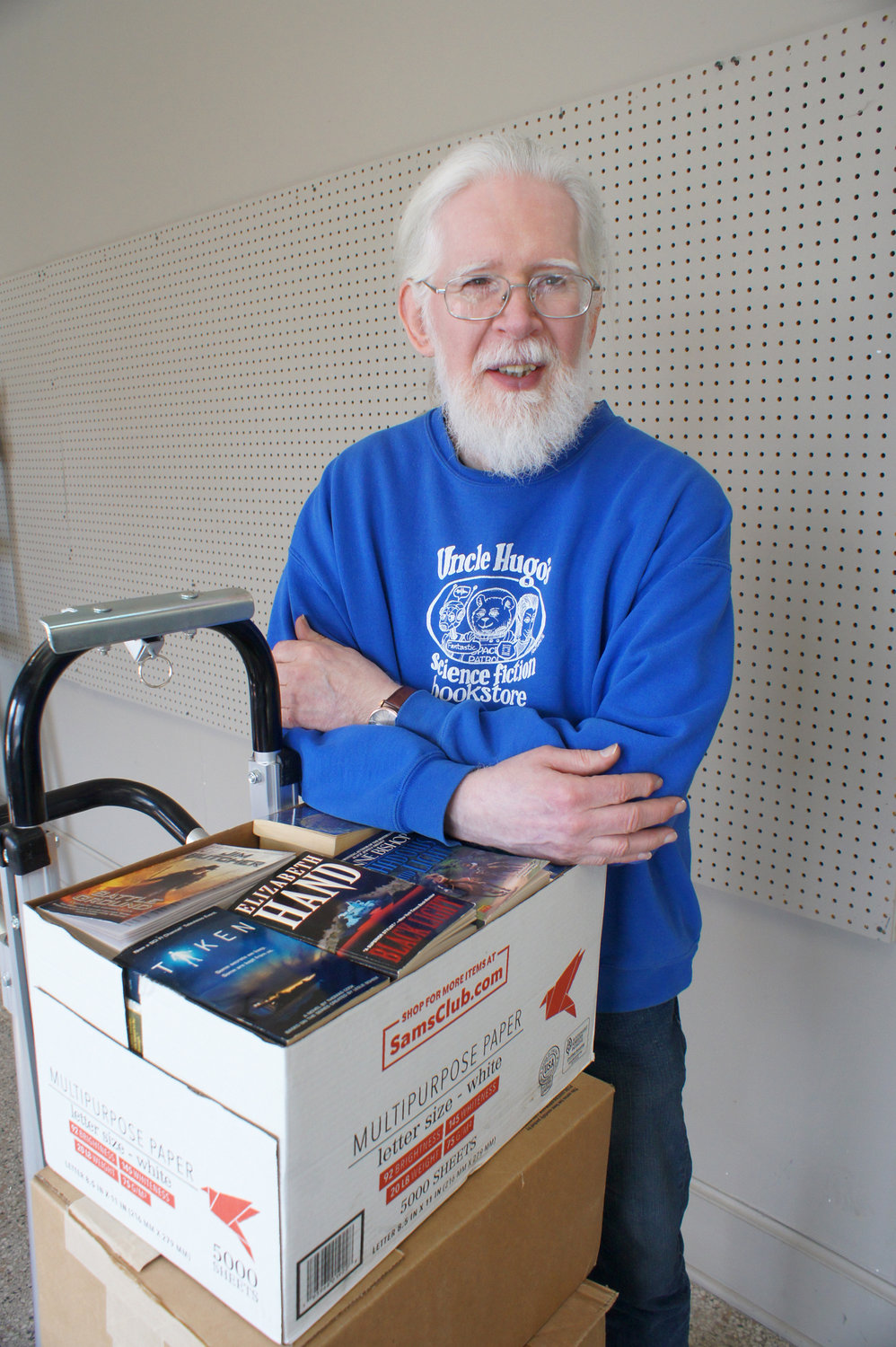 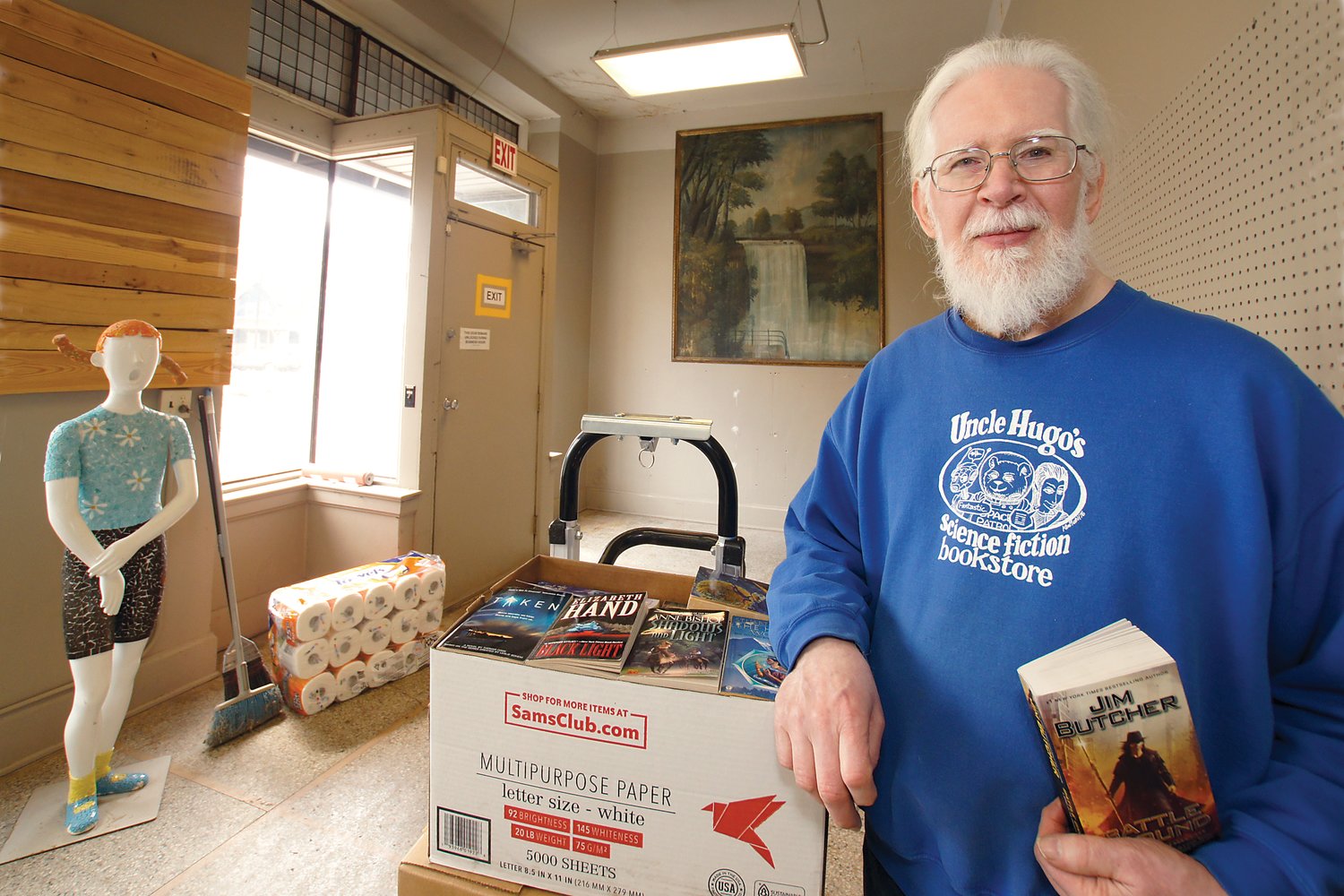 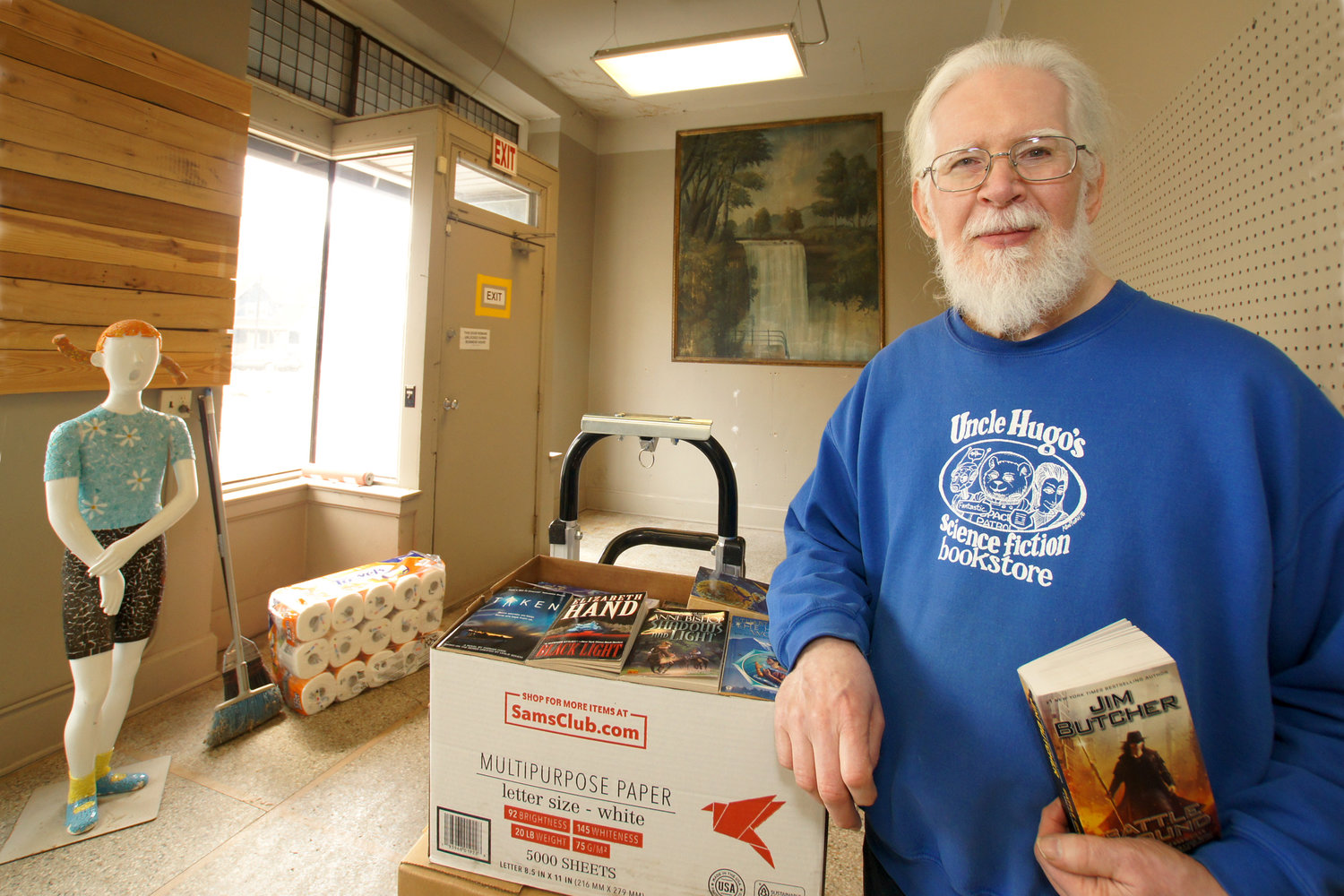 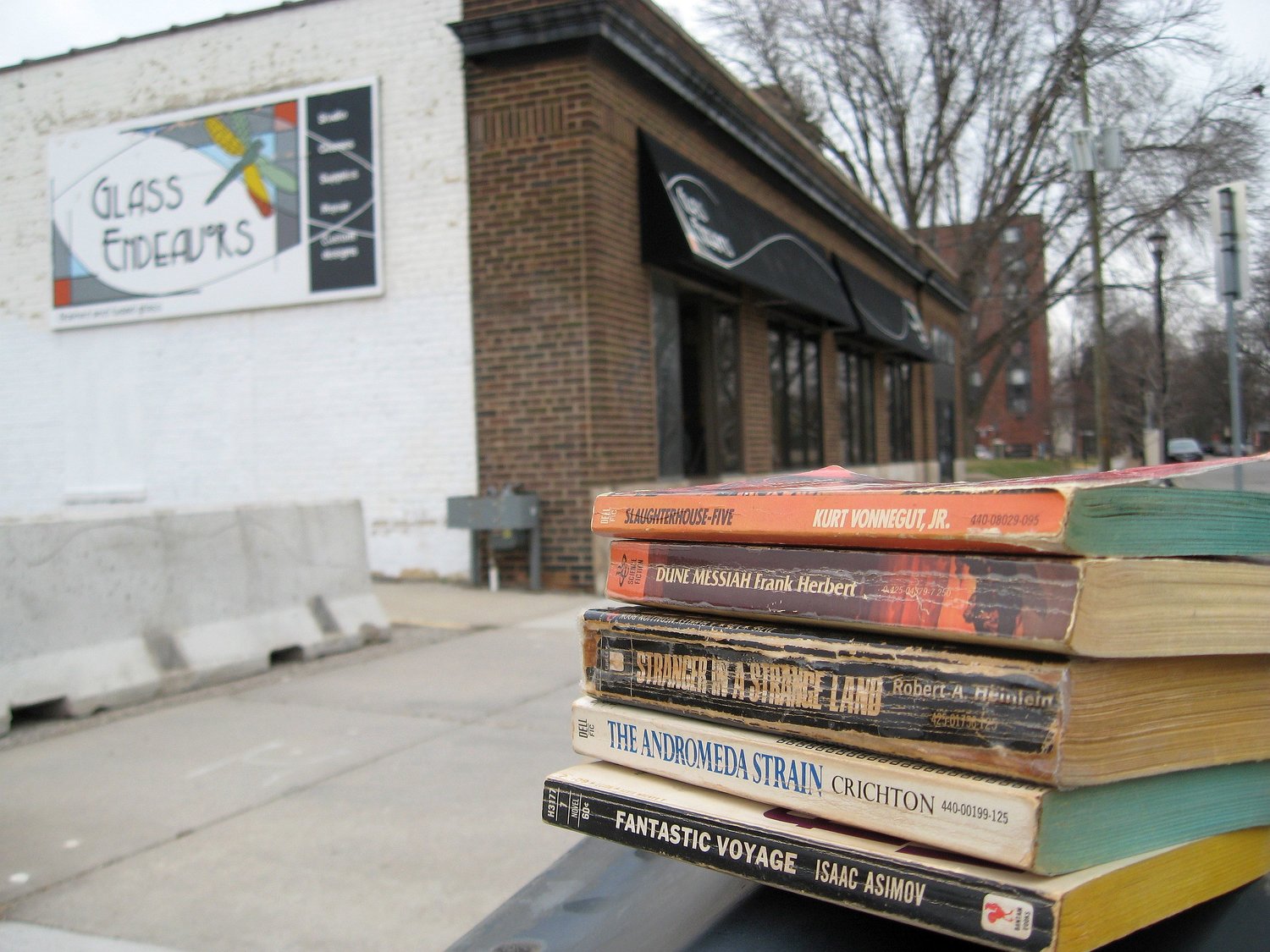 The civil unrest following George Floyd’s murder in 2020 delivered a double blow to Don Blyly, the longtime owner of the Chicago Avenue business with the double name: Uncle Edgar’s Mystery Book Store and Uncle Hugo's Science Fiction Book Store.
During those traumatic days in late May Blyly stood by, watching his store, a Chicago-Lake fixture for nearly 40 years, burn to the ground. Then came a bureaucratic snafu in city hall that blocked him, at least temporarily, from clearing the charred remains of his business.
Now, two years later, Blyly’s store, known collectively as the Uncles, has found a new home in the former Glass Endeavors building at 31st and Minnehaha. It is the only building on that block that wasn’t destroyed in May 2020. Blyly is using insurance proceeds and a grant from the Lake Street Council to restart the Uncles. Blyly had expected to relocate in Richfield or another close-in suburb to serve his long-time customers, half of whom live outside the 394-694 ring. “Some of them may be unsure about coming into the city to do their shopping, but this in-town property was a perfect fit for me, so I decided to give Minneapolis another chance,” he explained.

BOOK STORE TO REOPEN IN JUNE
These days, the long-time local bookseller is busy working with contractors to renovate the Lake Street area building, dating to 1924 when it was built to house the original East Lake Post Office. Once the wooden floors of the 96-year-old building are refinished, Blyly will start installing the shelves that will hold his rebuilt science fiction and mystery collection.
Blyly estimates that he lost about a million dollars in inventory during the 2020 fire that destroyed his Chicago Avenue building, but he was able to preserve his personal collection of about 20,000 books that were stored in his south Minneapolis home. Blyly has spent the last two years selling off his personal collection to generate the cash flow needed to restart his business. He is hoping to reopen the Uncles sometime in June.

FROM LAW SCHOOL TO BOOK SALES
The store’s proprietor, who started reading science fiction in the third grade, came to Minneapolis in the early 1970s to attend law school.
“I was bored out of my mind reading constitutional law, and I decided that I wanted to do something fun with my life,” he recalled.
Given his passion for science fiction, Blyly started looking for a job in a book store specializing in that field. When no one would hire him, he decided to open his own store. “All the pieces came together, and within a few weeks I opened for business,” he recalled. “I found a wholesaler who was willing to provide the book shelves for free if I bought the books. The same landlord I was renting my apartment from had this very small space just a block from my apartment building. He was willing to rent that space to me for $50 a month.
Blyly opened his first store in 1974 in the building on 4th Avenue, now occupied by the Electric Fetus. In 1980, he added mystery titles. Four years later, he moved to Chicago Avenue. Initially, his new building consisted of adjoining store fronts separated by a common wall, so he devoted one space to mysteries and the other to science fiction. Uncle Edgar’s was named for the famous American writer Edgar Allen Poe, considered the father of the modern mystery. Uncle Hugo’s was a reference to the less well-known Hugo Gernsback, an early 20th century inventor and magazine publisher who helped popularize science fiction.
“It was all one business,” Blyly explained. “But, because we had two store fronts, we were able to have two phone numbers. People could call Uncle Edgar’s if they were looking for a mystery, or they could call Uncle Hugo’s if they were looking science fiction. That way, it took less time for us to help customers find the books they wanted.”

‘ONE OF THE WORLD’S BEST COLLECTIONS’
Blyly will keep both names on his new store, but it will be organized as one space, with separate shelves for each genre. In a nod to the building’s history, he will retain a small stained glass dragonfly embedded in the store’s entryway, along with a WPA mural depicting Minnehaha Falls, created for the post office.
The Uncles' owner realizes that he is bucking a trend by opening a stand-alone retail business in 2022, but he maintains that bricks and mortar book stores still have a role to play during the current digital age. “You can do browsing easier in a physical book store – particularly if it is well curated. Right now, there are about a half million new books each year that are self-published. Most of those books are self-published because no self-respecting publisher would publish them. You have to dig through all of them to find a smaller sub-set of books that are worth reading. If you go to a store like ours, you can also get advice from other shoppers.”
The new Uncles will be located just a block away from another well-known south Minneapolis bookstore, Moon Palace. Blyly thinks that both businesses will be benefit from their proximity to one another. “We each have our own customer base, but we are hoping that people who come to Moon Palace will wander across Minnehaha Avenue to our store, and our folks will cross the street to browse at Moon Palace.”
Jon Marble, a longtime Uncle Hugo’s customer, is looking forward to the opening of Blyly’s new store in June. “That’s great news for science fiction fans like me. It may be hard to believe, but right here in south Minneapolis we will have one of the world’s best collections of new and used science fiction books. I am looking forward to bringing in the books I have just finished reading, and trading them in for a new set at Uncle Hugo’s.