Hook and Ladder brings back live shows to Lake and Minnehaha 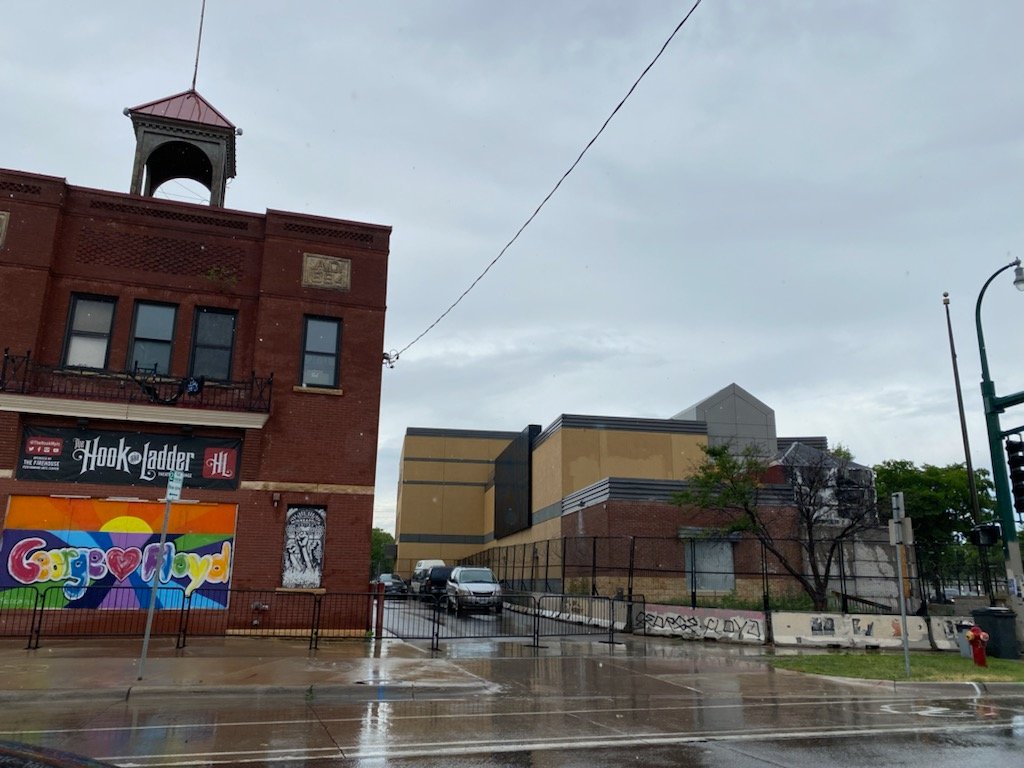 The Hook and Ladder is located next to the Third Precinct. (Photo by Tesha M. Christensen) 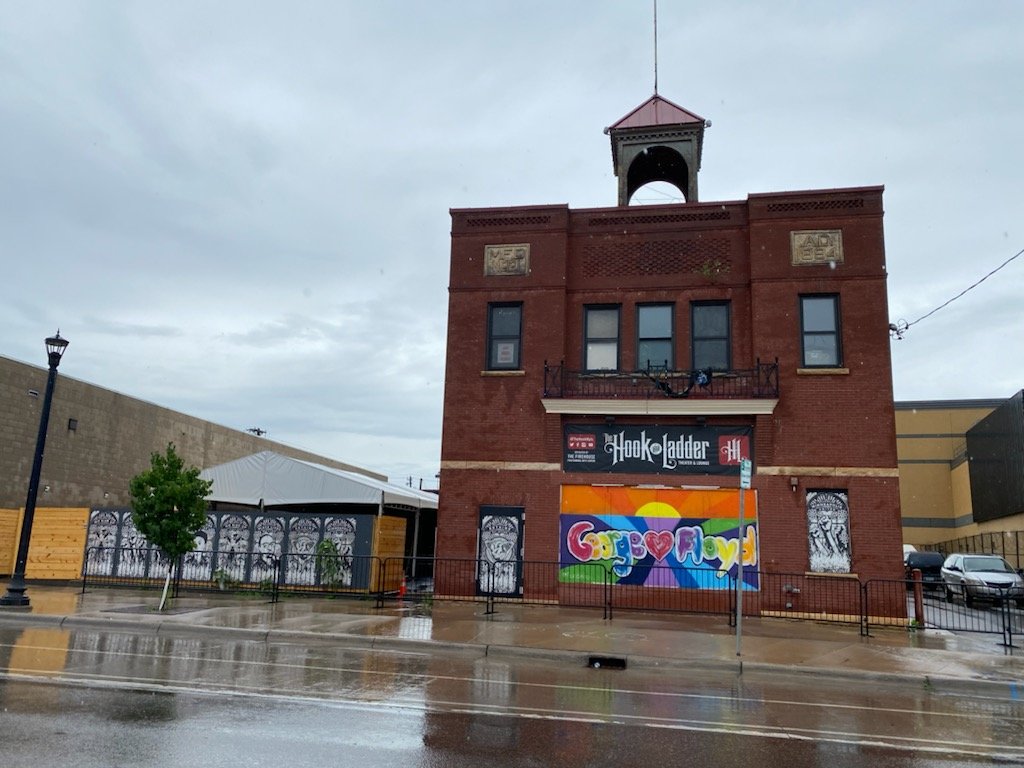 The Hook and Ladder is located inside an old fire station. (Photo by Tesha M. Christensen) 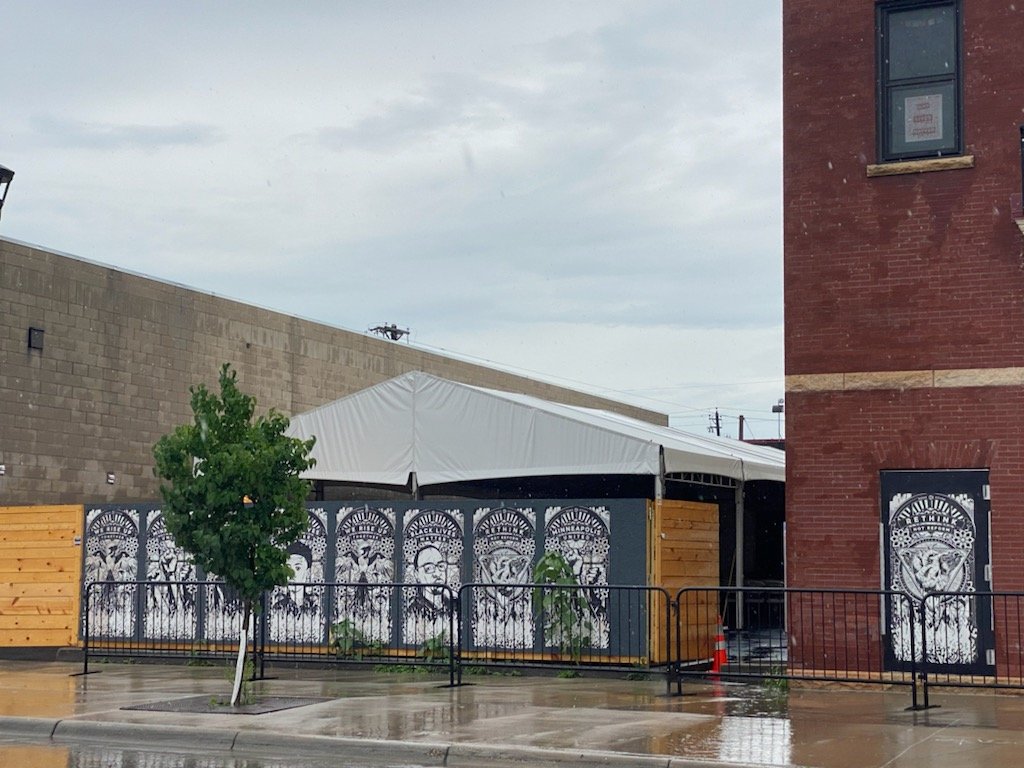 The Hook and Ladder is holding shows Under the canopy this summer. (Photo by Tesha M. Christensen)
Previous Next
Posted Wednesday, June 30, 2021 9:40 pm
By TESHA M. CHRISTENSEN

Live shows are back at the Hook and Ladder Theater & Lounge inside the old Firehouse 21 building at East Lake St. and Minnehaha Ave.
This summer, concerts are taking place under the canopy set up in the courtyard between buildings.
Shows will return to the 300-seat indoor theater and casual Mission Room on Oct. 8.

Pivoting to survive
Surviving a pandemic that shuttered entertainment venues coupled with damage to their building and neighborhood during the protests after the murder of George Floyd required the Firehouse Performing Arts Center (the non-profit arts organization that operates The Hook & Ladder Theater and Mission Room) to pivot.
The Hook was sustained by two PPP loans. They’re still waiting for the Save Our Stages (SVOG) emergency funding. It’s been stressful to wait for the relief funds, according to Marketing Director and Talent Buyer Jesse Brodd. “Thank goodness we had come up with the idea of Under the Canopy,” he observed.
With an average of three shows a week from April to the start of October, the series will offer about 60 events. This includes the return of the three-day Roots Rock Deep Blues Festival July 15-17.
A key part of the Under the Canopy shows are the safety pods. With a maximum of 184 people at each show, folks buy tickets of two, four or six together, arrive together, and sit together. Tables are positioned six feet apart. The Mission Room has become the backstage.
The Hook offers music lovers a way to support their operations through Club 21 Patreon memberships. Ranging from $10 to $75 a month, perks include early ticket access, behind-the-scenes content, discounts, and digital content.
As other entertainment venues did, the Hook pivoted from live shows to streaming. Within a few months of the March 2020 shutdown they had wired the auditorium to offer multiple camera angles.
Brodd anticipates that the Hook will continue to stream shows, in part because their audience expanded outside Minneapolis during the pandemic. Plus, it is convenient for folks when the weather is bad.
They’re taking a break this summer from doing many HookStreams while folks are excited to be able to attend events in person. This will give them time to create an operations center upstairs that can be efficiently run by one person. Then the performers will also get added value through videos of their shows.
They have the ability to stream the shows throughout the building now, so people who want to talk and drink during performances can sit in the Mission Room.

Damage and reopening
Despite its location next to the Third Precinct, the Hook and Ladder didn’t burn down like many other nearby businesses during the protests following George Floyd’s murder.
Brodd credits that, in part, to the tireless work of Moon Palace/Geek Love Cafe owner Jamie Schwesnedel and others, who watched over the buildings on the block night after night.
A fire was started in the back hall between the theater and Mission Room, but it didn’t spread to the rest of the building, thanks to the two-inch-thick fire proof doors they had installed to bring the building up to code. The robust sprinkler system kept anyone from lingering in the building. “Everything in the Mission Room and theater was safe, aside from smoke damage,” said Brodd. A few windows were broken, but they felt blessed the aged wood floors and stage survived. The majority of the damage was covered by insurance.
Less than a month after George Floyd’s death, the Hook returned with the June 20, 2020 show by Davina & the Vagabonds. It was particularly poignant as band members Davina and Zack Lozier live just three blocks away.
Not all of the musical acts who previously performed at the Hook survived the pandemic. Some collected unemployment and others hung up their instruments to take different jobs. Many put their staff on furlough.
Some bands dissolved, and others haven’t practiced in months. Many couldn’t afford rehearsal space without any accompanying gigs. As he books shows now, Brodd is getting requests for practice time before the performance.
But there have also been artists who wrote new music and came out with new albums.

What’s coming next?
As property and business owners around them make plans, one big question remains unanswered. What is the city going to do with the Third Precinct site?
Right now, shoppers and concert attendees are using the parking lot behind the Third Precinct as a community lot.
Ample parking is important to the vibrancy of the area, according to Brodd, and he hopes that is taken into account when the city evaluates what to do with the Third Precinct site moving forward. “We need that parking lot for the community more than the police need it for their guns,” he stated. He suggested a few options, including a shared ground-level space for police and community or a multi-level parking garage.
“We were all in survival mode during the fires and COVID-19 and now its up to us to set the standard for how to move forward,” Brodd said.