On the Midtown Greenway at 27th Ave., a foliage-clad structure known as the Ivy Building was caught up in the violent protests that swept through the East Lake corridor following George Floyd’s murder. The artists and small businesses that occupied the historic building were forced to vacate when the building caught fire on May 28, 2020.

During the height of the Great Depression more than 80 years ago, that same corner of 27th Ave. and 27th St. was the site of another violent protest that rocked South Minneapolis for three nights in September 1935.

In 1935, the Ivy Building was the home of the Flour City Ornamental Iron Works, a metal fabricating business owned by Walter Tetzlaff. That year, the fiercely anti-union Tetzlaff had faced off against a Minneapolis labor organization, the Ornamental Iron Workers Local 1313, that was working to organize his plant. A year earlier, Minneapolis’s beleaguered labor movement had scored a major victory. The victory came when the Teamsters union was able to win major concessions from of group of local trucking companies after a bloody summer-long strike. 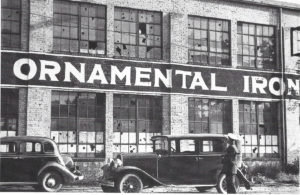 During the height of the Great Depression, the Ivy Building at the corner of 27th St. and 27th Ave. was home to Flour City Ornamental Iron Works. It was the site of a three-day protest by the iron workers union. By the end, two were shot to death and 28 injured. The same building was damaged by fire in the May 2020 protests over the murder of George Floyd by police officers in South Minneapolis.

With an emboldened labor movement follow the settlement of the truckers strike, Walter Tetzlaff found himself on the defensive as he pushed back against Local 1313’s demands. When Tetzlaff refused to bargain with the union, Local 1313 called his workers out on strike on July 11. At first, Tetzlaff tried to keep Flour City open with a nonunion crew. But faced with a hostile crowd of labor sympathizers who surrounded the plant night after night, he backed down, at least temporarily, and closed the factory on July 28.

Later in the week, a small contingent of Tetzlaff’s non-striking workers met with Minneapolis Mayor Thomas Latimer and told him that they wanted to go back to work. Latimer assured the group’s leaders that they would get ample police protection if the plant reopened. On Friday, July 31, a few of the men were able to get through picket lines with the help of about 50 Minneapolis policemen. That night, as they were leaving the plant, a crowd of nearly 1,000 union sympathizers stoned the strikebreakers. Tetzlaff closed the plant again but obtained a court order a month later which enabled him to keep a skeleton crew of armed guards inside the plant.

Tetzlaff’s ploy only succeeded in further enraging the strikers who surrounded the plant for days at a time. “Each night the singing and shouting crowd passed in front of the plant,” the pro-business Minneapolis Tribune reported, “missiles were hurled through windows. The crush of broken glass sounded above the imprecations shouted at the workers housed inside the plant.”

By Sept. 10, the crowd had swelled to more than 5,000. Just before midnight on the 10th, the police charged with tear gas to disperse the strikers and their supporters. “Firing over their heads, “ the Tribune recounted, “the police drove the protesters and spectators, including women and children, down alleys and between buildings. In the charge, the police did not distinguish between picketers and spectators.”

Two killed on Sept. 11, both sides blame other

The next night, on Sept. 11, the picketers were back in force and so were the police. At about 11 p.m., a local police official gave the order to disperse the crowd. “Armored cars roared into action, “ the Tribune reported. “Up and down 27th Avenue they went, laying down a barrage of tear gas. The crowd scattered. It seemed for a moment that the crisis had passed. But then a new group of strikers rushed up to the plant and shouted to the crowd not to turn back.”

“Just after 11, the first shots were fired,” the Tribune told its readers. “The picketers scurried for cover as the police advanced, clearing 27th Ave. Then the battled settled into guerrilla warfare. Members of the mob dodged in and out between the houses, peppering away at the police and the plant with rocks and stones. Rifle bullets whizzed through the street and fire poured into the police line from a vacant field near the railroad tracks.”

Two hours later, the battle was over. Twenty-eight people had been wounded. Two bystanders, 21-year-old Melvin Bjorkland and 18-year-old Eugene Cooper, had been killed in the cross fire. Bjorkland happened to be walking through the neighborhood surrounding the plant after attending a church social when he was killed. Cooper was standing on the sidelines watching the battle when he was shot in the chest.

After the shooting had stopped, the police claimed that a group of picketers armed with rifles had fired on them, a charge vigorously denied by union leaders. Later in the month, a story in the Minneapolis Labor Review reported that the first shots were fired from within the plant by Tetzlaff’s armed guards. “It is known that 20 of the 26 inside the plant were private detectives brought into the plant,“ the Labor Review maintained. “There is only one conclusion that can be reached, that they were brought in deliberately with the idea of fomenting strife.”

In the end, neither side was able to prove its case. The source of the bullets that killed Bjorkland and Cooper was never determined.

Then, almost as quickly as it started, the strike at Flour City Ornamental Iron was settled when Tetzlaff and the heads of eight other iron working firms agreed to Local 1313’s demands. On Sept. 21, both side signed an agreement which enabled strikers workers to go back to work. The agreement established a 40-hour work week and gave workers a small, but significant wage increase.

In later years, Minneapolis’s labor movement would celebrate more wins and suffer more defeats. But the battles of the mid-1930s, including the one at the Flour City Ornamental Iron Works, would succeed in breaking the tight hold of Minneapolis’s anti-labor organizations on this city’s economic life.