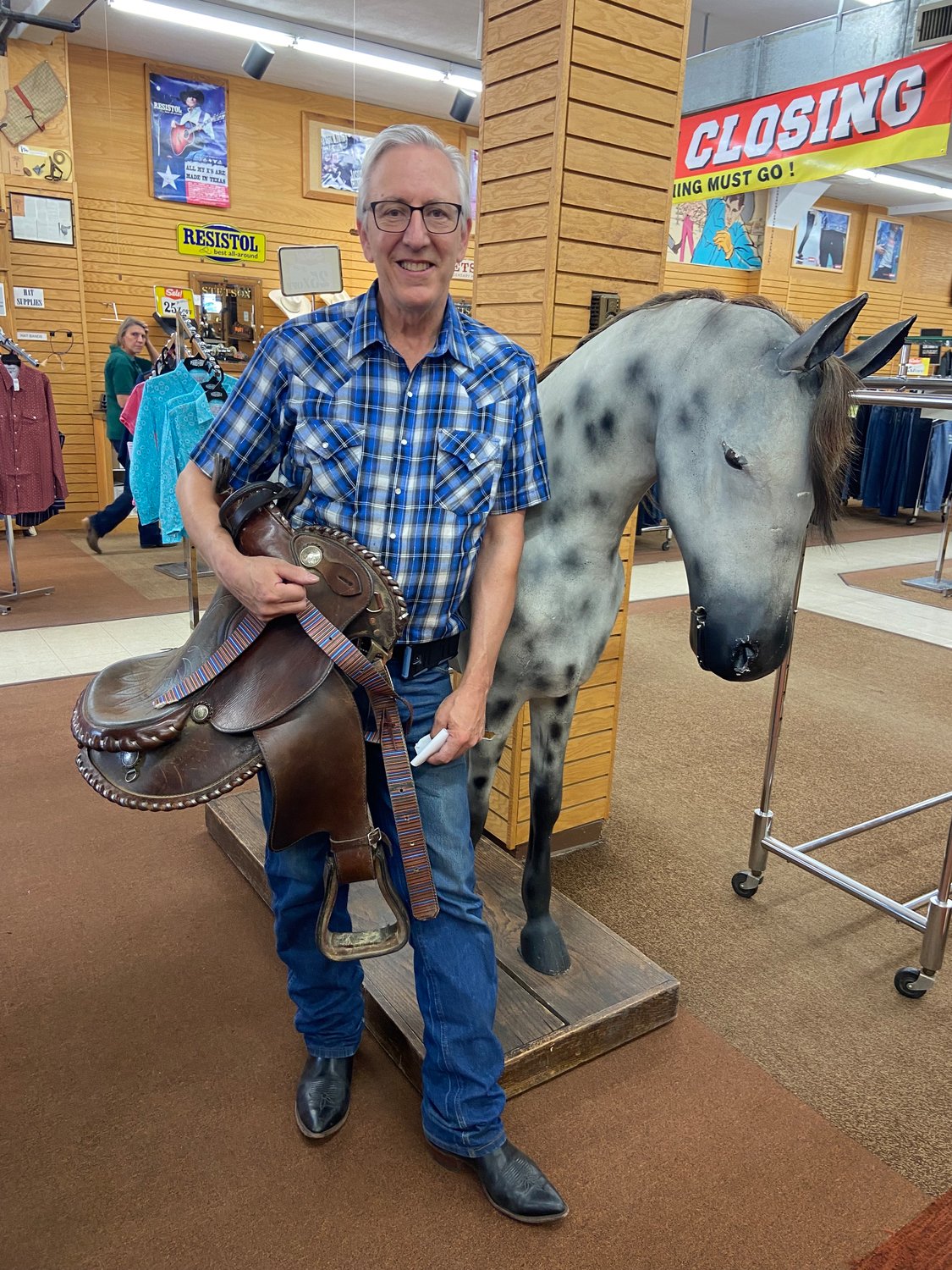 Gary Schatzlein stands in Schatzlein’s Saddle Shop at 413 W Lake St., holding a saddle that needs to be repaired. “It has been hard to compete with online shopping,” Gary Schatzlein said. “Brands have made it harder for us to buy from them.” The horse behind him is one customers used to sit on and see if their apparel fit right. Now, the horse displays a “Do Not Touch” sign
Chloe Peter
Posted Wednesday, September 21, 2022 5:32 pm
Chloe Peter

Before Lake Street was a popular hub of Minneapolis, it was a rural area where farming was prevalent. There were rarely any streetcars or buses that rode up and down the street, but rather, horses and buggies.

“Being in business for 115 years is no easy feat,” said Joan Schatzlein West, one of the four siblings that work at Schatzlein Saddle Shop (413 W. Lake St.). “If we have learned anything in all these years, it’s to be flexible and to change with the times.”

Throughout the years, Schatzlein’s has remained a family-owned business. In 1927, Emil Schatzlein took a picture of his son, Ed, standing next to a miniature handmade horse, saddle, and bridle and that is still the picture that the shop uses in its advertisements. At one time, six siblings worked in the shop together, but two have since retired.

As the city grew south toward what was once a rural Lake Street, horses were replaced with streetcars and buses. People who rode horses still patronized the store, but to remain in business, the shop added Western and English wear in the 1950s. In 1957, the shop become one of the first in Minnesota to sell original 501 Shrink-to-Fit Levi Jeans. These were incredibly popular at the time as one could shrink raw denim to fit their unique body type.

As the apparel expanded to boots, shirts, Lee, Levi, Wrangler, jeans, and accessories, the store outgrew the space and moved across the alley to the present location.

“We are a unique business in the city of Minneapolis,” Schatzlein West said. “Our customers are far reaching as to age, hobbies, and careers.”

On Aug. 28, Schatzlein Saddle Shop posted an announcement to their social media pages that said they would be closing the shop and retiring. They began liquidating the store immediately.

A portion of the post stated, “Schatzlein’s has been doing business on Lake Street for 115 years and now is the time for some of the family members to retire. It’s been an incredible ride. Ultimately, we would love to stay open, but at this time it is not possible. What’s carried us on so long are all of our valued and loyal customers who have shopped at Schatzlein’s for so long.”

Some of their customers have been coming in for years. Parents and grandparents brought them in and now they bring in their own children. Schatzlein West mentioned how fun it was to continue seeing them all and called them “like family.” On Sept. 6, 2022, there were customers in the shop who expressed the same feelings as Schatzlein West. One woman had brought in a saddle for repair and didn’t know where she would go for repairs in the future. Another couple stood at the front desk, talking about the times they had visited the store in the past.

CHANGES IN THE SUPPLY CHAIN

Gary Schatzlein, who has worked at the saddle shop for more than 60 years, expressed how much has changed since he started working.

“I remember when I first started working and Levi’s jeans were just over $4 a pair, and now they’re $69.50,” Schatzlein said.

More than that has changed in the past 115 years including online shopping. G. Schatzlein said that they just can’t compete with companies selling their own products online. While Schatzlein Saddle Shop does have its own online store, it has to pay more for products.

“That’s why we don’t sell Minnetonka Moccasin,” Schatzlein said. “Our prices are higher because we have to pay for shipping to our store, so customers will come in just to try on their size but buy them online at the Minnetonka Moccasin store.”

The supply chain and age are what Schatzlein attributes to being ready to retire. They aren’t hosting a “big sendoff” or retirement party, but rather, having customers come in, share their experiences, and participate in the liquidation sale. Schatzlein did not give a specific date of the store’s closing, but said that it would be soon as the saddle shop was emptied out.