News for everyone, delivered to everyone
ELECTIONS 2021

Why should you care about city elections? 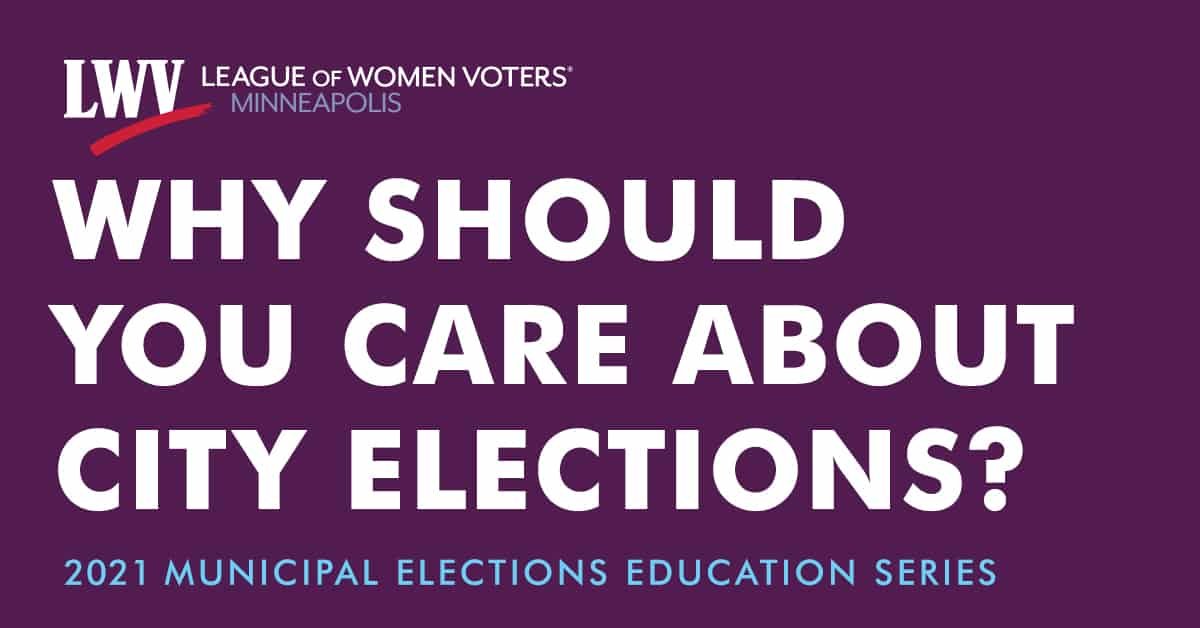 If you drive a car, walk, bicycle, live in a house or apartment, have a pet, discard trash, flush the toilet, or breathe the air in the city of Minneapolis, you have a vested interest in who runs our city.  If your concern is safety, policing, and civil rights, your interests are even more relevant this year.

City council members — one elected from each of Minneapolis’ 13 wards — make the laws and policies that govern the city.  They approve budgets, levy taxes and elect a council president who sets the council’s agenda and presides over meetings.  Council members serve on committees that focus on specific issues like public health & safety, housing & zoning, public works and budgeting.

The city council writes the rules that govern nearly every aspect of the city that impacts our daily lives.  To read more about the council’s powers and duties, visit the City of Minneapolis’ website here.

Reminder: every city council seat, as well as the mayor, will be on the ballot on November 2!

The mayor is the only city official elected at-large — that is, by the entire city’s voting population.  Think of the mayor as the city’s chief executive, responsible for the day-to-day operations of the city and cheerleader-in-chief.  The mayor is the most recognizable city official and acts as the city’s figurehead and spokesperson.  That enables the mayor to set the city’s agenda and wield the bully pulpit.  Where city council members typically represent their individual communities, mayors have a broader city-wide perspective.

In Minneapolis’ “weak mayor” system, the mayor appoints commissioners and directors of the various city departments and oversees their work.  The city council’s Executive Committee, however, also plays a role in appointments and oversight.  While this forces collaboration and democratizes decisions, it can lead to role confusion and unclear expectations by staff.  Accountability is also shared, which may confound voters as to where the buck stops.

What is NOT controlled by city government: schools and parks.  Both have separate boards that set policy and budgets.  Future installments in this series will explain the roles of the Board of Estimate & Taxation and the Minneapolis Park & Recreation Board (elected offices).  You’ll see both of these entities show up on the ballot in November, too.

Your vote is your voice and the most direct way to hold city officials accountable for their actions.

Mark your calendar for November 2, register to vote in advance and make a plan to get to the polls.  Visit www.lwvmpls.org for more information.

This is part of series of articles about the 2021 Municipal Elections brought to you by the League of Women Voters Minneapolis.