A new brewery is hopping into the Minnehaha Ave. business mix

The colorful banners adorning the outside of 3036 Minnehaha Ave. do not lie: Arbeiter Brewing is coming to the former Harriet Brewing site. The startup brewery will bring a brand new taproom back to Minnehaha Ave. and Lake St. offering craft beer with, as their website proclaims, “a hefty dose of German influence.”

Coming from Town Hall Brewery, Herman will no doubt play around with a few bourbon barrel-aged beers. And as a silent nod to their forerunners,

They plan to have 12 to15 taps total, with four-to-six regular offerings.

“We’ll let our customers decide what our regulars will be,” said Voeltz.

“It’s important for the brewery to have an identity,” Herman added. “People should come to a place because they have a certain selection.” 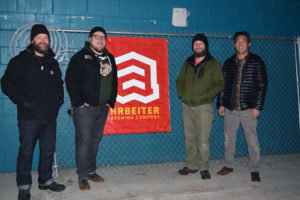 Recognizing that one person’s need for hops is another’s need for “deep, sweet, rich beers,” Arbeiter will brew styles to appeal to a variety of palates. They’ll have room for seasonals and experimental brews, and Herman is eager to get his creative and technical juices flowing. Now brewing at a brewery in Grantsburg, WI that’s open to experimentation, Herman just brewed a hazy-style IPA.

“ have a super low bitterness and a high hop flavor that makes them unique,” Herman said, describing an interaction that creates flavors that don’t happen in other IPAs. The result is achieved by using brewers’ practices that were previously unheard of—using loads of hops and doing the opposite, according to Choi, of what people are taught.

The taproom itself will be a complete remake. Right now the space is empty. Plans are to move the taproom to the front of the house and add windows to the Minnehaha Ave. side as well as a mezzanine level for more seating. They’re also going to install a huge garage door that will open out to a patio on the south side.

“Harriet didn’t have the luxury to build their taproom ahead of time,” said Choi. The “Surly Bill” that led to the taproom boom in Minneapolis passed after they were up and running. “We want it to be well thought out, just as nice as it can be. More welcoming, a little bit larger.”

They’ll likely steer away from what Herman called a “raw industrial look” in favor of creating a warmer space.

“We’d like to offer our customers a variety,” said Garth Blomberg. Some open space and some areas that are cozy, dimly lit—a place you want to be on a “cold winter night with a friend drinking barrel-aged beers.”

There are no immediate plans for packaging their beer, which means (save for occasional collaborations or releases of 750 ml bottles) the only way to try their beer will be to visit the taproom and taste it there or carry it out in growlers and crowlers.

There are also no plans to serve food. They may invite food trucks, but they also want to work with Geek Love Cafe, Gandhi Mahal and other nearby restaurants to get menus to go.

“There are great options within a block,” said Voeltz. “There’s plenty of good food.”

And while they may host occasional special events, they’ll leave the live performances to the venues down the street: Hook and Ladder, the (soon to be) Mission Room, and Moon Palace Books.

With all brewery mates hailing from other Minneapolis neighborhoods, the location is appealing on many fronts. Blomberg praised the accessibility of all types of transportation: the Blue Line, the Greenway, and Hiawatha Ave. as a major connection to Hwys I-94 and 35W.

“It’s a little apex of all types of transportation,” he said.

They also appreciate the strong sense of community in the area, where businesses all support each other. It took a village to pop up the Longfellow Craft Beverage Garden at Open Streets in July. Hosted outside Moon Palace Books passersby got to try samples from Arbeiter and Venn Brewing, DuNord Craft Spirits, Lawless Distilling, and Urban Forage Winery and Cider House.

“It was a great way to introduce ourselves,” said Choi.

Arbeiter has already collaborated on a beer with Venn Brewing that was on tap at Geek Love Cafe, and, according to Herman, collaborations with other breweries are forthcoming.

Arbeiter would also like to give back to the community, through nonprofits and charitable work.

“My community-based dream for this place, is on a Sunday morning, build a house, come back, have a pancake feed, drink some beers,” said Blomberg.

Above all, they look forward to becoming a lounging spot, a place for the community to gather.

“We very much want to be the neighborhood taproom and get to know the regulars,” said Voeltz. “I’m excited to see the transformation.”

Thirsty yet? “We’re just as anxious and eager to be open as our community,” said Blomberg.

They are hoping for a late summer opening. Those who want in early can buy a membership in the Arbeiter Union that will give them discounted beer for a good long while. Details are on their website.